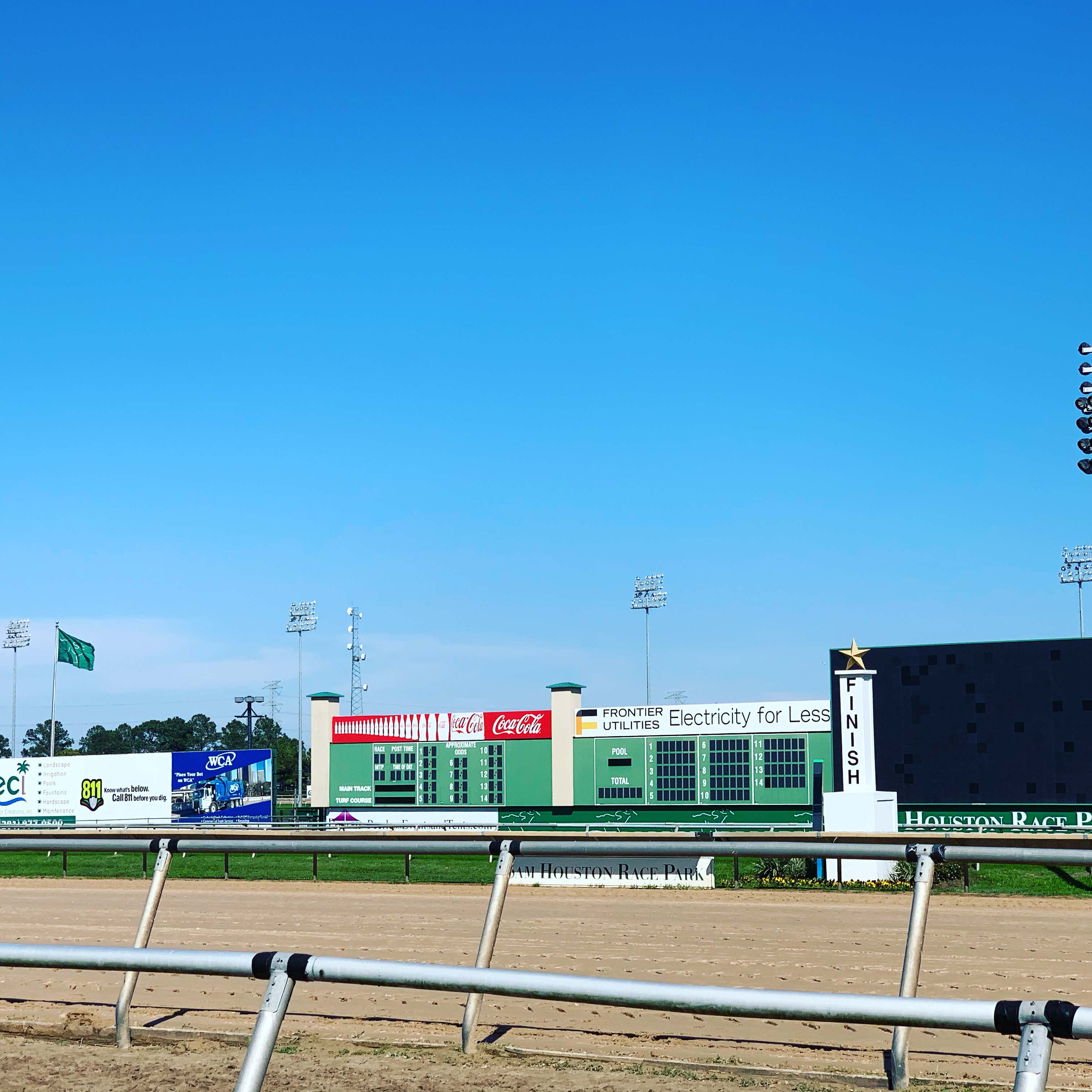 So Lo Duca and I spent the last week down in Houston, Texas at Sam Houston Race Park. It was our first trip to that particular track and my first time in Houston at all. Before I get into the racetrack, the people of Houston are absolutely spectacular. Everyone was incredibly friendly, accommodating and just genuinely nice people. Sometimes living in the Northeast, you forget that people in other places are really nice and helpful to strangers.

We got to Houston on Tuesday evening and our first day of live racing at SHRP was on Wednesday afternoon. We arrived late that morning and took a bunch of pictures, got a tour of the place and began handicapping. We put out our Pick Four tickets for the day and settled in. The early Pick Four did not go our way as it was loaded with long shot prices. The Late Pick Four, however, we did hit, for over $300, so that was a good way to end day one.

But as the race ended, we headed outside by the Winner's Circle, because the horse that had won the last race, Paw's Salty Pepper, was owned by two gentlemen we met in our hotel lobby that morning. The story was crazy. An older gentleman and his son were running this horse which they had raised in their backyard. The horse was literally a pet that they decided to try and run. These dudes were two of the most humble guys you would ever met. Just stereotypical rural Texas guys. When their horse won, we went down and talked to them and both father and son were crying. The son explained it was his father's life long dream to have a winning racehorse and now he had achieved that dream and with a horse they loved. It was surreal and showed that horse racing is not a sport reserved solely for millionaires.

After the races were over we met with Chris Griffin and Dwight Berube, two of the track executives and also incredibly great guys, and they informed us that the handle for that day was the biggest Wednesday handle the track has ever had. For that, I want to thank each and every Stoolie who played along with us or played any Sam Houston ticket. It felt damn good to play a part in that handle of $2.3M.

We returned to the track for Friday night, which was .50 cent beer night, as well as sorority night at the track. Friday night was awesome. A bunch of Stoolies turned out and we gambled, drank beer and watched racing together all night. It was a ton of fun. The handle on Friday was the third highest in the last ten years, as well.

Saturday, was much of the same, except it was Texas Preview Night. We had lots of stakes races and quality horses being run. We got to present a trophy to the winner of the Miss Houston Turf, Texas Belle. Funny side note, Paul talked me out of including Texas Belle in our Pick Three because "who the hell bets on an eight year old mare". Well, suffice it to say, when she won by four lengths, I made him apologize directly to the horse when we presented the trophy to the winning trainer, Mindy Willis.

Saturday was a great night overall, we hit the early Pick Three and Pick Four to double our money. But again, the highlight of the night belongs to the Stoolies. Sam Houston hadn't hit $100K for their pools in Pick Fours or Pick Fives and you guys delivered over that number in both pools on Saturday night. Sam Houston's Pick Five pool on Saturday night was higher than Oaklawn Park, which for those who may not know a ton about horse racing, is a very big deal. So, again, thank you to everyone who played Sam Houston with us, it was an amazing track.

Speaking of the track, I would be remiss not to say how nice the racetrack is. Much like Penn Nationals, it has great panoramic views of the surfaces and a nice selection of seating areas on the second floor. The suites are some of the most affordable in racing. You can rent a suite with food and drink for about $350, which is an incredible price to live like a little bit of a high roller at the track. Also, the buffet was some of the best food we've ever had at a racetrack. Paul couldn't stop raving about the cherry glazed ham and the cannoli cart.

If you're in Texas or visiting the Houston area, carve out a few hours and take a trip to Sam Houston Race Park. They have great food, drinks and racing. Also they have loads of other attractions throughout the year, like concerts (The Allman Betts band is playing soon) and other stuff like Cirque du Soleil. It's a hell of a time down in the heart of Texas.