The odds to win this season’s Champions League have shifted quite a bit over the last few weeks, with Tottenham being the biggest mover and shaker of the bunch (not a compliment), and this is where we are at right now: 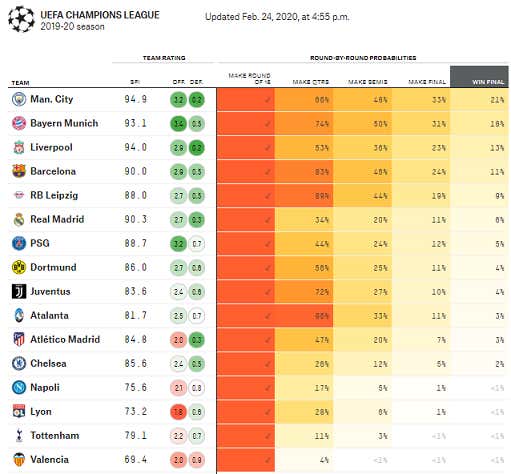 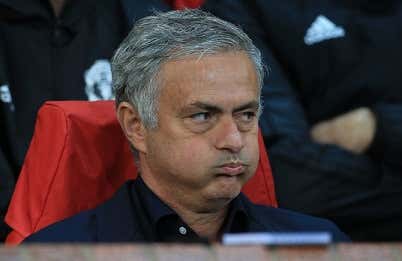 Instead, this week’s headlines will be dominated by the high-powered matchup between Real Madrid and Man City – suddenly akin to a make-or-break proposition for the latter – but let us not forget there are two more A+ battles and another deserving of, oh, let’s say a solid B (assuming Lyon doesn’t roil over and play French). Lots of incredible soccer. Plenty of incredibly bad predictions. Let’s get to it.

After some sweet melodies to get you in the mood….

Scores from last week and fixtures on deck on Tuesday/Wednesday: 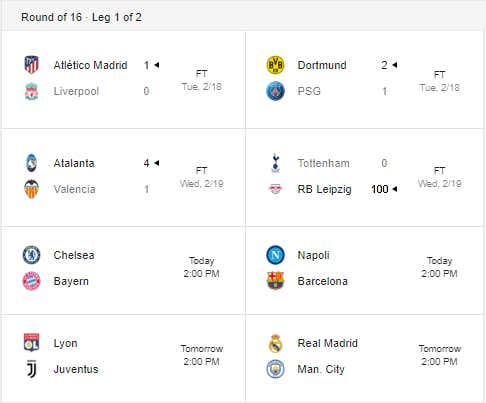 Chelsea turned out to be pretty darn good this season, which you really gotta give Frank Lampard a lot of credit for. They are a mish mash of guys who are jussssssssst a little too old and others who are just a little too green, and yet here they are in the top 4 in the Premier League and still kicking in the R16 of Champions League. Not bad, not bad at all.

The problem is they haven’t shown any indication that they can run with the truly top-end teams and come away with a result. Their best win of the season arguably came on the road at Ajax in the group stage, but even that doesn’t look quite as impressive anymore. The Blues have made the likes of Liverpool and City really work for it, but in the end they have always capitulated.

Perhaps I am underestimating them. I definitely look guilty of doing just that before the season. But Bayern has rounded into form this season and anytime an opponent has to sit a guy like Thomas Muller, Kingsley Coman or Phillipe Coutinho just because there is no room for him in the squad… YIKES. And then there is Robert Lewandowski. Chelsea gave up too many decent chances to a Tottenham team with zero strikers for me to trust this defense against a machine like Lewandowski.

Barcelona: quietly not nearly as bad as advertised… but also not vintage Barça

Two teams that are way too inconsistent to be considered legitimate contenders to win the competition, but Napoli can be extremely good on their day and Barcelona have Messi, which suggests to me that this could be a really fun game to watch.

Important reminder: Martin Braithwaite, the Danish striker who Barcelona legally stole from Leganes last week, is ineligible to play in Champions League. That leaves the Catalans a little short-handed up top and could force them to play a little more defensively than they might otherwise.

PREDICTION: Napoli have proven they can play with anybody and are not intimated by anybody, and that was before they hired the world’s most loquacious Rottweiler as their coach. 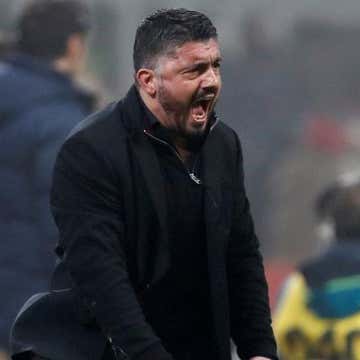 Nobody ever got rich picking against Messi

but at the risk of exposing myself as a poor person I just don’t trust Barcelona this year, and know that Napoli could get the job done if they bring their A game. NAPOLI to win 2-1. (Note: I originally went with 3-2 but dialed it back a notch given the personnel issues with which Barça will be contending.)

Two of the best teams left in the competition facing off in the R16 is great for neutrals but kinda sucks for the interested parties since they just as easily could have met in the final in Istanbul in a glorious one-off winner-take-all game. Ah well. Beggars can’t be choosers.

Zidane deserves a TON of credit for righting the ship at Madrid, who came into the season looking like a bit of a clown show but had been damn good for several months… until the sudden and inexplicable dip in form in recent weeks that saw them crash out of the Copa del Rey, draw at home with Celta and lose at Levante. Rough stretch. Perhaps it was simply a lapse in concentration ahead of Champions League? Perhaps a big fat red flag? We are definitely about to find out. Also, losing Eden Hazard to a potentially season-ending ankle injury sucks – though truth be told he hasn’t exactly been carrying his weight (other than the spare tire around his midsection) this season.

PREDICTION: City are healthy and about as motivated as any team in recent memory. That draw is looking miiiiiiiiiiiiiiiiiiiiiiiighty enticing for a first leg in which “caution” will likely be the name of the game for both teams. I had been leaning towards 1-0 to the visitors all week but sometimes you gotta get greedy. Gimme a 1-1 draw leaving it all to play for in a few weeks back in Manchester. 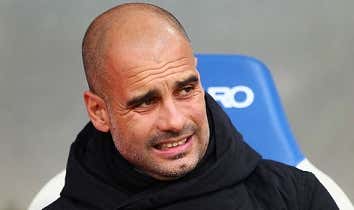 Lyon: much better for the last couple months… albeit against (mostly) agriculturalists

No offense to Lyon, because any club advancing out of the Champions League group stage does not totally suck, but I think they kinda suck. Juventus have been surprisingly sloppy in league play but that isn’t the competition this team was built for and I suspect it isn’t the competition they are most keenly focused on. Champions League is where it’s at for this club. It’s definitely why they splashed on Ronny. And there is no better big game player in the world than the Mr. Mini Samurai Man Bun himself. 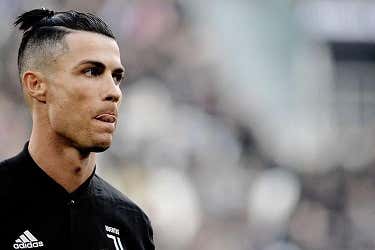 PREDICTION: if Juventus has an Achilles heel it is their experienced but aging backline, notably their CB tandem of Bonucci and Chiellini. Moussa Dembele could cause some small problems but I’m not sure Lyon will have enough of the ball to create enough chances for it to become a legitimate problem. JUVENTUS win 2-1.

So there we have it. Nothing like some Champions League knockouts to make the day fly by. Enjoy it. Revel in it. I’ll be back with a weekend preview on Friday but in the meantime let this serve as a quick reminder that we got another day chock full of Europa on Spursday…