Last year the WSOP held the biggest live poker tournament ever run. Over 25,000 entries signed up for the "Big 50", a $500 tournament held out in Vegas which ended up attracting the most players in live poker history. I ended up making a decent little run it,

before falling in 529th. A decent showing, sure, but it left me with the taste of blood in my mouth and a thirst for redemption.

As of right now, every live poker tournament series in the world is shutting down. Actually there's some high roller joint going on in Russia right now. It's all millionaires and billionaires playing so I guess they assume if you can afford to be there you probably aren't going to die from the infection, which to be honest, the Magic Johnson Theory, isn't terrible logic.

Free rooms and cheap flights? All refundable? I didn't want to looooooose money on this deal. And the WSOP is still saying it will go on as scheduled…. 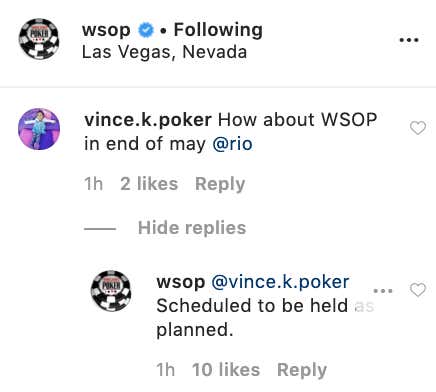 Obviously there is a lot of time in between now and then for them to cancel, postpone, etc. We will learn A LOT between now and May 30th. So if you can book everything refundable, why the fuck not? Basically freerolling a trip at this point- it either happens as planned and you get it for uber-cheap, or it gets canceled and you don't spend a dollar. The worst case scenario is it isn't canceled and I pay full price because I waited to see what would happen. If everything is 100% refundable, I'm taking 0 risk. Perfect scenario.

So hopefully I will be back in Vegas to defend my crown. I gotta say, in terms of places where corona would spread like wildfire, the WSOP at the Rio has to be the creme de la creme. Everyone touching their faces, touching the chips, the cards, sneezing, passing around the germs. It's gross when there isn't a pandemic going around. So I won't be shocked when WSOP is pushed back…but if it's not, I'll see ya there on the front lines. And then again for the Main Event. Let's just hope everyone is safe first and then that it runs. In that order.

PS: Since they had to cancel a shit ton of circuit events, the WSOP launched an online series starting tomorrow

Just a shame you need to be in NJ, NV, or DE to play. I'm considering getting a hotel room in NJ starting tomorrow to play all these events. If the WSOP is postponed and they run an online WSOP, you better believe I'll be in Jersey for that. Get rich or die trying. But the fact we can't get online play regulated and legalized in every state is a travesty. No better time than now.

Easily the best poker podcast out there.