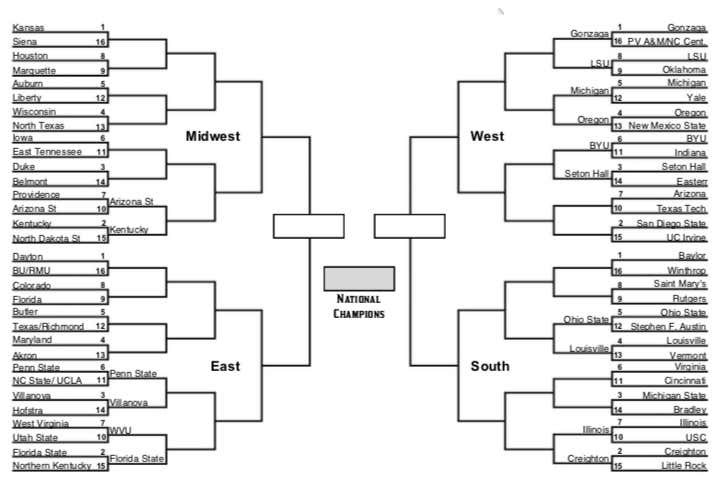 So we don't have the NCAA Tournament. Well, at least not on our TV. But we have it here on Barstool. Thanks to WhatIfSports we have a website that will simulate these games for us. Reminder this is all simulated. I'm not doing anything besides putting the teams into the website, clicking neutral court and get results. As there are less games, I'll put in the box scores it spits out too. It's just a lot when we're talking 16 games a day. Every day that we're supposed to have games we'll have simulations for that round. Today we start with half of the first round, tomorrow we'll finish it up, etc. For the sake of simplicity I'm using Lunardi's bracket. 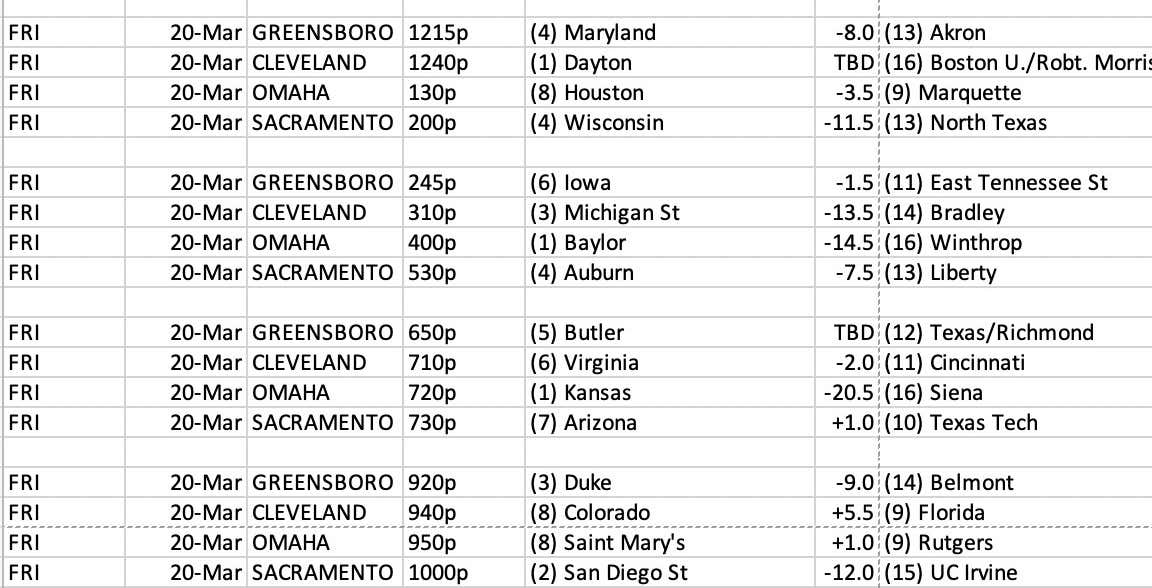 Before you start reading let's reset the scene. The Positive Vibes Only Tour has moved to just outside Cincinnati at the Lawrenceburg, Indiana casino. There's nothing like the Friday of the NCAA Tournament. The Thursday is full of excitement, you're always a bit overwhelmed at first. Come Friday you have the 12 hours under your belt. You start getting your routine down and everyone and I mean everyone is down to drink beers and watch games. You flip on the PVO Tour where you see Dave very confused that I have now joined them 35 minutes outside my house. 'Winners only. No losers.' He reminds me as the song hits. It's go time.

We get started with the early games. Yesterday was chalk, chalk, chalk. That can't be the case today. Although the way this year was in college hoops it'd almost be fitting to get a bunch of chalk. That would be the biggest surprise of the Tournament. Greg Gumbel welcomes us again as Clark Kellogg's hats keep getting more and more ridiculous each time he's on TV. Off to Greensboro we go as I sit next to Marty with the rest of the PVO Tour guys.

Fucking Maryland. I'm licking my chops ready for them to lose. Now, I don't think they'll actually lose in the first round. That's not the Maryland special. The Maryland special is winning a close game in the 1st round and then losing in the Round of 32. Unless they play a double digit seed, they can't get to the Sweet 16. Maryland actually controls this game as Mark Turgeon blacks out for a second and plays his best lineup the majority of the time. Weird how that happens.

We get the No. 1 seed in the early spot. I don't know about you guys but I need these games to be overshadowed when we know there will be other choices. We just don't get UMBC/Virginia, well, ever. Dayton is a bit nervous but Obi Toppin is NPOY for a reason.

Things are really cooking now. Big Cat stands up to the applause of the entire crowd. 'The Badgers are back' he screams. You would think by being wildly successful and watching sports for as long as he has he'd learn. He doesn't. It appears. Brad Davison takes a bullshit charge on the first possession of the game and Big Cat rips the jumpsuit off.

I'm fuming about the charge call. 'BAN THE CHARGE' I quip, understanding my role of letting the other guys talk and just being the basketball guy - sort of like Stat Guy back in the day just hanging out. Dave starts going on about how Michigan is the superior Big 10 program and carrying the weight of the conference as the score is 6-2 North Texas. Brad Davison has taken 2 charges and may or may not have had a dirty play. Despite it being a slower paced game, North Texas has one of the best shooting teams in the country and just lights Wisconsin up from three. The game is winding down. A minute to go and North Texas is up 9. It happens again. 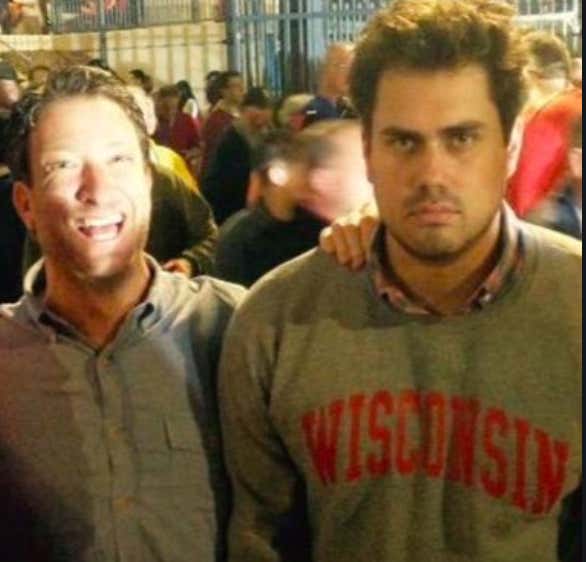 'POSITIVE VIBES ONLY' Brandon Walker yells from the couch. He's much larger in person than I imagine. Just a massive human being that I've gotten lost talking old school hoops with. We reminisce about the 1996 Final Four. We talk about the Mississippi State-Kentucky football rivalry. 'Luka Garza, gotta trust an Italian' Marty says. I don't have the heart to tell him he's actually from the DC area and is not Italian. It's too late anyways. Marty's new betting system has him trusting Italian guys.

There's a weird *ahem* vibe for this game. Michigan State just hung out with a late push and three by Cassius Winston and it feels like we're due for mayhem. Baylor is up just 4 at half. 'Eh they have to pull away in the second half right?' We all sort of ask, afraid to answer. Baylor's offense gets stagnant. Winthrop is getting up and down the floor, attacking. We're at the under 8 and it's all tied. Folks, buckle in we might have something here. The game keeps going and Baylor misses its next 6 shots. Winthrop hits three threes. Holy shit it's going to happen again. This year truly is crazy.

The entire discussion during the Auburn/Liberty game is about what's going on with Winthrop and Dave blasting Pilot Pete and Madison. Speaking of Madison

I lead the group wrong here. Hand up that's on me. Listen, it's Blue III's last NCAA Tournament, even if the NCAA won't let him in the arena. You have to win a NCAA Tournament game during the last trip for your dog mascot. Butler just lays a complete egg though. Never trust mascot games. Never trust them.

Here it is. The game everyone was waiting for. Two teams that are known for playing slow, in the 50s. 'This is going to be so boring. Under city' pretty much everyone screams. Virginia is one of the hottest teams in the country somehow. In an alternate universe they get to the ACC title game playing all 2 point games. However, Jarron Cumberland and John Brannen are now best friends and Cincinnati gets a win in a down year.

What's that? Clem out of the clouds! The man loves Siena so much he leaves his daughter Siena to come to Cincinnati and hang out with everyone. He arrives through the crowd let Wrestlemania. Unfortunately all that's played here is this video on the big screen as the game gets cut out (as I write this Cincinnati is getting a real life tornado warning during a quarantine so I'm running with it)

'Alright suckbags. Time for my Duke Blue Devils' Marty screams. Instantly Big Cat, Dave and I team up. Positive Vibes are out the window when making fun of Coach K. He instantly tries to coach Belmont as they take an early lead. He just wants to get ahead of the story. 'You suckbag rat dogs better not let Duke get hot. Tre Jones should be national player of the year' Marty keeps chiming in as he finds a ping pong ball and tries to toss it into a cup over and over again. Duke wins and Coach K instantly screams at Duke fans for not being loud enough. He forgets he's not in Cameron.

We're starting to play comeback city here at the sportsbook. Everyone knows you make your money back late night betting against the biggest failure in college hoops this year. Florida, a 9 seed, was supposed to be a title contender. Instead Mike White screams whenever they try to push the floor. Andrew Nembhard can't hit a shot. Kerry Blackshear is frustrated. We all cash Colorado with ease and nachos arrive. Smiles are on everyone's face and we even get a high five.

Your family, your religion and Rutgers basketball.

We have mayhem today. A 16 seed wins, we get a 12 and 11 seed advancing. Money is flush as we all cash a bunch of bets. It's a good day and sums up this year perfectly. The first round is complete and it's been nearly perfect. One day of chalk, one day with mayhem. 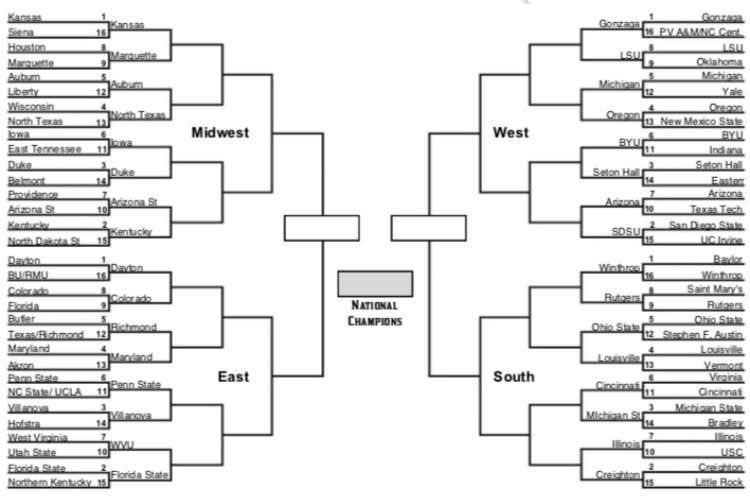