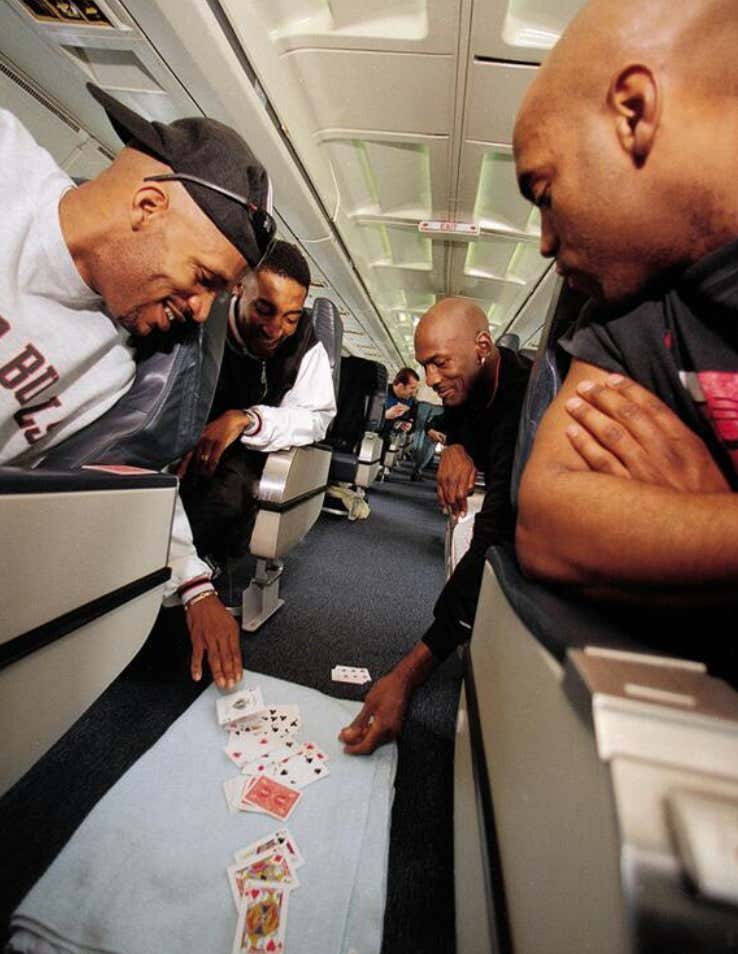 Everyone knows this picture of the Bulls playing cards on their team plane. It's innocent enough, right? A few teammates- Harper, Pippen, and Jordan playing cards on a folded up blanket in the airplane aisle. But now we know there is likely much more to it than meets the eye.

Everyone knows Michael Jordan is one of the biggest gamblers there is. He'll bet on anything, and if I had to guess, just a wild guess, he's not one to make small wagers.

We know a few more things too- the golf course is the mecca of gambling. Maybe you're not a poker guy but Phil Ivey, Daniel Negreanu, and the high-stakes poker world regularly bet 6-figures per hole. Jordan golfs at the same clubs in Vegas as them. We can only imagine the stories.

And finally we know Gilbert Arenas. What does Gil have to do with this? Gilbert infamously brought a loaded gun into the Wizards locker room and threatened to blow Javaris Crittenton's head off over some gambling debts from the team plane. And that was Gilbert Arenas and Javaris Crittenton and something like $20k. I can only imagine the amount of money flying on the Bulls team plane. No wonder Scottie Pippen wanted to be traded, MJ probably had him on food stamps after a cross-country flight.

It goes on and on. There are probably so many layers to Jordan (and the rest of the Bulls, to be fair) gambling. I don't think the documentary will ask MJ straight up if his "retirement" to play baseball was actually a suspension from the NBA...but then again, why wouldn't they? Don't they sort of have to ask? Maybe? Jordan doesn't have to answer...but maybe he's ready to come clean (if it's true, of course). I think it's 100% true, by the way. But that's all part of the MJ aura. How much was he gambling? How much was he down? How involved was the Chicago mob?

There's dozens of more questions we could learn the answers to from a gambling episode. Some people say the "flu game" was really a hungover game. How many times did he go straight from the casino to the arena for practice? And again, maybe we will get some clues about that retirement.

I haven't looked at any spoilers (if they are even out there) so I'm just putting my hopes, wishes, and dreams into the world and hoping they come true. I think we'll get a little...let's hope they don't blue ball us though. Give me alllll the stories.