One week in the books. What do we think? I heard some complaints about no fans and the consequent lack of “atmosphere” and, I mean, sure I get it. But when you are stranded on the side of the road in the middle of the dessert at midnight in a hailstorm with hundreds if not thousands of thousands of murder hornets on the loose… are you really gonna say “thanks but no thanks” when someone stops and offers to give you a ride in their 1994 Toyota Camry station wagon just because you would prefer to ride in a Lambo? 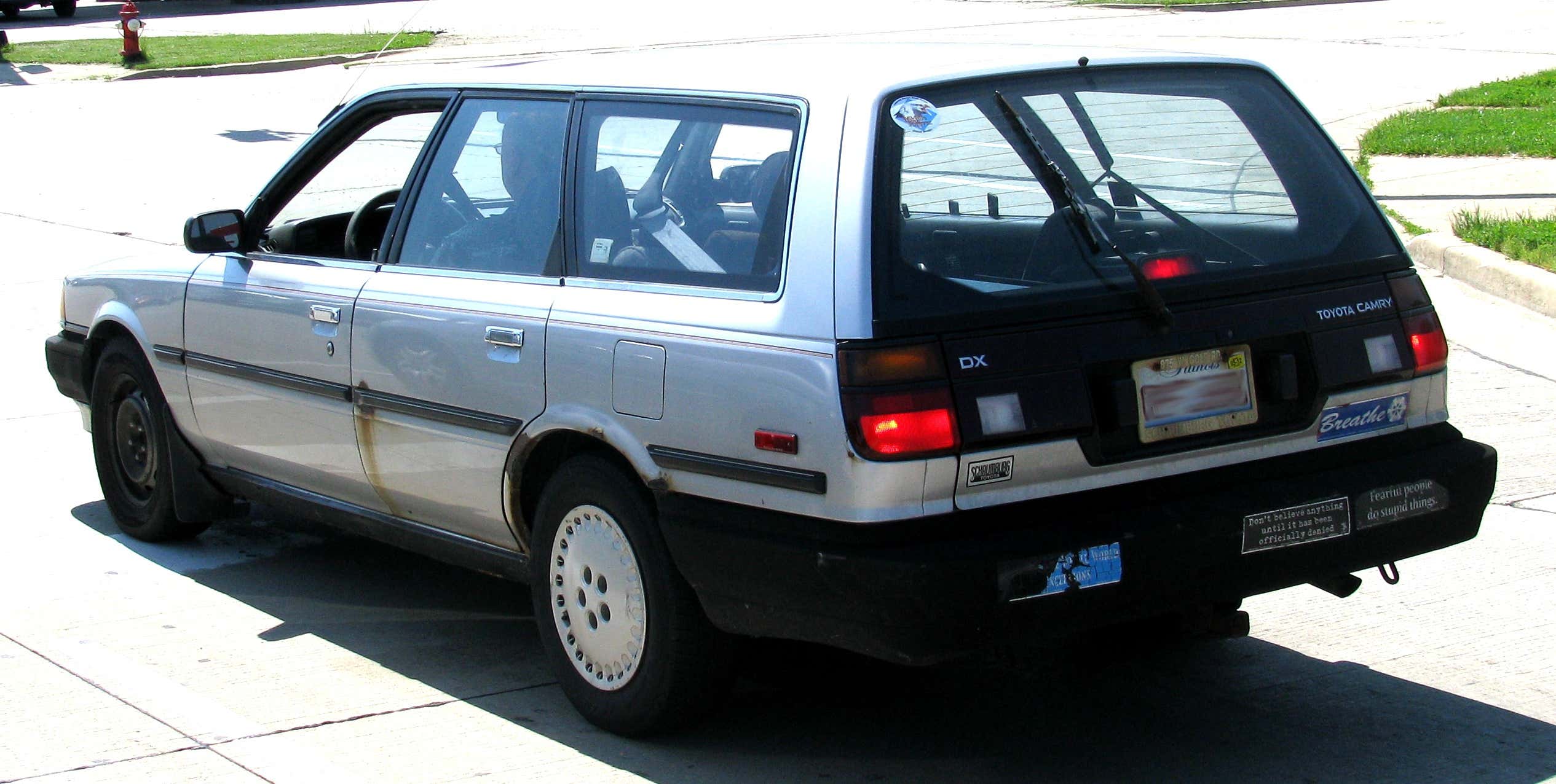 NO, you are not. So get your priorities straight, do less hatin’ and more appreciatin’ that we actually have some live soccer to help distract us from this coronavirus hellscape, and let’s go get our minds right and prepare to win some moneys watching and dabbling on this weekend’s games…

[Reminder: in case you missed them but want a jumpstart on picking a club to love and cherish until death do you part, here are the quick and dirty backgrounders on the BUNDESLIGA and K-LEAGUE.] 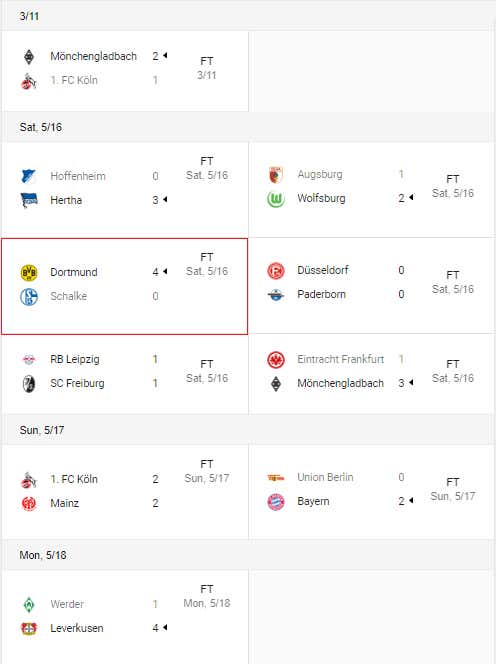 Before we dive into the games ahead, some observations from the first games back after the long layoff:

1. If you were hoping for a ton of goals (like me)… you were disappointed

2. If you thought all the couch time might be a bit of an equalizer and we would see a bunch of upsets (like me)… you were sorely disappointed

So keep that in mind when you are considering where to “invest” the recently withdrawn funds from your 401(k).

As for where things stand, here is the table: 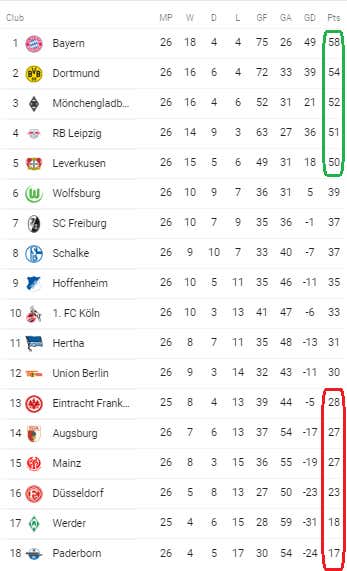 TITLE RACE: not much changed last weekend as all the clubs within shouting distance of the top came away with wins – with the lone exception being RB Leipzig, who settled for a rather fortunate home draw after a late goal by Freiburg was chalked off thanks to everybody’s beloved savior VAR. 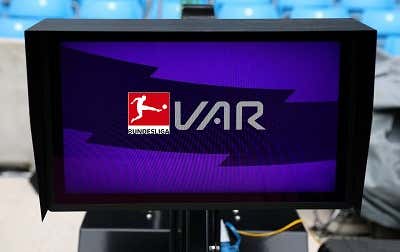 As a result Gladbach jumped RBL into third place while Leverkusen gained ground as well. The same four-point gap between Bayern and BVB at the tippy top remained in place.

RELEGATION BATTLE: Similar story with not much movement as Paderborn’s draw away to Dusseldorf brought them one point closer to Werder while Mainz came back from down 0-2 to draw with Cologne to maintain the four-point gap on aforementioned Dusseldorf. 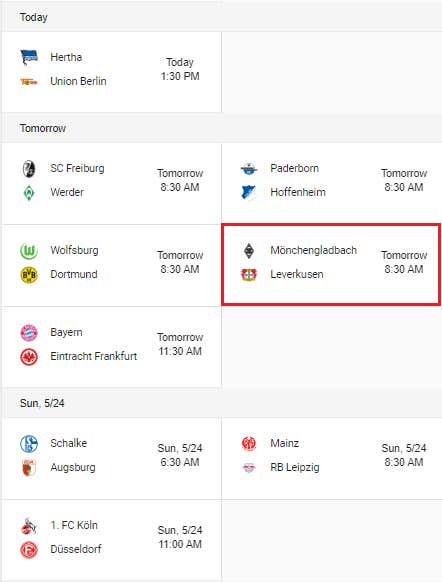 SAFE HARBOR STATEMENT: I try to offer some insights and it physically/emotionally pains me when my Premier League picks are bad (the only silver lining being that I assume most people faded them and got rich). I am putting maybe 5% as much “effort” – eg, time and thought – into these Bundesliga picks and could care less if I’m wrong. I wouldn’t really know what was going on even if we weren’t fresh off of a once-in-a-generation (god willing) pandemic that is going to have god-knows-what kind of impact on teams form.

SAFE HARBOR STATEMENT #2: quick reminder that there will be no fans in the stands for any games going forward… so the “home field advantage” is probably going to be mitigated to a certain extent.

Biggest game of the weekend from the perspective of a possible title race. Both clubs looks remarkably good in their first games back last weekend and, along with Dortmund coming out flying and Bayern never getting out of second gear, could be a good omen for keeping things interesting for the next couple months. As for the game itself, it would not be that farfetched to call it a “darkhorse” eliminator for whoever loses if someone does… and perhaps for BOTH if nobody take all three points. Based on how they looked I love goals – gimme that OVER – and while everybody says that there is no such thing as a home field advantage anymore I’m calling bullshit on that given Gladbach’s ingenious campaign to fill seats: 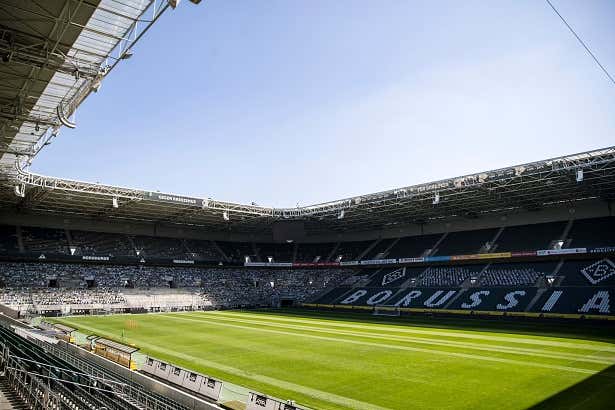 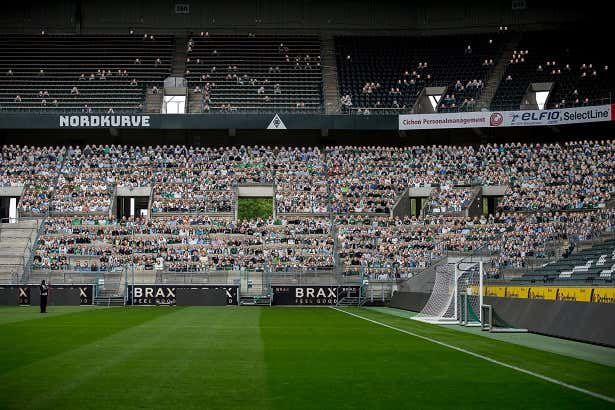 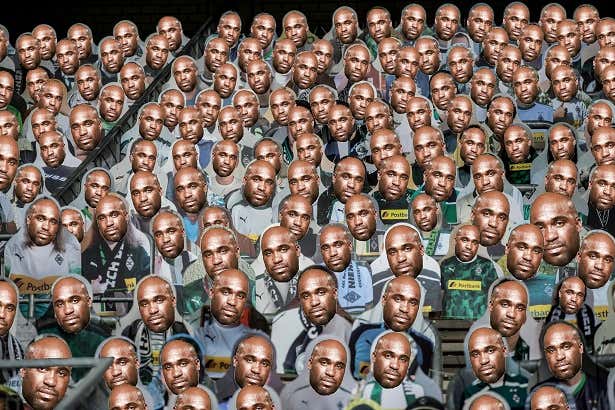 I don’t care how much of a seasoned veteran you are and what soccer wars you’ve fought in, walking into the stadium and coming face to face with that in the stands is gonna be intimidating af.

BERLIN DÆRBY! Big bad Hertha sit just one point ahead of their comparatively tiny local rivals at the moment, but they did look pretty damn good on Saturday in rolling over Hoffenheim – on the road no less (not that that means as much as it once did and will someday again soccer god willing). Union were their normal stout selves against Bayern, and even had some early chances that were unfortunately squandered. Call my a big softy if you must, but I like the scrappy little guys to get something out of the game.

RIVALRY ON THE RHINE! These two clubs are long-time nemeses so while the game may not otherwise mean a ton for Koln, who would need to make moves to catch the likes of Volfy/Freiburg/Schalke for a European spot, you better believe they will be up for it against a Dusseldorf side that it is desperate to get out of the relegation playoff position (16th place). The latter won the first encounter earlier this season but based strictly on what I saw last weekend Koln looked like they are in MUCH better form.

So there we have it. Soccer is back and it may not be as beautiful as before but it is pretty enough that I ain't kicking it out of bed.