Writer's Note: Barstool Chicago brought me on as an intern last season after years of independently blogging about my NFL bets, and now I'm sprinkling in blogs until I return full-force for Sundays in the Fall.

This week, 78 players were announced on the 2021 ballot for induction into the College Football Hall of Fame. I care about only one name: Sebastian Janikowski.

From birth, into college, and through the NFL, the guy was a certified unit with Wódka oozing out his pores. 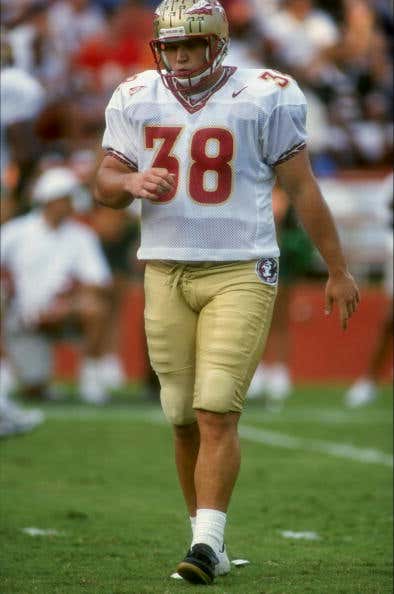 At FSU, he used every bit of his diesel Polish body to launch piss missiles through the uprights, and he became the only man to win the Lou Groza Award (nation's top collegiate kicker) in consecutive years. The Raiders drafted Janikowski 17th overall out of Florida State in the 2000 draft, making him the first kicker selected in the first round of the draft since the 70's. It hasn't happened since, but that's not Janikowski's fault because he was one of the best to ever do it. Here are some quick NFL stats:

In addition to having a cannon for an appendage, the man could booze with the best of 'em. Before he figured his shit out around age 25, he scrapped in bar fights, passed out bloodied in nightclubs, and unfortunately hopped behind the wheel while blitzed a few times. That's the kind of behavior that lands you a tattoo on your left leg that reads "pound kicks, fuck chicks."

Ok, maybe he's a 42-year old beloved husband and father of three who has gracefully moved on from his party days and doesn't have that tattoo, but in our minds he will forever be a big fat party animal with a BAC consistently hovering around 0.12%.

As a quick sidenote, Janikowski also laid the blueprint for accumulating mass in the face. Where would Big Ben be if Seabass had not bravely paved the way?

From a betting angle, all I can say is that Janikowski was a cold-blooded killer when it came to covering spreads. If a line hinged on a last-second kick, Janikowski always pulled through. When I was on his side, I counted my money before the ball was placed, and when I bet against his team, I'd turn off the TV before the snap and wallow in self-pity.

Wait, am I an NFL blogger mostly citing Janikowski's NFL experience to argue his place in the College Football HOF? You betcha.

…then you scratch and claw to ensure this man gets every post-career win possible.

If you are a College Football Hall of Fame voter reading this (zero chance), you know what to do before voting closes on July 7th. Here's nine fucking minutes of kicker highlights: