First things first, polaroid cameras are awesome. As are those cameras you buy that you wind up between each picture. I believe they are called disposable cameras. Do you remember when you'd go to a wedding and there would be a disposable camera on each table? What a great idea. Now it's all hashtags and what have you, but I love the idea of bringing back the disposable camera. It's just a shame you never get to see the pictures.

But anyway, Polaroid cameras are awesome. They print the photo right there, you shake it around like Outkast taught you, and then you can look back on the memories, holding the pictures in your hand. I love physical copies of everything. I have long said we gave up on buying CDs and DVDs way too soon. Having a collection is so much better than digital. And well, it seems the market agrees. What immediately happened after Glenny announced his newest purchase? 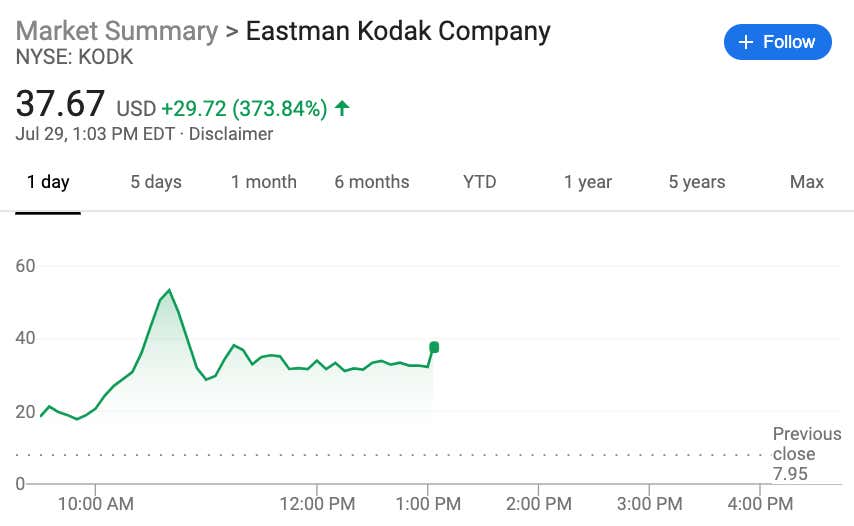 Incredible. One little tweet from the Brass of Burgerville and Kodak's stock goes up nearly 400% in one day. I don't know what PENN is doing but if Glenny isn't CEO by sundown I gotta wonder about their decision making.

All I know is he better tell me before he decides to part the Red Sea again. I want VERY IN on this insider trading shit. Imagine just casually buying it at $2.22 ho hum ho hum

So is Glenny an actual billionaire now? Wouldn't surprise me. Kid don't miss.