Welcome to your Weekend WNBA Betting Guide, where we'll be betting and (hopefully) winning on the WNBA all season.

Do me a favor for a second. Pause your women’s hoop hate until you finish reading the blog. Give me just two minutes.

Sabrina Ionescu, who I wrote about last weekend having a rocky WNBA debut, righted the ship in her second game when she balled out for 33 - 7 - 7 in a 93-80 loss to the Wings.

WNBA Overs are kind of a legend; 7 of the first 8 games this season hit the over until they COOLED off big time last night, with all 3 games going under.

I think there’s a simple explanation for this anomaly (and it’s not the nasty conditions of the WNBA Bubble.

Fatigue from playing three games in a week and the books jacking the over by 7-10 points in some cases is the easy explanation. So in this case, I like both Indiana v Dallas and Las Vegas v Phoenix to go under tonight, but I only recommend the Vegas/Phoenix game.

If you're thinking of a three play parlay, I'd consider adding Dallas -3 to the above two, but I’m not in LOVE with it.

I'll update this blog over the weekend, and as always, you may hate the WNBA with the same fire that you hate your ex who cheated on you with that D1 football player. But the difference is, these ladies can make you money. 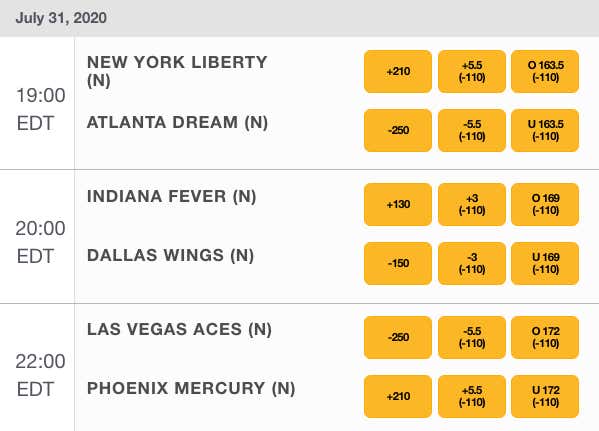 There are bad beats and then there is bad luck.

Yesterday I got both. I had the New York Liberty +5.5 against Atlanta, looking for emerging star Sabrina Ionescu to lead them to their first win of the year. Everything was going just fine until this happened in the 2nd quarter:

Ouch. Ionescu was taken for x-rays which, fortunately, were negative, although results of the MRI are pending.

Sabrina had 10 points on 4-5 shooting and the Liberty looked in command, holding a first-half lead even after she left.

A star player being injured is bad luck. What happened next is a bad beat.

With 8.1 seconds left and Atlanta leading 84-78, the Liberty’s Kiah Stokes inexplicably chucks up a 25 foot shot; but Kylee Shook gets the offensive rebound! And the put back … misses.

On the WNBA Over Beat, we took unders yesterday, if you remember. And as I suspected, the Dallas v. Indiana game hit the under (the Wings also pushed -3). But the Vegas v Phoenix game was a damn track meet, obliterating the Over by 15 points. Oh well.

Saturday’s slate of three games has some interesting match ups.

The league leading Washington Mystics (3-0) play Chicago as a -5.5 favorite. I like them to cover, and pretty easily at that. The o/u ranges from 174.5 to 176; def think about taking the Over in this one.

The other game I like is Seattle Storm v. Los Angeles Sparx. Look for the Storm to bounce back after a dismal showing in their previous game and cover the -3.5. The o/u in this game fell from 170 on open to 168.5 which I think might still be too high.

The third game today is Minnesota v Connecticut, two kind of streaky, uneven teams. Seems weird that the 2-1 Lynx is a +2 underdog to Connecticut considering there is no home court advantage in the bubble. Kind of a weird line. I’m taking the Lynx +115 on the ML. You might consider the Over on this game too (174.5 on open).

Good luck out there, and remember bad beats are just a part of life.

A profitable day in the WNBA! As I thought, the Lynx being +2 against a winless Connecticut was easy money and the ML came in at +115 for a nice payout in an easy 9 point win. After dominating most of the game, the Seattle Storm with Sue Bird on the bench nearly shit the bed (LOL), blowing a 15 point lead late (8 minutes without a basket OUCH) but holding on to cover the -5.5 against Los Angeles to cash -110. The only loss on the day was the Mystics, who blew a lead against Chicago and then missed a late bucket to force OT and lost 88-86 despite being -5.5 favorites.

The Sabrina Ionescu-less New York Liberty play Phoenix today in the early game, and I kind of low key think Phoenix is trash. They’re 1-7 in their last 8 ATS and I look for that trend to continue, as they are giving away WAY too many points (started at -7.5 and moved to -11 as bettors JUMPED ALL OVER THEM) even against a team with as many injuries as the Liberty. The Over (176.5) seems high so I’m staying away from that. Books are trying to balance out the slate of WNBA early season overs so until some balance is restored to the lines, I’d look more under than over for the moment.

The second game on the slate is Atlanta v. Indiana. Indiana is one of the hottest teams to bet of late, going 3-0 ATS since the restart. but the line on this game is ALL OVER THE DAMN PLACE, and depending on where you bet you can get Indiana anywhere from -1 to -2.5. The Over/Under also has a wide gap; Bovada has it (as of 11:00 a.m) at 169 while other books have it as high as 176.5. With this much confusion from the books, I’m staying all the way away from this game.

The third Sunday game is Dallas v. Vegas, which should be a fun game to watch. Vegas is a -6.5 to -8 point favorite, depending again on where you bet. Confusing as hell. I’ll take -6.5 but not -8. There haven’t been enough games to tell about the “middle teams” like Dallas… like is Dallas decent or no? We’ll know more about these teams in a week or so. The O/U is 175.5 (give or take a point) and Vegas is historically a good over bet (14-5 in their last 19) so that’s something to look at.

A nice slate of games to finish out the 2nd weekend of the WNBA. Go stack some cash and we’ll see you here next Friday!