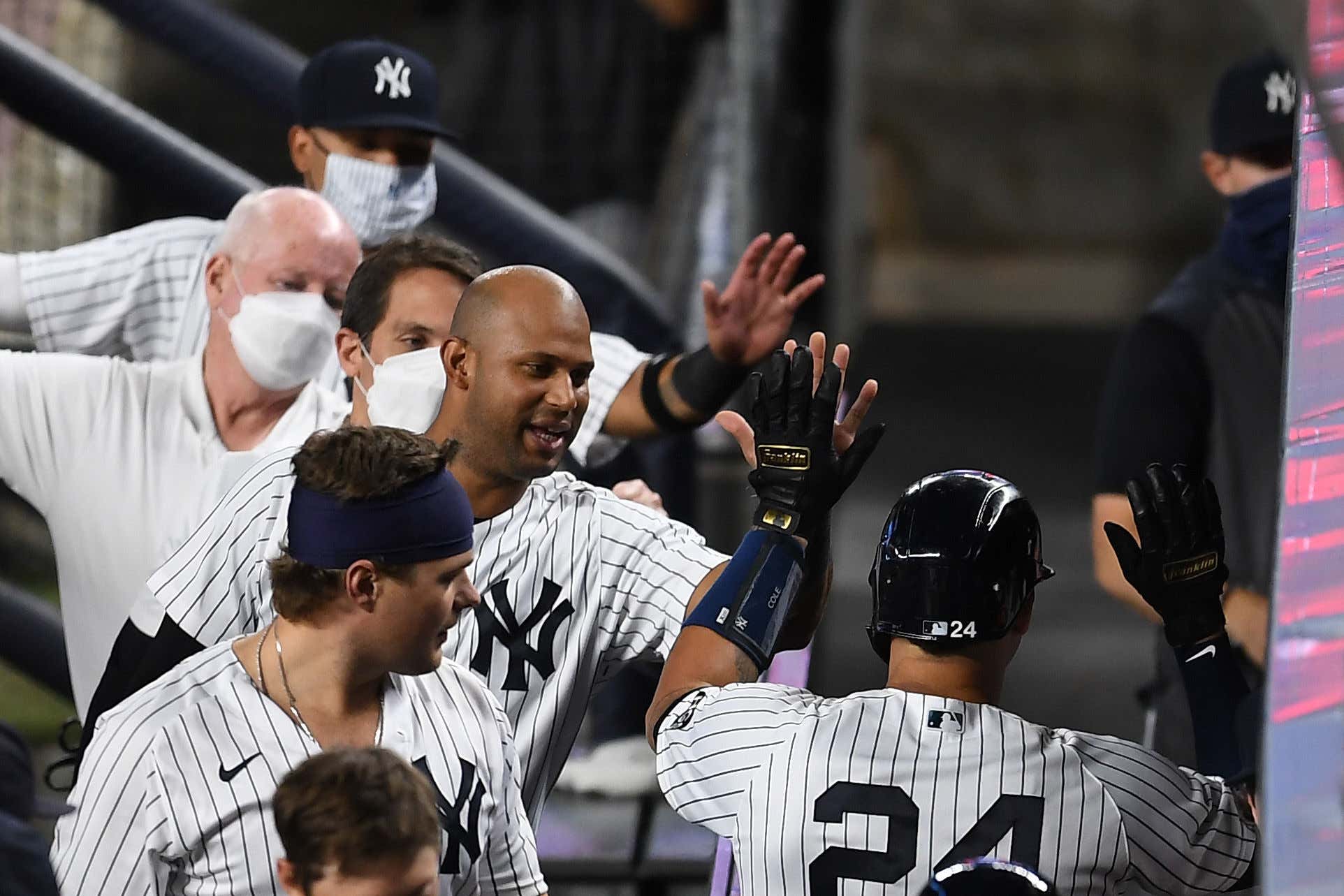 It truly pains me to say this, but watching the Yankees beat up on the Red Sox doesn't have the same feel as it used to. I still had an absolute blast watching the Bombers shit pump the Sox, but a win like Friday night should be expected at this point. When you've taken 18 of the last 23 games against someone it's tough to call that a rivalry. Gerrit Cole went up against a combination of Colton Brewer, Austin Brice, Ryan Brasier, Dylan Covey, Brandon Workman, and Marcus Walden. The result? A 10-3 ass kicking. The 2020 Boston Red Sox are a collection of baseball players who have no business winning any kind of game. On the flip side, the Yankees are a well oiled machine. Friday night they handed the ball to their horse and rode him to freedom.

This by far was Gerrit Cole's best stat line as a New York Yankee. He was efficient and effective as he dispatched the Red Sox.

I still think his start against Tampa Bay was the best he's looked stuff-wise, but I'll certainly settle for this performance every time 45 takes the ball. Cole improved to 4-0 on the year, and the Yankees remained undefeated in his five starts. Gerrit Cole continues to be everything the Yankees could have asked for and more. It is a delight seeing him pitch in pinstripes. Something I've dreamed for years has come true before my very eyes. You don't really get to say that often do you?

I'm going to do that thing now where I dump all of Cole's filthy pitches from Friday night. Who needs a late night video with Layla London or Kelsi Monroe when you have this to look at.

There was something up with J.D. Martinez Friday night and by that I mean he had absolutely no interest in hitting the baseball. Zero. You could make an argument this was a silent protest for how much of a dog shit a team they assembled this season.

Some of his swings against Cole made him look like he'd never picked up a bat before. Considering I hate him and he hates me that certainly brings a smile to my face.

When you have 45 throwing the way he did you're probably going to win. When you back up that performance with a 10 run onslaught you will actually never lose. There's a reason the Yankees were -340 in this one. Vegas knew this would be bad. Still, if you took the Yankees moneyline, runline, alt line, first half, team total over you're waking up Saturday rich. They're a wagon.

With Aaron Judge and Giancarlo Stanton on the injured list, it's time for some of the struggling bats to snap out their funks and step up. I'm looking right at you Gleyber Torres and Gary Sanchez.

How did Gleyber fair on Friday? How's 4 for 4 sound, including a two run double to get the Yanks out in front? Sounds fucking good to me.

The Yankees shortstop has his average back over the Mendoza line (which is nice for optics) and appears to be finally getting passed whatever the hell was troubling him to start the 2020 season. This team needs Gleyber back to being a menace at the dish. With the two big boys out of the lineup, he should be slotted in as the everyday two or three hitter, not five or six. We're hopefully getting there.

Another guy who might be figuring things out is Gary Sanchez. Coming off a homer in Wednesday's game, the Kraken showed up again and sent this titanic shot 457 to right center.

I mean holy moly did you see where that ball landed? Quick replay of the pimp job because Gary pimp jobs are awesome.

Get hot. Stay hot. It's August 15th, time for Gary to take over.

Mike Tauchman got the start (as he always should) and collected another three hits. His average sits at .343 as he continues to be the Sock Man. With Judge and Stanton out, Tauchman will be a true every day outfielder with zero worry of being benched. Clint Frazier will also be getting the biggest opportunity of his career over the next few weeks. I think these guys are going to seize this opportunity and continue to help win this team baseball games. The depth in this organization is ridiculous. Imagine losing two superstar outfielders (or whatever you wanna call Stanton) and replacing them with studs like Tauchman and Frazier? Are they equal? No, but they are capable of producing at an above average level. It's their time to shine.

The Red Sox actually have a real starting pitcher going Saturday night in Nathan Eovaldi opposed by James Paxton. Let's hope Big Maple found something in Tampa and can build off of it.

If you want to catch the highlights from Friday Night's Electric Chair livestream with myself, Carrabis, Tommy Smokes and Mush you can watch here — presented by BODYARMOR: