Tough week for most of the Premier League as City and United crashed out of European cups ensuring that England – one year removed from DOMINATING both UCL and UEL – came up about as big as a fart in a bathtub.

More importantly, though, last week’s back-to-back-to-back-to-back single elimination Champions League quarterfinals was some of the best non-World Cup soccer I have ever witnessed. I know it’s a one-off situation because of the Rona. Money and logistics but mostly money will ensure we never see this sort of thing again. Doesn’t mean we can’t enjoy tf out of it while we can though. Just a shame that CBS didn’t make it more broadly accessible to more casual fans:

It is what it is though. Streaming is inevitable. Hopefully CBS at least continues their solid coverage.

But enough about old stuff. Time to focus on what is ahead. Let’s start with some babymaking music to get in the mood:

All four games brought the thunder – each for different reasons.

Those results leave the bracket looking exactly how we all thought it was going to turn out with nothing but German and Farmer league teams vying for the richest, most prestigious title in all the land. 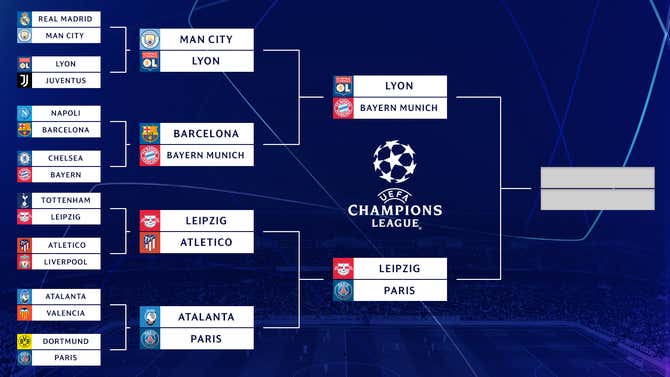 Recent form
RBL: Solid showing against a determined Atleti side… Upamecano was huge (bouta be bought for a billy) and Tyler Adams saved the day
PSG: Neymar was incredible at everything but finishing yet it was Mbappe’s arrival (60’ in) that turned the tide vs Atalanta… other than those two the team looked lackluster

This feels like a much more evenly balanced matchup than the bookies are predicting. Both teams have consistently created a ton of chances this season but if the Atalanta game was any indication PSG’s underrated defense can slow even the most balls-to-the-wall offenses. Keep in mind that RBL will (again) be without their most dangerous striker in Timo Werner who already left for Chelsea. That may end up catching up with them today. My heart is all in on RBL, especially if Adams gets the start, but that sounds unlikely so I’m deferring to my head…

Bayern have been blitzkrieging all over everybody’s face for months now. From an offensive perspective they are as scary as scary gets. It feels like someone new steps up and dominates every game. Last time out against Barcelona it was Thomas Muller who was everywhere doing everything – albeit with plenty of help from others, notably Alphonso Davies. But it just as easily could be Lewandowski or Kingsley Coman or Ivan Perisic or Philippe Coutinho or Serge Gnabry (just ask Tottenham fans about the last of them). Point being, they are stacked. That said Bayern are a bit vulnerable on defense. Kimmich and Davies love to push forward leaving plenty of space to attack on counters – something Lyon did to great effect against City – and if Bayern fans aren’t at least a LITTLE bit nervous about guys like Maxwel Cornet and Moussa Dembele running at Jerome Boateng then they haven’t been paying close enough attention.

From a purely betting perspective, I’d probably throw a shekel or five on the Frenchies who have shown they are comfortable weathering pressure for long stretches and can (and did) make their exceedingly rare looks count against City. I also think that Bayern may have blown a bit more of their load against Barcelona and could be ripe for a comparatively pedantic performance. Even so, they are just too damn good.

Quick reminder that MLS is moving forward with “Phase 1” of the rest of their season, which involves playing a modified schedule (NOT in a bubble) that is heavy on mouth-watering matchups. Is it going to be weird? Yep. Is there a chance some positive tests trips things up for some or all of the league? Yep. So might as well keep your fingers crossed and enjoy it while we can. 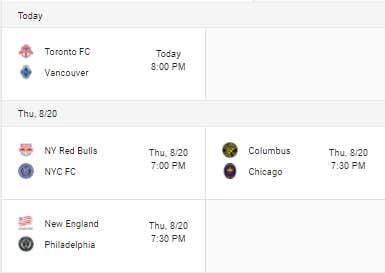 So there we have it. Another big week. I’ll be back with a preview of the Europa League final and weekend MLS matchups. Not like I got anything better to do these days. In the meantime stay safe out there kids. xo