So had the WNBA blog set up to go yesterday, put it in the submissions, and yep. Forgot to hit submit. Sorry about that, won’t happen again! I was coming off a 2-1 Thursday and ended up last night 1-2 (had the Seattle Over and just missed the Lynx Over), so we’re 3-3 coming into the weekend games.

The first game on the slate is the surging Connecticut Suns vs the Indiana Fever. Indiana is 1-5 ATS in their last 6, while Connecticut is 5-1 against Indiana ATS in recent games. Alyssa Thomas (F) is questionable while Jasmine Thomas (G) is doubtful for the Sun; Lauren Cox (F) is out for the Fever. The line opened with Connecticut -6 (O160) before moving up to -7.5 (O160.5).

The second game is the Las Vegas Aces vs the Atlanta Dream, who have played better of late, winning 4 of their last 6 ATS. The total has gone over in 4 of the last 6 Aces games, so that’s something to look at. Dream center Kalani Brown is questionable, which would hurt their defense. The line opened with Las Vegas -10.5 (O169) before moving slightly to Las Vegas -11 (0169).

The final game of Labor Day Saturday is the New York Liberty against the Phoenix Mercury. The Liberty have been the worst team ATS in the Wubble but have righted the ship somewhat of late; Phoenix is 4-1 ATS in their last 5. The Over looks good in this game. Kylee Shook (F) is out for the Liberty; of course the Mercury are without Brittney Griner and Nia Coffey (F) and Sophie Cunningham (G) are questionable. The line opened with Phoenix as a -12 (O164) and stayed there, although the over changed (0166).

Of course, I'll update this blog tomorrow (and the holiday Monday too), and although you may hate the WNBA with the hellfire you have in your soul for that girl you took to that fancy dinner only to watch her text her ex all night -- remember, these women can make you money

A solid 2-1 last night with a BAD BEAT (lost Las Vegas -11 game by a single point which kept me from sweeping the board) but it means we’re getting on a roll.

The first game of Sunday is Dallas vs Washington, with Washington opening as a -3 (O165) favorite before the line settled at -1.5 (O165). The Mystics played in the championship game last year then cratered this season, but they’ve been playing better (not exactly well) of late. The Mystics are still 3-10-1 ATS and Dallas is 4-2 ATS of late. Washington doesn’t score much (4 of 5 unders last two weeks). No recent injuries affecting this game and both teams are fighting for one of the last spots to get into the playoffs.

The Minnesota Lynx take on the Seattle Storm in what should be a very good game. Seattle opened at -6 (O161.5) and the line settled at -6.5 (O161). Seattle, despite being the best team in the league, is just 1-4 ATS recently, while Minnesota is 4-1 ATS. Looks can be deceiving. Seattle is slowly moving Sue Bird back into the offense, which offsets the injury to Jordin Canada (questionable today). While metrics say this should be a close game, I’m not sure that it will be.

The final game of the holiday Sunday is Chicago vs Los Angeles. The Spark opened as a -4.5 (O172.5) favorite and the line didn’t change although the over fell (O171). This should be a very tough game. The Sky are just 1-4 ATS and while Los Angeles is 2-5 ATS, which underscores how difficult this game is to bet. Add in the fact that Chciago has gone under in 8 of their last 12, while Los Angeles has gone over in 5 of their last 7, and you see how the trends don’t give you much to work on.

Aight let’s go out and win some Sunday cash! Since it’s a holiday weekend, we’ll be back here tomorrow for the bonus Connecticut vs Phoenix  Monday game. 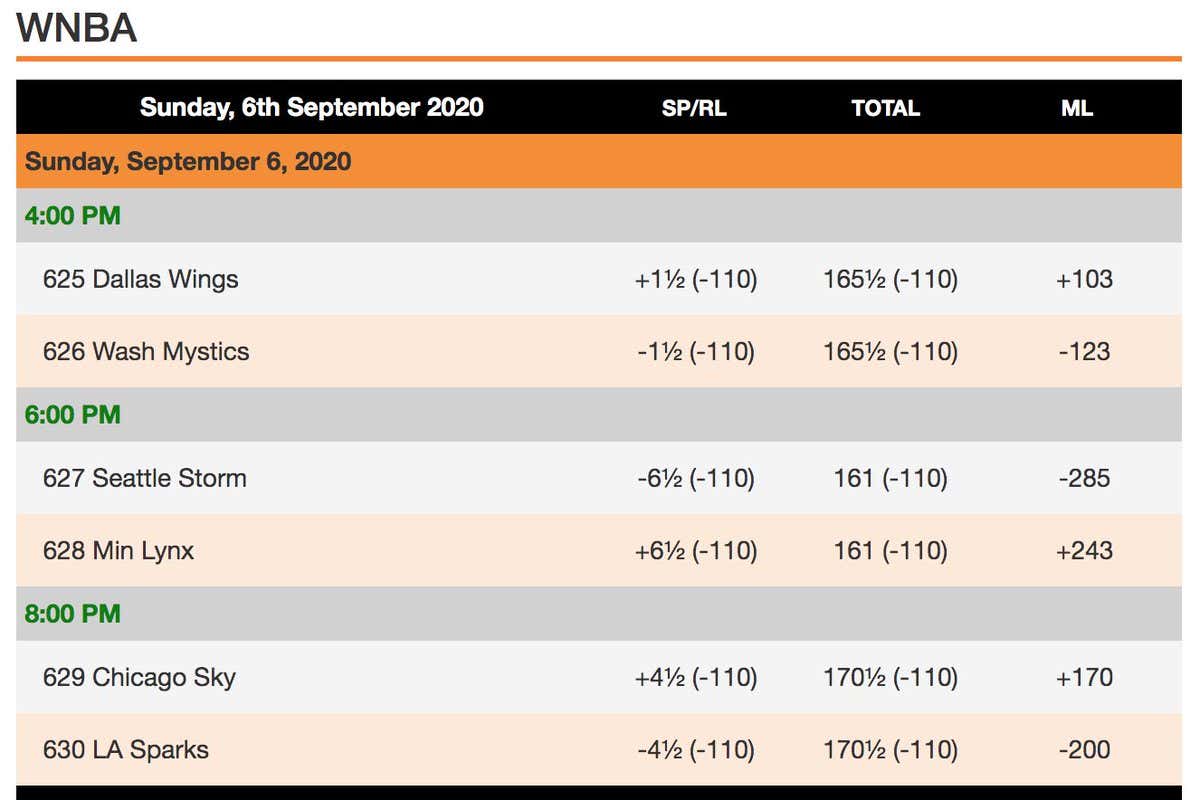 Guess what? 3-0 last night. 5-1 the last two nights. 7-2 the last three nights. Go ahead and complain, but the smart people are making money.

Got a bonus Labor Day game today, and it’s a good one. Connecticut takes on Phoenix in what should be a tight battle between two (fairly) evenly matched teams. The line opened at Phoenix -3 (O164.5) and stayed there (O165 moved a half point).  Phoenix is 5-0 ATS while the Suns are 4-2 ATS of late. Both teams are pretty hot. Both teams have hit 3 of the last 5 unders. Connecticut's Briann January (G) Finger is "?" while Jasmine Thomas (G) is probable, meaning guard play could be an issue for the Suns. I like the Under in this game.

Another fine weekend of winning in the books! We’ll see everyone back here next weekend.