Hello friends! I'm not sure if you heard, but the NFL season apparently starts tonight and we have one or two zillion people here at Barstool that are looking to talk about gambling since its the hottest thing in the streets. What's the difference between what they offer and what I offer? Well while they are talking about units, I am a living and breathing (for now) unit with a blog that is full of good gifs, bad jokes, and a good chunk of data.

I may not be a big time gambler looking to walk the line as I hit the board from RA's gambling corner to Rone's gambling corner. But I do like to throw a few bucks around before the season starts on future bets that I can root for all season long after my fantasy team, NFL team, and Madden team are in the shitter.

So here are my futures picks for the season. All lines are from our good great BEST friends at Penn National Gaming.

Hmmmm, an undrafted receiver out of a small school leads the league in receptions in his 7th year while being the WR1 in a Gary Kubiak offense with a perfectly meh QB. Where have I heard that before? 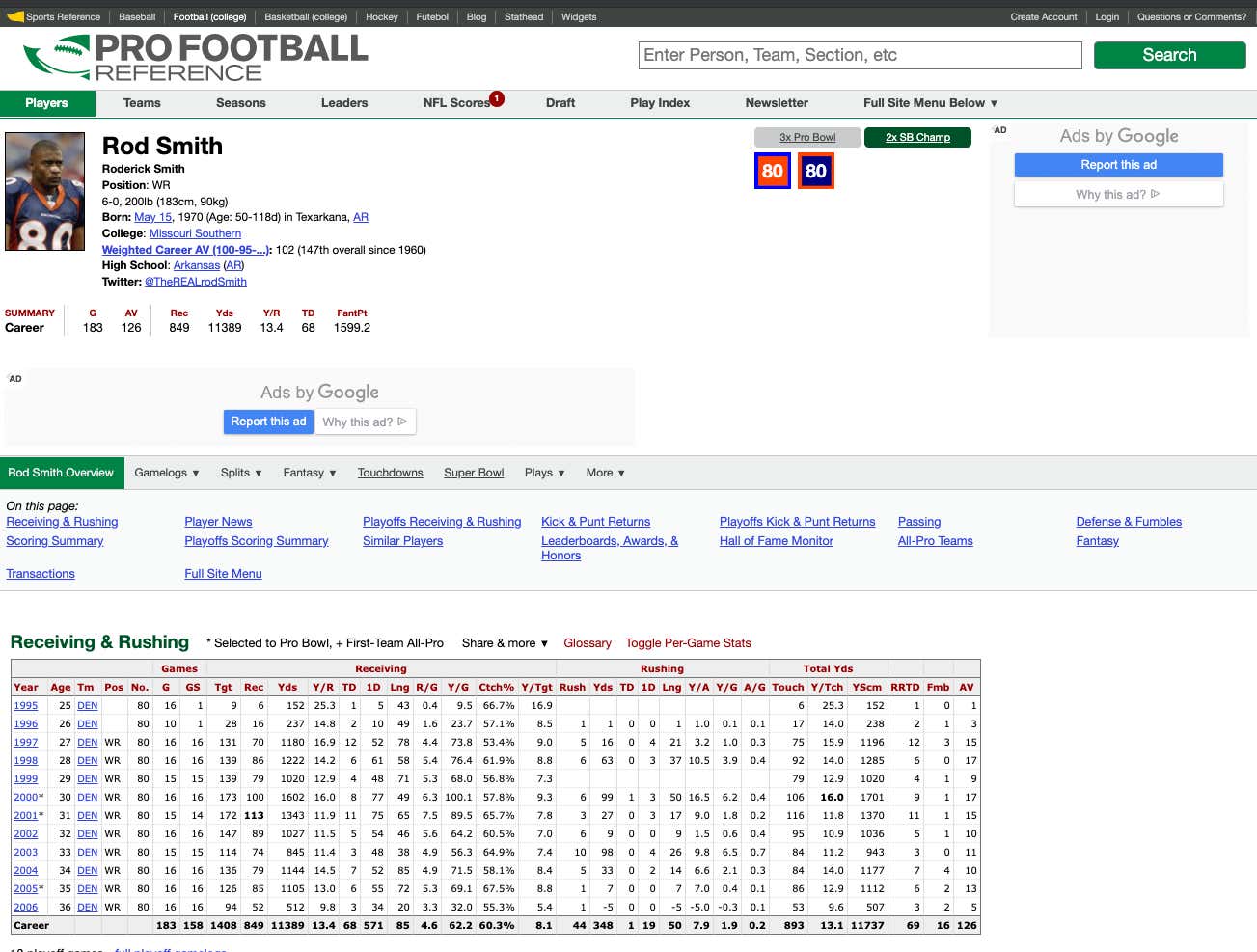 You know when someone drops a motherfucking ROD SMITH reference on your head, you gotta #RE2PECT it. Thielen was an absolute monster two years ago before the Vikings decided to no longer throw the ball after firing John DeFilippo and turned the offense over to Kevin Stefanski, who called the plays last season with Kubiak as an offensive assistant. Well Stefanski is now captaining the Browns ship through the fiery waters of the Cuyahoga River, which means Kubiak is now calling the plays in Minnesota, which should mean great numbers for the RB1 of his offense as well as his WR1. Thielen had a rough season in 2019. But that was mostly because of a hamstring injury that lingered. It sounds like all systems are go heading into this year though and Stefon Diggs is now in Buffalo chasing down Josh Allen cock rockets, which leaves a ton of targets for a guy who is an incredible route runner and can make incredible catches on the regular.

I swear to God this isn't a homer pick since there is no football team outside of my fantasy teams that has hurt me more than the New York Football Giants over the last few years. Saquon put up 2,000 yards as a rookie behind a bad offensive line with an aging (but still wonderful, handsome, future Hall of Fame) quarterback calling the shots. Last year Saquon had 1441 total yards despite missing three games with a high ankle sprain and laboring through the injury in multiple other games.

Simply put, if Saquon stays healthy this season with an improved offensive line, some legitimate weapons around him, and a quarterback that can keep the defense a bit honest as a rushing threat, I think he will hit the 2K mark he got as a rookie.

In fact, if I could pick Saquon to lead the league in Yards From Scrimmage I would. I think this is the year he is the clear RB1 in fantasy and real life. You know what? Fuck it.

I don't see another running back winning an MVP given the current love the position gets from a good chunk of the world right now. But the Offensive Player Of The Year Award always seems to be given to the best non-QB that put up awesome numbers, which I think Saquon will be.

As for a pick that is strictly personal…

During the darkest days of quarantine, I spent wayyyyyy too much of my time reading about Joe Judge, dreaming about Year 2 Daniel Jones, and hoping to God that the New York Football Giants would be good in order to avoid the reality of everything good being taken away from us. Then training camp started, Coach Judge gave me a leader to believe in, and now I am running laps around my house like a psychopath despite having a job that affords me the luxury of never having to leave the house or put on clothes.

Every season there are NFL teams that come from nowhere to snag a playoff spot. I'm not talking about the teams that everyone says will come from nowhere to clinch a playoff spot before they go a perfectly meh 7-9. But a team nobody is saying will make the playoffs. I get that the Giants defense looks like [insert animal here] shit on paper, the offensive line has had barely any time to gel, and an entire new coaching staff has to coach up a shitload of new players during a global pandemic. But I would have to make myself run a lap if I didn't put the Giants in the 7-team playoffs now that Coach Judge has made me a believer.

I felt all smart about this pick before Warren Sharp went on Pardon My Take and basically said everything I was going to say about liking the Colts. The Colts were 6-2 at the midpoint of last season with a win in Kansas City under their belts despite being obliterated from the blindside by Andrew Luck's retirement like a Terry Tate sack.

God I miss those commercials

However, I'm not going to get upset that a person much smarter than me (I?) in all aspects of life likes the pick for all the reasons I did such as Frank Reich being an underratedly really good coach, Philip Rivers going from a perennial bad O-Line that is always searching for replacements to maybe the best O-Line in the NFL, and the Indy defense being sneaky good since we all remember it as those Peyton Manning defenses that couldn't stop a thing the minute Bob Sanders got hurt. In fact it makes me love the pick even more! Reich had the Colts in the mix last season before Jacoby Brissett, TY Hilton and a bunch of other key players got hurt. That may happen again, Phil Rivers may have a noodle arm, and the Colts share a division with two other playoff contenders.

The Colts aren't long shots by any means. But I like them as an alternative to the chalky Chiefs and Ravens picks since they can win physical games in the playoffs and have a coach who helped end the goddamn Super Bowl drought in Philly as the Eagles offensive coordinator. I'm still mad at Reich for giving Eagles fans a championship but at least we got Caleb and Rone's video of Philly residents burning their city to the ground like a bunch of savages.

There is also a chance I feel like an idiot, a fucking idiot for not picking this guy to win the AFC no matter how many of his players opted out to begin the season as he plugs in a new, albeit potentially awesome, quarterback.

Look, this coronaseason is going to be an absolute shitshow. Teams didn't get their typical offseason work in, players can get wiped out for weeks if they catch the bug, and no fans takes away homefield advantage for teams that thrive with one.

[Thinks about it for a second]

Shit, that last point doesn't help my Seahawks pick one bit. However, I personally always make may Super Bowl futures pick based on a coach + quarterback combo I can trust and I know the Seahawks can make it to the Super Bowl with that combo since they did it twice (and would have won it twice if they gave the ball to Marshawn Lynch, but that's another story that has been covered plenty on this blog).

Anyway, the biggest obstacle for the Seahawks is their pass rush, which didn't get helped at all when they didn't bring back Jadeveon Clowney. But I believe their front office will do whatever it takes to fix it since they have always made trades for guys they think can help them right now, such as Clowney last year and Jamal Adams this year. Speaking of Adams, Seattle rebuilding their secondary on the fly to potentially become a Legion of Boom 2.0 makes me love them even more since the NFL is apparently a passing league according to every football analyst with a microphone.

The other big obstacle for the Seahawks is whether or not they will let Russ cook or if Brian Schottenheimer will ride the brakes on this offense all season by ignoring one of the best quarterbacks in football to #establishtherun. I think this is one of those good problems in that at least Russ is on the team while Schottenheimer may not be or at the very least be ordered to allow Mr. Unlimited to become Mr. Unliiiiiiiiimited with Tyler Lockett and D.K. Metcalf causing chaos for opposing defensive coordinators.

Anybody that has watched Mr. Unlimited Russell Wilson in a big game knows that motherfucker is NEVER out of it in the 4th quarter. I don't love that the NFC West has four teams that could potentially win the division. But I truly believe in Russell Wilson until the refs tell the players to leave the field because the game is over. And even then you think that slippery motherfucker can pull it out. I hate that the Giants haven't been good for years. But part of me is happy I haven't had to face Mr. Unlimited in a playoff game because he is one bad hombre.

This isn't a future but instead a prop bet I have been betting since last season and will betting every week until it hits and then continue to bet it nonstop because it's free money in my brain. His hands may not be perfect considering he logged his first drop of this unstarted season during the Chiefs ring ceremony.

But Mecole Hardman is super fast, on the best offense in the NFL, has a bunch of teammates that the opposing defense will key on, and oh yeah returns kickoffs so he gets the first chance to score a touchdown before anybody else if the Chiefs win the coin toss. That's just science, folks. Plus he dressed up for every playoff game last season.

Add all that up along with Hardman potentially being the first person in the entire NATIONAL. FOOTBALL. LEAGUE (said in a deep voice so you know I mean it) with a chance to score a touchdown if the Chiefs win the toss makes him my Clemstradmus Prop Of The Week.

And that was your first annual Clemstradamus Futures Column Presented By Barstool Sports Thanks To Our Friends At Penn National Gaming. See you guys on Clem Island for the rest of the season!