Anyone who followed knows that this weekend was a disaster for betting horses. Kentucky Derby day saw a late, all stakes Pick Five with no favorites emerge as winners. Tiz The Law, an enormous betting choice, finished second in the Run for the Roses. It was just a disaster all the way around. Literally one of the worst betting weekends I've had in years. So I took yesterday off from the ponies. Sometimes you need a reset. Sometimes you have to reflect, recalibrate and renew your focus. Which brings us to tonight. Penn National is running and you all know how much Paulie and I love Penn National. Casino Dad is there, and it's an awesome place to watch some night time thoroughbred racing. One thing to keep in mind about racing at Penn National is that the Pick Five is a dollar bet. This means that your tickets will cost a little more, but if you're able to hit it, the payouts will also be higher than at comparable tracks with a .50 cent bet. That's enough preamble, let's jump in. This thing starts tonight at 8:36pm eastern.

Race Seven: My top choice here is the (5) Show Maid. I like the turf to dirt angle on this horse and it's a pretty significant class drop for her as well. I don't love her alone on the ticket, so I'm also using the 2,3,4 on my P5.

Race Eight: This is the start of us getting risky. I think the (3) Rag Top is a single here. This Union Rags mare has won against winner at higher levels than this in the past. She's done it twice this year, in fact. I also like the cut back in distance and class. This field looks like she should be able to handle it if she runs as she has in the past. Don't panic if she's not right up on things early as she tends to do her best running late.

Race Nine: Guess what? We're singling again. The (5) Clara Creek is my choice here. She just lost at this level in her debut last month by a half a length. It is completely logical to expect improvement in her second start, especially considering she fired a 5 furlong bullet work at the track on August 31. She appears to be in excellent form and ready to graduate.

Race Ten: Now we do the opposite and push the ALL button. This field does not have a standout to me either way. There isn't anyone who is terrible or excellent. It would not shock me if any of them won and the money should be pretty spread out in this one.

Race Eleven: The (1) Inhonorofthemoon is my top pick here. This horse has won two in a row and is trending in the right direction. The race placement has been very logical and the five year old gelding has fired two very nice works in a row. At 6-1 ML this is a nice choice. I will cover by also using the 2,3,9. 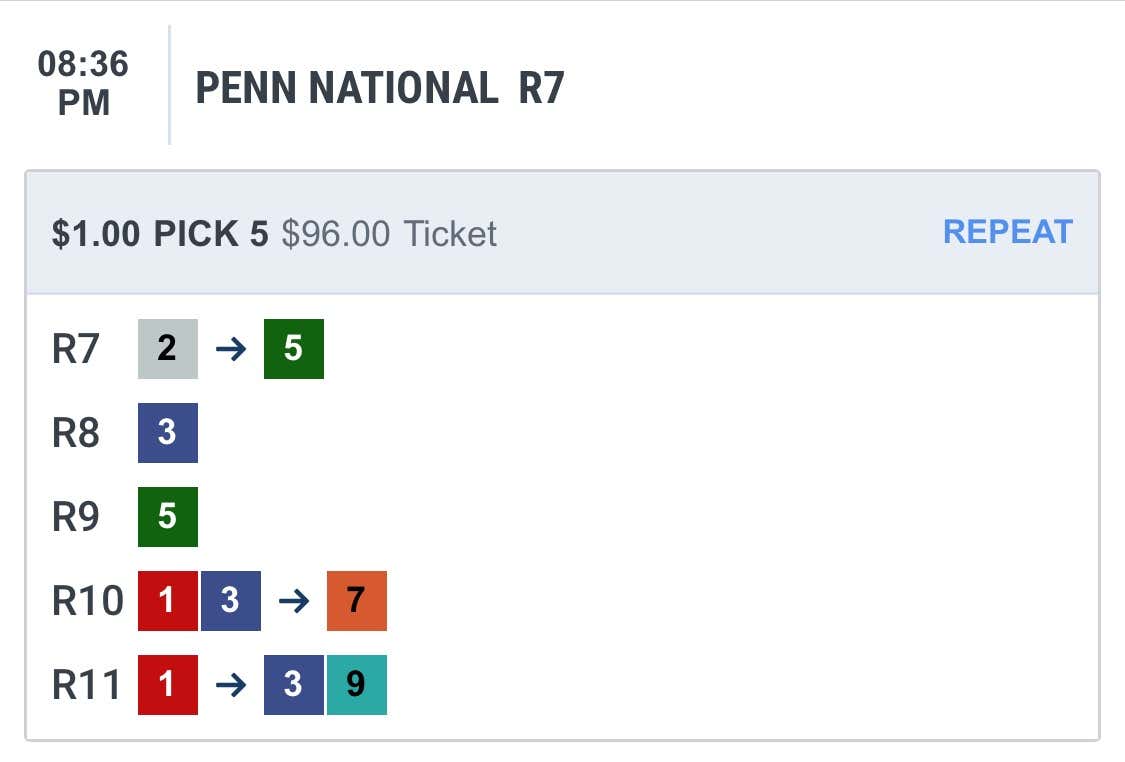