-A&M is definitely the "sharp" side in this game, but this matchup is made for the Gators.

-Thanks to Kyle Trask and Kyle Pitts, Florida ranks 4th in the country in passing expected points added (EPA).

-We saw what happened last week in Alabama with A&M's pass defense and Florida is going to be able to attack the Aggies in a similar way.

-Reports have 53% of the tickets on Tennessee but 74% of the money.

-Stetson Bennett IV has been a great story, but how good is he? Georgia ranks 44th in passing EPA through 2 games in the season, but he ranks 2nd in QBR, 21st in EPA, and 15th in PAA.

-A lot has been made of Georgia in the trenches. They rank 16th in line yards, but 50th in rushing EPA.

-Tennessee's defense has been the 20th best against the run according to rushing EPA. On the other side of the ball, Georgia's defense ranks 32nd in the same stat.

-This will be a low scoring game, the total sits at 42.5-43.5. I'll be taking the points here. This is also a look ahead situation for Georgia with Alabama on deck.

-Off a tough loss, Mississippi State will have the chance to throw the ball all over the place on Kentucky. Only one team has been worst defending the pass according to EPA so far this season.

-Weather is a bit of a concern, but it looks like this game will be played during light rain with 5-10 MPH winds. Shouldn't affect the Leach Air Raid too much. I'll take the 3.

Here is the forecast for Auburn, Alabama tomorrow at kickoff: 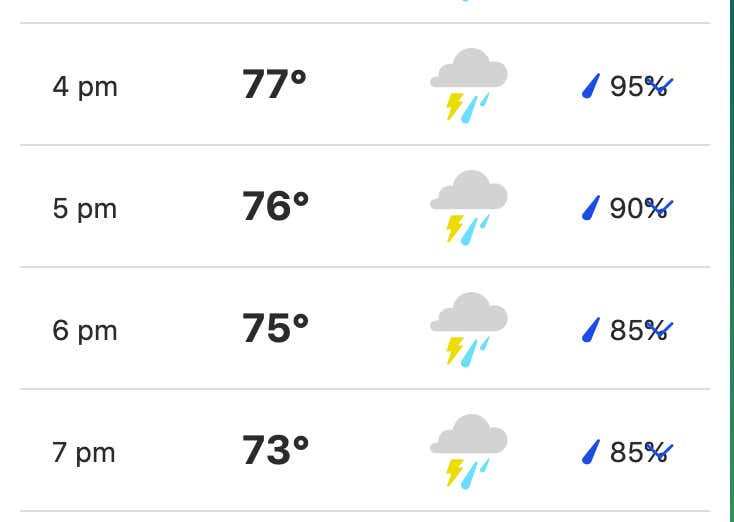 -Barry Odom has been a blessing for Arkansas. Great gameplan against Miss St. last week.

-Syracuse higher in SP+ than Duke and an underdog at home.

-Duke is allowing the most havoc in the entire country. Syracuse ranks 32nd in total havoc on defense, not phenomenal, but will be good enough to cause it against Duke who is struggling big time.

-Games between service academies have gone under in 35 out of 44 games since 2005. I feel like every service academy under has hit since I started blogging for Barstool.