I'm not going to sugarcoat it, Syracuse football is an embarrassment to America and everything we stand for as a society. Every Saturday they suit up and deceive their fanbase into thinking they have a chance to score more points than the opponent. A team that is just two seasons removed from a 10 win year has now fallen to rock bottom. This past Saturday they were home underdogs to LIBERTY. Fucking Liberty. How'd the game go? Was Vegas wrong with that line? Did Syracuse take that spread as a sign disrespect? Nope, they were essentially annihilated by the Flames 38-21. In the second half the game was never close.

Fresh off that loss, the Orange get Clemson in Death Valley. The Tigers just won by 66 on the road in George Tech and now they get Cuse. The spread? The largest Syracuse has been a dog in the last 30 years per the Barstool Sportsbook app. Download here and bet responsibly in Pennsylvania. 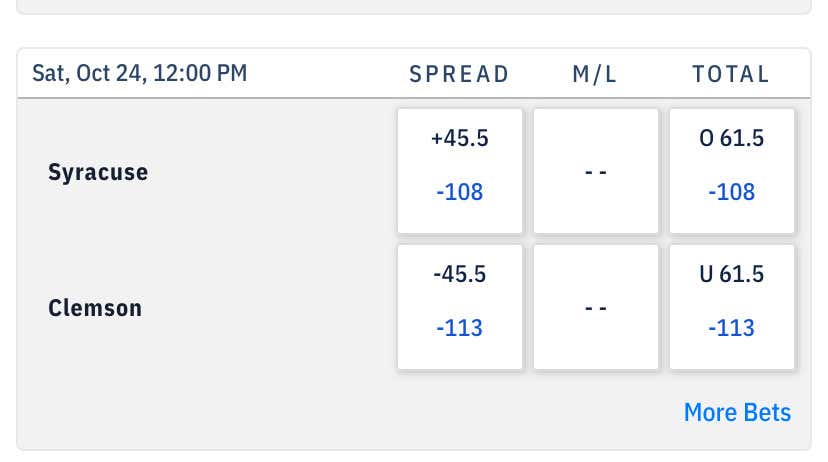 FORTY FIVE AND A HALF??!? Scariest part, I don't even think that's enough. This team should be disbanded. Just be a basketball school. The product they continuously put out on the field is abysmal. You can't lose by 3 scores at home to Liberty. I know Hugh Freeze is doing a nice job over there and Syracuse is banged up, but that kind of loss is enough to fire everyone. That should be an auto relegation. I love Syracuse, but I despise their football program with everything in my heart. 45.5 points is a joke as an ACC team. That's the kind of spread you see when Bama plays The Citadel. Just fast forward to basketball season, please.