If you woke up this morning feeling like shit, that means you did Halloween right. Congrats on that, and congrats on the kinked-up costume sex.

But now your head is pounding and you're questioning your place in the world, so let me offer you a 3-hour vacation to the idyllic sunshine and serene aqua jerseys of Miami.

The key to betting on Tua today is that it's not about Tua...

…it's about his team and the situation. Fitzpatrick played admirably and was in solid command of this offense, so the switch to Tua in his first start really doesn't come with any point adjustments.

The value comes with the circumstances: the Rams are traveling east for an early start on a short week against the Dolphins who are at home off a bye. And in the same way Denver's elevation helps the Broncos in September when opponents are still acclimating to game speed, Miami's heat/humidity helps the Dolphins in November when opponents have gotten comfortable with milder weather. All these small things add up.

Prior to Monday night, all of the Rams' wins exclusively came against the putrid NFC East. That means that their highest-quality victory this season came six days ago against the Bears, which will only look less impressive with each passing week. Los Angeles held Chicago's offense to a field goal, not because the Rams have an elite defense (11th in defensive DVOA with garbage linebackers), but because the Bears can't run and their only offensive threat (Allen Robinson) was matched up against a familiar lockdown CB in Jalen Ramsey. When the Rams D faces a competent offense, their blemishes are exposed. That will be the case this week.

The Miami D has been perfectly average this year (14th in defensive DVOA), but they've trended up since the return of CB Byron Jones a few weeks ago. Now rocking a nasty cornerback combo of Jones and Xavien Howard, the Dolphins can finally afford to stack the box and resuscitate their ailing run defense.

And let's not forget that Dolphins head coach Brian Flores was a key contributor in devising a Patriots defensive gameplan that held the Rams offense to only 3 total points in Super Bowl LIII. Considering that it broke McVay's brain for the entire following season, McVay looks back at that game as fondly as Barry Badrinath recalls playing ping pong in Ding Dang.

Bet volume has been heavy on the Rams all week, but books are not budging on the 3.5 spread because they've seen enough sharp action on the Dolphins to keep the money balanced. After Miami wins outright today, this is going to be a game where everyone says "the NFL is crazy, man" or "Vegas knows." Just get ahead of that and bet the Fins here.

Action: 71% of bets on the Packers

The Packers just trounced the Texans 35-20 a week ago, and when we last saw the Vikings, they got blown out at home by the fuckin Falcons. With the Packers having as many losses as the Vikings have wins, there's no wonder why the vast majority of bets have been placed on Green Bay. But the line moved from GB -7 to GB -6. Why?

Ranking 22nd in defensive DVOA, the Green Bay D is nothing special. They shut out the Texans in the first half last week, but Houston had already shifted their focus to cleaning house at the trade deadline after losing their season in the previous week. The Minnesota D isn't much better, but they can only trend up as Zimmer has been continually refining a unit that suffered a mass exodus of talent coming into the season. The bye week will only benefit him.

But more than anything, the reverse line move is due to weather. I grabbed MIN +7 earlier this week when I was creeping on Wisconsin wind forecasts like an absolute fuckin weirdo… 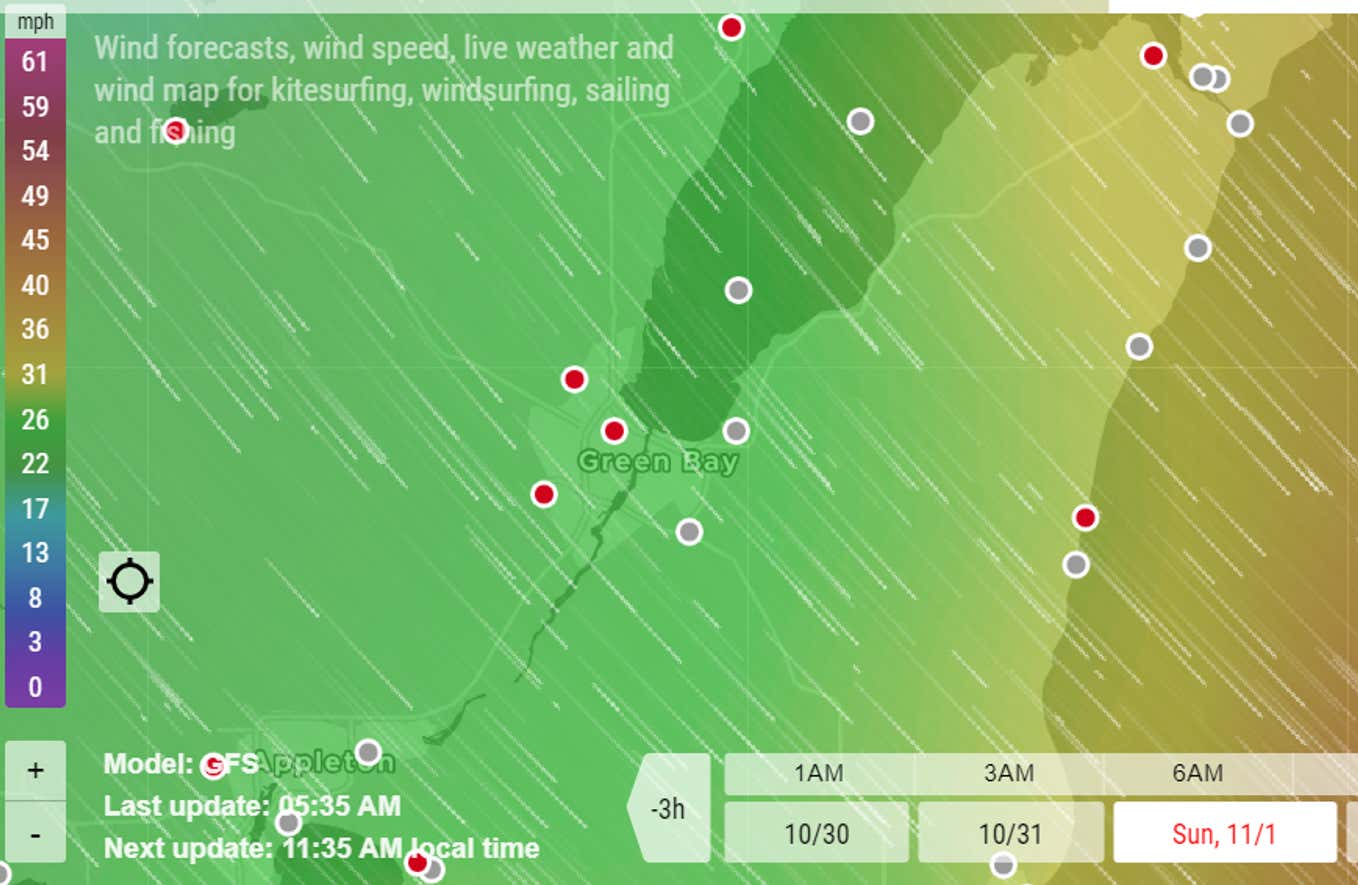 Minnesota's best cornerback this week is mother nature. Winds are projected to consistently exceed 20 mph with wind gusts in the 40’s, so each team will be relying heavily on the ground game. That's why the line shifted down from GB -7 to -6, and why the total shifted down from 55.5 to 50. With Rodgers throwing less and Aaron Jones being out this week, the advantage goes to Minnesota's zone rushing attack under Gary Kubiak (5th in yards per carry). This game will be more of a struggle than most people anticipate, and you'll want to be on the side with the points.

Past those two picks, I was tempted to give out the Jets on a 25-point teaser leg at KC, but I can't in good conscience toss out that slop. Losing that teaser leg could irreparably derail your life to a path of depression and addiction, and I just can't have that blood on my hands.

With Dallas vs. Philly in prime time, you can safely attack beers with reckless abandon this afternoon and pass out before sunset. You won't be missing anything. Best of luck out there today, and let's keep winning ugly.