Is there something going on today? Damn right, full slate of Champions League. The rest is just details. So sit back, relax, and start getting your mind right with the sweet sounds of soccer sex: 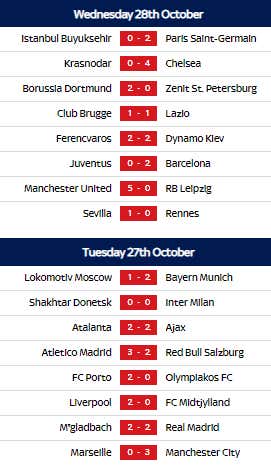 After two games the group tables look like this: 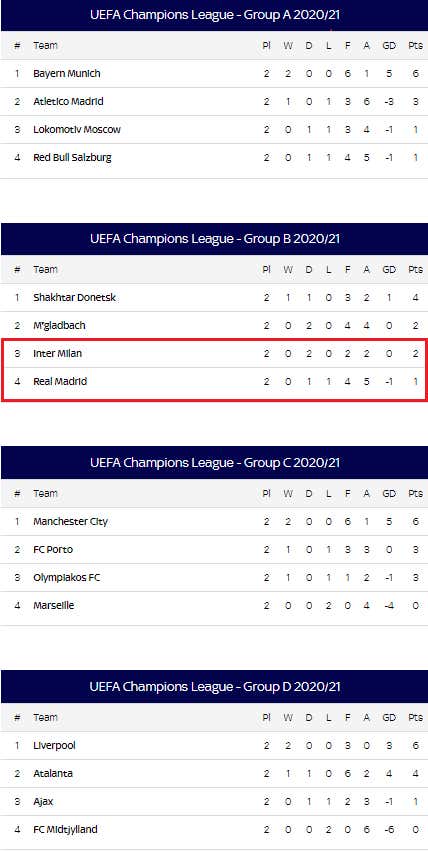 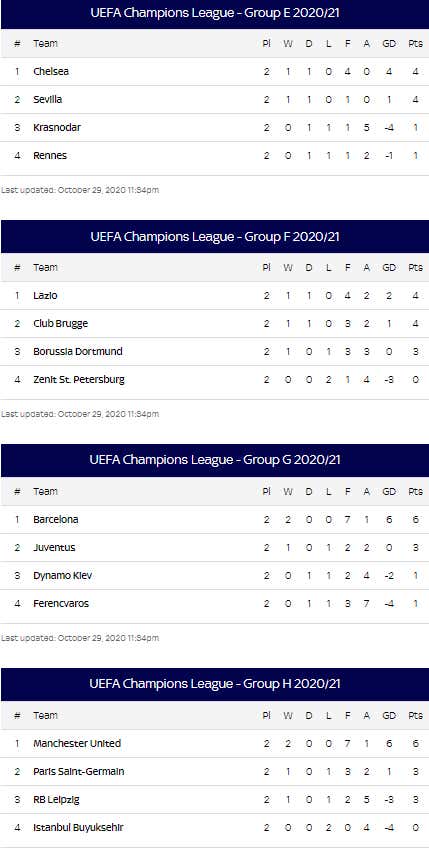 It is a little too soon for teams to hit the panic button if they are in last place – except for maybe cough Group B cough - but we are pretty damn close to that point. Anyone on one or god forbid zero points after the third matchday is in big trouble so this week’s games are the first that really feel like they are starting to the separate the wheat from the chaff. 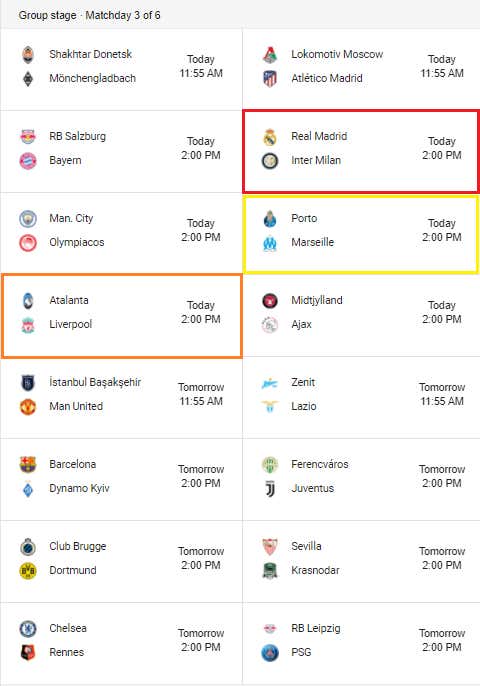 The two biggest disappointments in this season’s Champions League square off in a massive game that will put the loser waaaaaaaaaaaay behind the 8-ball in terms of chances of advancing to the knockouts… which for either (and perhaps both!) of these clubs would be a youuuuuuuuuge failure and possibly a firable offense for Zinedine Zidane or Antonio Conte. Fact is that Shakhtar have looked damn good so far, and a win for them against Gladbach would make it very difficult for both Madrid and Inter to qualify. So, again, this game is very bigly. 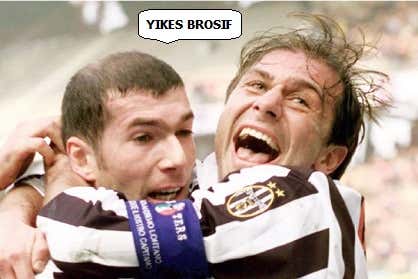 On paper you gotta give the edge to Madrid, even with all the injuries they are carrying. I don’t trust them though, and would probably be dabbling on Inter who come in remarkably healthy except for one thing: no Romelu Lukaku. Big man is out with a thigh injury. Perhaps Conte can pull some sort of ugly 0-0 or 1-1 draw out but you gotta have bigger balls than me to pick Lukaku-less Inter in Madrid – fans or not.

Madrid/Inter will get top billing based on pedigree and whatnot but this game right here is where the action will be at. Atalanta is must-watch TV all day every day, then add Liverpool’s defensive injuries plus world class attack to the mix… ohhhhhhh yes, this is shaping up to be delicious.

Now to be fair, Liverpool's backline looked fairly competent last game with Nat Phillips deputizing alongside Joe Gomez as the CB duo. However, (1) Phillips is ineligible so next man up is Rhys Williams and (2) that was against a West Ham team that was missing their best player in Michail Antonio. Atalanta are an entirely different beast. Duvan Zapata and Alejandro Gomez are the real deal and unlike a lot – maybe even most – teams that Liverpool will face the Italians actually have wing backs that will make Robertson and TAA think twice about bombing upfield all day (especially given the aforementioned fill-ins at CB).

Can’t say I’d feel all that confident in picking either of team to win but I do feel confident in saying there should be GOALS galore… so best bet is definitely the OVER unless you hate money. As for the game, I could legit go either way so I’m going with the more attractive odds.

I backed myself into a hole on this one. I really think Marseille is a better team than they have shown – though the loss to Olympiacos definitely gave me pause – and yet here they are sitting on zero points desperately needing something from the third game… which is in Portugal. Rule #1 of Champions League never bet against the Portuguese, especially at home. Thankfully I’ve never claimed to be especially intelligent.

Reminder: another big slate tomorrow. Stay tuned to find out you massive beauties.