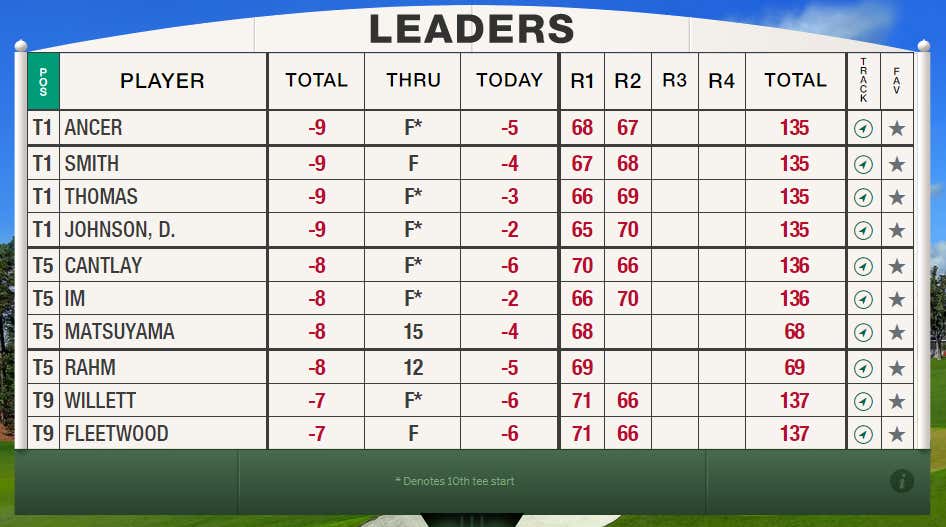 There is your leaderboard to start the day - and what a leaderboard it is. The world's #1 and #3 player are tied for the lead, and Rahm (world #2) is one shot back with a 12 foot birdie attempt on the 13th hole to start the day. Never in the history of golf have the top 3 players in the world been tied for the lead at the end of a round in a major, and we just may get that when the 2nd round concludes in the morning. There are some other great names in the mix here too. None of these guys are pushovers and probably the biggest surprise on that front page, believe it or not, is a guy who has already won a green jacket, Danny Willett. Go figure.

Here's the top of the betting board to win the tournament at the moment courtesy of the Barstool Sportsbook: 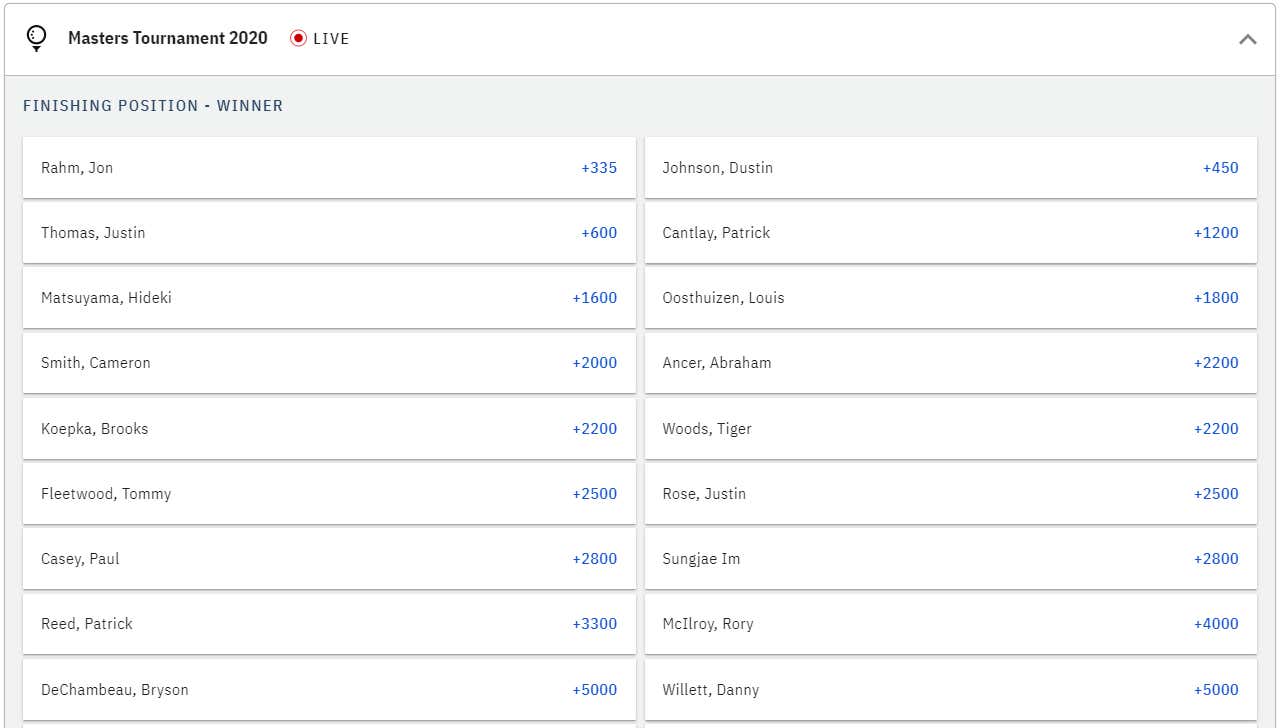 Now something to keep in mind here is that nobody has come from outside the Top 12 after 36 holes to win the Masters since Jack back in '86. The 2nd round hasn't yet been completed, but the players sitting only 3 shots back at -6 are currently T-14. It's not unforeseeable that somebody breaks that trend, but I'm going to operate under the assumption that it won't because there are just too many good names at the top that they would need to surpass.

So sorry to say it, but Tiger, Bryson, Rory, Koepka etc… gonna have to pass.

If I'm picking a horse near the top, it's going to be Justin Thomas at +600. I've got a ticket on him already and I've been saying repeatedly that I like him to win over anyone in this field. His irons, his irons, his irons. So good. Rahm is the favorite now because he's got a chance to leave Amen Corner tied for the lead and has more holes left on a gettable course than DJ and JT, but I just don't think he should be favored that heavily. And if I'm the one handicapping it, I'm probably swapping JT and DJ's odds.

If there's a couple values down the board to take a flier on, it's Tommy Fleetwood and/or Justin Rose at +2500. Rose is another guy I've had a ticket on from the start (along with Cantlay) and he's got phenomenal Augusta history. Fleetwood played a very quiet 66 that may hold up as tied for the lowest score of the 2nd round and is flying under the radar at -7.

If you're looking to play hole props, this table showing hole statistics up to this point may be a useful tool for you. 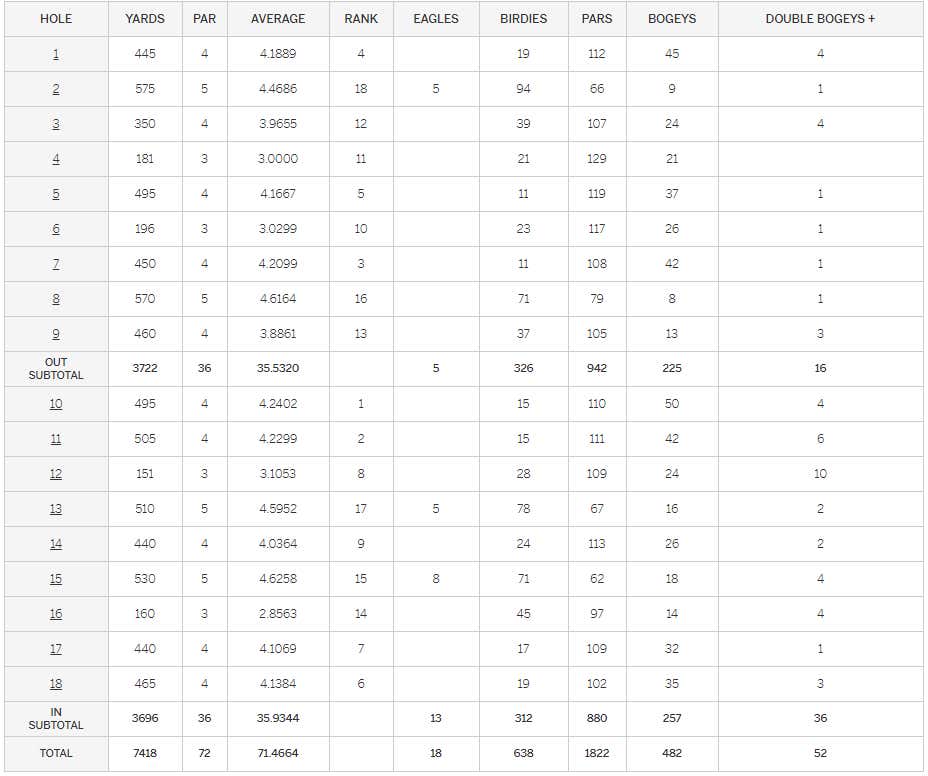 Just be careful, the conditions on Saturday may be a bit tougher, particularly on holes like 1, 5, 6, and 11, and 18. We'll wait and see where some of those 3rd round pin positions end up but I would be looking for some bogeys out there. Gotta love carnage.

Lastly, we're not going to see many 3rd round head-to-heads show up on the book until the pairings are finalized at the end of the 2nd round, but there are a few available in addition to some round O/U's. If I'm betting any of those O/U's, I'm probably leaning on taking overs because this course has to bite back at some point. It just has to.

As for a 3rd round matchup, I like Cam Smith +100 over Abraham Ancer. I love this matchup because it's going to pit two guys at the top of the leaderboard against each other that aren't necessarily supposed to be there. Heat will be on. I like Smith because this course will firm up and look like its traditional challenging self as Saturday progresses. That will favor the players with experience at Augusta and throw the debutants for a loop as they scramble to recalibrate to a course they thought they'd figured out after 2 days. For example, Ancer hit a swooping hook out of the pinestraw on his approach on 9 today that never would have held the green under normal circumstances. On the other hand, Cam specifically said in his postround interview today that he expects to have to adjust to landing his approaches a bit shorter and allow them to release under the expected firmer conditions. Cam Smith has played 14 Masters Tournament rounds (well I might add) in his career and Ancer has played 2. That experience will pay off.

I'll also be taking Rose +120 over Fleetwood for similar reasons and simply for what I mentioned earlier about Rose being an Augusta guy.

Those are my bets and I'm sticking to em. Enjoy the sweat (responsibly) and most importantly…. enjoy Day 3 of the Masters.