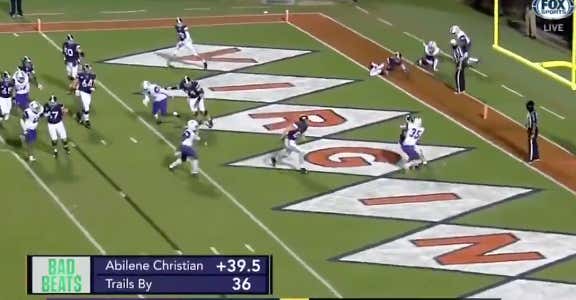 I watch SVP's "Bad Beats" segment every week. And every week I'm stunned to see how some games ended that didn't make it onto my Twitter feed or Barstool. But this one takes the cake. I'm not sure I have ever laughed as hard or been in as much disbelief as I was watching the ending of Abilene Christian vs UVA. Let me give you a sneak peak of what happened…but also keep in mind this is one of like 5 unbelievable parts of the ending to this game…

Do I have your attention now? Ah fuck it, it's 1 am, let's just get to the whole play. Buckle up.

In-credible. Even from the very beginning, the 15 yard penalty for excessive celebration while down 1,000 points, this is the best ending to any game ever. It would have been plenty good if the game ended with the absurd double pass play in the end zone for the safety, but then we get the cherry on top with the pick 6 and Stanford Steve yelling at 67 to GET ON YOUR HORSE and SVP replying THE HORSE IS ON HIM

And why did they call that double pass in the end zone, possibly the worst play call to ever be played since that Pat McAfee fake punt?

Apparently the offensive coordinator read the wrong line? How is that possible? If he wanted to run out of the clock wouldn't he have just said into the headset "run out the clock" instead of "run the most absurd trick play in the entire playbook while in our own end zone"? I think he wanted to run that play, I truly, truly do. You don't just accidentally run that out of your own end zone and have the entire offense just went with it? I'm woke on that excuse, but boy am I glad he did it.