Welcome back #ReagsReaders maybe #ReagsCabinet Members. Unsure on the name, it's a work in progress, but if I've learned anything it's first you get a name for a hype group, then you get a podcast, then you get the khakis and I want the khakis. Nice little 7-3 day yesterday to get us rolling here. Just a reminder that every single day there are games, this blog will go up. We're giving out stats too - I'm tracking every team in the country, going to give out trends and stats that matter as I go through games along with a breakdown of teams. Take it for what you will, but essentially this will be your one-stop shop for everything you need to get bets in, every day there are games. Once we get more trends they'll be in here too, obviously tough to do zero or one game in the season. Let's get into it. I'll update the blog if lines come out for later games that I want to play too. 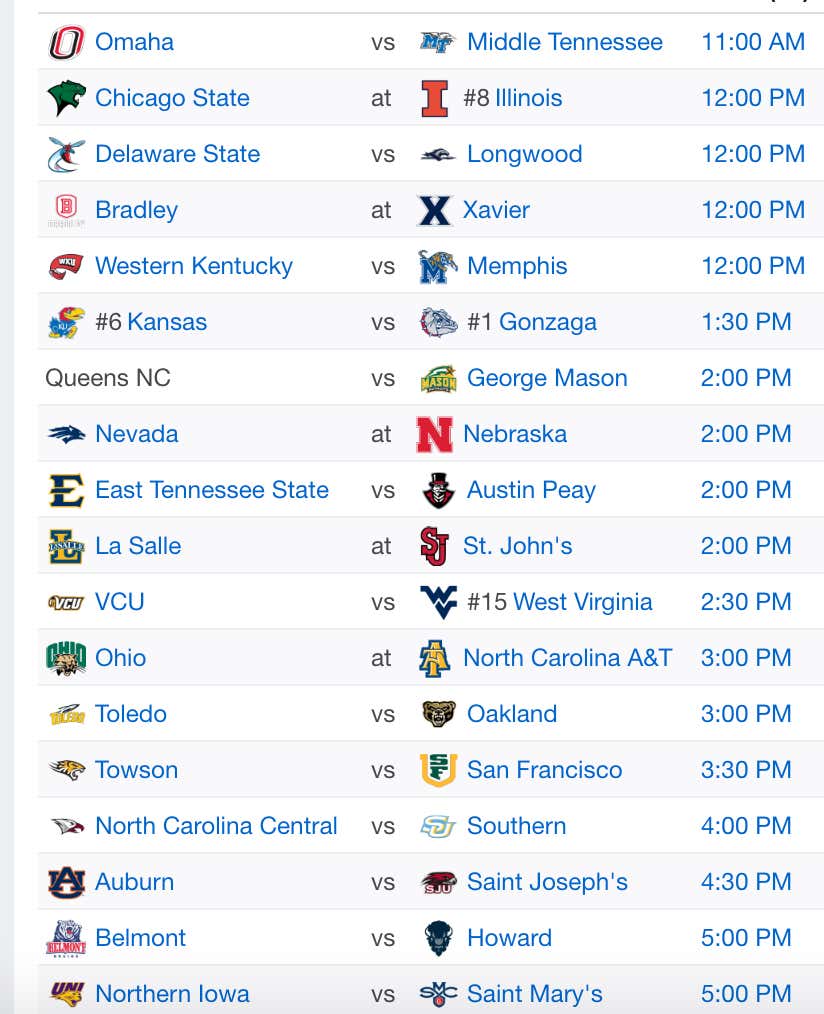 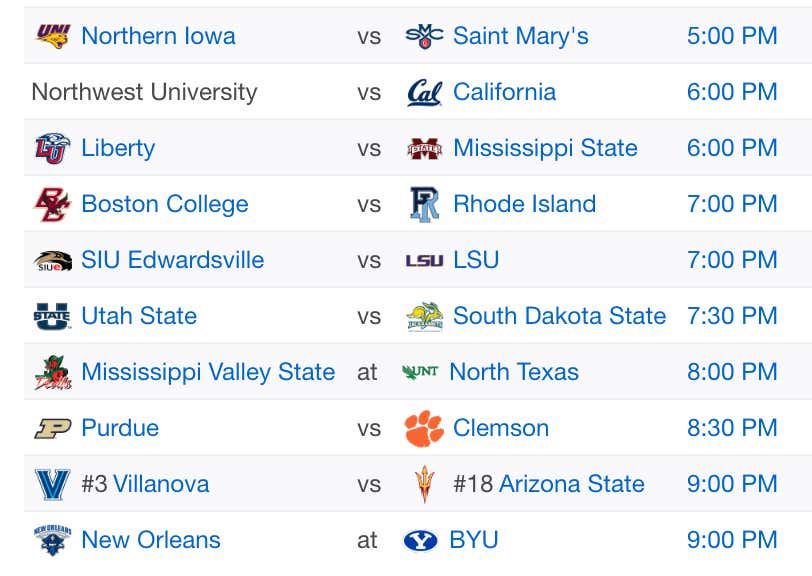 Game is at noon in Sioux Falls, South Dakota

What you need to know: They put on an absolute defensive clinic yesterday against Saint Mary's. Along with that Boogie Ellis showed up, which is something that I actually talked about in the pregame. Sure, I got the over wrong, but here's the thought process on Memphis.  The biggest problem last year is Memphis was one of the most turnover prone teams in the country, mostly because of young guards. They also were just dogshit in the halfcourt. They already played at the 17th fastest tempo last year and Penny wants to play faster than this this year. They ranked 210th in the country in offense last year. That HAS to go up. They turned it over just 10 times yesterday and shot 7 of 16 from three. We're off to the right start.

What you need to know: Yeah this is a goddamn good mid-major team. Charles Bassey is an NBA talent and a former 5-star. Yesterday against UNI they forced turnovers and got out and ran. That's where they are at their best and in the halfcourt they can play through Bassey. Despite going just 1-for-5 from three, Bassey does have the ability to step out and shoot the three as well. The player really flying under the radar is Taveion Hollingsworth, who scored 26 yesterday.

Reasoning: I'm bullish on this Memphis team. I really like them and think you see Boogie Ellis keep the hot streak alive. Everything I've heard too is the Pentagon is a shooters gym. So now you have two teams that rely on forcing turnovers, wanting to play fast and can attack different ways is how we get the over. At the same time Memphis can throw guys like Moussa Cisse and Lance Thomas on Bassey while they have long wings to match up with WKU. At the -3 I'll take that and try to hit the double.

What you need to know: Everyone loves WVU this year and it makes sense. They return a lot, they defend their ass off despite not being Press Virginia anymore. It's a solid halfcourt defense that isn't as reliant on forcing turnovers as the Jevon Carter era was. They rebound the hell out of the ball and get free points on offensive rebounding. There is a concern about shooting as their guards shot no higher than 33% last year.

What you need to know: They forced Utah State into 18 turnovers yesterday. That's an important note when you're looking at applying pressure to WVU's guards and not letting them play through the bigs. That's also credit to VCU's system more than players considering they lost Isaac Vaan, one of the best defenders in the A-10. At the same time they shot 10-for-24 from three. I have no idea if that can continue, but again, the Pentagon is a shooters gym.

Reasoning: This just feels like two similar teams that take away what each other do best. Yeah, WVU is the better version but you're asking for double digits in back to back games? I'll take my chances with the dog here. VCU should be able to turn WVU over and get some free points there. They also should be able to rebound. They held Utah State to just three offensive rebounds.

Game is at 3pm in Cincinnati

What you need to know: Toledo lost at the buzzer yesterday to Bradley. That's worth noting when you're talking about a back to back here. On top of that we get Toledo with Marreon Jackson, one of the best mid-major guards in the country. He struggled yesterday from the field and they still had a chance to win.

Reasoning: Oakland just got out of quarantine on November 20th, 6 days ago and it's showing. This is something I'm trying to track and something I'm tending to play. If a team was in quarantine for an extended period of time, I'm going to fade them. Toledo lost at the buzzer despite not getting much from its star. I expect a bounce back game from Jackson and again, Oakland just looks like a team that hasn't been able to practice at all.

What you need to know: Auburn lost everything from last year led by the No .5 pick Isaac Okoro. On top of that 5-star and the highest rated recruit in school history Sharife Cooper isn't cleared by the NCAA to play so he didn't even travel with the team. I actually like Bruce Pearl as a coach and what he's done at Auburn, but this is worth talking about as they get ready to start this season. This team is built like a typical Pearl team though. Heavy guard play, a bunch of long wings and a post player. It's modern day basketball, but they just don't have any experience.

What you need to know: Second year of Billy Lange and they have one of the best players in the A-10. I can't get enough of Ryan Daly. He legit looks like he should be a mid-level accounting manager and then bust your ass at the YMCA. This team launches threes. Actually, that's an understatement. Last year they were 5th in 3PA%. That's how they want to beat you. Defense optional and let Ryan Daly cook.

Reasoning: What have I been preaching? I'm going to play teams that have a bunch of guys returning vs teams that have next to nothing unless there's top end talent. Guess what? Auburn doesn't have that top end talent without Cooper. Ryan Daly should get his points, but the biggest thing is Taylor Funk helping out too.

Game is at 5pm in Washington, DC

What you need to know: Makur Maker baby. The 5-star recruit decided to go to Howard over a school like UCLA. I love it. Why not? They also are bringing in Purdue transfer Nojel Eastern, but questions about his eligibility are all over the goddamn place. This team last year just refused to guard though man. They actually have decent talent but they are just so fucking bad defensively. Eastern helps out there if he's eligible where it's important to see.

What you need to know: This team has a great inside-out combo with Grayson Murphy at point, who is a walking triple-double and then Nick Muszynski at center. Both guys are in their third year as starters, which is vital especially with Belmont's offensive sets. They run a motion offense with predicated cuts and screens based on how the defense is playing. Last year we saw them avoid the high PnR and instead put the ball in the post and play through there with Muszynski as a good passer.

Reasoning: Again, experience vs a team that can't defend. Yeah, Makur Maker is awesome but he has to go up against one of the most experienced bigs in the country. I wouldn't be surprised to see Howard get lost a ton defensively with all of Belmont's cuts and offensive sets. Grayson Murphy should have a field day with his ability to set up others. Howard is an awesome story and I want them to e good, just not today.

Game is at 7pm in Connecticut

What you need to know: BC played Nova tough yesterday. No doubt about it. They gave them fits by attacking off the bounce, but for me that said more about Nova's perimeter defense and some concerns there. They do have a strong back court with former 4-star Makai Ashton-Langford and Tabbs, who is returning from injury. They showed a bunch of zone against Nova as well. Curious to see if that stays more and more.

What you need to know: Coming off a loss to Arizona State. Bring in a handful of big name transfers led by the Mitchell twins from Maryland and Jalen Carey from Syracuse. However, this team runs through Fatts Russell. The key is the fact that David Cox wants this team to play fast. He has a bunch of depth and guards that can fly all over the place. Russell is also one of the better on guard defenders in the country. They are going to press the hell out of you and fly all over the place.

Reasoning: Rhode Island played Arizona State to the last minute despite Fatts Russell having 4 first half fouls. He's going to come out pissed off today and don't be surprised to see him have his way against BC's zone. I also think URI's fast pace tempo will speed BC up too much. Yeah, they took Nova off the dribble but with URI's depth, that defense can do a little more. Plus, I love fading a team like BC who is a heavy dog coming off a close loss. Tough turnaround.

Game is at 9:30 in Connecticut

What you need to know: The bigger injury isn't Bryan Antoine, it's Dhamir Cosby-Roundtree and we saw that yesterday against BC. Eric Dixon wasn't ready to play yet and that just really shortens Wright's bench. For me though, we know about JRE and Gillespie, but we should be talking about Justin Moore. Every year we see a Nova guard/wing make this huge jump and it just feels like Moore is that guy this year. I love his game. He's a secondary ball handler, a good shooter and knows how to attack. With eyes on Gillespie and JRE, he's the one that can really breakout.

What you need to know: Yeah, this is still Arizona State. They don't love to defend, they blow big leads but my God are they fun to watch. They rely on heavy guard play. They want to run. Remy Martin is a first team All-American while Marcus Bagley and Joshua Christopher are 5-star recruits. They want to get the ball and spread you out offensively while looking for the extra pass and love the corner three. Late in games, give the ball to Remy and clear out.

Reasoning: These teams actually match up well together. I know that Arizona State can't really defend but Villanova is smart enough to slow the pace down to where they like it. They love playing in the halfcourt and really excel there. They can take advantage of Arizona State's defense and get the shot they want. But I expect a slower game than normal.

Listen, I'm not touching this game because I don't love the line. I'll talk about it though. The Kansas wings/guards can really bother Gonzaga and I don't know who other than Suggs can take them off the dribble. That limits that offense. At the same time I don't know if David McCormack can stick with Gonzaga on PnR's while Timme steps out. I want to see what Gonzaga looks like with the Suggs/Nembhard backcourt too. I'm staying away.