Welcome on back #ReagsReaders. Another winning day yesterday at 5-3. We'll take it. Texas free throws hurt and Pacific not knowing when the hell the game was supposed to start wasn't great. But 5-3 is 5-3. And here we are back again. Another day full of games. Not just full of games. We got a loaded schedule today. Champions Classic, Maui Invitational, Bubbleville. You can't beat it. 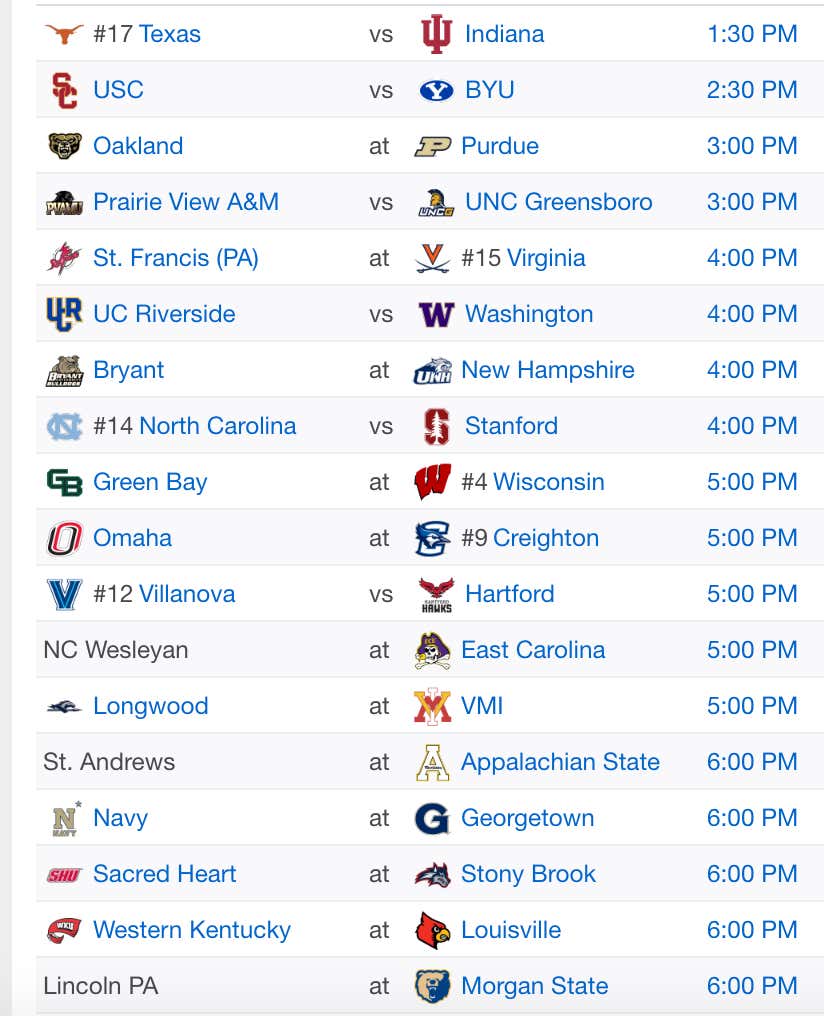 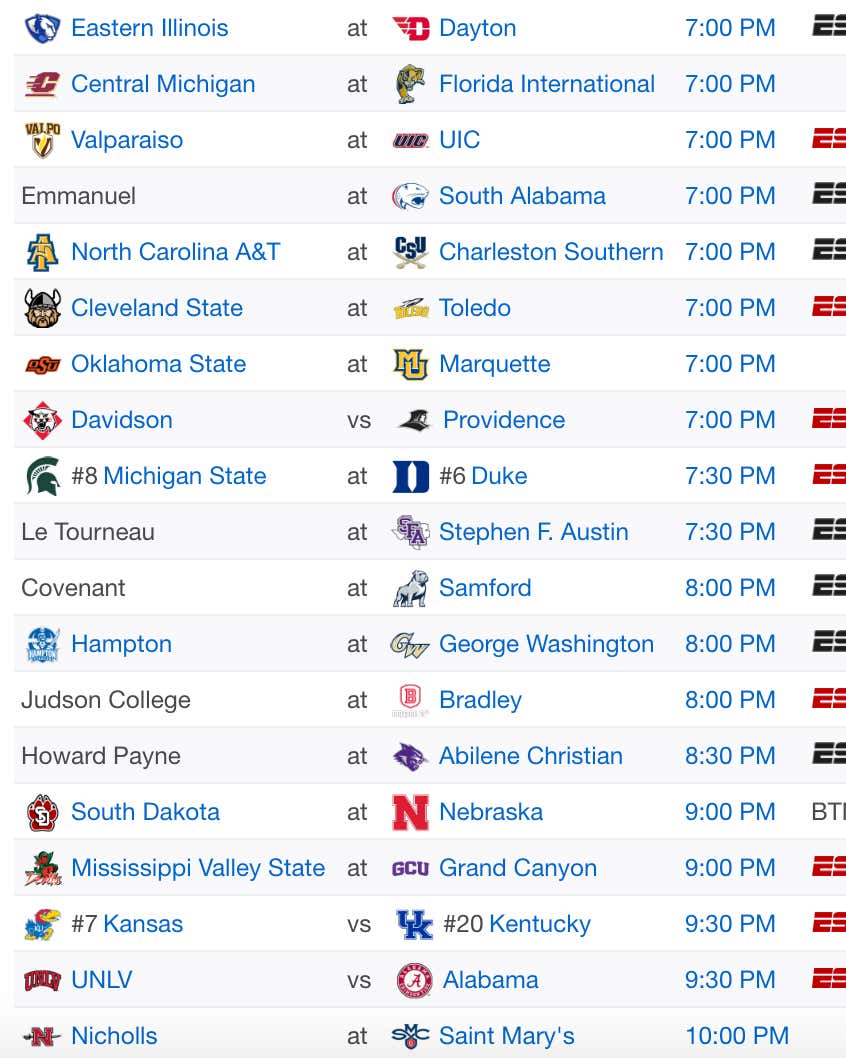 Game is at 2:30 in Connecticut

Reasoning: There's real no angle to play here for me. Both teams have played, both are traveling out east, etc. So I'm going with simply who I think is the better team. I don't see anything that has a guy like Evan Mobley or his brother Isaiah out. There are three main keys in this game for me. 1) Both teams fucking suck at the free throw line. Both are sub-200 on percentage so far in the season. Who can actually make a shot from the line? 2) Can USC take care of the ball? They are a bit turnover prone and BYU loves to force turnovers. 3) Who wins the battle in the paint. Matt Haarms, yep, that guy, is on BYU now. So they have a 7-footer to throw at Evan Mobley, who is one of the best freshman and players in the country. USC ranks 22nd in the country in 2pt% and 5th in Oreb%. BYU ranks 3rd in 2pt defensive percentage and 22nd in defensive rebounding percentage. It's a toss up so I'm going to take the points, especially with the hook.

Game is at 6pm at Louisville

Reasoning: I'm going to track this game for a side too. As of now Taveion Hollingsworth, the leading scorer for WKU is questionable and Louisville may get Samuel Williamson for this game. Those are two key players obviously. Now why do I like the over? Both teams make free throws. That's how we get to the number in a game like this. Also the fact WKU will try to speed the game up a little bit. We've seen Louisville be incredibly efficient offensively this year too. They are patient but they get to the hoop pretty easily. They also saw a team in Seton Hall who will try to speed you up defensively. Against a Memphis team that defends the rim well, the total was 143. I'm using that as a base here and taking the over.

Game is at 7pm at Marquette

Reasoning: You're looking at two pretty similar teams here. Advanced stats even say so. Oklahoma State's ranks are 42/33 on ORtg/DRtg while Marquette is 37/26. They both are slightly above average at not turning the ball over. Both shoot about the same amount of threes per field goal attempt. Both teams defensively run you off the 3pt line. So in a game where two teams are this even I'm taking the best player (Cunningham) and the points. I'm not worried about road/home splits so far this year due to the lack of fans too. The guy I think can make a real difference in this game though is Oklahoma State's Isaac Likekele. He's the exact No. 2 guy you want to run next to Cunningham. He has a year under his belt of being the guy at Oklahoma State last year and this year gets a bit less attention. If you want to take away Cunningham, they can give the ball to Likekele and get a bucket.

Reasoning: I'm playing experience here. Actually, I'm playing more against Duke's defense. They struggled defensively against Coppin State and Juan Dixon's modern offense of trying to spread you out. Well Michigan State can play a 4-out, 1-in offense with Hauser's ability to stretch the floor. Duke was also VERY turnover prone against Coppin State. Jalen Johnson, who was damn good with 19/19, had 7 turnovers too. Michigan State can force turnovers and get runouts against this Duke team. The biggest problem with Duke right now though is their best offensive 5 and defensive 5 are just so vastly different. They have to go with a completely different look depending what they want to concentrate on. Hauser should have a comfortable matchup against Matthew Hurt. More importantly Michigan State has the size and athleticism on the wings that could disrupt Duke.

Game is at 9:30 in Indianapolis

Reasoning: We saw how Kentucky looked against Richmond right? Well, Kansas has Marcus Garrett to throw on either Terrence Clarke or BJ Boston. Garrett legit might be the best defensive player in the country. Then they have the size to throw on the other guy and can give different looks. There's also David McCormack in the post to bother Olivier Sarr. The other main reasoning is both teams are not great at the line. Neither team is shooting over 71% from the line. At the same time neither team looks to shoot threes. They want to get to the hoop and you have athletes there that can protect the rim. I know both teams want to play fast, but you have a young team in Kentucky learning Cal's offense still while Kansas wants to play in the post and drives.

Reasoning: I don't know if it's Shaka's hair or what but Texas actually looks decent on offense. They are pushing tempo. They are letting the three guards operate and do what they do best. They are letting Greg Brown attack on ISO on the wing. They have rim runners at the big spot where they put in a high screen and dive. At the same time Indiana is playing faster than normal and have consistent play from Trayce Jackson-Davis and Race Thompson. One of the better things here for the over too is Texas is 11th in the county at getting to the line and 209th in the country in fouling. We should see free throws, just need Texas to hit some.

Game is at 4pm in Asheville

Reasoning: We know UNC wants to play fast. Stanford can do that this year. Especially with the experience they bring back - 4 starters and adding Ziarie Williams who was damn good against Alabama. They have guys that know how to score and won't be afraid of UNC. At the same time UNC is going to fly up and down while forcing turnovers. Stanford was turnover prone against an Alabama team that was awful defensively a year ago and UNC will jump and get free points. Stanford should be comfortable playing a fast pace. I know Stanford rebounds the ball well, but I'm trusting UNC to get their offensive rebounds here.

Game is at 4pm at Virginia

Reasoning: Strictly playing the angle of a Virginia bounceback here. This is their first game since losing to San Francisco and you're giving Tony Bennett that much time to come up with a plan and get to his team about defense. I'll take that. Speaking of defense, St. Francis relies heavily on forcing turnover. Virginia is 7th in the country at taking care of the ball. I'm banking on that to continue. Give me those two things plus St. Francis playing against Virginia's packline and we could see a blowout quick here.

Game is at 7pm in Asheville

Reasoning: There's no way Providence is as bad offensively as they were yesterday. They were getting clean looks too. It's not like they were just dicking around. They simply missed shots. They are too good for that to happen again. Davidson's defense is also nowhere near Indiana's. At the same time, Davidson's offense is still awesome. It always will be under Bob McKillop with the motion he runs. But Providence's defense is one of the best in the country at taking away the 3pt line. They are 20th in the country at giving up looks from the 3pt line and 39th in the country from a percentage standpoint.