Welcome on back #ReagsReaders. Decent day yesterday, especially if we pretend that Kentucky didn't play. I'd prefer to go back to drinking bourbon instead of remembering that disaster ... again. But we followed a 5-0 day with a 4-3 winning day. Would have preferred not to have the backbreaking three by Georgetown with 4 seconds left for the cover, but what can you do. Unfortunately we have a shitty slate of games today. I'll be honest if there aren't cancellations, this shouldn't happen. We should always have at least one good stand alone game. 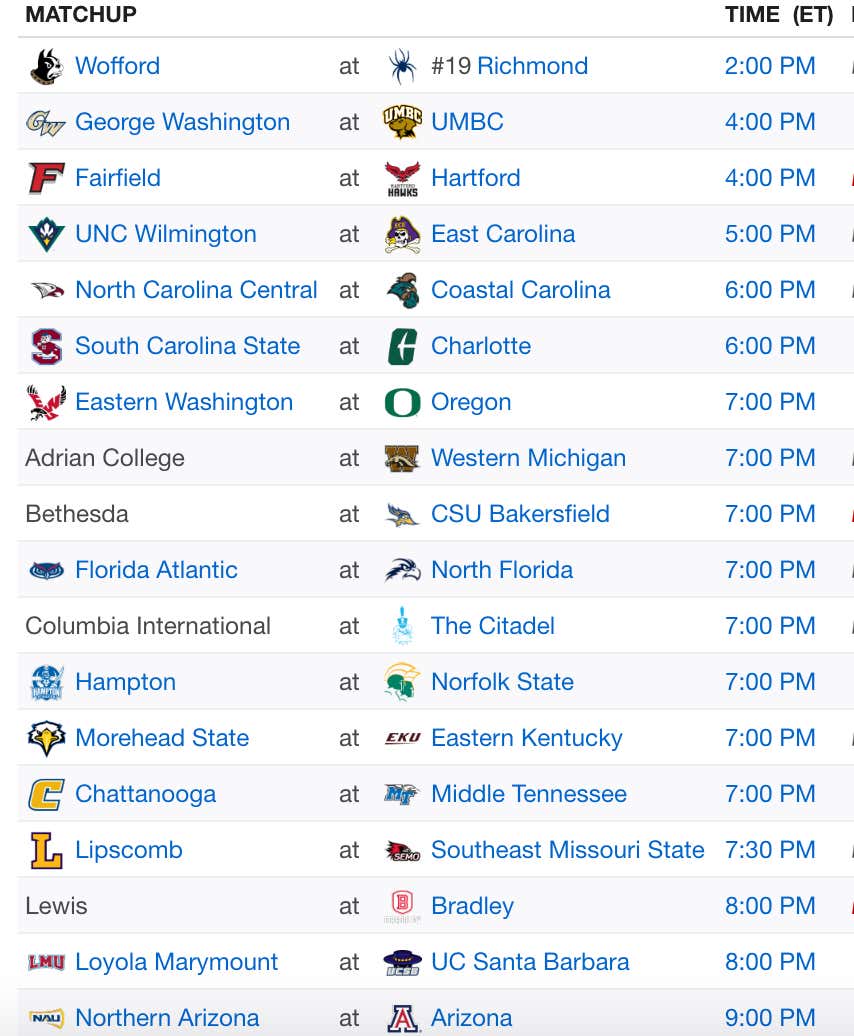 Game is at 2 at Richmond

Reasoning: A truly weird game here in the sense that Wofford has only played two non Division I teams before having two games cancelled. Richmond was on a short quarantine after beating Kentucky. Yes, Richmond forces tempo on offense, but that's mostly due to forcing turnovers and getting a quick possession. Wofford still has Storm Murphy (all-time name guy) who is an experienced guard that takes care of the ball. At the same time Richmond is a horrendous free throw shooting team. Wofford still runs that motion offense using a ton of screens that we saw them run with Fletcher Magee a few years back. Richmond shouldn't have a problem defending that. I know the number dropped a ton, but I don't really want to take a side here.

Game is at 7pm at North Florida

Reasoning: Again, we're full fade on North Florida without Carter Hendricksen. We faded them on Saturday and it worked perfectly. We're sticking with that here. Hendricksen is everything for North Florida. They run their entire offense through him. Outside of Hendricksen I don't trust a single person on that roster to get a bucket. That's it. That's why we're playing this game and the only reason why. We're fading until we lose.

Game is at 7pm at Norfolk State

Reasoning: Rivalry game in Virginia baby! But this is all about Hampton's offense. They crash the offensive glass, they launch threes and they play fast. On defense they actually have the 2nd quickest tempo in the country so far this season. Sure, Norfolk State plays a bit slower, but against that Hampton defense there are points to be had. On the flip side they lost Jermaine Morrow, their experienced guard. That means more turnovers, more steals, easier points for opponents. Norfolk is actually shooting the ball well from three -8th best in the country. We'll ride the over here.

Reasoning: I know Lipscomb doesn't have their backcourt to start the year in KJ Johnson and Tommy Murr, but this line still feels low. Lipscomb still has Ahsan Asdullah, who was kind of their do-it-all guy last year. He's their 6'8" big who averaged a double-double last year. Even without Murr and Johnson, they can play through Asdullah and use guys like Greg Jones as a shooter. SE Missouri relies on getting to the line for their offense and Lipscomb simply doesn't foul.

Game is at 8pm at UC Santa Barbara

Key player: Who else but this guy?

Reasoning: First, just look at the schedule. UCSB has only played two games against non Division I teams. Loyola has played Minnesota twice, once in a 3 point game, and two other Division I teams. Loyola is one of the biggest teams in the country, presenting problems at the rim with the ability to stretch the floor as well. Their size is paying off on the glass, ranking as an above average team both offensive and defensive rebounding. The biggest question for UCSB is its defense. They've struggled on that side of the ball and Loyola is 116th in the country currently in ORtg. If Loyola can take care of the ball, they win this game outright.