The final four wasn't necessarily "obvious" but these were the four that most would've guessed. It kind of stinks for these guys that they won't be able to come to New York for the ceremony, but it is what it is. Giving your winning speech over Zoom will be weird, but again, it's better than nothing.

The three that didn't make it were Breece Hall, Najee Harris, and Justin Fields. Najee may feel a bit "robbed" as he had 27 TDs this year with over 1600 total yards. Breece Hall had a similar stat line. You may be surprised to see Justin Fields as someone considered, although the Ohio State QB did put together a decent season: 73%, 15 TDs, 1500 yards in just 6 games.

Here are the current odds: 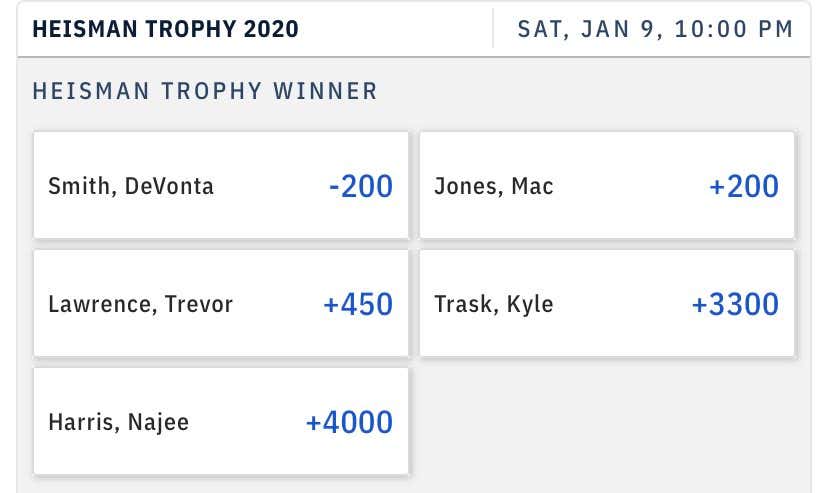 I'm kind of surprised to see Devonta Smith at -200…..I would at least put him at even with Mac Jones. Smith has gone for 17 TDs with 1511 yards receiving. A crazy season, but not one that makes him an obvious winner. The last WR to win a Heisman was Desmond Howard in 1991!

Trevor Lawrence is making a last-second push to win it as a career achievement award.

He just doesn't have the numbers to win it. If he won it over Mac Jones it would be, in my opinion, a joke. It's not a lifetime achievement award! It's the Heisman Trophy! If you don't like it you should've played intramurals. Take a look at Mac Jones numbers: