We start in Leicester.

Manchester United has been a very fun team to watch over the last 4 games, with 15.62 total xG (expected goals). This is thanks to their electric offense and questionable defense. Leicester's has had a bit of a different situation during the same period, with 9.16 total xG. Leicester has had the 5th most xG this year, but when you remove penalties, they move to 11th. This is really not a great sign for a team that has a defense that is incredibly average.

Manchester United has been one of the better away clubs this season. Ranking 4th in expected points per game. 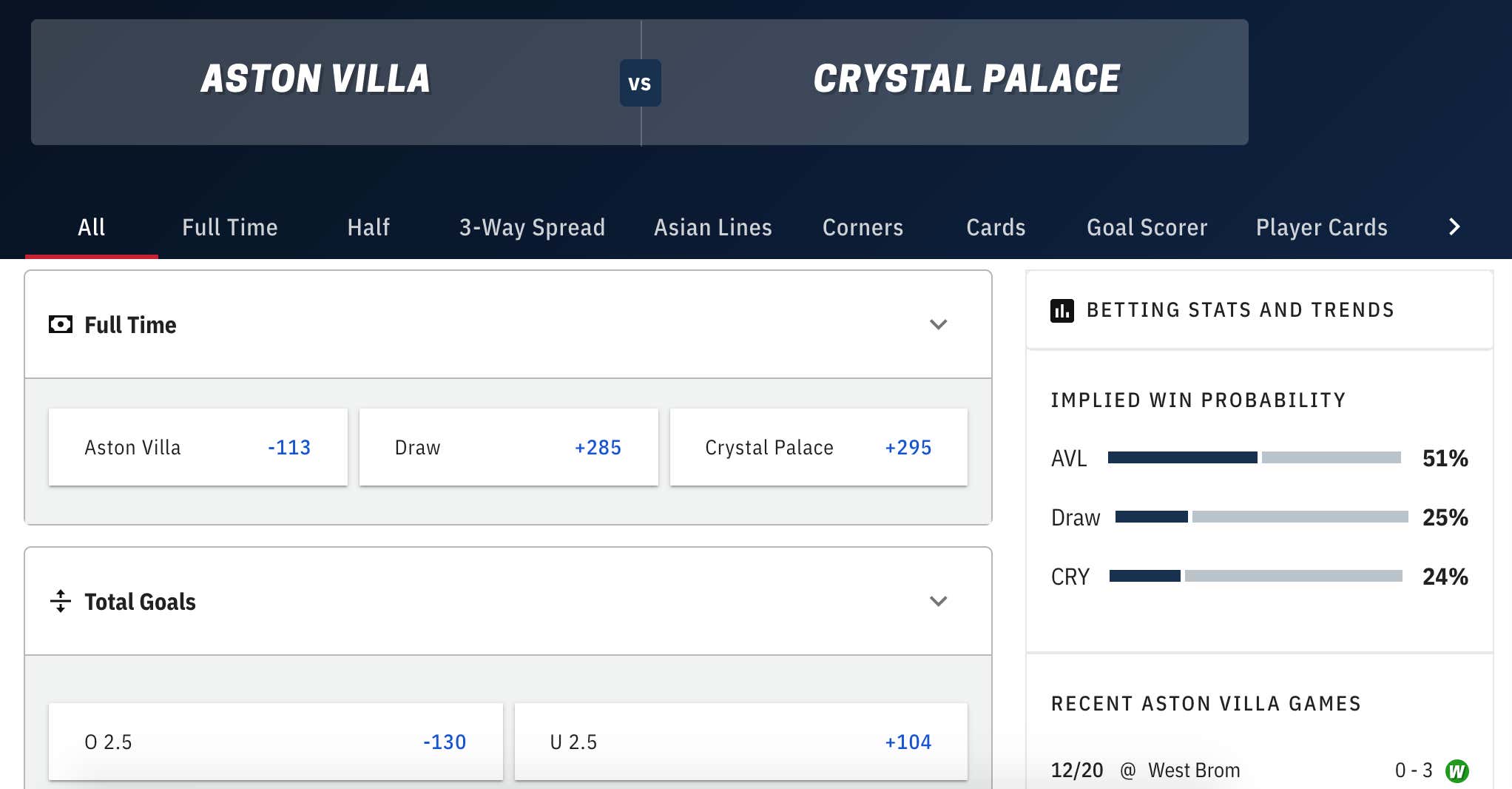 Aston Villa has been one of the better teams this month…averaging the most expected points per game in the entire premiership. Crystal Palace is off one of the worst games of the season, losing 7-0 to Liverpool….however I do think they may have some value here.

Of their last 4 games, they've won the xG battle in 3 of them, including games against Tottenham and West Ham. I think they could easily find a way to keep this game close and even winning it. The Premier League is a lot like the NFL…teams cover win (or cover) when you least expect it. 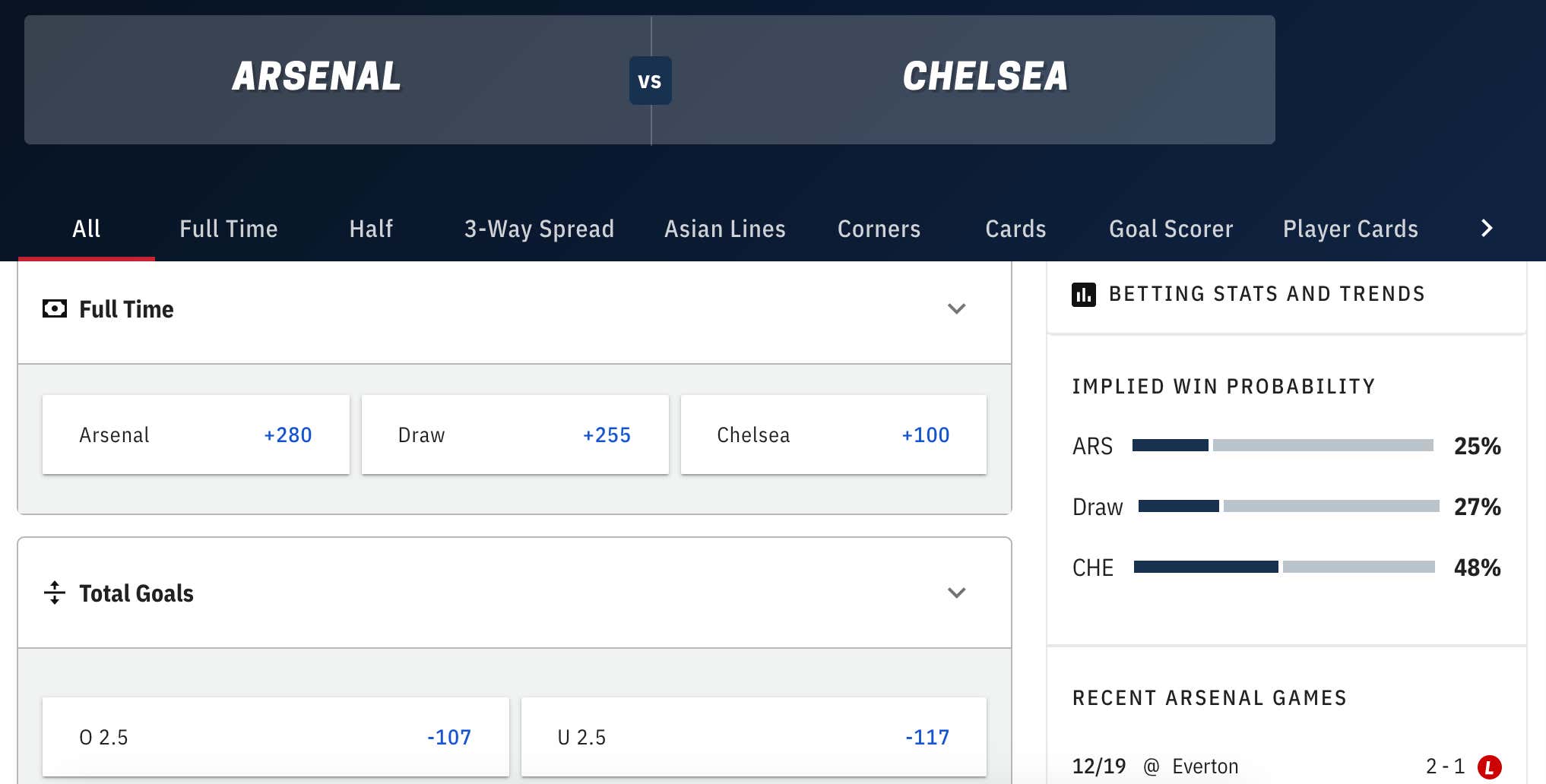 Ahhhh, Arsenal….all of December it has felt like they have been the worst team in the Premier League….but over their last 4 games, they have the 8th most expected points. They even have more expected points than Manchester United during the same time period!

I'm going to be a mad man here and take Arsenal to win or draw. Chelsea has shown to be one of the best teams in the world, but I have a weirddddd feeling that we may see a Boxing Day "miracle" in the Emirates! They're due! For Troopz!! 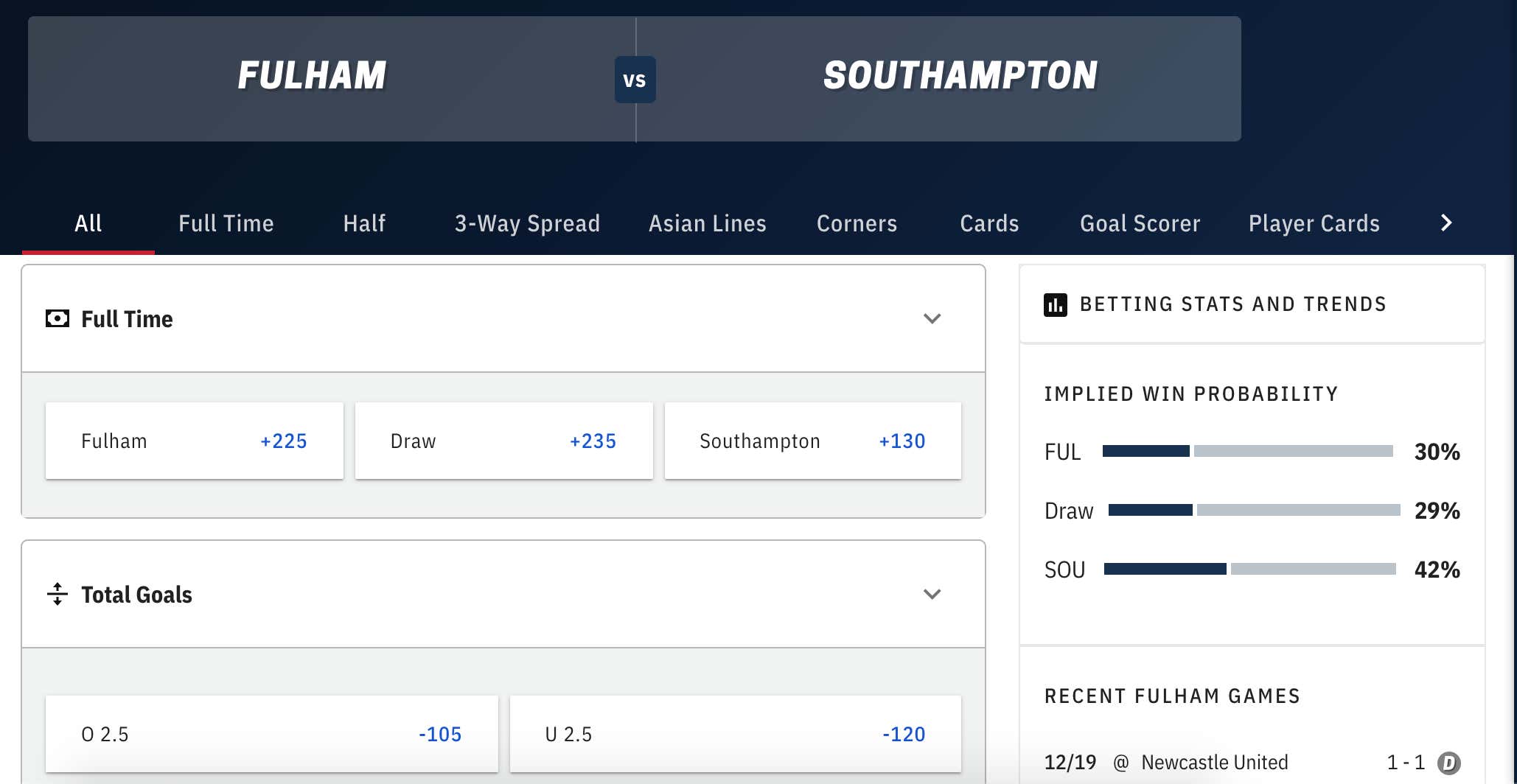 The fact they're 7th in the table annoys me.

The only team that has overperformed them is Manchester United.

Fulham, on the other hand, sits 18th in the table but has underperformed by 6 points or so according to Understat. That would put them around 14th, outside of the relegation battle. Of course, that's not how football works, so this is a big game for Fulham at home to make sure they stay out of the eventual relegation battle. They're undervalued here at home. 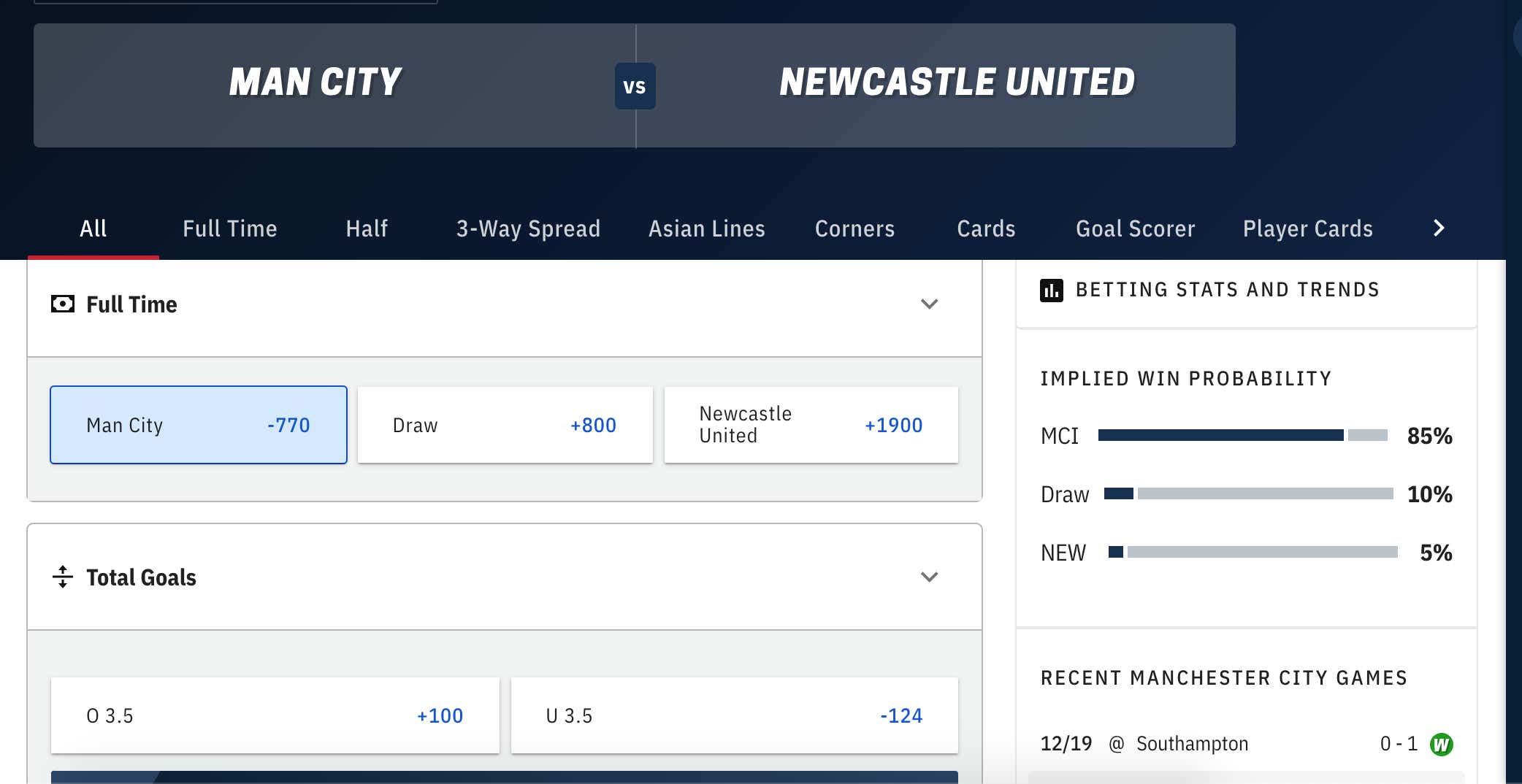 Over their last 10 games, BTTS (both teams to score) in Manchester City games have hit at a 70% rate.

Against Newcastle I definitely see this trend staying alive. Newcastle has averaged just over 1 xG a game and Manchester City's revamped defense, who has allowed under 1 xG per game, will shut them down. 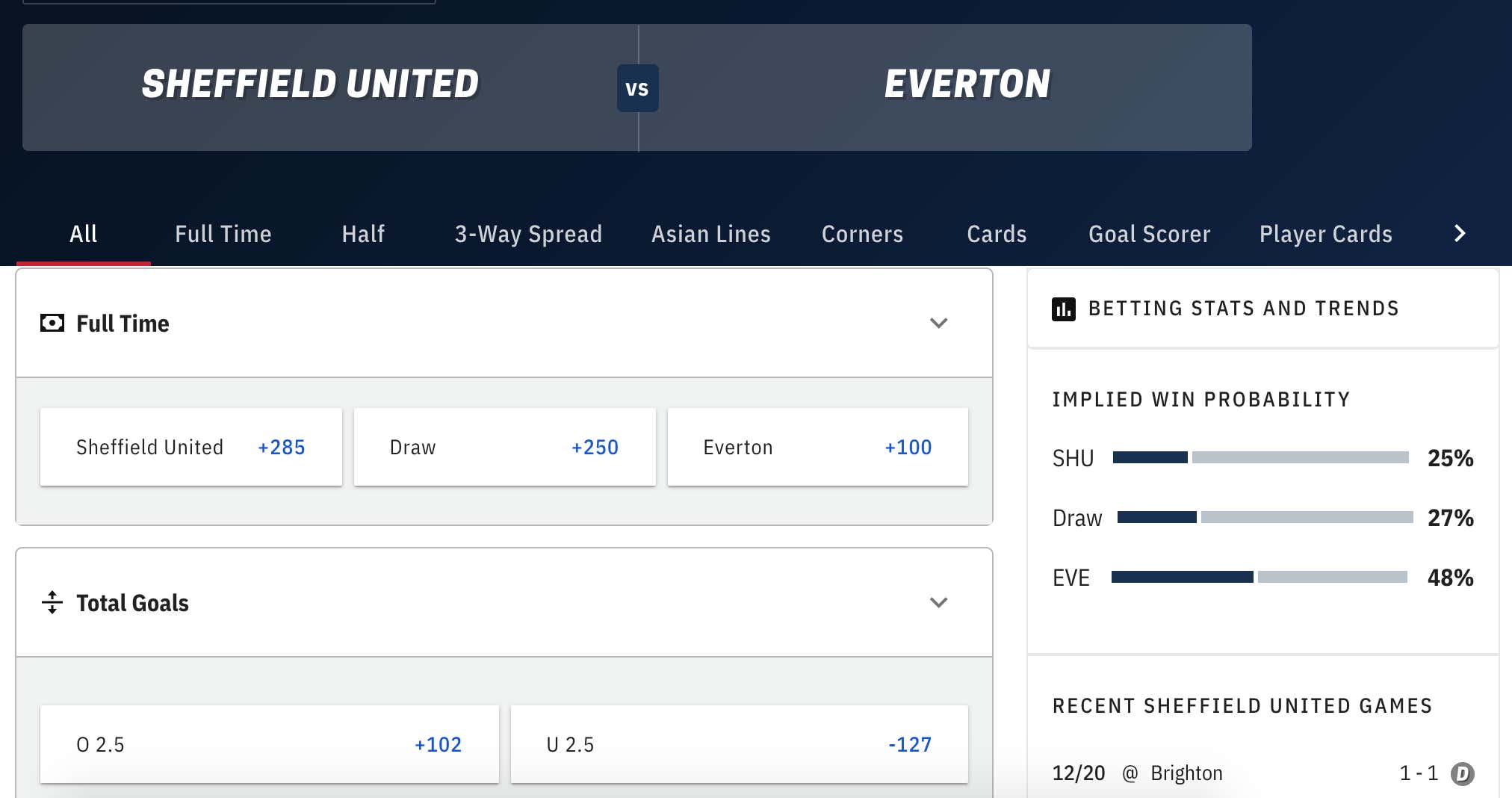 Let's take a look at both Sheffield United and Everton.

Today's total sits at over 2.5….I think we'll get to 3 based on these teams first 14 games of the campaign.