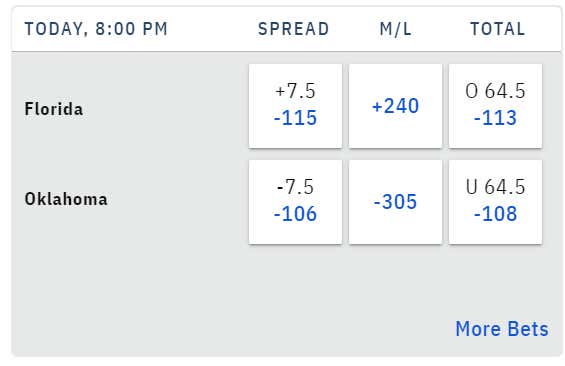 Our first NY6 of the season...Florida vs. Oklahoma in the Cotton Bowl. 8 PM. A nice little treat on December 30th.

This game opened at Florida -2.5....it has moved 10-points now. What has fueled this? Sharp money views Oklahoma as a very comparable team to Florida, which brought the number down to pick-em. This makes sense as Oklahoma ranks just behind Florida in most advanced ranking systems (FEI, SP+, etc.). After that, the opt-outs kept coming in for Florida on Offense: Kyle Pitts, Trevon Grimes, Jacob Copeland (COVID), and Kadarius Toney. Those are 31 of Kyle Trask's 45 TDs. That has led to where we are today with Oklahoma as a touchdown favorite.

Where Will Trask Turn?

Thanks to great recruiting, Mullen will have some serious talent to put out there for Trask to connect with. Justin Shorter, former Penn State WR, has shown to be reliable for Trask and the same goes for (former) backup TE Kemore Gamble. Expect both of these guys to be featured heavily in tonight's offense. RB Malik Davis has caught 29 balls for over 300 yards receiving as well.

Oklahoma does not have the greatest reputation for having a stout defense, but their 2020 unit hasn't been bad at all. Let's look at some of their rankings:

With a bunch of opt-outs on Florida, your mind may go to "oh, it won't be that big of a deal against Oklahoma's defense." That may have been true in the past, but this year? Not so much. Trask is going to face a huge test in this game.

The highly recruited QB had a rough start to his college career, throwing 4 INTs in back-to-back losses against Kansas State and Iowa State. Since then? He seems to have found a groove in Oklahoma's passing attack. He finished the season ranked 12th in QBR nationally. Oklahoma's offense ranks 6th in SP+.

Tonight, he'll be going up against a Florida defense that kinda stinks. They do rank 31st in SP+, but 97th in EPA/play and 87th in EPA/pass. Rattler and Oklahoma may carve the Gators up tonight.

In the past, I've discussed the loser of the SEC Championship hangover. Let's take a look at how that trend has been doing.

2-3 SU, 2-3 ATS. Small sample size. Probably not that big of a trend, but Florida's motivation may be in question here. A load of their stars won't be playing. They've lost 2-straight, while Oklahoma is coming into this one having won 7-straight.

I'm going to be on Oklahoma. I am definitely getting the worst number here, but I don't really care. I'll also be on them 1st half. They've dominated the 1st half this year with a point differential of 17, this drops significantly in the 2nd half.