Back before he was saving small businesses, Dave was on Twitter trying to find a way to save Army's bowl season. Luckily, the good folks from West Virginia stepped up and accepted the Liberty Bowl's offer to play Army after Tennessee dropped out due to COVID-19 cases within their program: 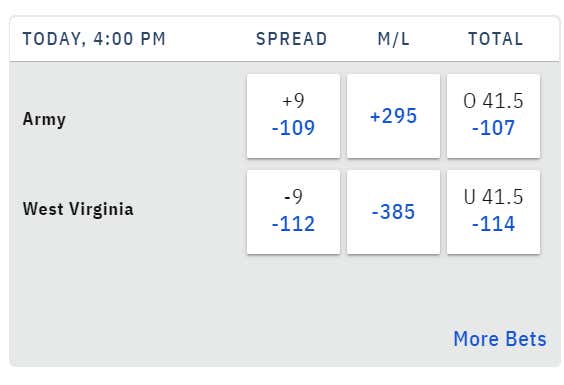 An angle you have to handicap in every bowl game is the motivation for both teams. We know that Army is going to come to play, but what about West Virginia? Will the 4-4 Mountaineers care that much about this game? I'm not 100% sure. Playing in a bowl game after a disappointing end to the season is tough and then add in you're facing the triple-option? The motivation edge is definitely in Army's favor.

Playing in the Big 12 and having one out of conference game (Eastern Kentucky), West Virginia hasn't seen anything like the triple-option all year. On top of that, this isn't a normal bowl season for them and they weren't told they'd be playing Army until 10 days ago. That leaves them about a week to prepare for it with travel and Christmas. That's a massive advantage for Army.

The good news for West Virginia? Their underlying statistics are pretty good to defend the triple-option. They rank 36th in EPA/rush on defense and 26th in line yards. Their defensive line is stout, but will they be up for the task against a rushing attack they haven't seen this season? My guess is they won't get gashed by Army, but the 4-yard gains will add up. I see a lot of 15-20 play drives for Army that drain the clock.

I'm not the biggest fan of trends, but some are definitely useful, especially in service academy games.

In games where there is a spread of more than a touchdown and a total under 42, playing the underdog has hit 57% of the time.

In a game with a short total like this, everything matters. Starting with better field position and pinning your opponent deep when you force a fourth-down situation is key. Army holds the advantage in this game, ranking 9th in SP+ special teams while West Virginia ranks 71st. Army's punter Zach Harding is one of the best in the nation: