Welcome back #ReagsReaders. Another .500 day yesterday because apparently that's the way this year is going to go. A relatively quiet night in college hoops. Only two top-25 teams loss last night and one was Minnesota to Michigan, who I blogged about this morning. The other was Virginia Tech losing as an underdog to Louisville. Duke, who I have no idea how they are ranked still, snuck out a win over BC because all BC does is blow leads. The game I want to talk about quickly though is Creighton beating Seton Hall by 30. Seton Hall is a good team. They look like a Tournament team. Creighton doing that is damn impressive. Why? It wasn't the offense that impressed me. We know what Creighton can do on that side of the ball. It's the fact that this is probably the best defensive team McDermott has had at Creighton and that includes losing Ty-Shon Alexander, the best defender from last year's team. I'm bullish on this Creighton team. They can make a Final Four, no doubt about it. What sucks is if they had Alexander I really think they are the 3rd best team in the country. That is the biggest loss to the NBA Draft that people don't talk about enough. Anyways, I might go deeper on them later, but wanted to talk about them quickly. Let's move on to tonight. 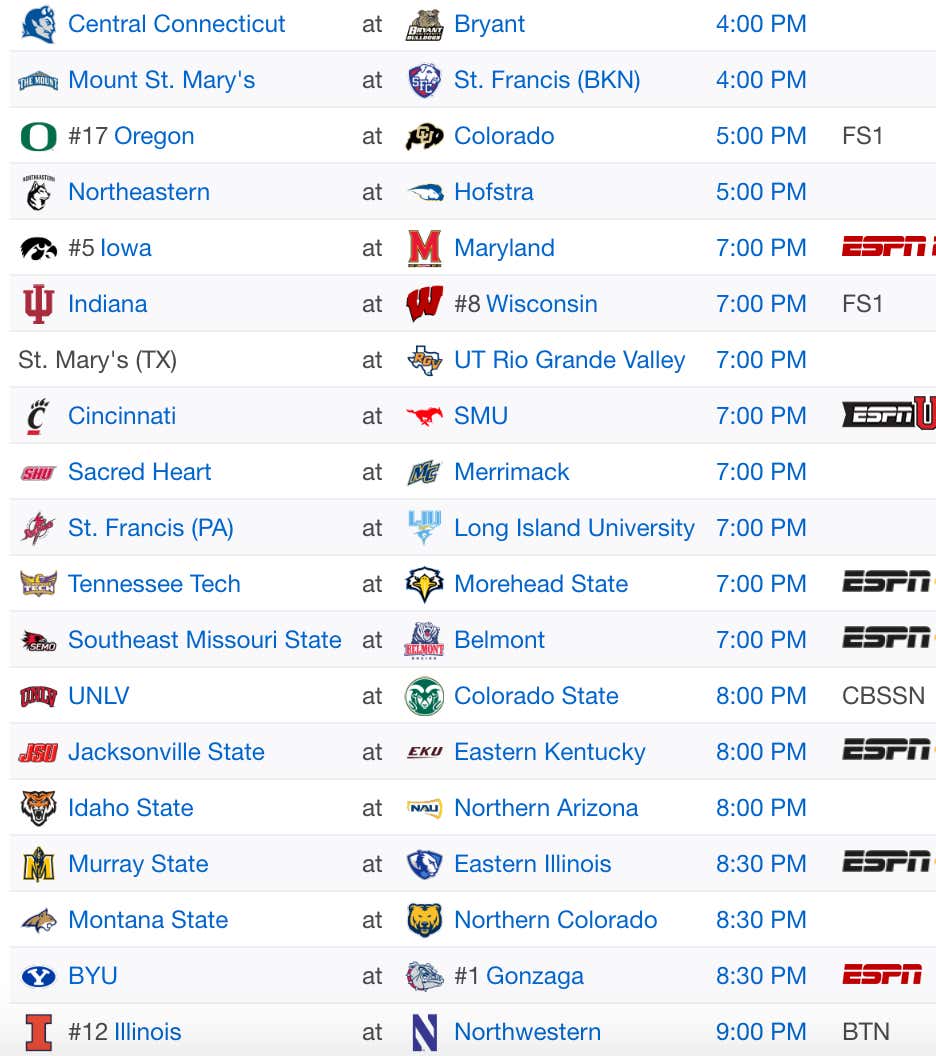 Game is at 7pm at Wisconsin

Reasoning: Yes, Trayce Jackson-Davis is a damn good player, but it's worth noting that last year against Wisconsin he averaged just 7.5 points per game. That's a massive drop off. Remember, this is the same exact Wisconsin team from last year. It's not like there was someone there that was designed to defend him and left. Wisconsin's defense is made to take away shots inside the paint. They are 8th in the country in defensive 2pt percentage. That's where Indiana thrives. If they get stuck and start shooting, Wisconsin wins in a blowout. There's a massive difference in Wisconsin shooting 41% from three while Indiana shoots 32.7%. This game will be played at a slower pace which is fine for Wisconsin. Another huge advantage here is the FT shooting difference. If it's close late and Indiana is fouling we can get to that number because Wisconsin shoots 75% from the line as a team.

Game is at 7pm at Maryland

Reasoning: I'm strictly playing an under here for two reasons. The first being Maryland wants this game to be in the low 70s at most. They are one of the slower teams in the country. They use that half press to waste time and bother teams before dropping into the halfcourt. That should slow Iowa down a bit. The other is Luka does struggle against athletic bigs and bigs that can match his power. Maryland, while they don't have depth, does have athletic bigs that can bother him a little bit. Don't get me wrong he'll get his, but it should take more stops. Maryland's offensive numbers are also a bit inflated from overpowering mid-majors early on. In Big 10 play they are 11th in the conference on adjusted offensive numbers.

Game is at 9pm at Northwestern

Reasoning: Fuck it, I just love this Illinois team. This isn't even the best matchup for them since they can spread out Kofi Cockburn, but Kofi has been awesome lately. That's why we're taking the over. Both teams can play fast and get up and down while Kofi is a huge mismatch both ways. If Nance can spread him out and put him in some ball screens Northwestern can score. At the same time, who stops Ayo? I'm just buying this Illinois team, even on the road as a favorite here. If Kofi can stay on the floor he will have buckets simply by rim running. There's also a HUGE advantage on the glass. Northwestern doesn't get offensive rebounds while Illinois is one of the better offensive rebounding teams in the country.

Reasoning: This is Arizona State's first game since December 16 because of Covid within the program. They are a team that typically wants to play fast, but they just might not have the legs here. They may have to slow it down more than they want along with UCLA and Mick Cronin being able to slow it down. It's also worth noting that UCLA loses Chris Smith for the year to a torn ACL, which sucks. He could have been in the NBA Draft last year, came back and tore his ACL. That's a huge loss for UCLA's offense. Defensively ASU relies on getting turnovers and UCLA is one of the best teams in the country at taking care of the ball. I expect that to be the case since they've had more games recently too. Again, quarantine and playing teams in spots like that matters.