We did it. We finally fucking made it. We made it through the season in more or less one piece. And here we have my final blog, or at least the final stats based one for the year. Let me know what you want in the off season, I need ideas. BUT, we’re here at the national championship. Many people thought this title would come with an asterisk due to the pandemic, but I think we can now all safely say that there is no asterisk in sight. While you're here, remember to tune into our live stream for the game, and/or listen to our (Unnecessary Roughness) Championship Preview episode. I’m excited for this game, and just hope it’s a good one. So, for the last time this season, let’s get to it.

Here’s also some more ranking comparisons. It is the last game, I’m going to give you all I have. I know I’m sure as hell not confident about this game so maybe you’ll see something better in the numbers. 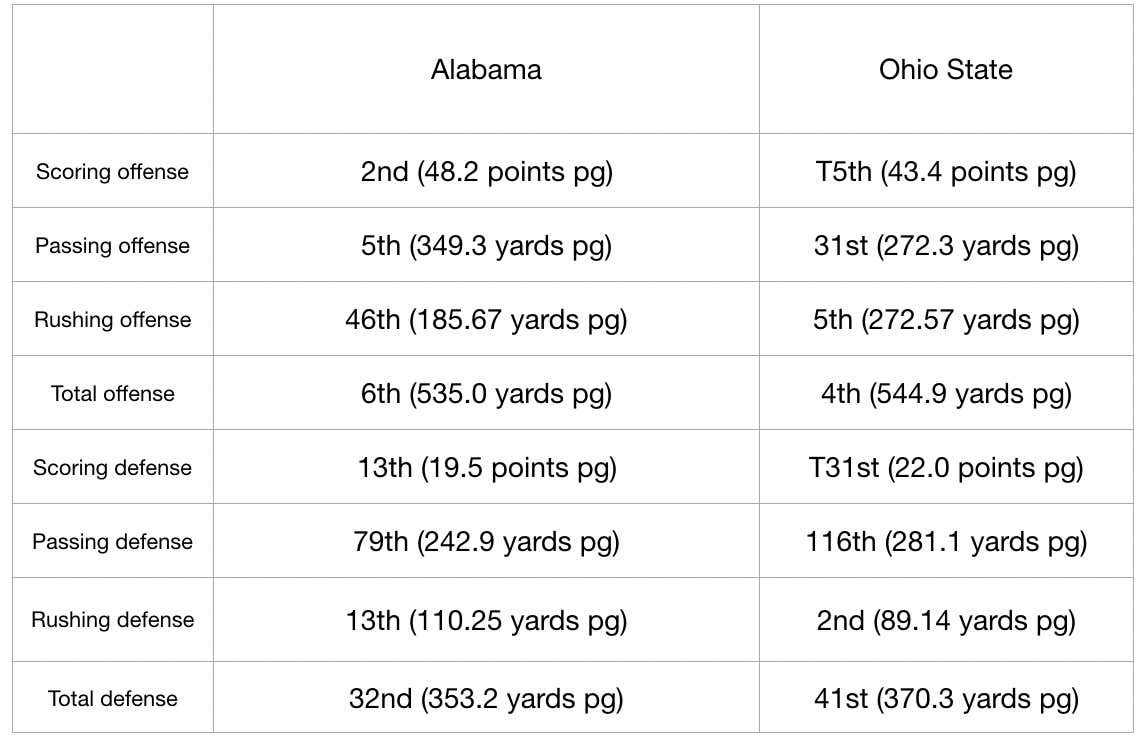 The over for Alabama team points is my favorite bet here. Right now it’s at 42.5. You’re telling me that anyone is stopping the offensive powerhouse of Jones, Harris, Smith, and potentially Waddle? Remember that Clemson still put up 444 yards on Ohio State. Yes Ohio State held them to 44 rushing yards, but Alabama has way more offensive weapons. I think for both teams it will be a shootout but I have a little more confidence in Alabama’s offense than Ohio State’s. That said, I want Ohio State to win. How possible do I think it is? Ehhh possible for sure, but so many things will have to fall into place. Alabama has more room for error than Ohio State does. I’d pick Ohio State to cover so I can be on the right side of history, but I don’t have the balls to lock it in. I think Alabama wins in a blowout or Ohio State wins by a touchdown or less.

If you do decide to bet on these, please do so responsibly. Hell I might start betting next year. FUCK. I DON'T WANT THIS SEASON TO BE OVER.