What a weird season it's been. In August it looked like we weren't going to get it, but we sit here on the day of the National Championship. Alabama....Ohio State. 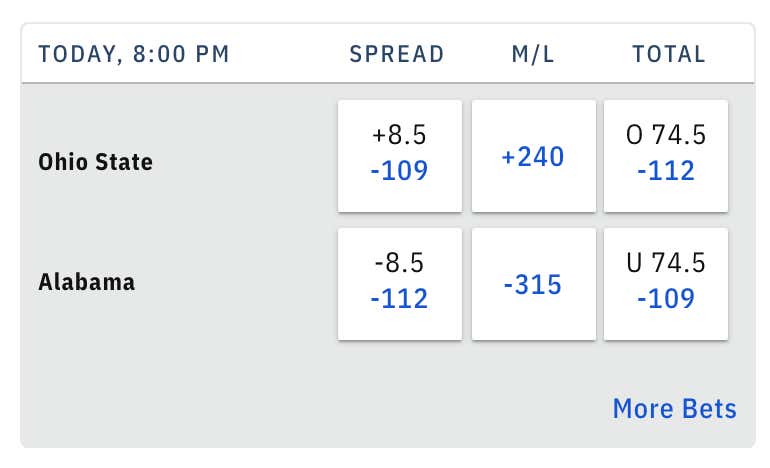 One more game. Only a few more bets. It was a fun season. We'll probably never forget the COVID season. Let's get into my feel for this game.

Justin Fields had a phenomenal game against Clemson. It wasn't a "once in a lifetime" game because that's just how good Justin Fields is. Alabama's defense ranks 74th in stopping explosive plays, while Ohio State's offense ranks 27th in that same stat. With everyone healthy that ranking would be much higher, as shown in the Clemson game, where their explosiveness would've ranked as the 2nd most explosive offense in America.

We've seen what Florida and Ole Miss can do to Alabama (48 and 46 points allowed), I think Ohio State can do the same.

Alabama's back half have struggled against explosive offenses all season, especially FS Daniel Wright. They rank 92nd in defensive passing marginal explosiveness. I expect a BIG day for the Ohio State passing attack.

The emergence of Trey Sermon has been phenomenal for Ohio State. He emerged at the right time and dominated Northwestern and Clemson. This has been reflected in the stats, Ohio State ranks 4th in line yards and 5th in opportunity rate (both definitions here). Alabama's defense? Hasn't been great against the run. The Tide rank 56th in line yards, 52nd in opportunity rate, and 51st in EPA/rush. When Ohio State needs yards tonight? They'll get them.

I see Ohio State getting both the rushing and passing game going in very successful ways tonight. Sermon extending drives, keeping Alabama's offense off the field. It's also worth noting that Justin Fields can use his legs tonight and the QB that historically beats Alabama is the one who can run.

Landon Dickerson's injury for Alabama is a big deal for tonight's game. The Tide without the country's best center could be costly. An offensive line that had 4 studs on it has now turned into one with 2 shaky offensive linemen.

According to PFF, the best pass-rushing team in the country is Ohio State. It's how they took down Clemson, pressuring Trevor Lawrence all night. Mac Jones has been very good against pressure this year, but if Ohio State's pass rush can dominant how I think they can, the non-dual-threat QB could have a challenge he hasn't faced this season.

I am concerned when it comes to Ohio State's Achilles heel. They rank 73rd in stopping passing explosiveness this year and rank 52nd in EPA/pass. Facing Alabama's historic pass offense will only be more of a challenge tonight if Jaylen Waddle plays.

The good news is Ohio State has an elite rush defense, which ranks 2nd in EPA/rush. Their only real issue defending the rush is stopping explosive plays, but Najee Harris and Alabama? Not an explosive rushing attack. They rank 97th in rushing explosiveness.

OSU may have benefited from Clemson not having OC Tony Elliot on the sideline for their CFP semifinal game. There were points where it looked like Clemson had no idea what to do on offense.

Sark will be calling plays tonight for Alabama, but has his mind really been on Ohio State? He was just hired by Texas. This may not end up being a big deal, but it's something to note.

I don't foresee a situation where Alabama doesn't find offensive success tonight, but the same goes for Ohio State.

Justin Fields and Chris Olave/Garrett Wilson will have the opportunity to connect for explosive plays, especially after Trey Sermon exploits a less than stellar Alabama run defense. Ohio State will have the ability to score 40+ points tonight, just like Florida did.

On defense, Ohio State's pass rush needs to impact 3-4 drives. Going up against an injured offensive line, Ohio State will have the chance to do that. Stop Najee on 1st down, sack Mac on second down, and then hold Alabama on third. If that doesn't happen on every drive there is no reason to panic. The offense will keep you in the game. All that is needed is 3-4 drives to be impacted. Alabama can score 42 tonight and OSU can be on top at the end.

That's the game script for Ohio State to win. I think they can do it.