Welcome back #ReagsReaders. A nice little 7-3 Saturday and we're back today. I always love when we get a loaded slate on the day after the national title game. I still won't ever forget the Kansas/Oklahoma game a few years back where it was Buddy vs Frank Mason that really got everyone in the college hoops mood. We need that again today. What I do want to mention real quick is Boise State. Start paying attention to them, because they are fucking good. They aren't last year's San Diego State team good, but they are 11-1 and a top-50 team in the country for me. The only loss was the first game of the season to Houston and they are beating up on weaker teams. That's the only thing really holding them back. They have 1 top-200 win and that was BYU. But just watch them. They have a star in Derrick Alston and just got Arizona transfer Devonaire Doutrive on the court. They get two games against Utah State and two games against Boise State to end the season. We could be looking at them as a true at-large bid no matter what happens in the MWC Tournament at that point. Let's get on to today's games. 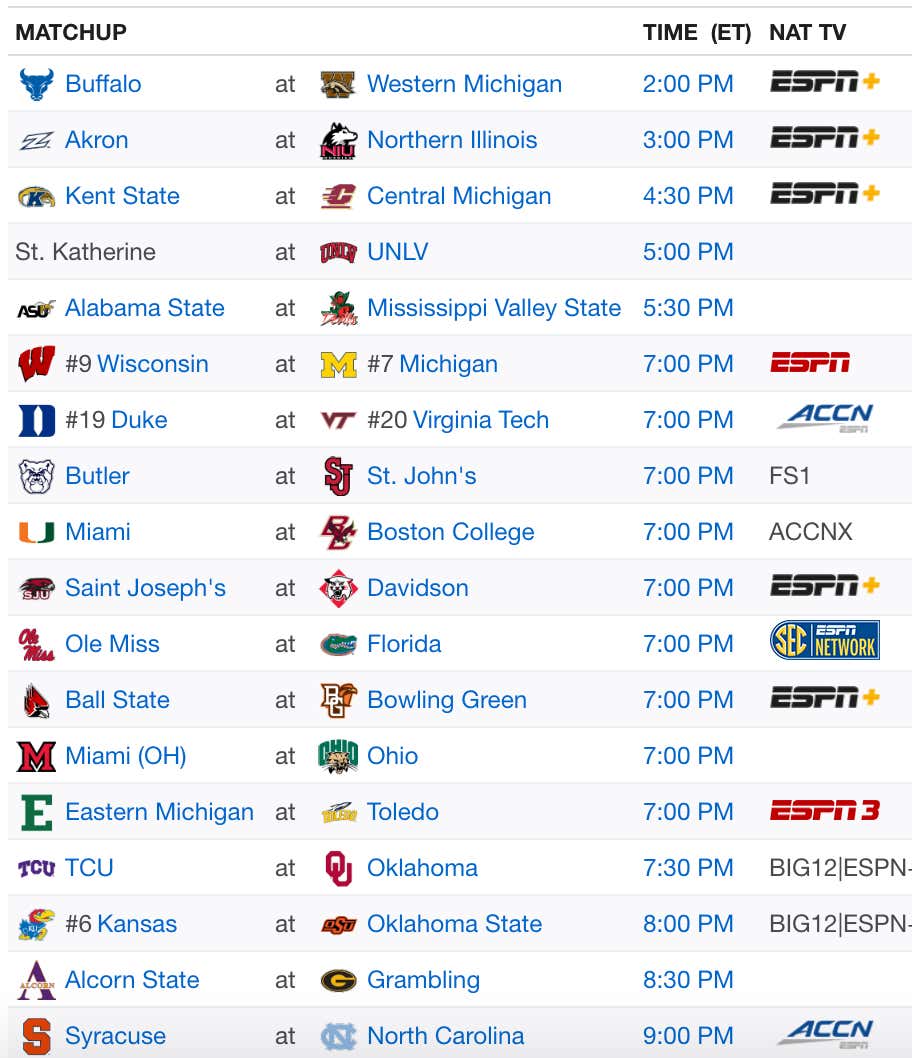 Game is at 7pm at Virginia Tech

Reasoning: There are two major mismatches to take advantage of here. Virginia Tech is a good defensive team, but that is reliant on taking away the PnR. Duke doesn't use much PnR. They are more of a space and attack offense. That gives more room for DJ Steward to attack and Matthew Hurt for open looks. Defensively Duke is weak inside. Hurt isn't a great defender, Jalen Johnson is a game-time decision. Tech's best player is 6'9" Keve Aluma, who is pretty damn good. Duke still runs teams off the 3pt line, which will deter Tech some since they run Mike Young's Wofford's offense. But Duke is just 176th in the country in 2pt percentage defense. That opens shit up for Aluma.

Game is at 7pm at Florida

Reasoning: I love bounceback games and this has Florida written all over it. They got their ass kicked by Kentucky, which I enjoyed. But now they are home again against an Ole Miss team that struggles against pressure. Yes, Mike White should be having this team play faster but we know what they do defensively. They apply full court pressure and actually press. It's not just a distraction type press we see teams run. At the same time, Kermit Davis still runs that amoeba zone defense he made famous at MTSU, which is a little bit of a concern with Florida's stagnant offense. Both teams thrive on turnovers and turn it over a decent amount offensively. I'm still somewhat high on Florida with Mann/Lewis there and will take them here in a bounceback spot.

Reasoning: Hunter Dickinson isn't just one of the best freshmen in the country, he's one of the best player. That said, Wisconsin has Nate Reuvers and Micah Potter, two guys that can defend him in the post - Potter more in my opinion. But what I like most about this Wisconsin team is D'Mitrik Trice. He doesn't get enough pub. He's been in college forever and is a great scorer. I know it's weird to say about a guy averaging under 15 per game, but Wisconsin's tempo has more to do with that than anything else. They use that swing offense and get him in the right spot where he can use a pick or go ISO. We saw him close Indiana out by doing that and getting to the free throw area pretty easily or to the rim. Another key here is how great of a defensive rebounding team Wisconsin is. Michigan is good at getting to the offensive glass and can limit Michigan's possessions there. This is no doubt the best game on the day and two of the top-4 Big 10 teams in some order with Illinois and Iowa.

Game is at 8pm at Oklahoma State

Reasoning: This just feels like one of those games where we get to see how good Cade Cunningham is. The projected No. 1 pick has been good all year, don't get me wrong, but a chance to show out against Kansas? Feels like a 25 point night for him. Oklahoma State does a great job at bothering you inside the paint. They rank top-30 nationally in defensive 2pt percentage. Yes, David McCormack has been better for Kansas, but if they are going to drive they are going to have a tough time finishing. There should be a ton of possessions in this game too since both teams want to get up and down the court - both top-85 nationally in tempo.

Game is at 9pm at Kentucky

Reasoning: The return of Keion Brooks really changes this Kentucky team. He's a good player, yes, but really it's about fit. Kentucky plays Brooks at the 4 where he can guard on the perimeter and defend the paint. That allows them to play just one big with Sarr/Jackson there and can switch everything and give them more spacing on offense. With the emergence of Dontaie Allen as well, the offense actually looks average vs bad. Alabama will speed this game up and jack up threes, but UK has actually defended the three ball well this year. The biggest advantage for Kentucky in this game though is the lack of size for Alabama. UK is a great offensive rebounding team and should be able to get some free points there tonight. If they can keep taking care of the ball like they have in recent games, they win this game. Also if they keep playing the true lineup of Mintz/Askew/Brooks with Allen/Boston/a big. That's the best case scenario going forward. Also keep an eye on whether or not Jahvon Quinerley plays tonight for Alabama.