Welcome on back #ReagsReaders. Honestly we have a weird slate tonight. It's loaded, don't get me wrong, but the numbers are tough today. This is the type of slate I want to see more of though during this time. Right now it's way easier to get eyes on college basketball with no football for a couple weeks. It's no secret that dominates the news, but we can get a few more eyes on actual games during the week now. I almost wish college hoops could flex games so that we have more awesome standalone games and loaded slates like this. Let's get into the games. 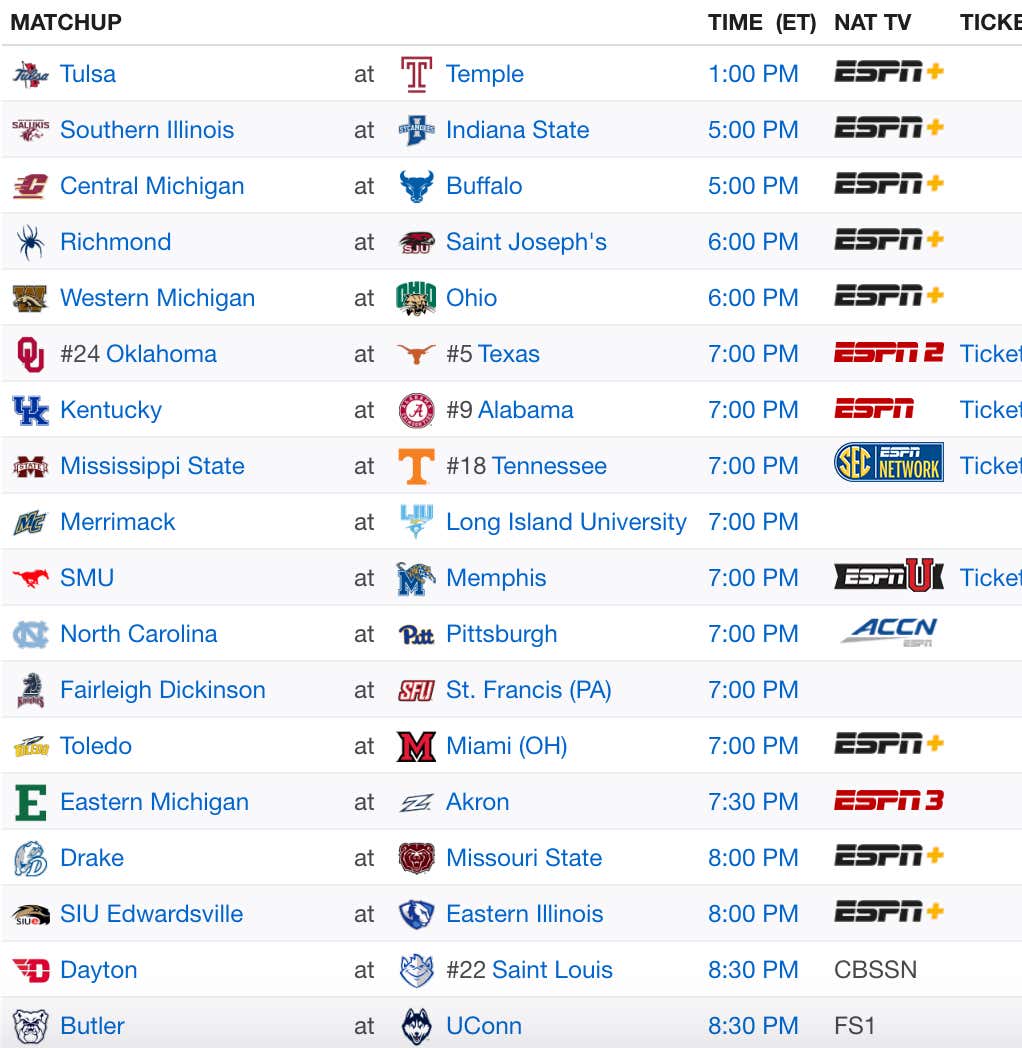 Game is at 7pm at Texas

Reasoning: I actually love this Texas team. This is way different than most Shaka teams we've seen in the sense of they can actually score. But I'm playing this as a spot play. It's the first game Texas will play without Shaka Smart, who is isolating due to coronavirus. At the same time we're not 100% positive who is and who isn't playing due to contact tracing. Oklahoma has covered the last 4 games, winning 3 outright. Oklahoma's defense is set up by sagging big time and daring you to beat you from three. I'm okay with that in this game even if Texas is an above average 3pt shooting team. They can get a little trigger happy and we're going to bank on a few missed threes here. We'll see a ton of pick and pops by Oklahoma and that's something Texas struggles with.

Game is at 7pm at Memphis

Reasoning: We're going back to a spot play here. SMU has a quick turn around from UCF to Memphis and two completely different defenses. They also don't have their head coach for this game due to a positive COVID test. We're starting to figure out Memphis a bit. They struggle offensively, but they defend their ass off. They currently are 4th in the country in AdjD. They force turnovers, they block shots and they challenge every shot. As much as I love Kendric Davis for SMU, the Memphis defense is tough to prepare for, especially on the quick turnaround. Memphis should also take advantage on the offensive glass. I expect an ugly game, which is fine for Memphis.

Reasoning: Another spot play for me. Saint Louis is a damn good team. They deserve to be ranked. But do you know the last time they played? It's been over a month. That game was against UMKC, who is quite bad. Do they have the legs to still run that uptempo offense? Will they have the legs to finish a complete game against Dayton? We're also in a bit of a bounceback spot for Dayton here. They were AWFUL against VCU. Couldn't score, looked like a JV team. It's hard to imagine they'd do that two games in a row. Saint Louis wants to beat you by getting to the rim and offensive glass. Dayton isn't a great rebounding team but they are pretty good at walling up. 9 just feels a couple points too high for a team coming out of quarantine.

Game is at 9pm at Duke

Reasoning: Yes, I understand that Jalen Johnson is a game changer for Duke and we saw that against Pitt. But he's still foul prone and why would you take Duke right now giving 5.5? I expect to see a bit of that junky/weird zone that Georgia Tech used against Kentucky. Duke is not shooting the ball well at all. During this losing streak they are shooting just 29% from three as a team, Matthew Hurt included. Hurt is the one that can kill you from three and that's something you live with here if you're Tech. They do a good job forcing turnovers, ranking 44th in the country in turnover percentage but more importantly 10th in steals. Duke is average at best at taking care of the ball. There's also not that huge home court advantage we typically see for Duke.

Game is at 9pm at Auburn

Reasoning: Am I buying a bit too high here? Perhaps. But there's no denying what Sharife Cooper does for Auburn. They are a completely different team with him AND we still haven't seen him with Justin Powell. There's a chance Powell can play, he's still listed as day-to-day with a concussion/head problem. With Cooper though, Auburn is 4-1 ATS with the lone loss coming by the hook to Alabama. Not too shabby. He's one of the most gifted passers we've seen and defenses have to change how they guard Auburn now. We saw Arkansas run a double at him and faceguard. We saw other teams just play straight up. The question is can Missouri defend in transition. They might throw Dru Smith on Cooper to use size, but I don't know if they have anyone that can stay in front of Cooper, which then gives up the kickout open three.

Game is at 9pm at Texas A&M

Reasoning: Bounce back, bounce back, bounce back. LSU's defense is bad but it can't be THIS bad right? They got abused by Alabama and Kentucky last week. Now they get to play a Texas A&M offense that isn't great. I say that as someone who thinks Buzz is a hell of a coach, but this is the 198th offense in America. They'll try to slow the game down, but we saw LSU beat them by 30 in the first game. A&M gives up looks from three while LSU is an average 3pt shooting team. At the same time LSU should kill A&M on the glass. Both teams are turnover prone, A&M more than LSU, so there's not a huge advantage there for the Aggies.