The Super Bowl is tomorrow night and there are a TON of prop bets out there on the Barstool Sportsbook.

I've studied the Buccaneers for years and have broken down their game film each week since 2015, so I feel like this puts me in a unique position to give my insight on the prop bets available for tomorrow's game. I've gone through them all thoroughly and here are my favorites ranked #10 - #1 (with #1 being my favorite).

The Bucs typically look to Evans early in the game so I like his 1st half line more than his full game line of 59.5.

9) Player to Have Most Receiving Yards: Chris Godwin: +500

Gronk had the most yards of any Buccaneer in their Week 12 matchup, but Godwin was a close second finishing with 8 catches on 9 targets for 97 yards. Assuming the Bucs can keep Tyreek Hill from another record breaking day, this is a very good value for a guy that has as good a shot as any to lead the game in receiving yards.

Speaking of Godwin, he had 7 TDs for the year but he is really good with yards after the catch. The Bucs will look to get him the ball on short smoke screens and pop passes to see if he can make something happen and around the goalline is no exception. I like him to have a big game and score.

Gronk doesn't have a ton of catches this post-season and he has 0 TDs, but it's not for a lack of trying. Tom Brady looks to Gronk a lot in the red zone and while he's yet to haul in one that would count, he's due. Plus big gime players step up in big time games and I can't get that Super Bowl LIII game out of my head with Gronk torching the Rams defense for several big plays down the stretch.

BONUS: Both Players to Score At Least One Touchdown (Including Overtime): Chris Godwin and Rob Gronkowski: +800

The Chiefs Offensive Line is very banged up with their stud RT Mitchell Schwartz on IR and former #1 overall pick LT Eric Fisher out with an achillies injury. The interior of their Offensive Line features two guys who have been cut from multiple teams and a 7th round pick from two years ago. The Bucs can also get pressure with four as we saw vs. Green Bay.

I expect Playoff Lenny to out-touch Jones as he is a more reliable receiver and pass blocker. But Jones is the more explosive of the two backs. In their last matchup, he had 66 yards on just nine carries with a long of 34 yards. I expect the Bucs to give right around double digit carries to both backs, in which case I see Jones surpassing 37.5 rushing yards fairly easily.

4) Total Receiving Yards By The Player (Including Overtime): Rob Gronkowski OVER 29.5: -121

Gronk is just such a big time player, I would be surprised if he had under 30 yards in this game. Cam Brate who typically is the receiving TE also tweaked his back on Wednesday. I think he'll be fine, but just another vote of confidence for Gronk catching another pass. He's still got some juice.

Devin White is the emotional leader of the defense. And in his last game vs. the Chiefs he had 12 tackles. But in the playoffs he's been outstanding and averaging 13 tackles in the last two he's played in (*he missed the Wild Card game with COVID). I expect him to be flying around all game, so I love the OVER here.

The Chiefs RBs are not home run hitters, especially going against a Buccaneers defense that ranked #1 against the run for two straight seasons and has their cog in the middle Vita Vea back from injury. Jones had the longest rush in the first matchup by 2x (RoJo's 34 yard run vs. Mahomes 17 yard run), so this is great value.

1) To Record 300 Yards Or More Passing Yards And Player's Team To Win (Including Overtime): Tom Brady +325

I think this just represents tremendous value. If you think the Bucs will win ML, why not also go with Tom Brady throwing for more than 300 yards? The +325 is just too good to pass up on this prop.

Now if you liked those, how about my Prop Parlay that's now available in the Bet With Barstool section of the Barstool Sportsbook App (Eligible in PA & MI only. Please bet responsibly): 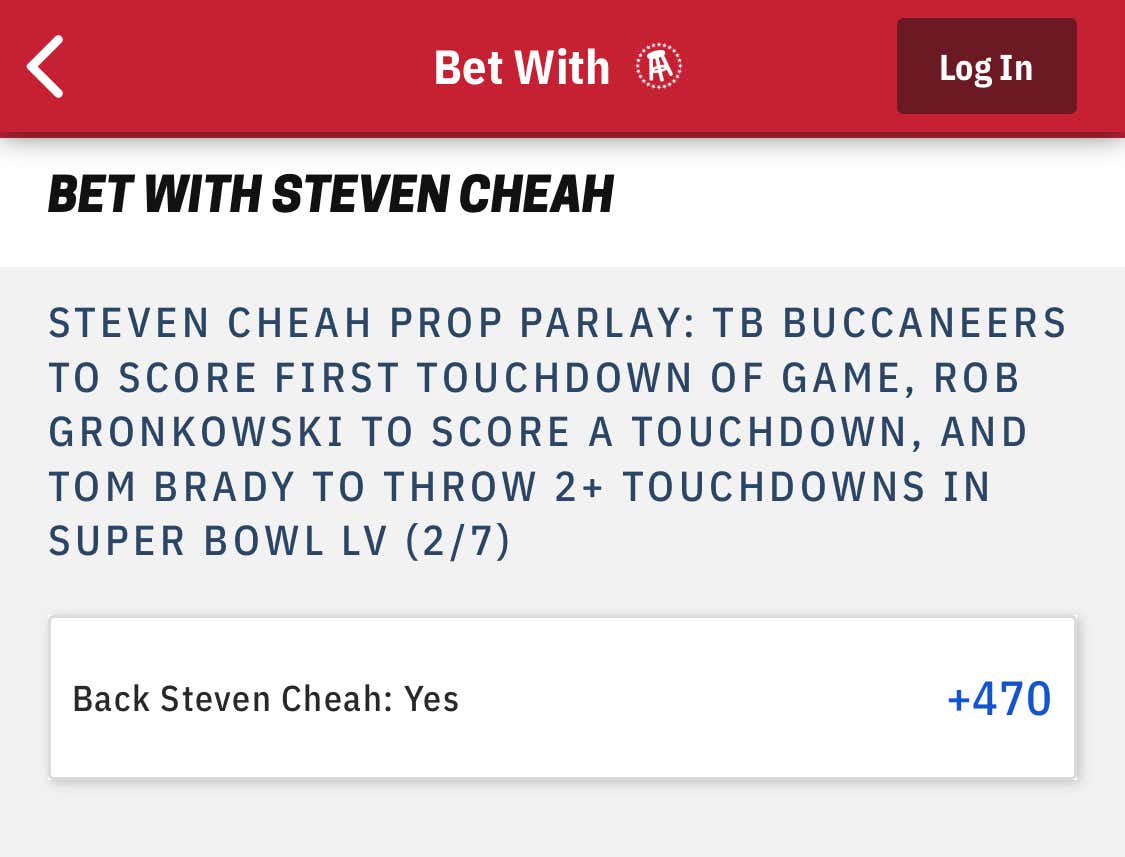 Now we're going to assume a Buccaneers win here and if it's an offensive game, like most expect it to be, it's almost impossible to say Tom Brady won't win SB MVP. But, here are a few great value plays to keep an eye on. Bet very responsibly on these.

I mean, did you watch the NFC Divisional Round against the Saints? This guy is an absolute game-changer

With two backup Offensive Tackles, I could see this happening a lot:

SMB has an INT in all three playoff games this year for the Bucs. Could he complete the cycle tomorrow?

The last time the Buccaneers won the Super Bowl, an unheralded Safety (Dexter Jackson) won the MVP with two interceptions of Rich Gannon. Now Mike Edwards isn't even a regular starter, but his ball skills are so good that Bruce Arians usually finds a way to get him on the field in passing situations. Definitely a reach, but the value is great. Bet responsibly.

J-P-P M-V-P: This would be the perfect ending to this magical season. Get it at the Barstool Sportsbook in the Bet With Barstool section: +10000 (boosted from +7000!)