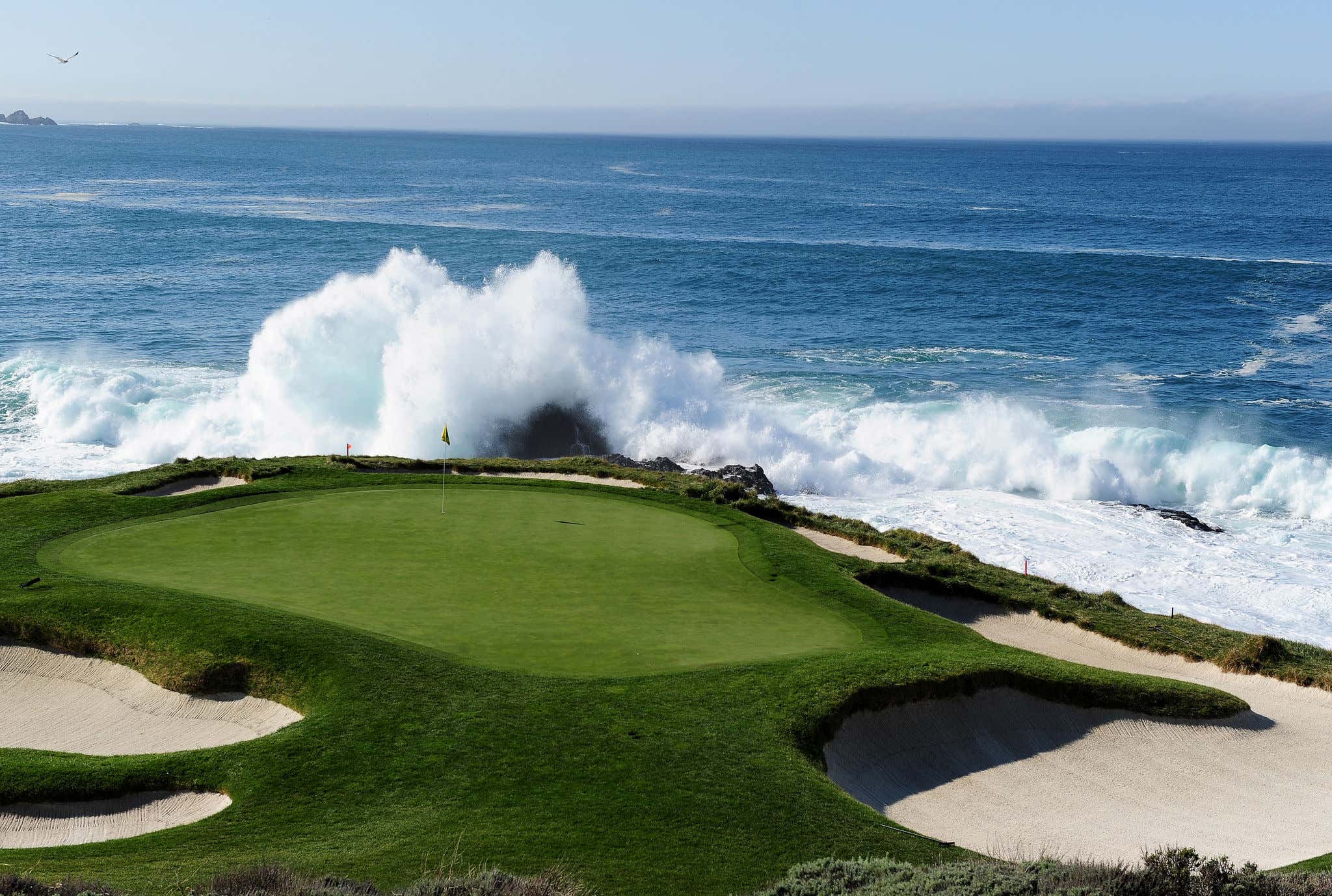 After a fantastic tournament down in warm Arizona we head up to one of golf's most iconic venues - Pebble Beach Golf Links. As everyone knows this event is traditionally a pro-am tournament. 156 pros pair up with 156 amateurs - some celebrities, some corporate big wigs - for 54 holes on a 3-course rotation. Each pro-am pairing would get an 18 hole round on each of Pebble Beach, Spyglass Hill, and Monterrey Peninsula before a 54-hole cut and a final Sunday round at Pebble Beach.

Well…. this year that is not happening. The ams are staying home because of some thing called COVID-19. Much like the American Express at PGA West, this will be pros only on 2 courses instead of three and Monterrey Peninsula is OUT. This is good news and bad news. Obviously we miss out on the likes of Bill Murray and Larry Fitzgerald and a bevy of country stars, which can be good fun. On the other hand,  the rounds don't take 6+ hours and we don't have to sit through one of the more miserable Saturdays on the PGA Tour. Every year we get the same celebrity interviews and slo-mo replay analyses of their swings on 17 and very little of the actual golf at one of America's greatest golf courses. It'd be like only getting to watch a couple of games a year at Wrigley Field and oh yeah, half of it is the Taco Bell Celebrity Softball game. I appreciate the pro-am for what it is and the history behind the Clam Bake, but it'll be nice for once to get more of Pebble Beach and less of all of… that.

Anyways, Nick Taylor is your defending champion after an opening round 63 at Monterrey Peninsula carried him to a 4 shot win. If you haven't heard of him you're not alone. It was the 2nd PGA Tour win for the Canadian (after winning the 2014 Sanderson Farms for his maiden) and he only has one other top 5 in his career.

This tournament has a habit of being won by longshots. Perhaps it's the boost from playing the easier Monterrey Peninsula and Spyglass Hill courses and maybe it's the shorter nature of Pebble Beach. Likely a combination of the two. But some of these recent names aren't going to wow anybody. You get your Spieths, your DJ's (twice), and your Mickelsons (5 times!), but more recently there's been some surprising winners. 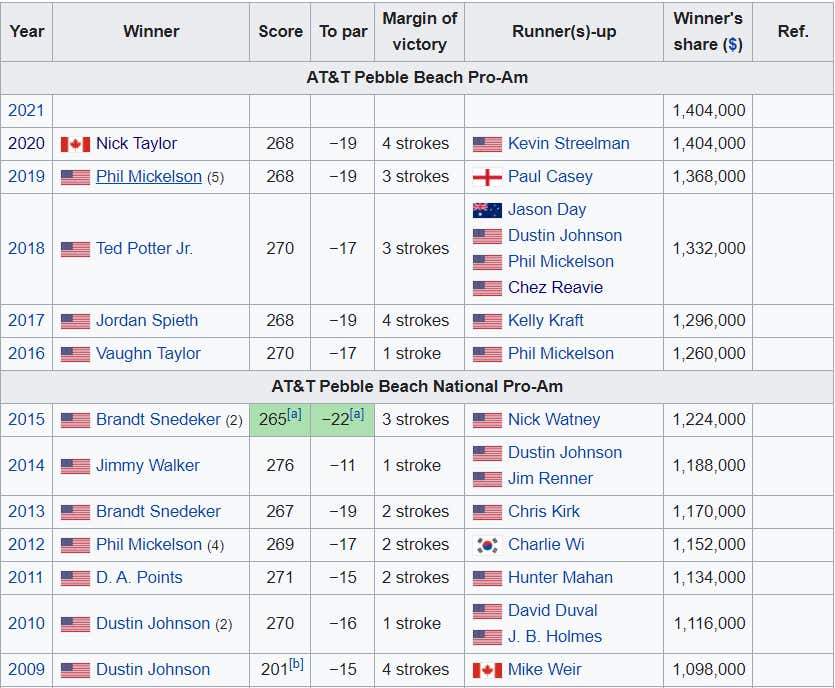 Pebble Beach and Spyglass Hill are each par 72's in the neighborhoods of 7,000 yards, which is just about as short as it gets for Par 72's on the PGA Tour. Due to the tournament layout returning to a traditional 36-hole cut and there being no weekend golf played at SH, I'll leave the descriptions to the far more notable Pebble Beach.

Pebble Beach is iconic for a reason. It was designed by Jack Neville and Douglas Grant and opened in 1919. Throughout it's history numerous famous names have been consulted on design tweaks such as Alister Mackenzie, Jack Nicklaus, and Arnold Palmer, but the goal from the jump was to create as many holes along the Monterey coastline as possible. They sure as hell accomplished that with picturesque views of Carmel Bay directly along 8 of the holes and easy sightlines out to the water on nearly the entire course.

In terms of play, this is a 2nd shot golf course, maybe more so than any course on Tour. If you're digging into meaningful statistics, Strokes Gained: Approach is where to look. Biggest reason for this is that the average green size at Pebble Beach is merely 3,500 square feet, which is nearly half the size of the Tour average. The greens are tiny. Players will miss plenty of greens, so Strokes Gained:Around the Green is a point of emphasis. There are 118 bunkers on the course too, so give sand save percentage a look too. All four Par 5's are reachable (the uphill 14th being the longest) provided you put your tee shot in the right place and you're not hitting into the wind. More on that later. Both courses feature poa annua greens which can provide for some bumpy putts late in the day. Best remedy there, as always, is to hit em tight. 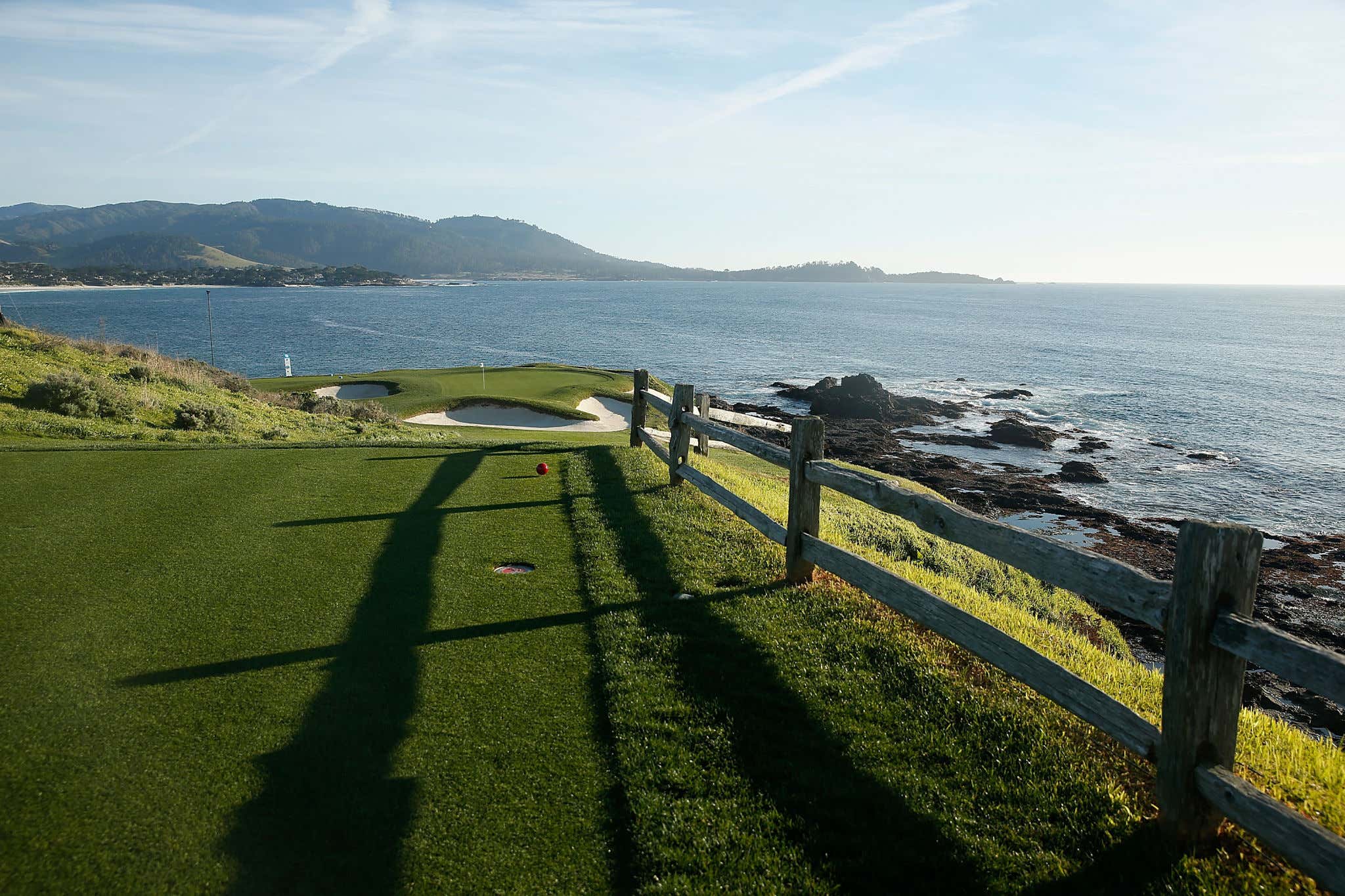 So many of these holes would take this honor easily at other courses. The 6th, 7th, and 8th is up there with the greatest 3 hole stretches in all of golf. It just might be the best. The 17th and 18th provide for some great finishes as well. But I simply must give this award to the par 3 7th. It's the 2nd best par 3 in all of golf. It's also the shortest hole on the entire PGA Tour.

You might think it's as simple as flipping a lob or sand wedge down the hill, but it's also one of the most vulnerable greens on the course to the wind off the water, which is often in the face. It's nearly completely surrounded by bunkers and long is no good here, which can come into play when they put the pin back right. But really it's all about the views. Nothing better. Nothing.

This is pretty typical of the weather here every year in February. Temperatures in the 40's and 50's and a little bit of rain means we're going to be seeing a lot of QZ's, sweaters, and the occasional umbrella out there. Wouldn't be Pebble Beach without a little rain. Hell, even this guy knew to bring his umbrella to knock-off Pebble Beach. 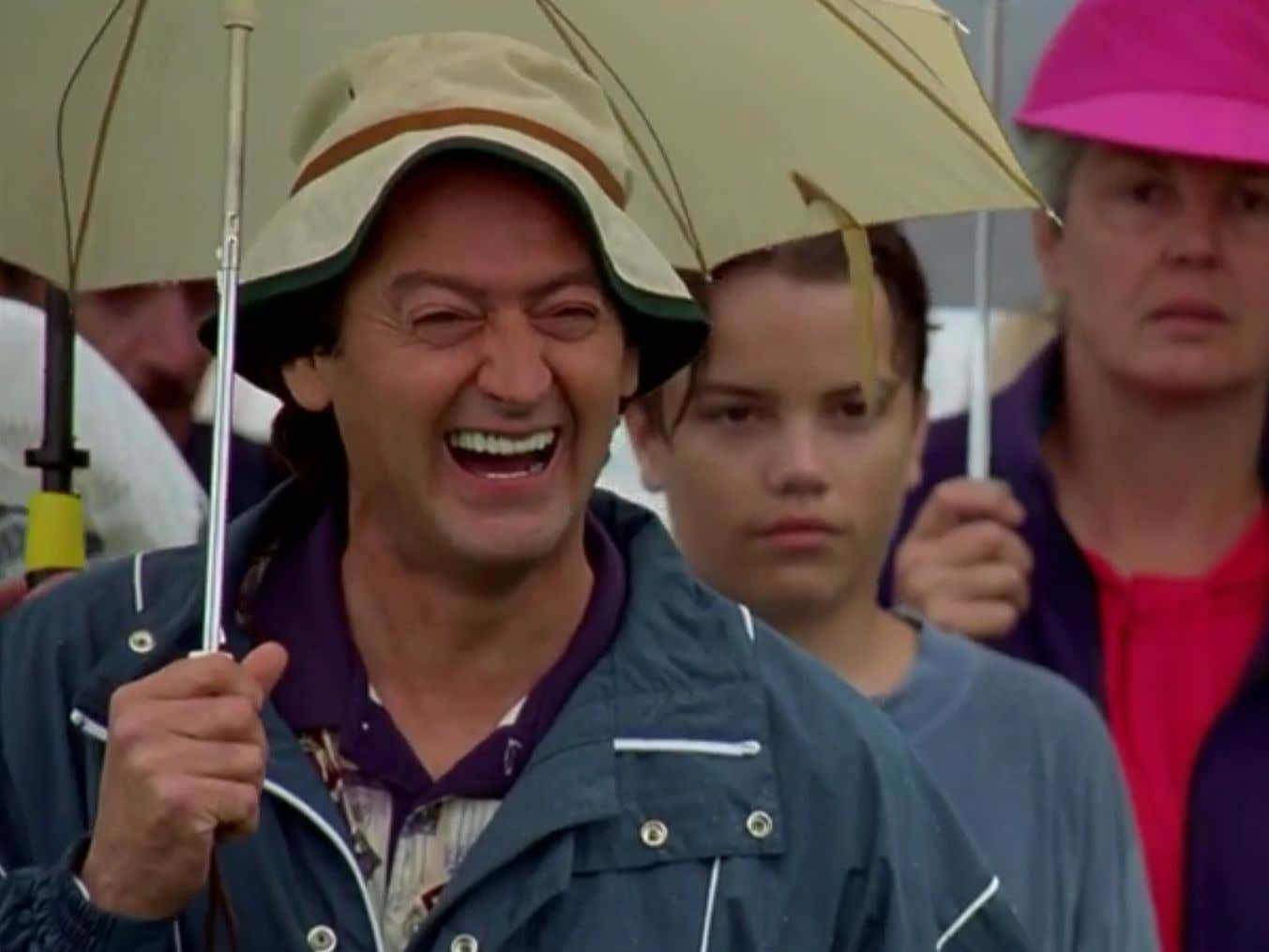 The thing to keep an eye on is the wind picking up as the tournament progresses. Like most coastal tracks, the wind is one of the course's most useful defenses. With how small these greens are, this course could change dramatically as we come down the stretch. Can't wait.

Here are your featured groups starting at 11 AM each day: 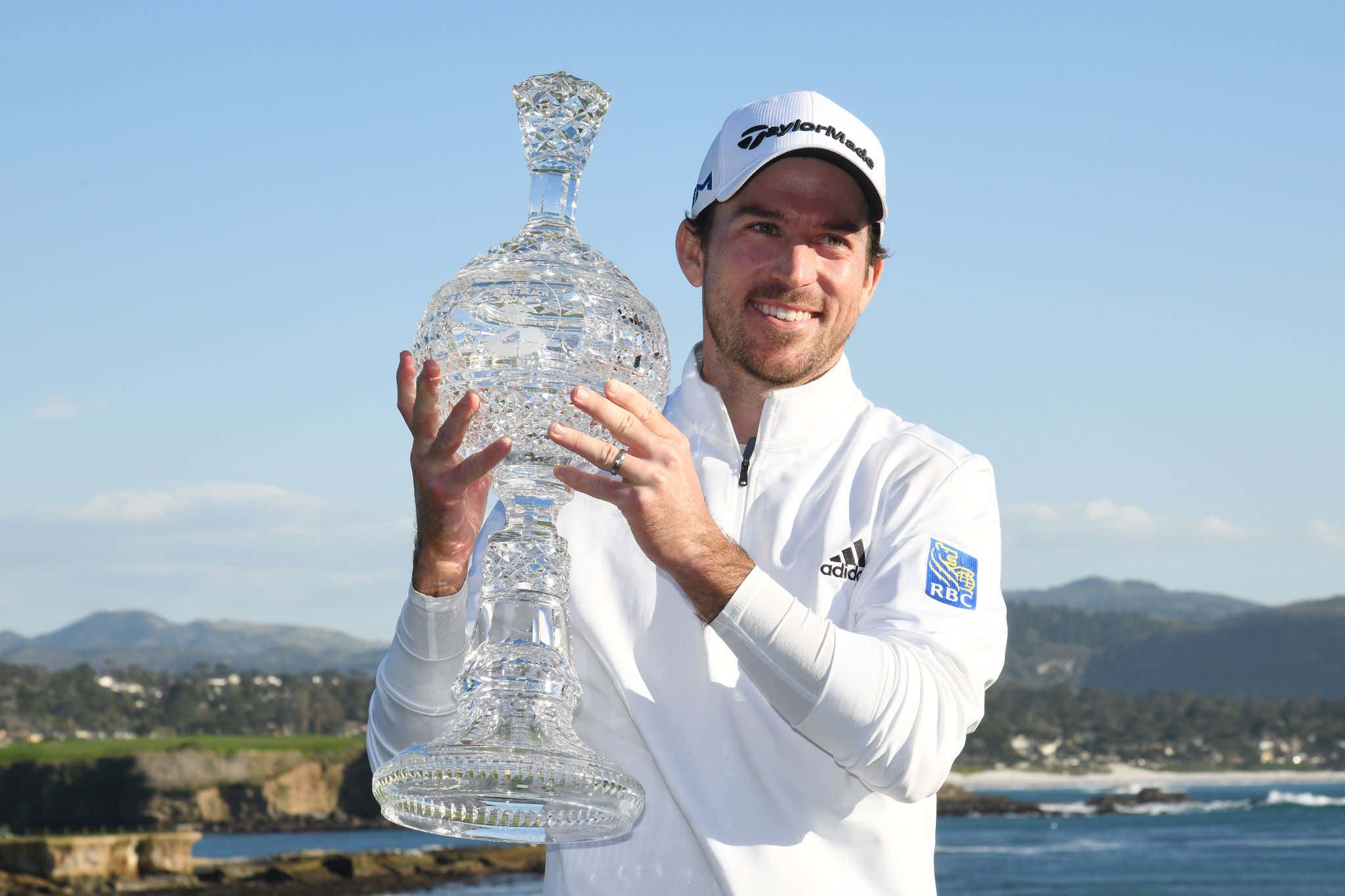 Big time crystal for a very classic tournament. You can't just show up on the scene and flash crystal. It's earned by grinding as a Tour mainstay year after year after year. When you have a name like Bing Crosby attached to your tournament, these are the perks you get. This baby has the potential to own any room you put it in. Strong. 8/10. 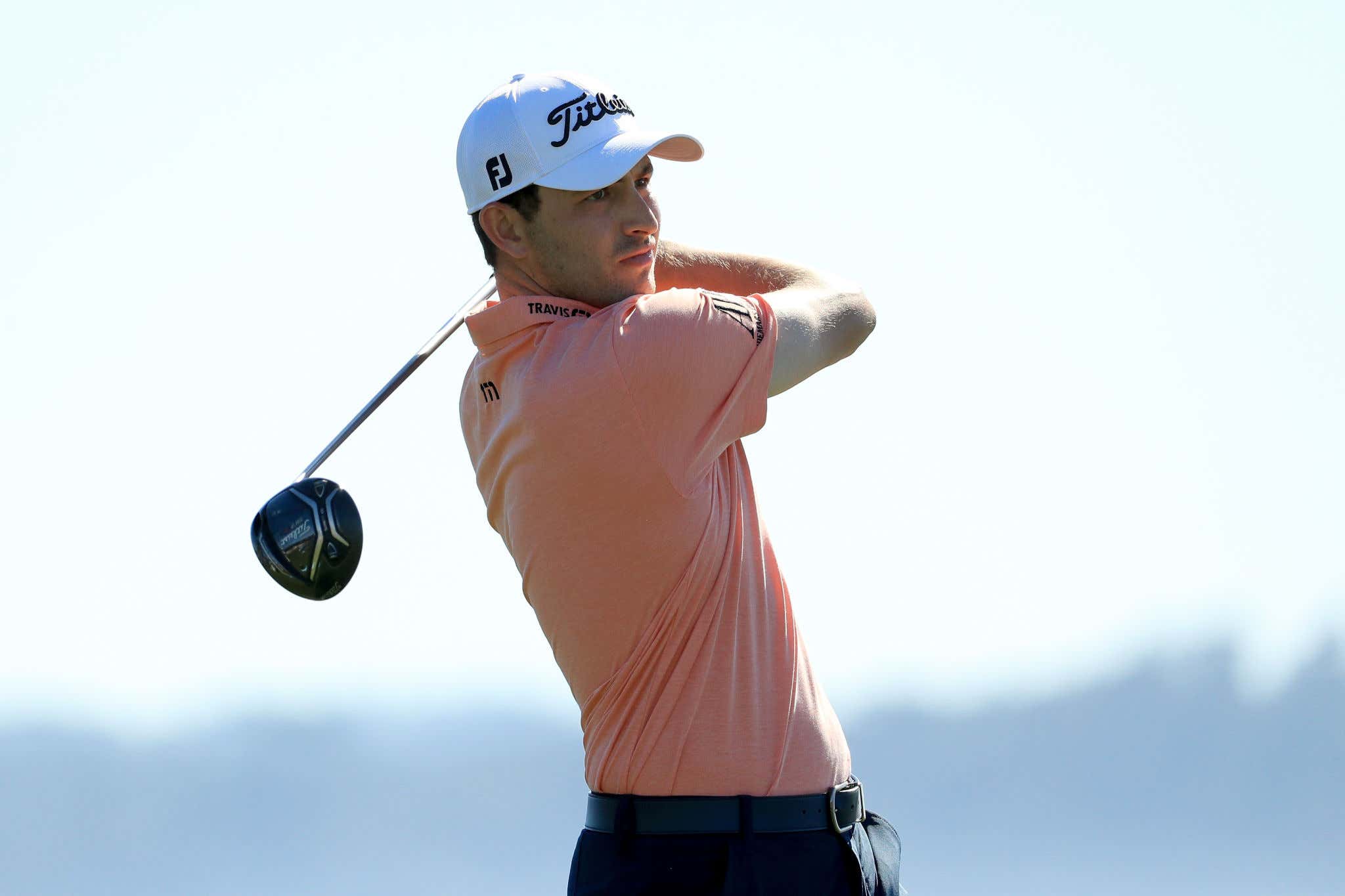 Going into the week, two-time champion Dustin Johnson was handicapped as a heavy favorite at a jaw-dropping +400. I can't remember the last time I saw a player with odds that steep at a full field event. Maybe back when Rory was winning majors? Idk. If I had a statboy to look these things up I'd have him figure it out but I'm a one-man band over here.

We woke up to news on Tuesday that DJ had actually withdrawn. Maybe it's because father-in-law Wayne can't strong-arm him into playing with him in the pro-am, but it probably has a lot more to do with DJ being jetlagged after winning the Saudi International this past weekend. It's an 11 hour time change and he's just coming off a W. It's understandable.

That makes Patrick Cantlay the betting favorite. He doesn't have a ton of success here in his career (1 top 10 in 4 tries, a 9th place finish in 2013), but he's clearly the best player in a surprisingly weak field. Typically when players skip this event it's supposedly because of the long rounds associated with the pro-am, but this year's field in the absence of it doesn't exactly back that up. With that said, there are a ton of quality events in this stretch of the Tour schedule. Even a guy like Sungjae Im who plays damn near every event needs a rest once in a while, and he's among those choosing Pebble Beach as the opportunity to do so. It's a shame but it is what it is.

Another major storyline this week will be the encore performance from Jordan Spieth after his triumphant return (sort of) at Scottsdale. This is a course that fits his skill set well, which is why he's never missed a cut here even at his worst and has the W in 2017. I think most were thinking if Jordan was going to start showing signs of life, it would be here and not a week early in Scottsdale. We'll see if he can keep it rolling.

Rickie Fowler is another guy we're keeping an eye on because he continues to flounder. He missed the cut last week at a tournament he's thrived at and even won just a short 2 years ago. Now he finds himself playing a tournament he hasn't played in 9 years because he simply needs the reps and needs the opportunities to try to find his way into this year's Masters field. Because yup, he's still on the outside looking in and is only digging a deeper hole every week he plummets down the Official World Golf Rankings. He's now at 63rd and needs to find a way inside the top 50 around the end of March.

The last big name storyline guy to watch is Phil MIckelson. This is a tournament he's won 5 times and I mentioned a few weeks ago that I think time is finally catching up to ol Lefty. His win here in 2019 may very well be the last main PGA Tour event we see him win. He might have an outside shot at a handful of venues for a couple more years and this is one of them. The other ones are probably Augusta, Scottsdale, and the courses in the Open Championship rota where history favors the experienced golfer. And he's skipped Scottsdale the past two years to collect the appearance fee in Saudi Arabia so yeah… he's running out of chances to get Tour win #45. We might be getting closer to seeing him on the Champions Tour more regularly than we might think.

Oh one more. John Daly is playing. Giddy up.

As for a pick… I'm gonna roll with Jason Day +1800. I actually grabbed him when the lines opened at +3000. Even before DJ's WD shifted the lines, there was steam on Day pushing it around +2500. There are really two main things you look at when evaluating potential picks - course history and recent form. Jason Day may not have a win here but his course history is still impeccable, even in his recent down years:

The recent form is where there's concern. He's missed his last two cuts but there were some signs of life last week in Arizona. His struggles in recent years (besides injury) have been due to his play tee-to-green. He improved last week, hitting 75% of greens but lost an astonishing -5.238 strokes with his putter. Any golf sharp will tell you putting is one of the most variable statistics from week to week. Anyone who also knows golf the past decade knows that Jason Day is one of the best putters on planet Earth. I'll take a chance on him rebounding with the flatstick and continuing his improvement on a course where he's had great results.

Will Zalatoris Group B +250 (over Si Woo, Molinari, Sam Burns, and Cam Davis) - Molinari the biggest threat here as he's started to find his way again.

Top European Henrik Norlander +600 - Top 25's in his last 3 events against stronger fields including a T-2 at the Farmer's. 32nd on tour in SG: Approach.

Ricky Barnes To Win +50000 - Absolute bomb. Guy's 1st in SG: Approach. Small sample size of 12 rounds at dogshit tournaments 3 months ago and he was disaster off the tee but that's why it's a bomb