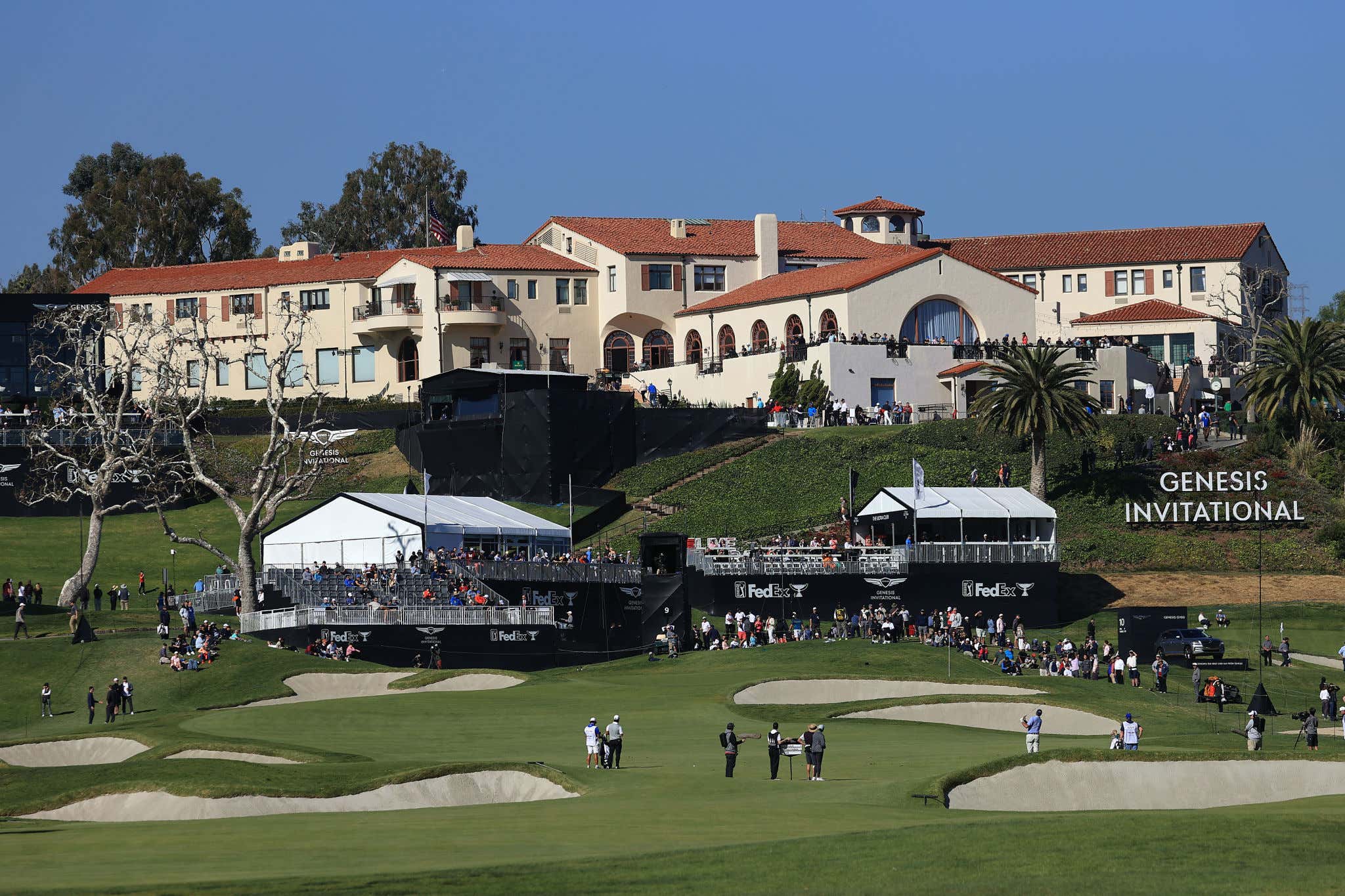 WOO BABY do we have a treat on our hands this week. After one of the weakest Pebble Beach fields in history, the stars are coming out in droves to Los Angeles for the Genesis Invitational. 7 of the top 10, 20 of the top 30, and 30 of the world's top 50 players are teeing it up this week at Riviera Country Club, one of the Tour's better tests.

This is the 94th edition of this tournament, making it one of the longest running on the PGA Tour. Originally (and most traditionally) known as the Los Angeles Open, this tournament has gone through numerous name iterations. It's gone from a variety of names from the LA Open to the Nissan Open to the Northern Trust Open to the Genesis Open to finally starting in 2020… its current name as the Genesis Invitational.

Now what does "invitational" mean and how is it different than other tournaments? Glad you asked. Means a smaller field (120 this week) with more stringent predetermined qualifications and a bigger chunk of change and FedEx Cup points up for the grabs. Most tournaments on Tour have around a $7 Million purse and 500 FedEx cup points. This bad boy has $9.3M and 550 FEC points up for grabs so the stakes are a little higher. Invitational status also means a few more sponsor exemptions from the tournament host. Arnie's got his tournament down in Bay Hill, Jack has the Memorial, and starting in 2020 this became Tiger's tournament. El Gato Grande will not be teeing it up this week as he continues to recover from back surgery, but you'll be sure to see him around the grounds fulfilling his host duties.

Last year's edition was won by Adam Scott. It was his 2nd career W at Riviera, with his first coming alllll the way back in the rain-shortened 2005 version. Scott held the 54-hole co-lead with Rory and Kuchar, but was able to get the job done with a 1-under 70 in challenging conditions. 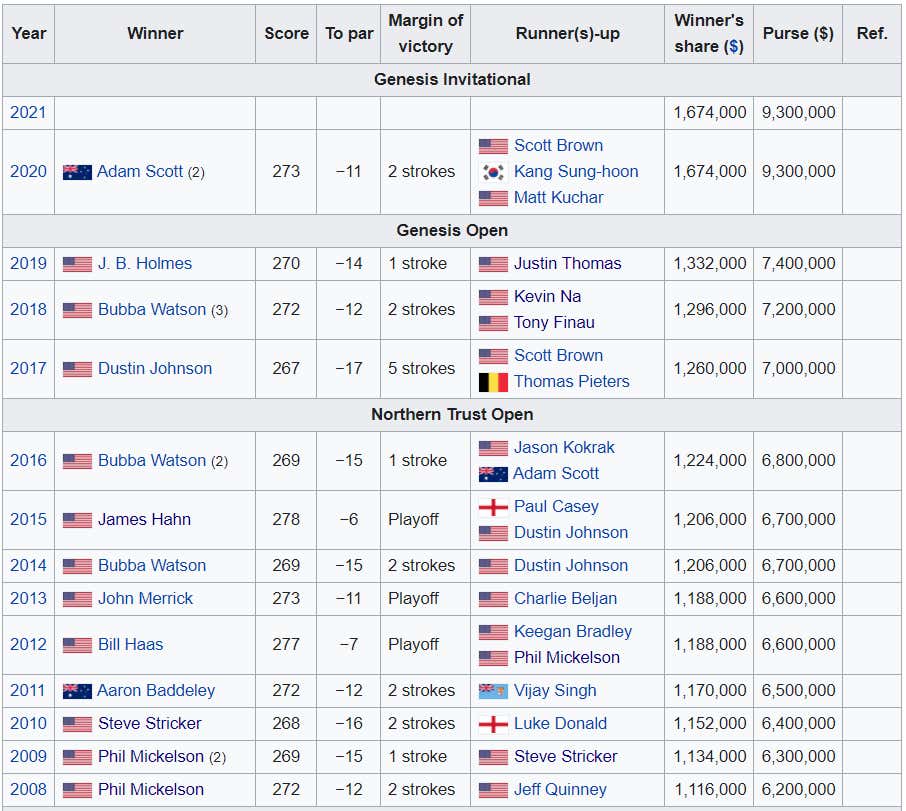 Riviera CC is a par 71 playing at just over 7,300 yards. That may not sound like a terribly long course for a par 71 relative to some other tracks on Tour, but that number is shortened considerably by the 1st and 10th holes. The 1st hole is the easiest par 5 on the entire Tour every single year. There's really no reason at this point for it not to be a par 4 with the way these guys hit it off the tee. The ravine that cuts off the fairway at about 320 yards keeps players from getting everything they can off the tee, but that hasn't stopped them from birdieing it more than half the time. By the way, it's 360 yards downhill to clear that ravine and I'm VERY curious to see if beef boy Bryson gives it a go. He was only in his early stages of his transition at this time last year and laid back.

The rest of the course is challenging. You've got 6 par 4's in the 450-500 range that will bring the mid to long approaches into play, including the difficult iconic 18th hole with the blind tee shot up the hill. Miss left and you've got a nasty sidehill lie in the rough to contend with. Miss right and you've got tree limbs to contend with hanging over the right side of the fairway. With that said, overall length off the tee holds a bit more weight here than accuracy. The fairways are pretty narrow but the rough isn't all that punishing, so you can take your chances with a guy who gets it out there. 2019 Champion JB Holmes is a great example of that. Like Torrey Pines and Pebble the past few weeks, Riviera has poa annua greens, which are notorious for getting bumpier as the day goes on. 3-footers on Sunday can get real testy in a hurry on poa annua. Just ask Nate Lashley.

This course is notorious for having a ton of leaderboard overlap with some place called Augusta National. Adam Scott's win last year is a prime example of that. Riviera and Augusta both favor guys who can work the ball right to left, which is why drawers of the golf ball like Scott and lefties who cut it play well there. In fact, there are 3 lefties who have ever won The Masters - Mike Weir, Phil Mickelson, and Bubba Watson. All 3 of those guys have won MULTIPLE TIMES at this tournament. Pretty tough to ignore that type of pattern. 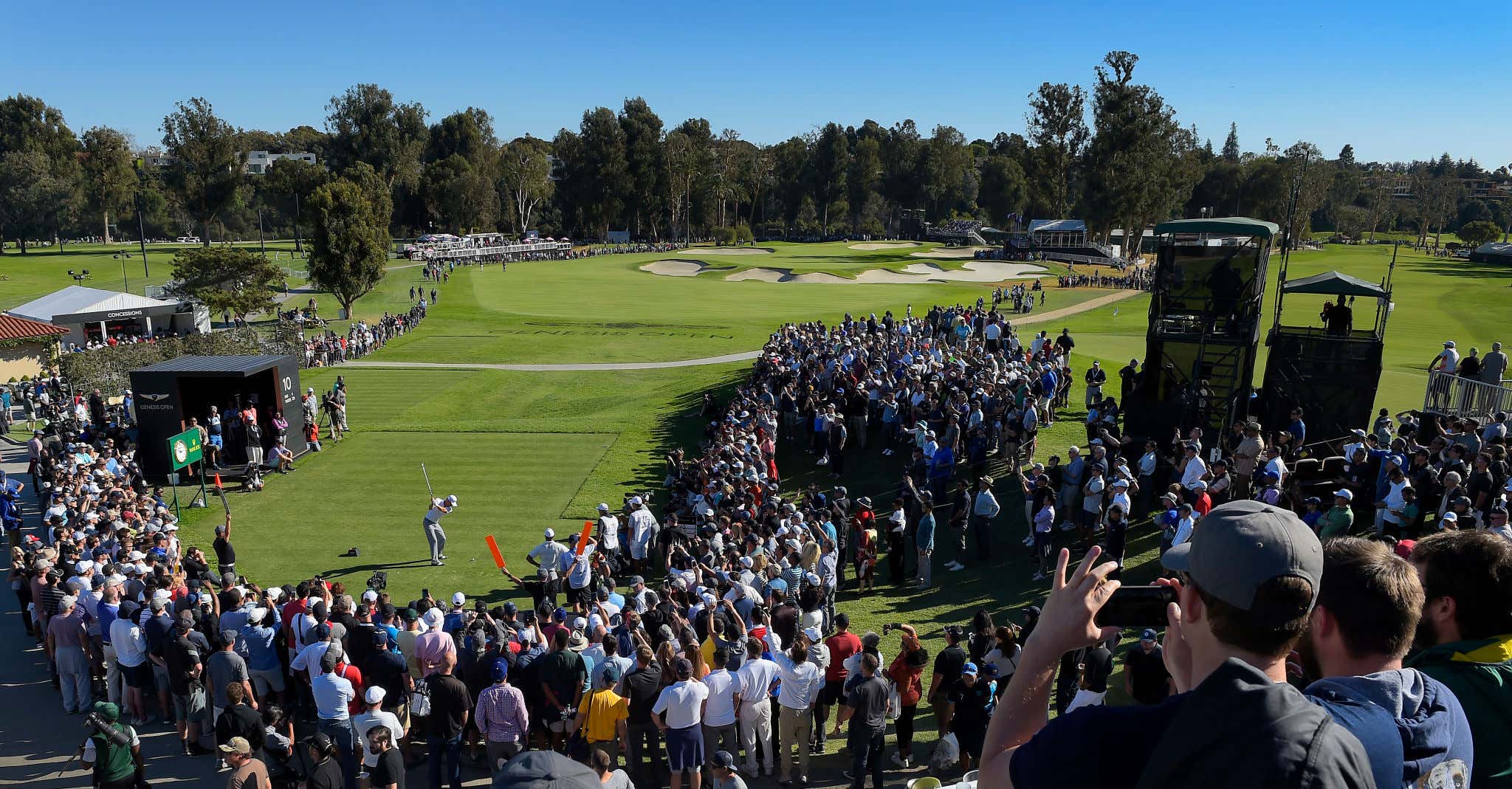 Ooooooweeeeeeee this is one of my favorite holes on Tour. It's one of the great risk-reward holes in all of golf and a source of great debate every year at this tournament. So much so that my associates Riggs and Trysta Krick had a back and forth on Barstool SPORTS dot com about it last year. The evidence appears pretty damning that the decision for these Pros to go for the green off the tee is the right one to the tune of 3/10 of a shot, as per Rory McIlroy. But by no means does going for it and missing narrowly take a big number out of play. This green is so preposterously tight (especially back right) and slopes towards the bunkers both front and back of this green. If you blast your tee shot and find yourself on the downslope at the back of one of these bunkers, there's no virtually no shot of you keeping it on the green. Poor Scott Piercy will be our volunteer for the class.

Missing long and left can also set up a bad angle where your margin of error on a flop shot is razor thin too. You're going to see a lot of guys try to fade 3 woods and long irons to the front left edge depending on where the pin is. The further back right that pin is, the more cautious they'll be. Regardless, it's going to be a lot of fun for all of us to watch.

Here are your featured groups starting at 9:45 AM each day: 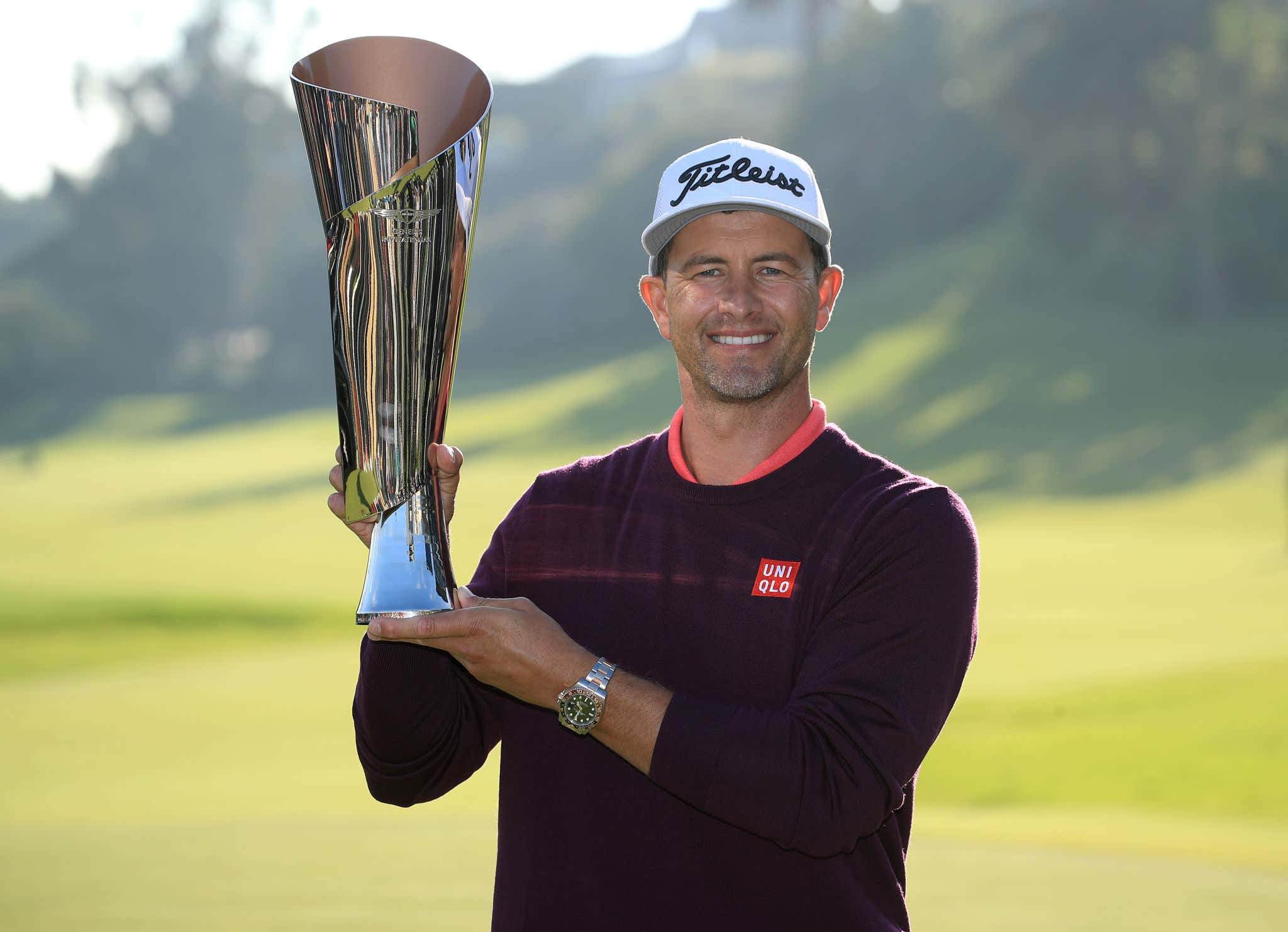 This is a little too modern for my taste. It's got that College Football Playoff meets F1 racing trophy vibe. I suppose that's the idea given that the tournament is sponsored by a foreign luxury car brand, but I like my trophies to look a lot less corporate. It's sleek, it's got shine, but it also looks like you could be eating two scoops of Rocky Road out of it. It's the epitome of a 4/10.

Give me the 2005 edition of Adam Scott and his trophy all day. 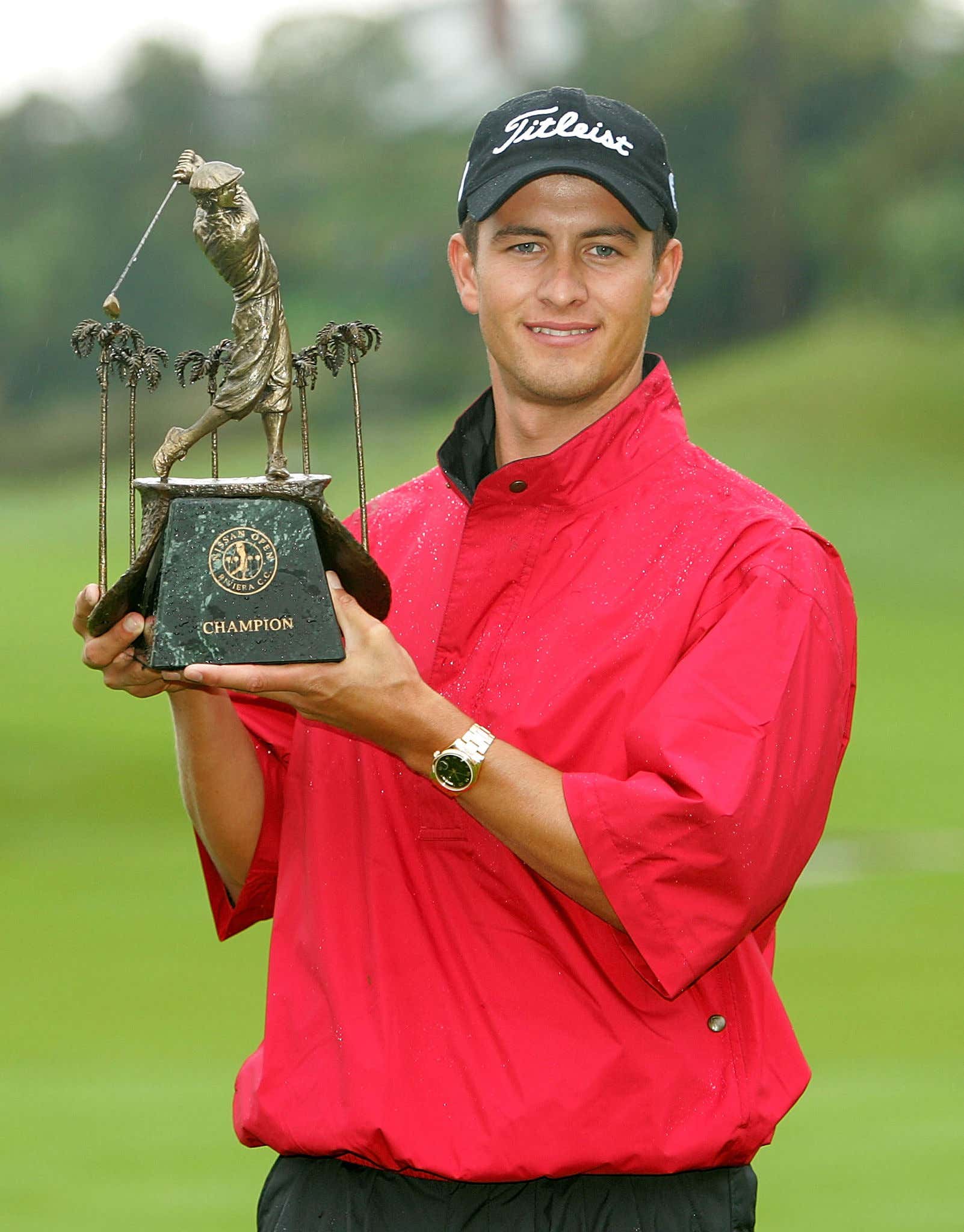 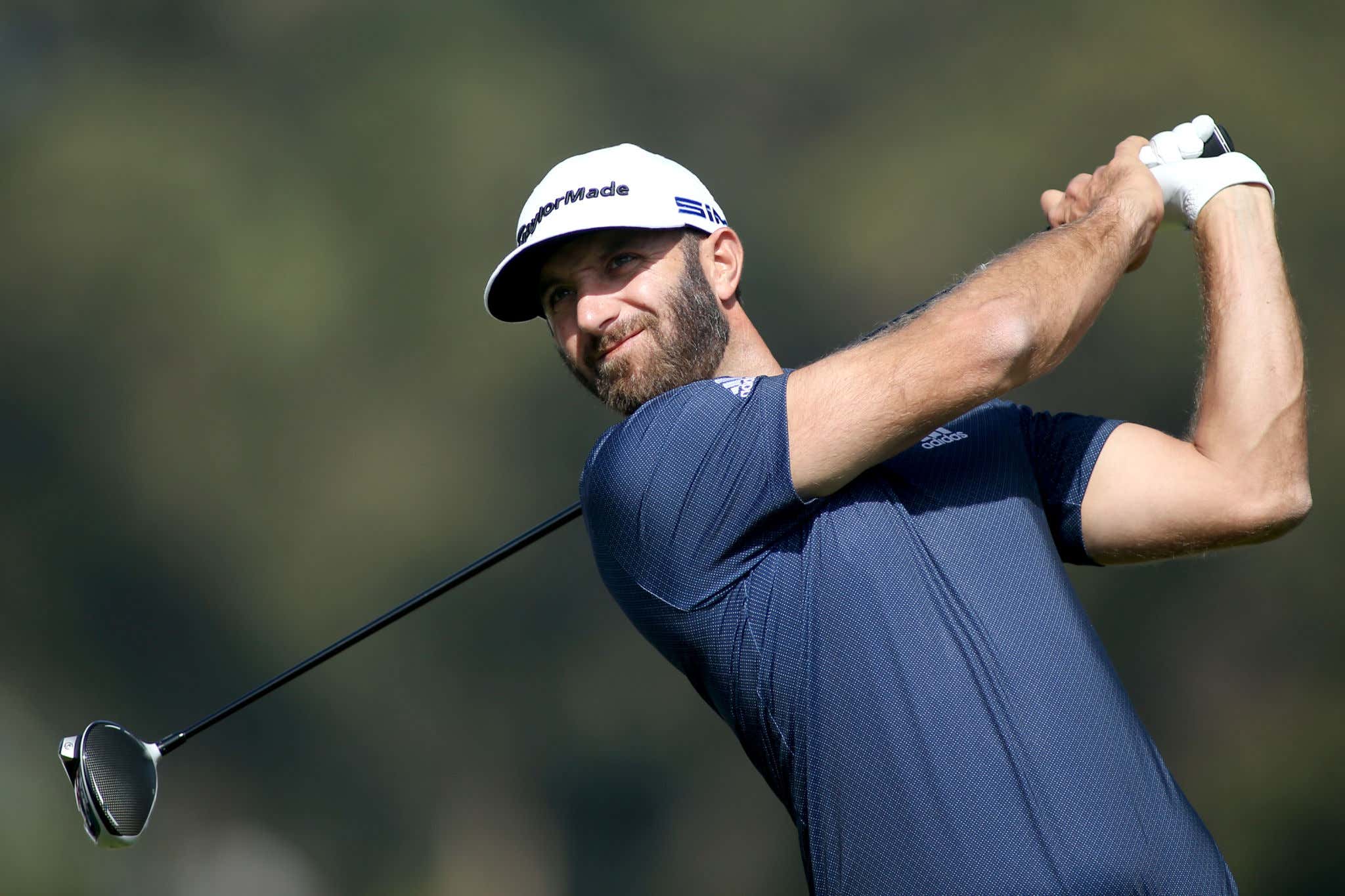 I mean where do I start? This field is stacked. The heavy favorite is the 2017 champion, Dustin Johnson. He's +500 at the Barstool Sportsbook. That's a pretty steep price and deservedly so. I'm not sure people appreciate just how far ahead he is of everyone in the Official World Golf Ranking. His gap in average OWGR points (which is what the rankings are based on) between him and #2 Jon Rahm is bigger than the gap between Rahm and Brooks Koepka at #12. He's got a W here at Riviera and has shot -48 here the last 5 years, which is 8 shots better than anyone else. He's also got the recent W at Augusta, and has finished in the top 3 in 7 of his last 10 starts worldwide. That's just preposterous. So please, don't fault me for taking the chalk here at +500 and taking him Top 5 +120 as well.

I'm also going to take my chances with Rory McIlroy +1200. He had the 54 hole co-lead here last year and made an atrocious triple on the 5th that took him out of it on Sunday. He finished T-4 in 2019 as well. On paper this course is a fit for his game. He hits it long and loves the draw. It's sort of bizarre that he continues to pile up impressive rounds here and at Augusta, but can't seem to be able to string 4 good rounds together. I'm banking on him breaking that trend this week and I'll back that up with a Top 10 +138 bet as well

Bryson DeChambeau +1600 - I just feel that given the US Open win and some of his other accomplishments last season that he's earned a better price than this. Think there's some value at 16/1 and he's played better every year he's been here (T-5 last year).

Bubba Watson To Win +4500 - There's 3 places where you always gotta sprinkle Bubba - Augusta, TPC River Highlands, and Riviera. 7 of his 12 PGA Tour wins have come at these 3 courses.

Maverick McNealy To Win +12500 - Flew a bit under the radar how well he performed at Pebble. He was an iffy penalty and a Berger bomb away from being in a playoff.

Justin Thomas Top 10 +138 - Identical odds to Rory and I was extremely close to picking him for a lot of the same reasons. I don't know if we talk enough about the similarities in these guys' games. Rory has a little more gas off the tee and JT is a little more crafty around the greens. The rest is pretty damn similar. High, sweet draws baby.

Tony Finau +2000 to win - (WARNING: This is merely a FOMO pick. Been chasing that Tony win for like 4 fucking years and there's just no way I'm going to miss the boat. This pick will be a mainstay here for the foreseeable future, ride or don't.)