Much like an Irish wedding (mine included), there are fights breaking out all over the joint today.

There was a heavyweight bout late-last-night/early-this-morning in Auckland, New Zealand that was chock-filled with two native New Zealand big men hugging each other for the majority of 12 rounds before Joseph Parker (now 28-2 with 21 KOs) scored a unanimous decision over Junior Fa (19-1 with 10 KOs).

Parker then had back-to-back defenses against nobodies (including Tyson Fury's cousin, Hughie Fury), and then lost two decisions in a row to Joshua and Dillian Whyte.  Parker has rattled off 4 wins since the Whyte loss, including this morning's snooze-fest versus an untested Fa, so perhaps Joseph Parker gets back in the mix in the heavyweight division.

Outside of New Zealand, there are fight cards scheduled today in London, Kazakhstan, Los Angeles, and then Miami… And that Miami card features the guy many think is the best pound-for-pound fighter in the world.

After he rudely stood me up for an interview 71 days ago, I wrote a scathing blog about Saul Alvarez that, luckily, no one in Canelo's camp read.  As a result, I was invited to sit down via ZOOM with the champ earlier this week to talk about his fight tonight against a guy you have never heard of name Avni Yildirim (21-2, 12 KOs)… And, I am reversing courses here, Canelo was lovely to chat with.

So where's the interview?

I have no fucking idea.

Due to some technical issues on Canelo's end, my talk with him is somewhere in the cloud, and the backup footage that his team had from a shotgun mic on a poorly-positioned nearby camera was too scratchy to cut and paste over the pristine recording on my end.

I posted just a small clip of that scratchy recording on my Instagram page, and now I wait for someone to inevitably accuse me of recording it with a potato.

But the point remains, outside of an unforeseen technical glitch, Canelo was lovely to talk to.

He even entertained my wild prediction that he will finally get revenge on Floyd Mayweather sometime in 2037 in a Tyson-esque money grab between two bored and retired fighters.

Canelo is (potentially) that old guy on the left.

Interviews through interpreters are always less-than-ideal, ESPECIALLY when the fighter has 10 interviews lined up back-to-back, but Alvarez was dialed-in on every word I said, and he alluded to our next interview being possible without an interpreter at all… This re-kindled love affair with the champ is a long way from closing my last blog with "Fuck you, Saul, and take a report." … A blog that was trying to make a case for an upset by a lanky Brit named Callum Smith who wound up being DOMINATED by Canelo.

For those who forgot about that recent one-sided event, there was a moment in the 12th where Alvarez and Smith giggled with just how much Canelo's right hooks fucked up Callum's left arm…

But back to tonight's victim challenger… Whose fault is it that you don't know Avni Yildirim?… Nobody's really.  He's a big deal back in Turkey, and also the mandatory WBA super-middleweight challenger… So he is simply someone Alvarez must get past before his unification match vs WBO champion Billy Joe Saunders in May.

Saunders is an undefeated Southpaw Brit that will not be the favorite (Who would be a favorite over Alvarez right now?) but should provide Canelo with his toughest test above 160 pounds.

And tonight will be the second time in the last 70 days Alvarez steps into the ring, this time in front of a COVID restricted crowd of 15,000 at the Hard Rock Stadium in Miami.  Canelo is a HEAVY favorite (-4000), so the only bet for some would be to throw a couple of bucks on Yildirim (+1500) and hope the Turk has a little tryptophan in those gloves.

Canelo has seen Yildirim before… Hiring him as a sparring partner before one of his fights vs GGG… So Alvarez is used to the way Avni tends to lean forward when he attacks (which is low-hanging fruit for an accurate puncher like Alvarez).

And professionally Avni has only fought one person even NEAR Canelo's current stature- Chris Eubanks Jr back in 2017… And that 3rd round KO does not bode well for the Turk tonight. 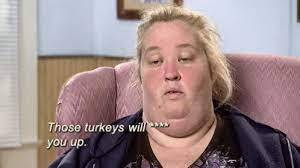 Plus (and since I can't play the interview, you'll have to take my word for it), I flat-out asked Alvarez if he would keep Avni vertical long enough for the Turkish people to stay proud of their fighter and he said (and I am paraphrasing sarcastically from broken Spanish)…

"Tending to the needs of the causal Turkish boxing fan is nowhere on my list of 'Things To Do' this weekend, Large."

(he never said this, but it was implied)

And finally, Alvarez told me he has added a number of different workouts to his camp this time around… Exercises that seem like almost an excuse for me to post cheesecake GIFS.

Such as hot yoga…

Lifting weights near a swinging sledgehammer…

And casual walking on a treadmill to cool down.

BOTTOM LINE- This will not go past the 5th round… HOWEVER, in the unlikely event that Avni scores a miraculous upset, then lock your fucking doors tonight because EVERY SINGLE TURKISH PERSON YOU KNOW will be whooping it up in a Raki-fueled frenzy in the streets of your town celebrating what would be Turkey's greatest professional sports accomplishment of all time.

Coverage for tonight's card starts at 7 PM with the Main Event not scheduled until after 10 PM, and you can watch it on DAZN.

Enjoy the fight and take a report.

I wasn't aware that belly dancing was a Turkish thing, but I am glad I know it now.