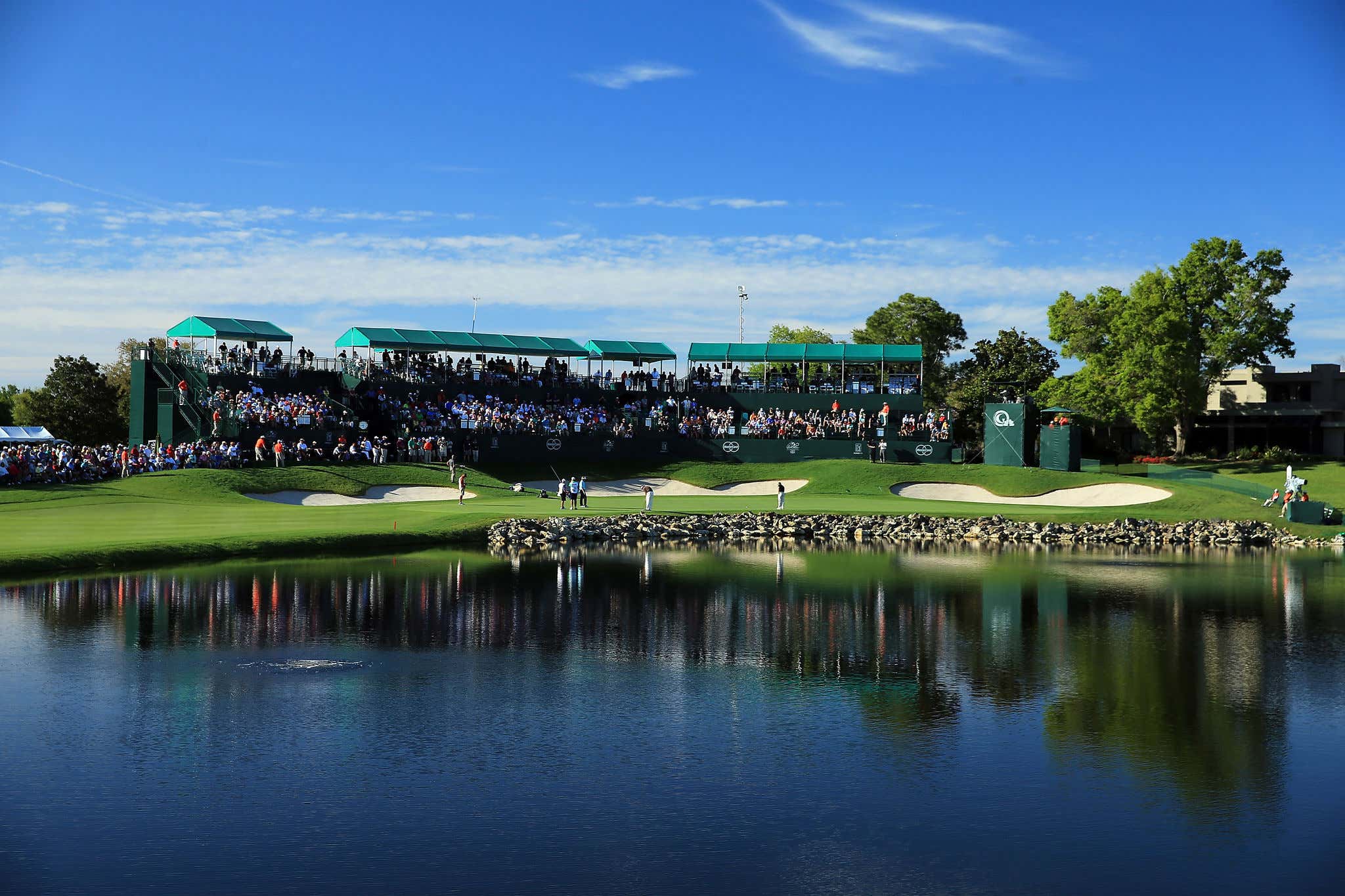 It's time for Arnie's tournament! Welcome to one of the Tour's most iconic stops - Bay Hill Club in Orlando, FL. This was the final tournament completed in 2020 before the COVID break, as Tyrell Hatton won his first career PGA Tour event stateside with a -4 performance in some challenging conditions.

This tournament has a lot of rich history. It holds invitational status, much like the Genesis a couple weeks ago where I detailed what invitational status meant for Tiger's tournament. Speaking of Tiger, this is also a tournament that he's historically dominated at. There are a handful of tracks that were on his annual schedule that he just obliterated fields at. Torrey Pines, Firestone CC, Augusta National, Muirfield Village, and Bay Hill are all courses that Tiger won 5+ times at, with Bay Hill leading the way with 8 wins. Some of his most iconic celebrations came here, including his first win in 2009 after the reconstructive knee surgery to repair the injury he played through at the 2008 US Open:

Now obviously Tiger Woods is not a part of the field this week. But this is still a great field. Historically this is one of the most popular stops on Tour, as it serves as a key tune-up in the lead up to the Masters. To add to that, this tournament has long been played the week after the WGC that was just played, which brings over a lot of the best players from the European Tour. If they're good enough to qualify for a WGC, they're almost certainly qualified for the Masters so those players figure they might as well stick around for the Florida swing in preparation for the Masters. That plays a big part in an interesting trend at this tournament - an international player has won this tournament 5 years running. Here's last year's leaderboard and recent winners. 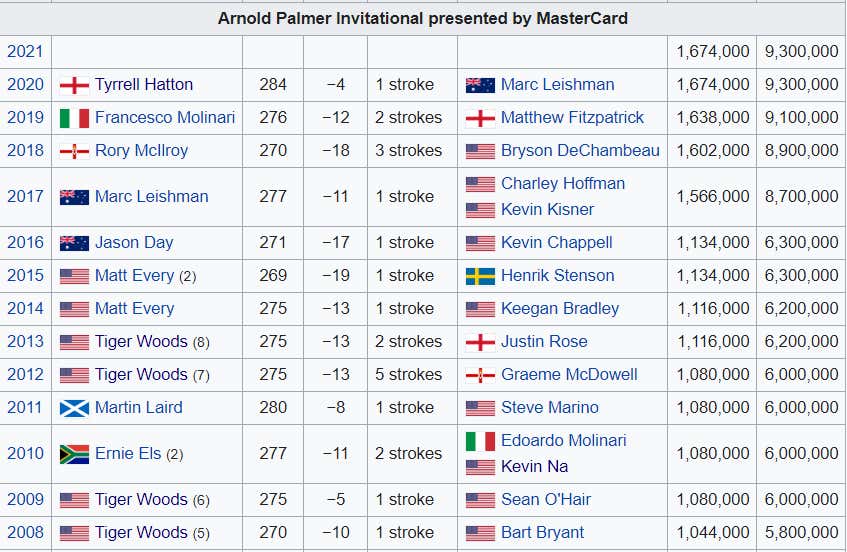 Bay Hill is a par 72 measuring about 7,400 yards. It was designed by Dick Wilson in 1961, who designed a handful of other notorious Florida courses such as PGA National and TPC Blue Monster at Doral. Arnold Palmer purchased the club and lodge in 1974 and his family has owned it ever since, with this tournament starting in 1979.

It's well known for the role the water hazards play, which is surprising when you hear that water is only in play on 9 of its holes. Many of them force the players to make decisions based on both club choice and line, especially the 3rd and 6th.

In terms of what skillset plays best here, there is not a course on Tour with a larger emphasis on Strokes Gained: Off The Tee. I would attribute that more to driving accuracy than distance, mainly due to that aforementioned water. Long iron play is also a premium, with the shortest of the par 3's clocking in at 196 yards and the other three measuring over 215 yards. The greens are bermuda and are typically lightning fast, which tends to favor the more skilled putters on Tour. 18 is one of the great finishing holes with the water right and the pin usually tucked on the right on Sunday.

This is a whale of a hole where something interesting almost always happens. The lake that separates the 3rd and 6th holes is nearly a perfect circle. If the circle were to be a clock, the back tee box is at about 7 o'clock and the green is at 12, roughly a mere 350 yards away on a straight line. This creates a fascinating dilemma in terms of what line the players take off the tee. Obviously the further left your line, the more water and risk you take on. But if you take too conservative a line, you can easily hit through the fairway and leave yourself another risky dilemma based on your angle at the green for your 2nd shot. I can't really think of another hole on tour that is designed so simply while also being completely unique in the way it challenges the players.

The most interesting thing to me is whether Bryson DeChambeau has the stones to try to carry it the 350 yards across to the green. It's damn near impossible to think he could hit anything that would hold the green, but even blasting it into one of those greenside bunkers would create a tremendous advantage. I posed this question last July when Bryson was smashing everything in sight.

Sure enough, BDC stated in an interview back in January on Golf.com:

“If I play this year I will definitely do it,” Bryson told GOLF.com’s Sean Zak during a one-on-one interview last week, sponsored by CDW. “Number six at Bay Hill is one of those I’ve been eyeing. I think I can do some pretty cool things on it.”

I'm wildly curious to see how this will play out in a lot of ways. Not just whether he can accomplish the feat, but also how his group and the groups around him are affected. You know when you have to wait on a Par 5 teebox at your local muni because the jamokes who can't break 100 in the group in front of you are in the fairway waiting for a green they'll never hit to clear? It's hilarious to think that the group behind him might get held up because Bryson is waiting for a par 5 green to clear FROM THE TEE BOX. Maybe the group in front of him will mark their balls on the green and let him swing away first. All of it is just preposterous to think about and I can't wait to watch it unfold because I really think he's got a chance.

Also, think this hasn't been tried before? Think again.

Who else would dare attempt such an audacious feat?

Emilliano Grillo also gave us one of the greatest club tosses the world has ever seen on this hole back in 2017.

Things could get a little dicey there on Saturday and the weekend… early in this blog I alluded to last year's tournament having some challenging conditions. This course can get quite windy and that happened in a big way last year. The conditions were so tough that Hatton won in spite of scoring over par on both Saturday and Sunday. Nobody had done that on Tour in nearly 15 years, and only one round was scored in the 60's (a 69 by Matt Fitzpatrick). That forecasted wind on the weekend is something to monitor as the tournament evolves, and might favor the foreign players who tend to play more links-style courses that encourage low ball flights, much like Hatton.

Arnold Palmer himself founded the Golf Channel, so there's a heavy dose of that and NBC to go around this weekend.

Here are your featured groups starting at 7 AM each day: 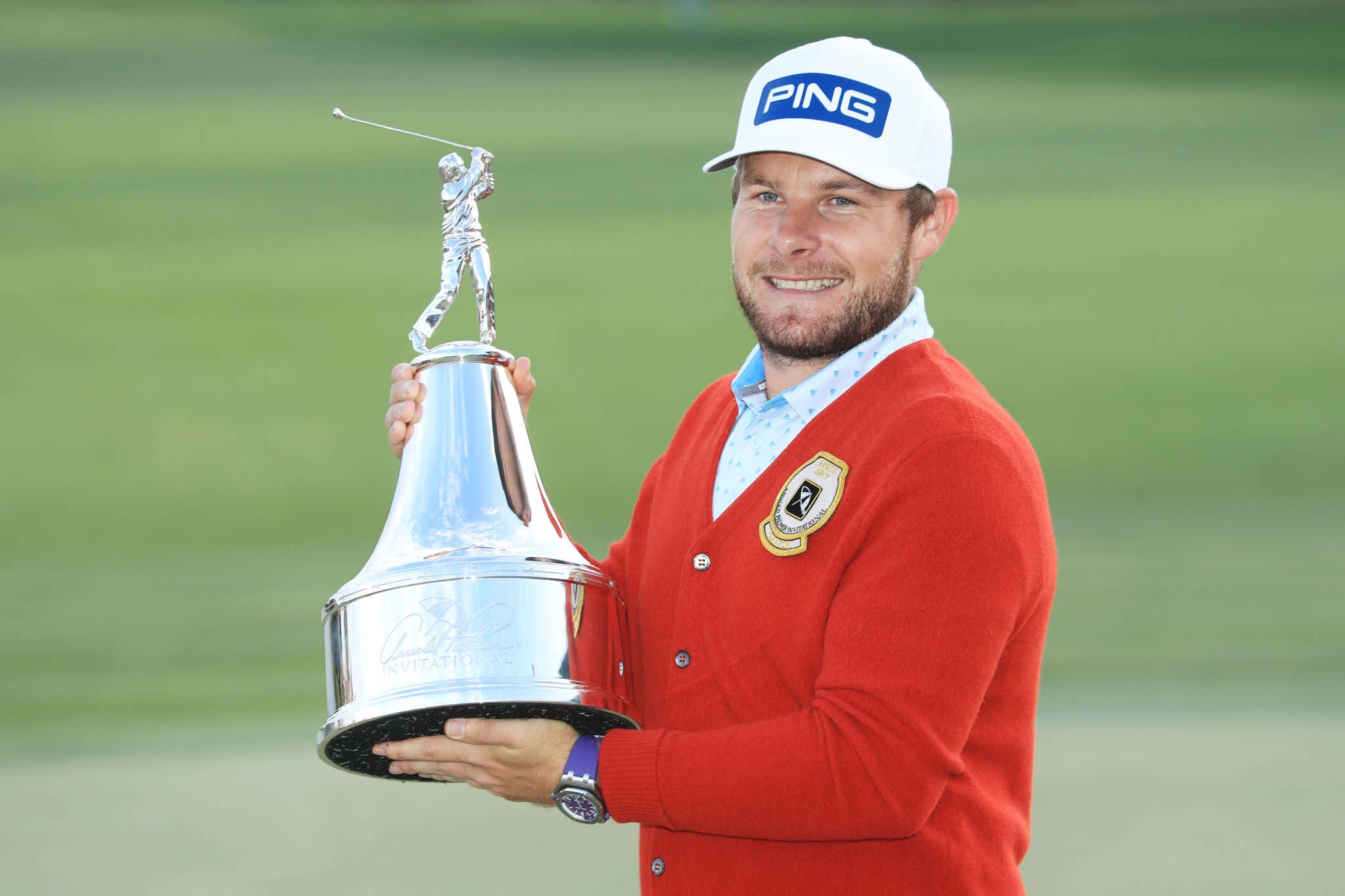 This is some good looking hardware. That's not just some little golfer on top. That's the King with his classic high helicopter follow through. I've always said I love trophies that capture the fabric of a given tournament and this does that in a big way. And speaking of fabric, starting in 2017 after Arnold's passing you also get one of his iconic red cardigan sweaters. I love everything about it. This is another high grade, I'm giving this ensemble an 8.6/10.

Rory McIlroy is currently the favorite at +800. Despite some strong results, Rory is in a bit of a slump having not won since 2019. It was a similar year and a half or so drought that Rory snapped when he won here in 2018. He's finished in 6th and 5th here in the last two years, so there's definitely some course correlation, which makes sense given he's one of the best drivers of the golf ball on Tour.

The field as a whole is a touch weaker than usual for the API. The adjusted schedule essentially placed this event right after a grueling WGC with another one in a couple weeks and the Masters shortly thereafter. The Genesis Invitational is a wildly popular event before the WGC as well, and marquee players simply aren't going to play that many weeks in a row. But this field still has teeth, as 12 of the world's top 25 are teeing it up. As I mentioned before, this field leans heavily international. Only 2 of the top 11 players on the betting board are Americans.

Matt Fitzpatrick is a popular pick coming in at +2200 that I'm going to roll the dice on. He checks a lot of boxes for things you're looking for this week. He's got recent form with a T-5 at the Genesis and a T-11 at the WGC, and won the DP World Tour Championship late in 2020 on the European Tour. He finished 9th here last year and runner-up the year before, so you know he's got some history here. He checks the box as an international player. He's not terribly long off the tee but he's accurate, and gains .241 strokes off the tee per round. He's been a great player for a while now and it's high time he start to win a bit more stateside, just like Hatton did last year.

I'm also gonna go with Francesco Molinari +2800. Y'all thought ol Frankie was dead after Augusta in '19, eh? Not so fast. Dude has rebounded in a big way the last few weeks, grabbing a top 10 in 3 of his last 4 tournaments. He obviously has the history of winning here back in 2019 and has never missed a cut in 7 tries here, placing in the top 10 four times. His game is rounding into form and this would be a major exclamation point saying that he is indeed back.

Justin Rose To Win +6600 - Merely a principle play. Rose is too talented and accomplished a golfer to be at odds this long, even if his performances of late have not been great

Robbie MacIntyre Top 20 +500 - Missed on a pick with him last week but am willing to give it another go. Love Robbie Mac.

Top American Sam Burns +2000 - Genesis was his to lose most of the week, which he did. But has still played great recently. Figured with all the international talk, it'd be fun to get involved with some Top American action.

Hole in One No -167 - This is such a party pooper pick but these par 3's are just too long. Especially if this wind gets going.

I will be on the course this weekend, so if you see me out there gimme a holler. Should be a good one. Enjoy Bay Hill.