Welcome on back. Gotta be honest, today is AWESOME. I have no idea when it all turned, but Tuesday is now can't miss in terms of games. Also love the triple header. We need more great games at 5pm. Give me the happy hour WVU/Baylor game to roll into Michigan/Illinois then let me get depressed watching Kentucky. I'd have it no other way. As a reminder, every night through the NCAA Tournament I'll be live on the Barstool Sports Clubhouse at 11pm for the college hoops nightcap. Pour a drink, come argue and we'll run through all the shit that happened and talk about whatever you want. Let's get into today's games. 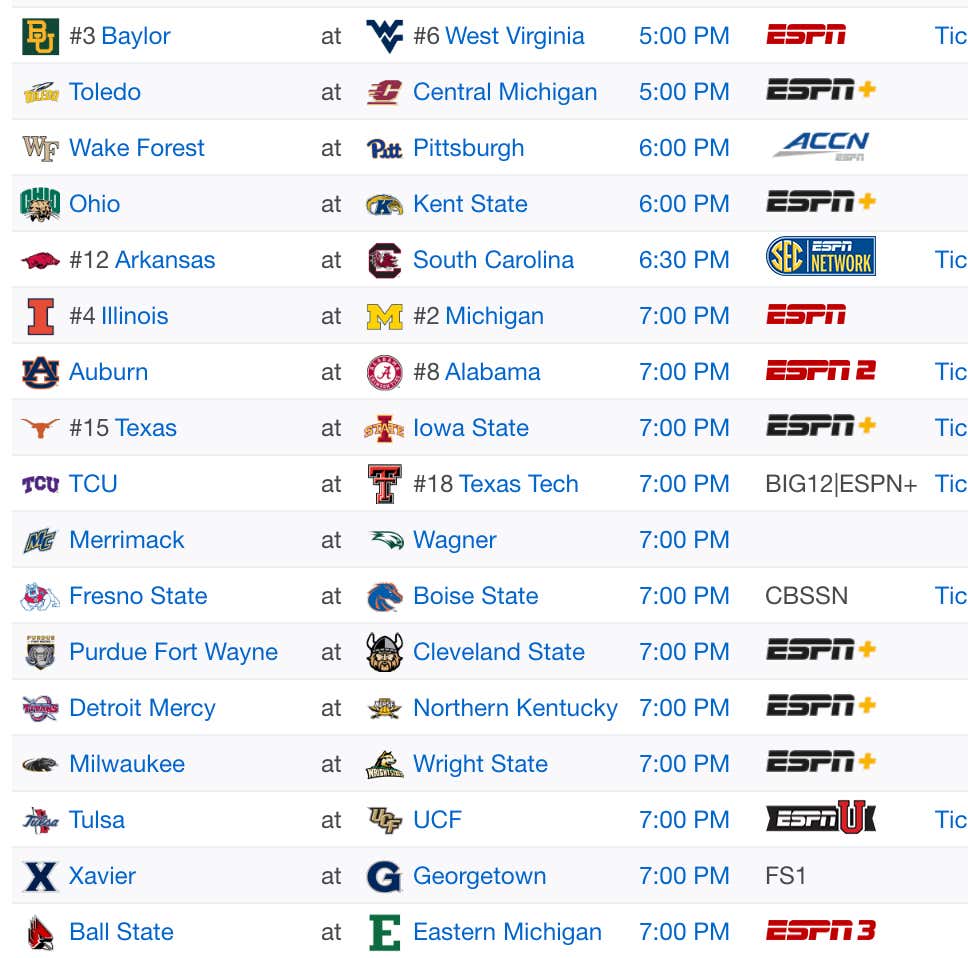 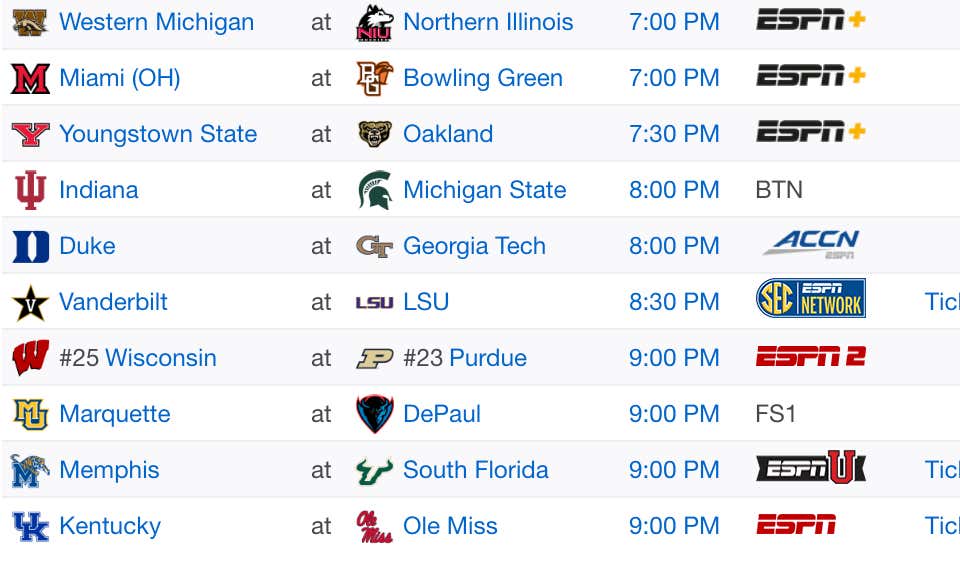 Game is at 7pm at NKU (Horizon Tournament)

Reasoning: These two teams actually didn't play each other in the regular season. Here's the thing though Detroit should be able to shred NKU's zone, even if it's a bit tricky. Antoine Davis can beat pretty much any zone by himself, but you throw in a guy like Noah Waterman at 50% from three as well and good luck shading two. You can get open looks from three against NKU and that's exactly how Detroit wants to play. Waterman is really the key though. Detroit is just a completely different play with him on the court. NKU's zone can't really take away Davis/Waterman and Bul Kuol. I know they are on the road and NKU is hot, but Detroit is sort of the consensus sleeper in the Horizon.

Game is at 5pm at WVU

Reasoning: Alright like the headline says, is it time to worry about Baylor? Long term? No. Short term? Absolutely. Baylor had a legit shutdown with it being reported that 8 different players had coronavirus. That's no practice, no doing anything and recovering from that. It showed against Iowa State and Kansas. Now they have a quick turnaround from the Kansas disaster to West Virginia and have to stay on the road. Matchup wise, it actually benefits Baylor here. They take away what WVU does best and can bring Culver out to defend, especially when they go with Vital at the 5. But the quick turnaround and still not looking right, I'm going to lean WVU here. Baylor runs that no-middle defense, which hasn't looked right since the pause. We saw fouls play a huge part into weird lineups against Kansas and WVU is 30th in the country at drawing fouls. There's a good chance we could see that again. I also want to see how Jonathan Tchamwa Tchtchatoua looks. He looked rusty as hell against Kansas and while he's the 5th most important part to Baylor, his availability is HUGE for what they do. Like I said, long term I'm not worried about Baylor, but short term I am.

Reasoning: Yes it sounds like there's a chance that Ayo is playing and obviously that's huge. But this isn't a great matchup for Illinois with or without him. The biggest reason why is how Michigan runs its offense and how it can bring Kofi away from the rim. At the same time Hunter Dickinson is a grown ass man. We saw what he did playing Luka straight up and while Kofi is stronger and bigger than Luka, Dickinson has the height on him and weight to play with him without help. The real thing here for me though is the wing. Isaiah Livers and Franz Wagner have a HUGE advantage over the Illinois wings. I've been beating the Wagner drum here for a couple of weeks. He's the second best prospect in the Big 10 behind Ayo, arguably the best. He's also one of the best defenders in the country since he's a legit 6'8" and blows up ball screens. I love that Illinois runs 4-out around Kofi, but they don't have a great matchup for both Wagner or Livers. I expect one of them to have a huge game. I also want to see how Ayo looks in game 1 back with a mask.

Game is at 7pm at Georgetown

Reasoning: Does this line feel fishy? Absolutely. But it's March. It's time to play bubble teams that desperately need a win. Xavier took care of business at home against Creighton to get them on the right side of the bubble and now they end with games at Georgetown and Marquette. 2-0 locks them in the Tournament. A split and you're sitting on the bubble. Xavier knows that. The biggest thing here is Georgetown runs a similar style to Creighton. They want to push tempo and not run halfcourt sets. Xavier got back against Creighton and had the right strategy. That should happen again here. Not to mention Dwon Odom is turning into a hell of a defender and a great matchup against Blair. I also just don't trust Georgetown's shooting to continue to be so hot.

Game is at Ole Miss at 9pm

Reasoning: This game is going to be UGLY. Kermit Davis runs that morphing zone that he made famous at MTSU. You know who sucks against zones? Kentucky. They went into an offensive shell when Florida moved into a zone on Saturday. Now a quick turnaround with a team that hasn't seen Ole Miss' zone? Good luck scoring. As for Ole Miss, they struggle big time offensively. They won't be able to score on the interior with Kentucky's length. Ole Miss is 339th in 3pt shooting and 113th offensively. They also run one of the slower tempos offensively. I truly think this game is going to be hideous.

Game is at 9pm at Purdue

Reasoning: You know what's bizarre? Wisconsin is just getting smoked by bigs in the Big 10. Potter and Reuvers have been awful defensively. Now they go against one of the best in the conference in Trevion Williams and a Purdue team that is actually good. Everything is going wrong for Wisconsin right now. They haven't beaten a tournament team since Maryland on January 27. Since then they are 3-5 and quite frankly look like shit. Purdue also has Eric Hunter who matches up perfectly against Trice defensively. Wisconsin refuses to play its best 5 and nothing is going to change my mind here.

Game is at 7pm at Cleveland State (Horizon Tournament)

Reasoning: These teams played 4 times this year with Cleveland State winning 3 of them by 2, 9 and 12. The biggest reason why though? PFW couldn't take care of the ball. That's all it takes for them to cover here. Cleveland State is good, don't get me wrong, but they take some of the worst shots you'll see. PFW runs a sagging defense that will just encourage them to take terrible shots. In the one win PFW had they only turned it over 15 times, which sounds like a lot, but again, this is a turnover prone team. They are 342nd in the country in turnover percentage. I'll take my chances that this is the game PFW turns it over less than 15 times.