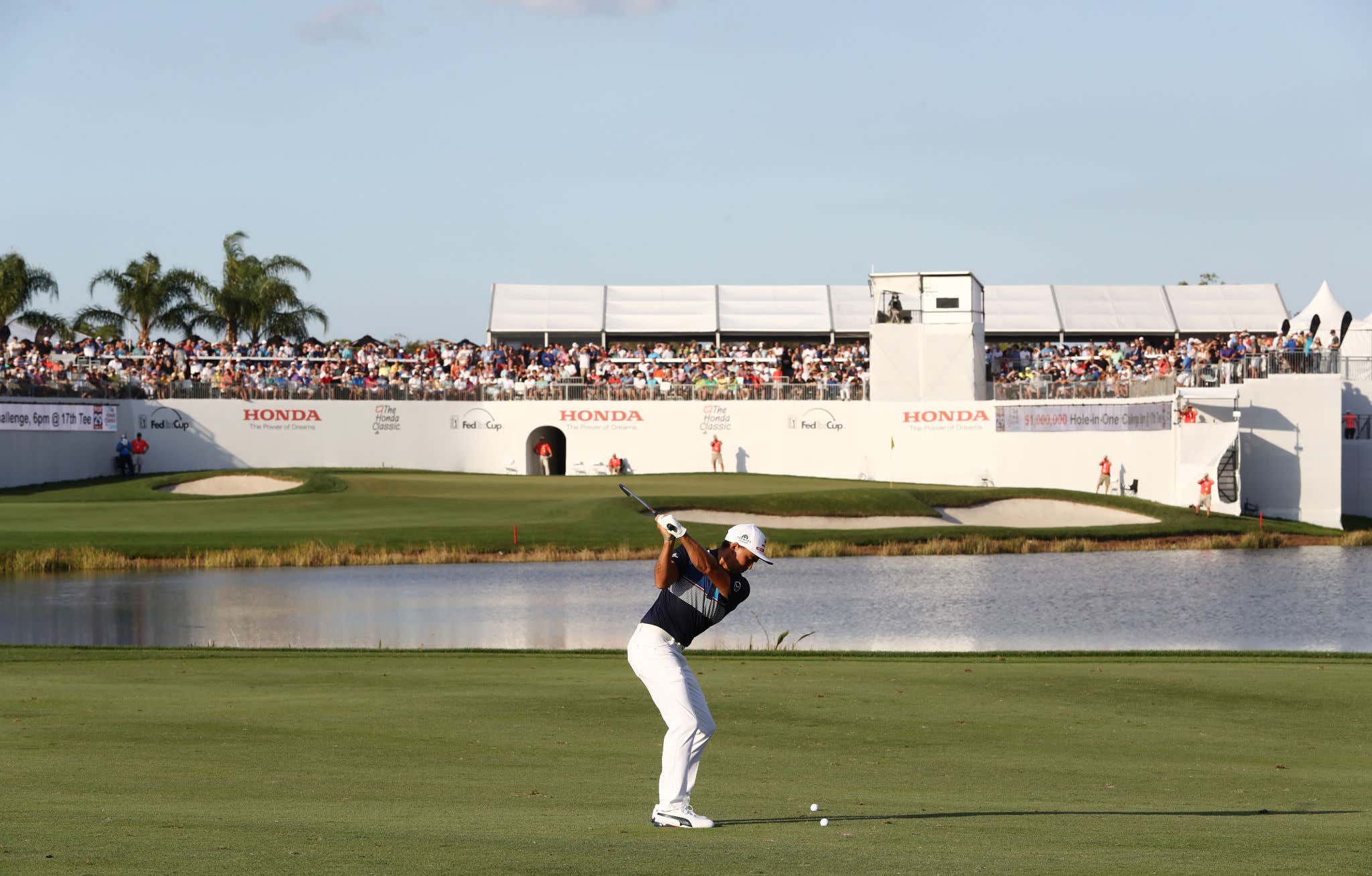 PGA Tour can't stop won't stop. The Florida Swing rages on as we head south down the eastern coast of Florida to Palm Beach Gardens for the Honda Classic.

In my opinion this is one of the more underrated stops on Tour that gets lost in the shuffle of a lot of great tournaments this time of year. There's so many courses out there that these guys just turn into birdiefests - this isn't one of them. PGA National is a challenge every single year and the leaderboards reflect that.

Unfortunately given where it is on the schedule, this field is weaker that it usually is. When you've got a 5 week stretch with 2 WGC's and THE PLAYERS, those other 2 tournaments are going to suffer.

The 2020 Honda Classic was actually on the schedule a couple weeks before THE PLAYERS last year, so it was played before the COVID break. Sungjae Im notched his maiden PGA Tour win with a pair of tournament low 66's, including one on Sunday. Last year's leaderboard and recent winners below: 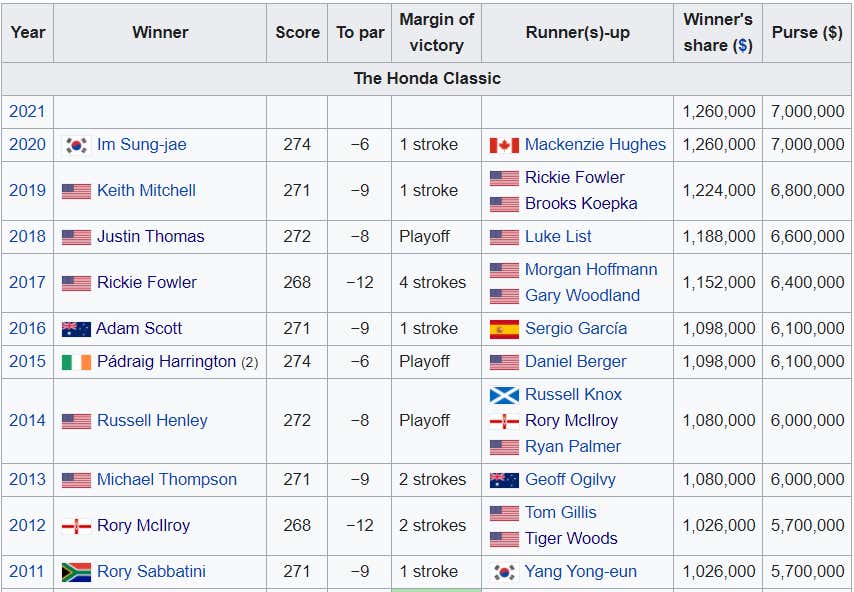 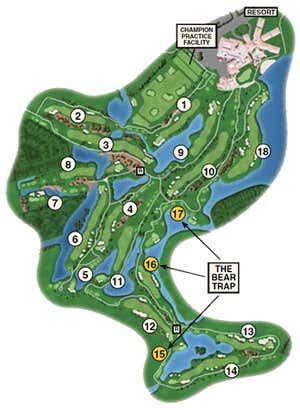 PGA National is an absolute bear of a golf course. Little Jack Nicklaus pun there for ya. The Honda Classic has been contested here since 2007, which coincides with Jack's 2006 re-design of this original Fazio track. For us mere mortals this is a par 72 measuring 7,048 yards from the tips. For these guys, it's a par 70 at about 7,150.

It's one of the most challenging tracks on Tour. Every year the cut line is well over par, usually something around +4. Only 3 times in the 14 Honda Classics at PGA National has the winner been double digits under par.

The main attraction here is the water. It's a factor on 15 holes. There's also a whole mess a bunkers. 78 to be exact. While it's not a terribly long course by yardage (even by par 70 standards), there are numerous hazards that encourage (or even force) players to hit less than driver off the tee, thereby making their approach shots longer and more challenging. The existence of all the water also means there's a ton of wind that swirls and wreaks havoc. So far that certainly seems to be the case this week:

The Bear Trap is something you'll hear a ton about this week. Those are holes 15-17 - a par 4 sandwiched between two challenging par 3's. On average the field plays 279 over par on the Bear Trap every year. Holes 5-7 are laid out in the same way and are similarly difficult, but don't get the shine that the Bear Trap does. The key takeaway is that the par 3's are where the big numbers are made, so par 3 scoring average will be a betting focus of mine. 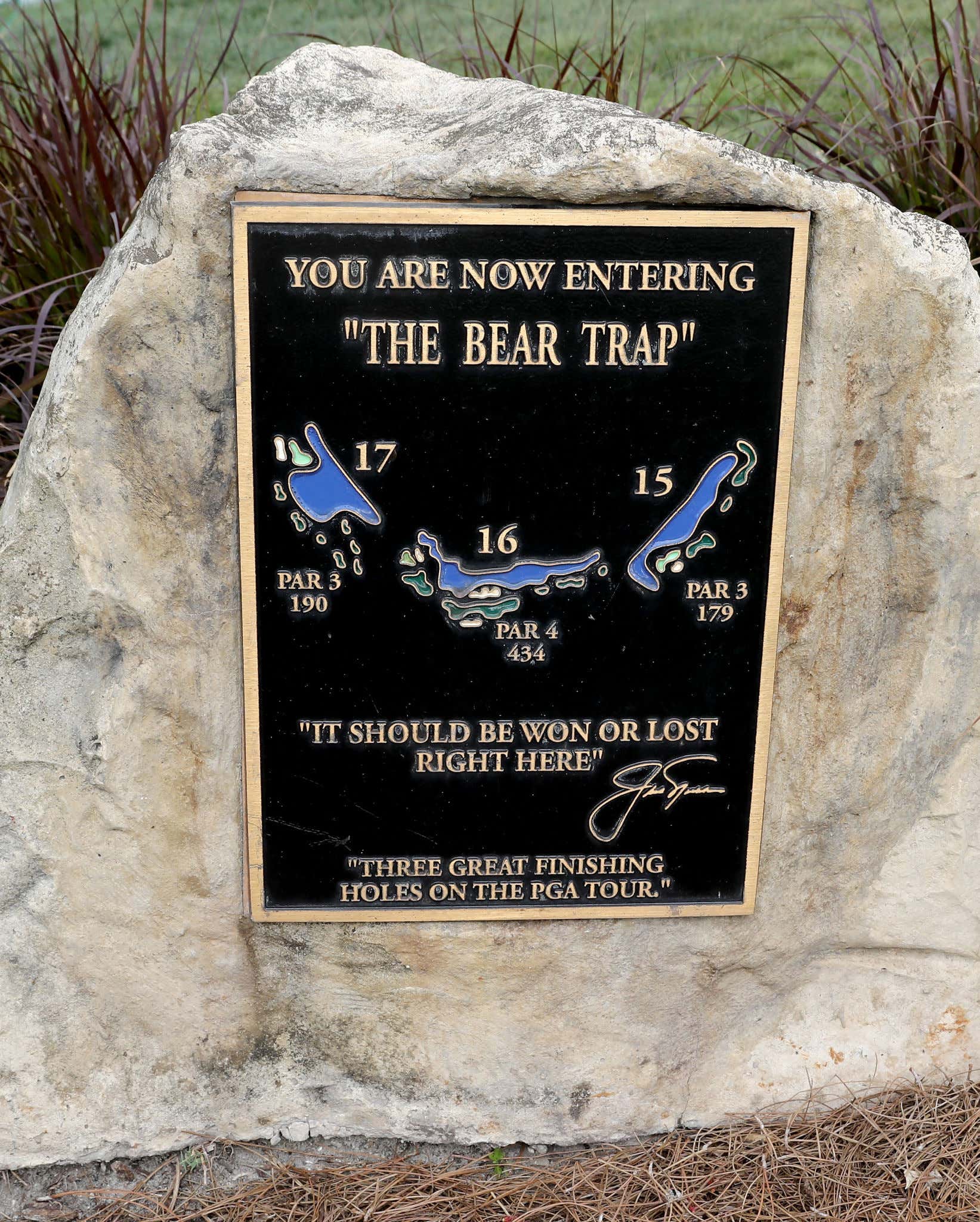 I suppose I could have picked any one of these holes (or even all of them), but I'll just take the first hole of the Bear Trap. Statistics may show that the 17th is a smidge more challenging than the 15th, but it's the notion of "The Bear Trap" that sticks with me here. It's everlooming presence during the course of a round is just so ominous. It'll fuck your day up.

Imagine you've got yourself a good little round going. Maybe even potential for a personal low.

You can sense it a little bit on the front, but you're really just out there getting a little loose, enjoying yourself with the boys. You know you're playing well, but your ears start to perk up when you jot your number at the turn.

Maybe instead of a hot dog or two at the halfway house, you opt for a banana and a nature valley bar.

Aye fellas I gotta tell ya, a little potassium never hurt anybody

You birdie 11 and 13. You're on fire. The cart girl comes around. You battled off the shakes from last night's hangover out on the driving range pre-round and the opportunity is there to get back on the horse. The rest of the group is already 2 deep from the turn and they're going for 2 more each. No thanks. You choose a Gatorade delicious BodyArmor. Strawberry Banana.

Think today might be the day here, boys. First round on me if I can get this thing in the clubhouse.

The nerves start to set in. You step up to the 14th tee. Snap hook. You punch it out of the trees and hit a pretty good pitch out to about 12 feet to save par. You bury it.

You take off towards the 15th tee box gleaming with confidence and pride, knowing you're one step closer to those delicious celebratory beers and 3-4 clubhouse dogs you're craving because you KNOW that granola bar didn't hold you over when SUDDENLY…

This motherfucker stops you right in your tracks.

You see the plaque and you read the words and the diagrams, but really all you see is blue. You can feel the wetness on your brow. You set your tee in the ground and next thing you know you're tapping in a triple on 17 with a ball that came out of a new sleeve you had to open back on that tee box. Your round is shot. Kaput. Finito.

That's what can happen to any of these guys at the Bear Trap. Rounds can go completely sideways in a heartbeat. No matter how well you're playing, you're never safe until you get past these 3 holes. It's the kind of danger you try not to think about for the first 14 holes, but there's no avoiding it once you get there. When you're tracking your guys in this tournament, whether it be win bets, finishing positions, or head-to-heads, the time and the place to watch is when they get to 15 tee.

CBS has their hands full with March Madness, so we're sticking with NBC this weekend.

Pretty warm and pretty windy. This is the weather for Palm Beach Gardens, FL as a whole, and not necessarily the course itself. Which means it might be even windier coming off all that water. Giiiddy up. 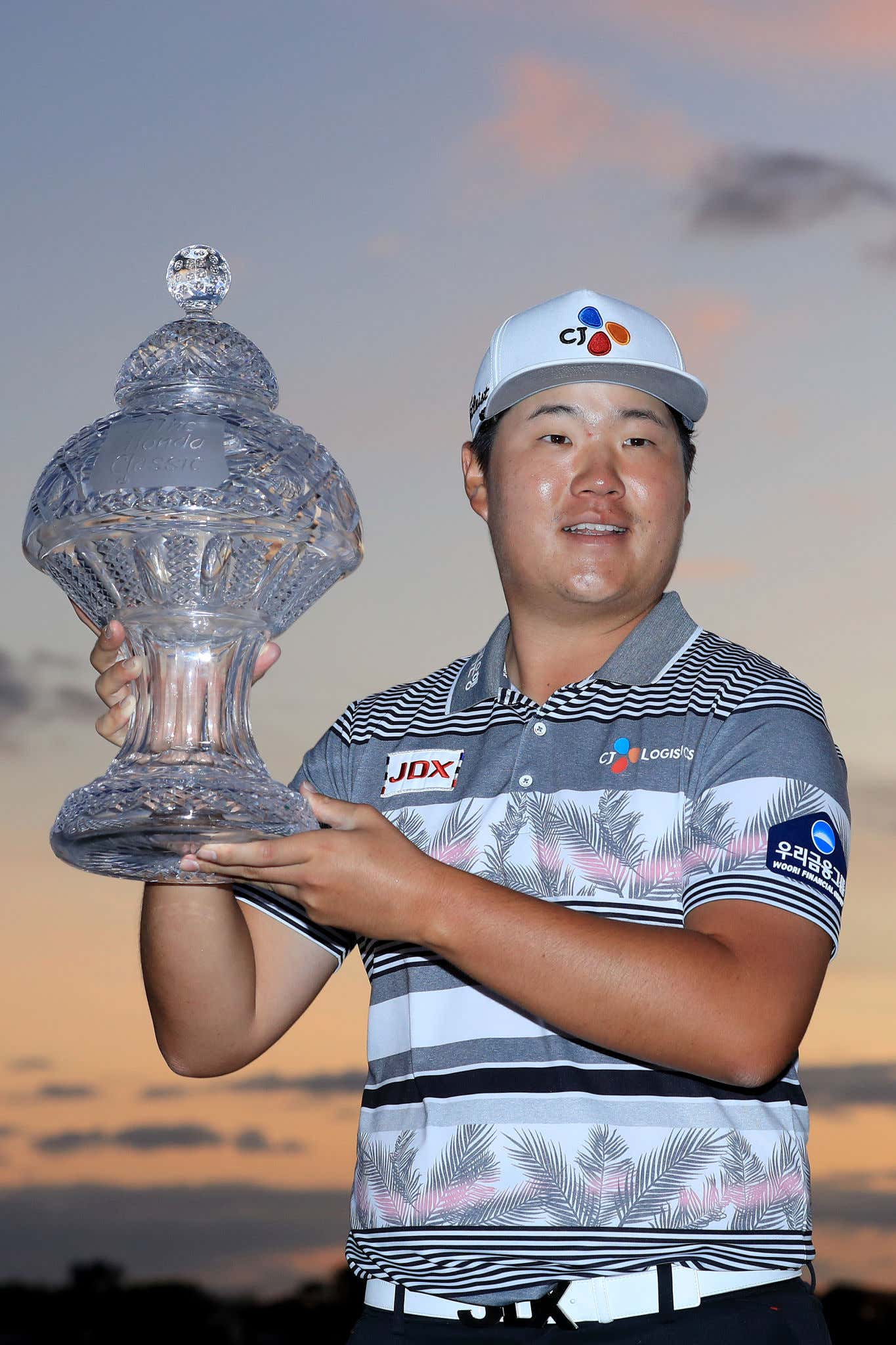 Waterford crystal, much like the Pebble Beach trophy. It's elegant, sure. But does it go the extra mile? Does it bring anything extra to the table? Does it have any pizzazz? Is there any rich history attached to it? I can't quite say that's the case, so this is getting a pedestrian 5.5/10.

Defending champion Sungjae Im is the new betting favorite at +1000 at the Barstool Sportsbook (download the app) after original favorite Daniel Berger withdrew this afternoon with a rib injury. As you can see this field is less than spectacular. Im has been playing consistent albeit unremarkable golf in recent weeks - his last 6 starts are T-12, T-32, T-17, T-28, T-21, and T-17 last week at THE PLAYERS. Very Kisner-esque.

I'm going to go with Joaquin Niemann at +1200. He's a great young player who has been on the verge for a 2nd career win for a while. Almost had it on the Hawaii Swing with a pair of 2nd place finishes. Great ball-striker who's in the top 10 in par 3 scoring this year with a 2.96 scoring average. There's been known to be some leaderboard overlap with here and the Sony Open so his Hawaii performance justifies the pick here.

Rickie Fowler Make The Cut -225 - He's had a lot of success here (won in 2017) so banking on him making it through with the softest Honda field in recent history. Game has been a wreck but I'll bite.

KH Lee Top Asian +650 - T-2 in Scottsdale a few weeks back, made the cut at THE PLAYERS… if I'm gonna fade Sungjae, I might as well go with KH.

Chez Reavie Top American +7000 - Course fits his profile. Longshot but give it a go.

Winning Margin - Playoff +350 - Feels like we're due for a playoff. Lotta tight finishes recently but haven't had one since the Genesis.

Small note, big credit to me for not betting the official Tony Finau FOMO pick last week. Guy was a disaster. We'll be back before long though.