There's the anarchy from the first round. Granted, I didn't assume we'd see a 15 seed or a 14 seed advancing, I thought we'd get upsets early and chalk late. We know for sure there will be at least one double digit seed in the Sweet 16 with UCLA playing Abilene Christian, just like we all wanted. We got the guys out in Chicago and if you're in Illinois, Michigan and Pennsylvania you better be downloading the Barstool Sportsbok. What I plan on doing on the blog each day is this preview. Everything you need to know. Schedule, storylines, picks, if you want something different let me know and I'll adjust. It's March. It's all about adjustments in order to survive and advance. Let's get into it. 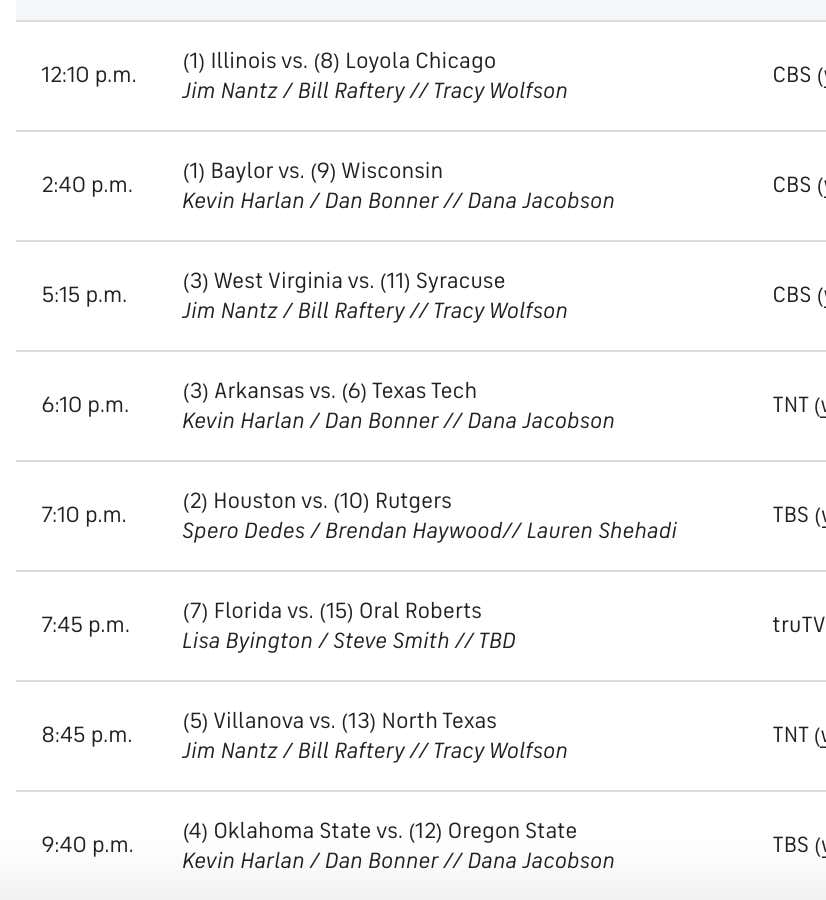 1. The battle for Illinois - Obviously we get right off the bat with Illinois vs Loyola Chicago. I'll say this about Illinois. Teams that have given them trouble tend to be guys that can play Kofi off the court. HOWEVAH, Kofi has drastically improved defensively. I'm not saying he's great on the perimeter or anything. But he's improved how he moves his feet and more importantly not fouling with a cheap hand check. That's important here because while Krutwig is at his best in the post, he is excellent in the high post as someone who can initiate the offense.

2. The Max Abmas show: Florida better be ready because we saw what Oral Roberts can do offensively. Max Abmas led the country in scoring, so it's not exactly a surprise. But at the same time Kevin Obanor dropped 30 and will bring Castleton away from the hoop. Will Florida sit Omar Payne out again? Remember, he had the cheap ass shot on John Fulkerson and Florida held him out the other day. How healthy is Ty Appleby? I assume he's playing but that was a brutal shot he took that was completely unintentional.

3. Will Arkansas be able to score against the Texas Tech no-middle defense: Alright, so let me nerd out here for a second because it's important. Texas Tech's defensive scheme is no-middle and they do it better than anyone in the country. They essentially wall off once the ball gets to the side of the court and force you baseline, using that as a defender. Why does this matter? Moses Moody almost always likes to drive middle. That means he's driving directly into the help and that's where Tech thrives with turnovers. Moody is going to have to change his attack method to get baseline and be comfortable pulling up there instead of from the free throw line.

4. Are we getting good Brad Davison again: Brad Davison somehow looked like one of the best scorers in the country against UNC. Gonna be a little more difficult to do that against Baylor but the point still stands. Brad Davison has been historically awful this year inside the arc - shooting 22%. Now he gets to deal with Jared Butler, MaCio Teague and Davion Mitchell. Have fun! Speaking of which, Baylor really needs a good shooting game out of Butler or Mitchell. Teague has been shooting well lately but in order for Baylor to win the whole thing, Butler/Mitchell need to get back to being the best player on the floor.

5. The goddamn 2-3 zone: Here we are again. Round of 32, Syracuse is a double digit seed and they look like the fucking best team in the world again. We're throwing it back to an old school old Big East game with WVU and Cuse. Huggy Bear coming off win 900. Here's the thing. WVU actually is an awful zone team. It doesn't make any sense because of the 4-out, 1-in offense and shooters in McBride and McNeil. But what WVU wants to do is let get Culver active in the post and let McBride take people off the dribble.