Welcome on back. Feels so damn good to have 4 standalone games today. It honestly makes me completely forget it's a Sunday. Just completely thrown off and I'm absolutely cool with it. f you're in Illinois, Michigan or Pennsylvania you better be downloading the Barstool Sportsbook. These blogs will keep going on every day we have games because it's March and this is all that matters right now. Let's get right into it. 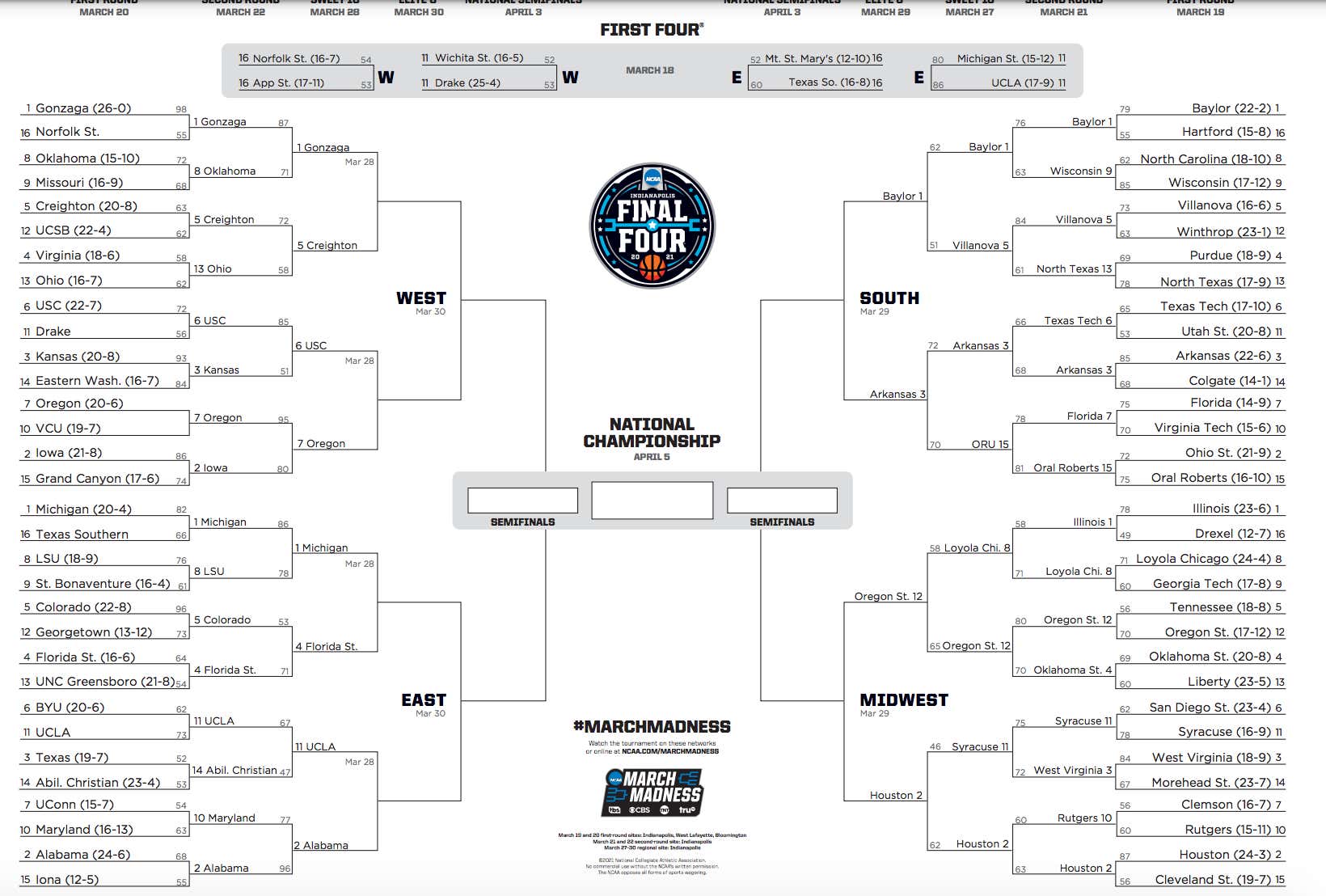 1. How the hell does Creighton play Gonzaga - It's not even like Creighton is a bad team or anything, I just have no idea how the hell they gameplan here. You typically don't want to speed Gonzaga up. They are LETHAL in transition whether its Kispert pulling up, Timme rim running or Suggs just attacking. The problem though is Creighton is way better in a back and forth game instead of slowing it down. So you try to limit Gonzaga's possessions by slowing down what you do best? Not ideal. Creighton can get hot from three. We've seen Ballock and Zegarwoski flat out win games there. I just have no idea what they do in this sort of game.

2. Is this the game that Michigan really misses Isaiah Livers - We got our chalk matchup in the Sweet 16 in the East region. Frankly it should be the best game of the day flat out. FSU has a ton of guys and it's a standard Leonard Hamilton team. They have size, they go about 9 or 10 deep, they press and they defend. What I am curious about is who does Michigan put on Scottie Barnes? Yes, Gray and Walker are probably the two better college players right now but Barnes is an x-factor. Do you throw Wagner on him? Barnes has too much size for either of the guards. Do you play Chaundee Brown more for this one? This is the game where not having Livers hurts, especially on offense too. I've talked about it before but what makes Livers so important is his ability to space the floor and give Dickinson space to work in the post 1 on 1. You need that against FSU.

3. Does UCLA have the ability to actually defend Alabama - I know it sounds weird since it's a Mick Cronin team. But, uh, can UCLA actually defend? They don't force turnovers. They are an average overall defensive team. They give up a ton of 3s. Not exactly ideal when playing Alabama. The one thing they do well though is rebound. That's important since Alabama is a damn good offensive rebounding team. I know that we're seeing more of a small ball lineup during this run for UCLA and they have defended better, but they haven't seen something like Alabama. Also it needs to be said Alabama has a top-5 defense in the country. They can throw different looks on guys like Johnny Juzang and Tyger Campbell to completely breakup what UCLA likes to do.

4. The battle of Bill Walton - Late night, we should be getting Walton on TV and we get Oregon vs USC. Giddy up. The best player remaining in the Tournament is probably Evan Mobley (or Jalen Suggs). He draws comparisons to Chris Bosh and rightfully so with his mobility, size and ability to hit that midrange jumper. These are the two best teams in the Pac-12. Oregon always had top-15 talent, they just battled injuries this year and you're seeing a healthy Will Richardson and Duarte playing like an All-American. I'm curious to see what Oregon does defensively here. Against Iowa they essentially let Luka get his points and dared the supporting cast to beat them. They didn't. We could see that same deal with Evan Mobley, strictly due to size.