Welcome on back. We made it. It's here. After 66 NCAA Tournament games. After the weirdest season with cancellations, no fans, dealing with COVID, etc. We're here on Championship Monday talking about the two best teams playing each other for the title. That's fucking awesome. Speaking of awesome - the Overs Club. Unbelievable jacket and getting to cheer for the over? Yes please. If you're in Illinois, Michigan or Pennsylvania you better be downloading the Barstool Sportsbook. Let's get into it. 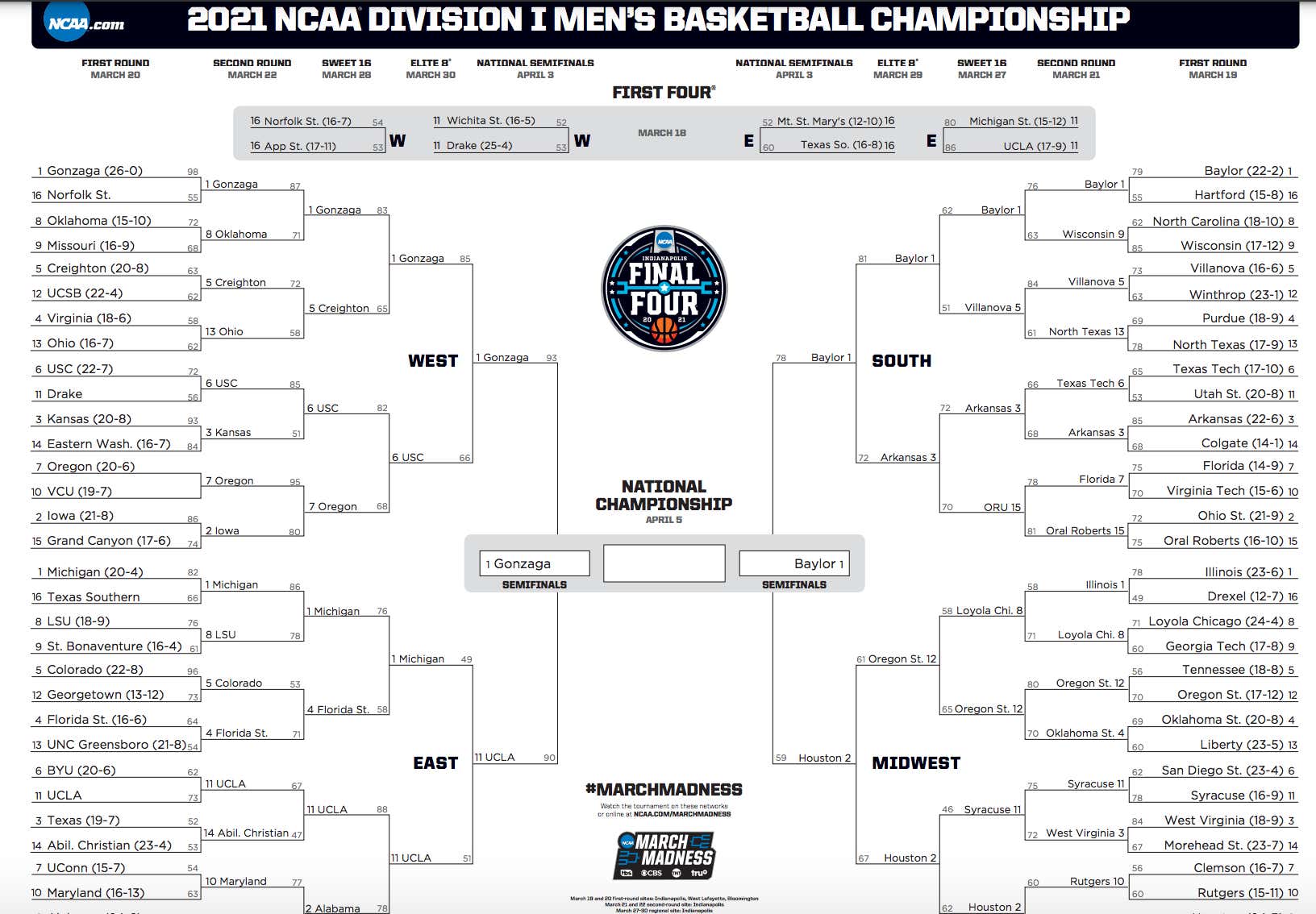 1. Gonzaga's undefeated season on the line

3. The entire view of Gonzaga can shift

4. Gonzaga can be the first West coast team since 1997 to win the title

5. The ultimate exclamation point on Scott Drew having the best rebuilding job in sports history

1. Davion Mitchell vs Jalen Suggs - Two of the three best NBA prospects in this draft (Kispert the 3rd lottery pick) and there's a decent chance we get this matchup. Mitchell is the best defender in the country. Suggs is the best defender for Gonzaga, we saw him chase Juzang around on Saturday. Both are the reason each team go. Yes, Jared Butler got the rewards this year and is the name, but Mitchell is the guy you need to cut off. Houston put Jarreau on Butler and I thought that was a mistake. Mitchell easily initiated Baylor's offense and the game was over in 10 minutes. Timme has looked unstoppable for Gonzaga, but Suggs is the difference maker. He's the guy that attacks, can get buckets and get others involved. This is the best individual matchup we could ask for.

2. How does Baylor stop Timme? - When Baylor defended Udoka Azubuikie last year, they used this defense that we don't typically see out of them. They fronted Azubuike and used Vital as a safety to help and float around. The difference here is Gonzaga typically has 4 shooters around Timme. You can't leave off of Kispert. The only time they can run this sort of defense is when Watson comes into the game. You can 100% leave Watson when he's running the four. They do have JTT and Thamba who is big enough to defend straight up. The problem is are they able to stick in the high ball screen and what happens when Timme is up in the high post as an initiator.

3. What role player steps up, Matthew Mayer or Joel Ayayi - Both are capable of going and getting 20. Shit, we just saw Ayayi do that against UCLA. Pretty good 4th or 5th option to have! When he gets going offensively it makes that Gonzaga offense even more unstoppable. You can't leave anyone. You have to defend everyone as Ayayi can create for others too. On the Baylor side, Matthew Mayer is more than a gorgeous mullet. He comes off the bench as a 6'9" scorer. He's a mismatch. Now Kispert can step out and defend him but Mayer is a dude who can score. With Baylor having 3 guards typically out there and then leave the lane open with Mayer out there, Gonzaga has to stay disciplined because that's when Mitchell and Butler attack off the bounce.

4. Gonzaga's defense has to stay home - Yes, Gonzaga actually has a good defense. They are 8th in the country on KenPom. Yes, people get skewed on their opinion of them because of tempo and a ton of possessions. But Baylor is the No. 1 3pt shooting team in the country. They also are a top-6 offensive rebounding team in the country. Gonzaga has to stay home and stay disciplined. We saw them a couple times help off of Jaquez and Juzang against UCLA. You can't do that with Baylor when Mitchell or Butler is driving and it's one of them, Mayer, Teague and Flagler on the perimeter. You can change defenses depending if Vital/JTT/Thamba are out there together. They aren't going to beat you offensively. Baylor's offense is predicated on PnR and the guard play. Gonzaga can struggle there. It's one of the few weaknesses they have.

5. How is the game officiated - This might be the biggest question out there. We have tons of complaints about officiating but now we need them to let the boys play. Also a reason here? Gonzaga's depth is a bit of a concern. What makes them so good is moving Kispert to the 4. The ability to get Nembhard eligible right before the year is why Gonzaga is undefeated. They really only have 2 guys off the bench - Watson and Cook. Cook was big against UCLA in the first half, but Baylor does have a bit more depth. They bring Mayer, JTT and Flagler off the bench. They can keep the 3-guard look no matter what. They can keep the 4 shooters on the floor with Mayer.

Reasoning: I'm not very comfortable with the Gonzaga pick, I do like the over way more. But it feels like Gonzaga avoided its scare. I also trust them at the free throw line way more than Baylor, so if it's a close game we can see Gonzaga get over the number at the line. Ultimately, I think Gonzaga's offense and Baylor not really having a great matchup with Timme or defending the continuity ball screen that Gonzaga runs will be enough. I also trust Gonzaga to take care of the ball. Baylor thrives on ball pressure and Gonzaga has two point guards out there in Nembhard and Suggs.