Do people know about Keeneland Burgoo? If not, more people need to know about it. It's by far the best stadium food in the country. I know, I know. Keeneland isn't a 'stadium' but you get what I'm saying. It's beautiful and glorious. Listen, it doesn't sound like things that would go together, but it does. It's a magical mix of multiple taste profiles that you eat in the Keeneland breeze and it's heaven. It's like a meaty stew with a tang. It can also be used with squirrel and rabbit and such, but this is Keeneland. They class it up with stew meat.

All I know is when you go to Keeneland if you don't get the burgoo, you're simply not doing Keeneland right. There are few rules when you go to Keeneland. The first, dress nice. This is a classy place we're talking about here. You can't be rolling up in jeans and a t-shirt. Second, get the Burgoo. Third, tailgate at the third turn. Well, at least that was the way before it turned into a pay lot and all this other stuff. Very few things better than sitting at the third turn at 11am on a Thursday in April.

But back to the Burgoo, I can't stress how good it is. You like veggies? Got that. You like beef? Bam. You want bourbon to go with it? You're now a friend of mine. I'm actually now on a mission to find more shit like this. Unique food/drinks at tracks. You got one that sticks out? Let me know. But for my money this is the best stadium food in the country. You can take your standard stadium food, all good. You can take whatever your baseball stadium sells as speciality, fine. Burgoo tops it.

I talked about it earlier this week, but I'll say it again. I plan on doing horse racing content and really growing it common man style. I bet pretty much daily on horses. It's something I always liked. I also like to play cheaper pick-4s and 5s. I'll target somewhere between $30-80 tickets. You'll rarely see me play an all unless it's a small field and makes sense. I'm not saying I'm an expert or anything like that, but we're going to give out some pick-4s and 5s each week. I know some of horse racing twitter and people can be stuffy. I want this to be fun. It's supposed to be fun. That said, here's what I go today at Keeneland thanks to HollywoodRaces for the late pick 4 (starting race 7). 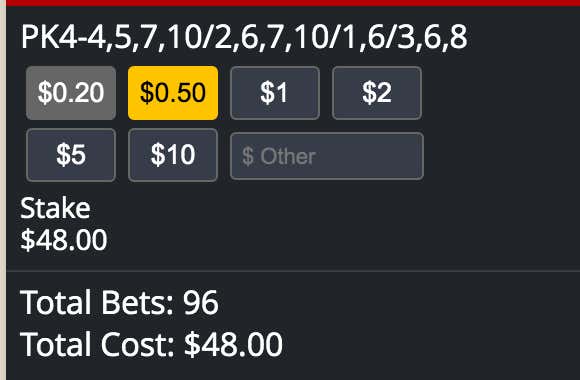