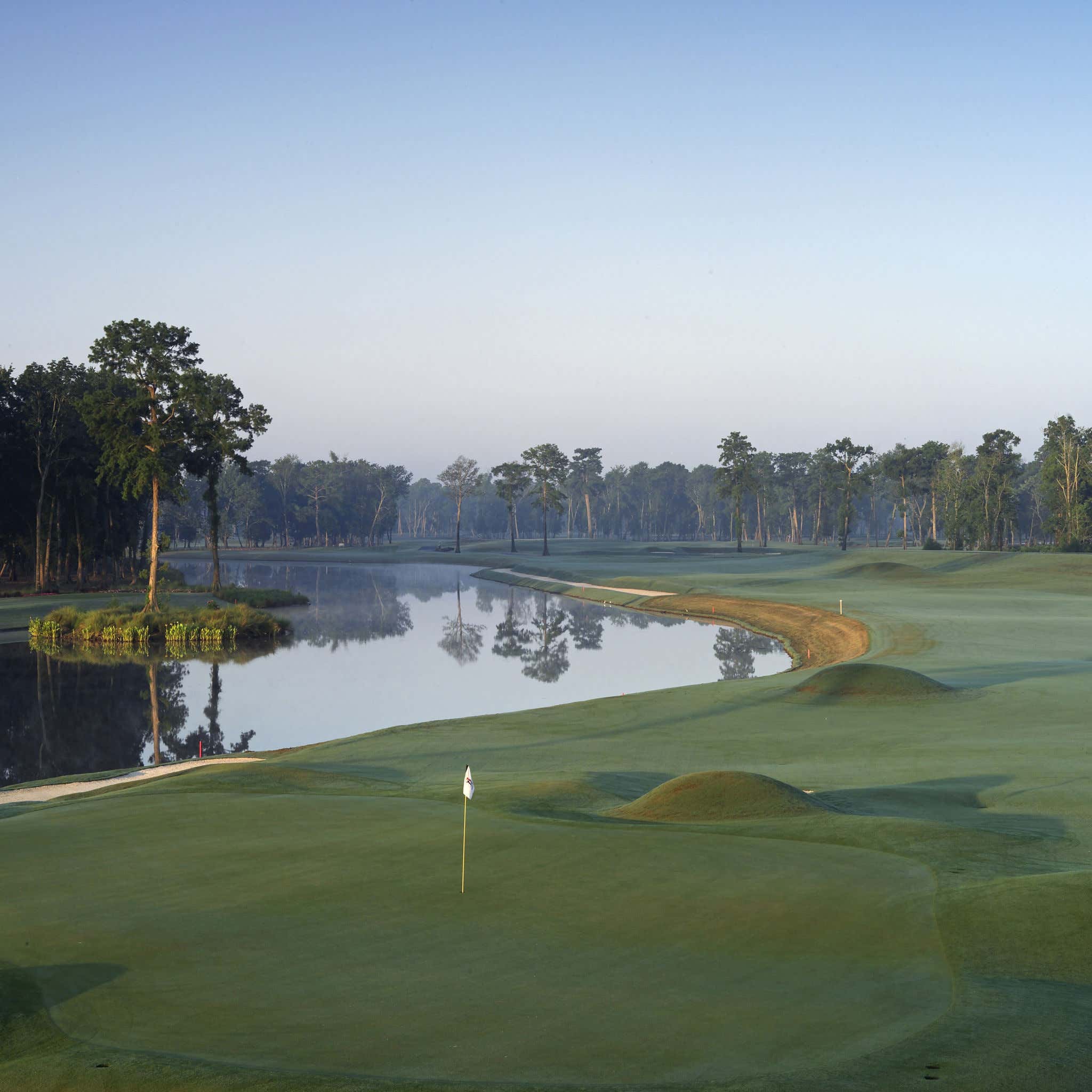 Welcome the Zurich Classic, where some of the PGA Tour's best are pairing up to take on TPC Louisiana in the only team event of the season. It's a bit of a weird one but it's refreshing. I wish the Tour would tinker with modified formats a bit more often. The European Tour seems to do it all the time. Hell, they've got one where there's a 36-hole cut, then a 54-hole cut, and then 6-hole match play in a 24-player bracket to determine a winner. They get weird with it and it's awesome. The PGA Tour should too, and this is about as weird as they've gotten starting back in 2017.

The format is this: 80 teams of two, stroke play. 36-hole cut of 35 teams and ties. The 1st and 3rd rounds are best ball and the 2nd and 4th rounds are alternate shot. So coming down the stretch on Sunday, you're going to watch the drama of guys having to deal with the trouble their teammates put them in and the pressure of trying to avoid putting them in it in the first place. Fun stuff.

This event got banged last year due to COVID, so Jon Rahm and Ryan Palmer are your defending champions from back in 2019 with a score of -26. You'll notice those best ball rounds on Thursday and Saturday are especially low across the board. 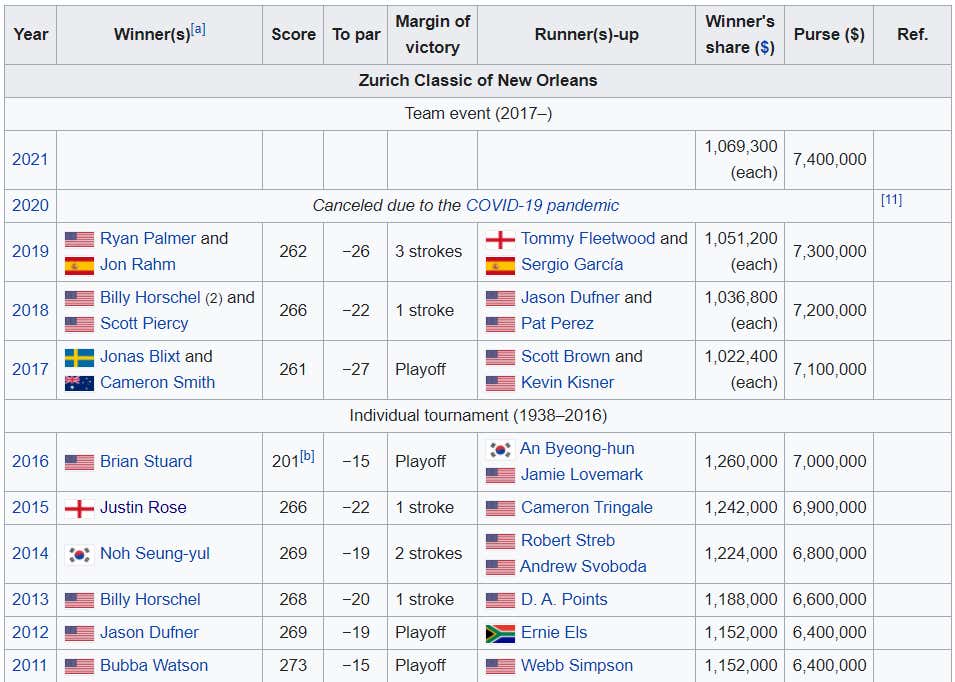 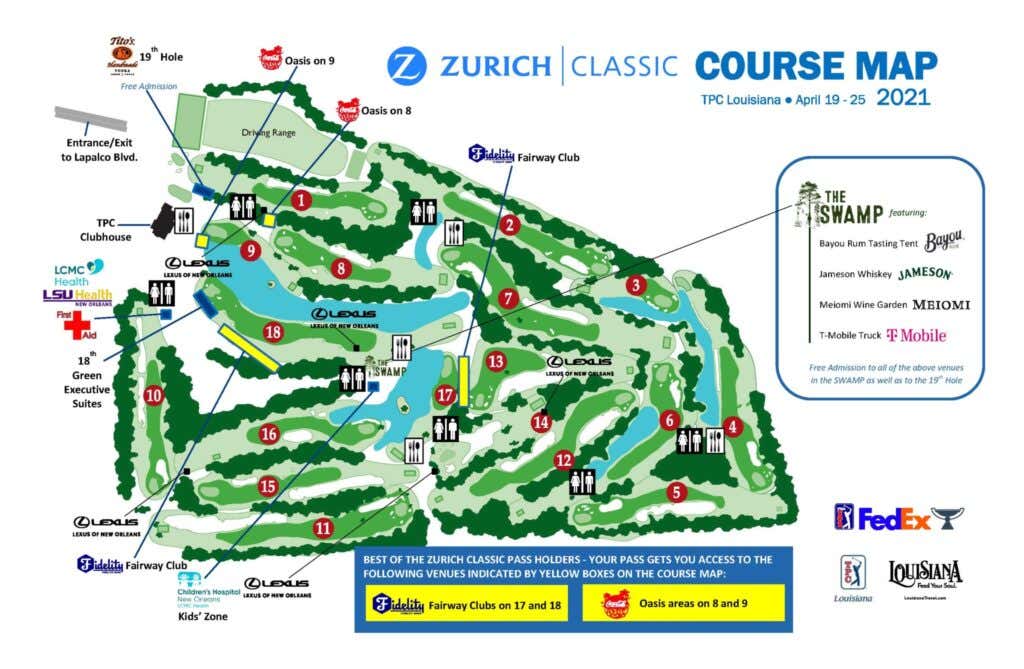 TPC Louisiana is a par 72 measuring by 7,425 yards. It's designed by Pete Dye… because of course it is. Everything on Tour was designed by Pete Dye. That means tons of bunkers (100 of them in fact), water lurking off the tee in a variety of spots, and of course… bulkheads. There's a good amount of target golf here once again, much like it was last week at Harbour Town. The one thing that sets this course apart from last week is that this course has some serious length to it. All of the par 3's measure over 200 yards and a handful of the par 4's push 500 yards. This place requires a balanced game to compete.

Oh and one more thing. There's hella gators out there. They're even in the @PGATour header: 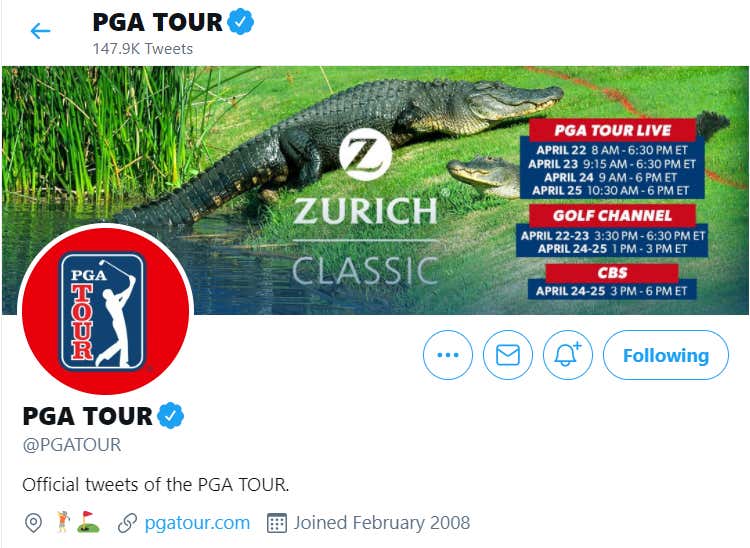 The 3-legged gator known as "Tripod" is the star of the show and roams the 17th and 18th hole, so keep an eye out for him.

Speaking of the 18th hole, we've got a doozy on our hands here. I'm always a fan of finishing par 5's. Great opportunity for dramatic leaderboard swings and keeps the drama alive for anybody within 2 shots of the lead on the last tee. You've got water all down the right side and bunkers on both sides of the landing zone off the tee. That long fairway bunker on the right is very typical Pete Dye. It's long enough to keep those who miss the fairway from likely getting home in 2, and short enough for each of these pros to likely give it a go if they do hit the short stuff. Great hole.

Good variety of weather here. Potential weather issues Friday and Saturday. Wind is a factor throughout.

Featured groups for PGA Tour Live this week are below: 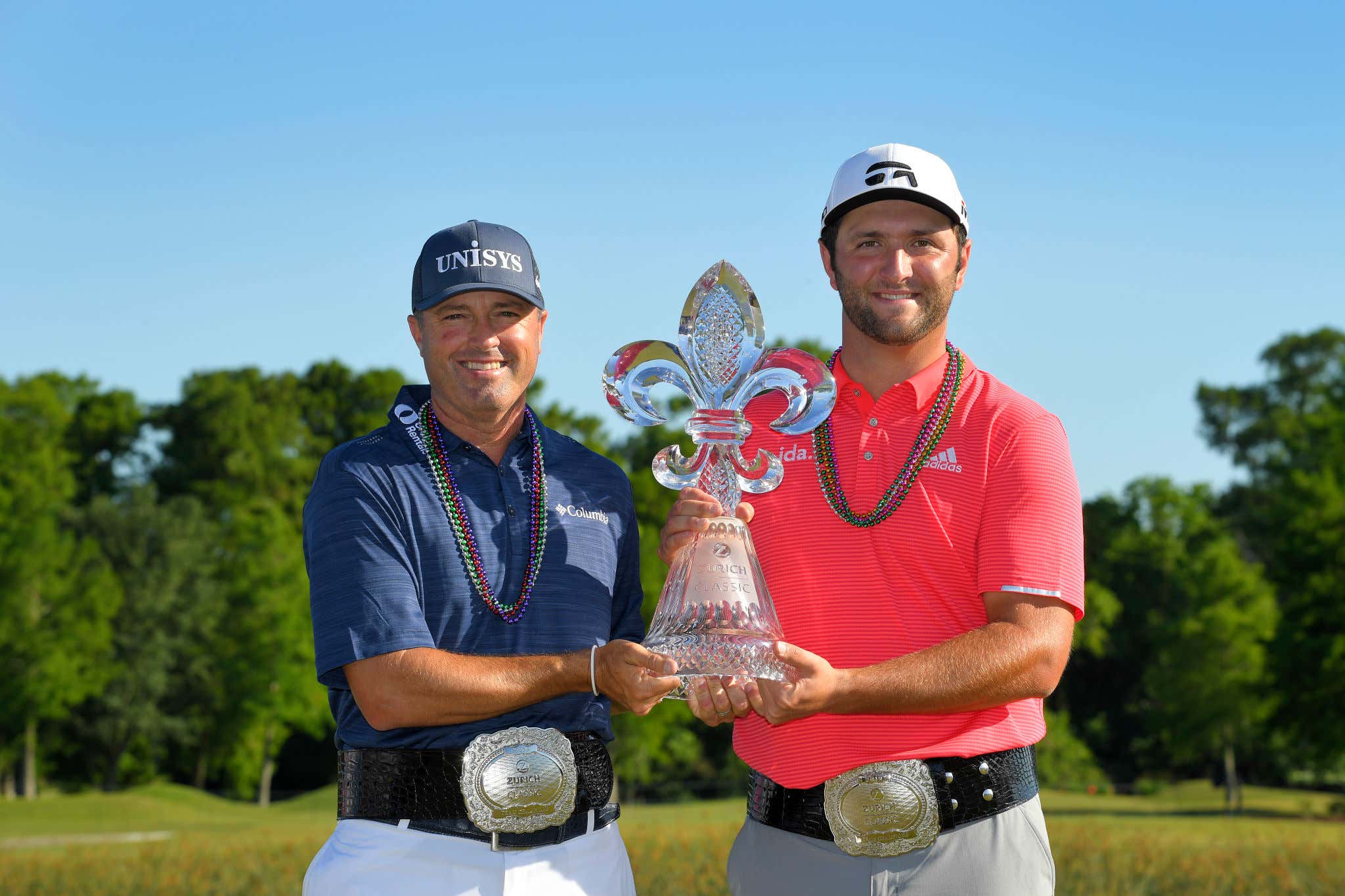 GREAT trophy. If you've ever been to Nawleans, you've seen that symbol everywhere. Hell we see it on the Saints helmet every Sunday. It's the Fleur-de-lis, French for "Flower of the Lily" (if you want to rabbithole that one, here you go). When I evaluate trophies here, there are a lot of points awarded for a trophy that captures the local flavor. This does that to a T. When you see that trophy in a trophy, you know EXACTLY what tournament was won. The belts they added to give this a heavyweight tag team feel was just running up the score. I gotta give this a 9.2/10.

Teams Cantlay/Schauffele and defending champ Rahm/Palmer are the co-favorites at +650. If I had to pick between the two, it would be the defending champions - Rahm is superior to Cantlay/Schauffele and is coming off a strong weekend at Augusta, and Ryan Palmer is having a farrr better year than I think people are realizing. Or at least a lot better than when they won this in 2019. This tournament is pretty tough to handicap so as much as I hate to do it, they're my chalky pick for the week.

This is one of those picks where if you don't take it, you're going to be looking at the leaderboard halfway through Sunday and kicking yourself thinking "well of course these fucking guys are at it again, that's what they do at the Zurich". I'm taking this each way with a Top 5 +1000 and Top 10 +400 too. Don't miss out.

Grace/Varner Top 5 +625 - Great backdoor T-2 last week by Varner at the Heritage for his career best finish. Grace has seen better days since blocking that ball over the railroad tracks at Chambers Bay in 2015, but he's had a small resurgence in the past year or so. I like these guys as a duo.

An/Im Top 5 +750 - Course reminds me a lot of the Honda where Sungjae has his biggest win. Plus it feels like he's due to bounceback from a mediocre stretch. These two have played well together before.

Burns/Horschel Top 10 +225 - Horschel's been playing great for months now. Burns was hot but kind of flamed out after blowing Riviera. Hoping he'll find it this week.

Finau/Champ 1st Round Leader +2200 - These guys can make hella birdies and Thursday is best ball, so they could go LOW.

Finau/Champ To Win +1600 (Warning: This is a FOMO bet. It would be extremely Tony Finau of him to win a team event to prolong the streak of not winning a legit event. Plus this team is literally calling themselves Team Send It. They're going to be fun to watch)

There ya have it. Enjoy the Zurich Classic.