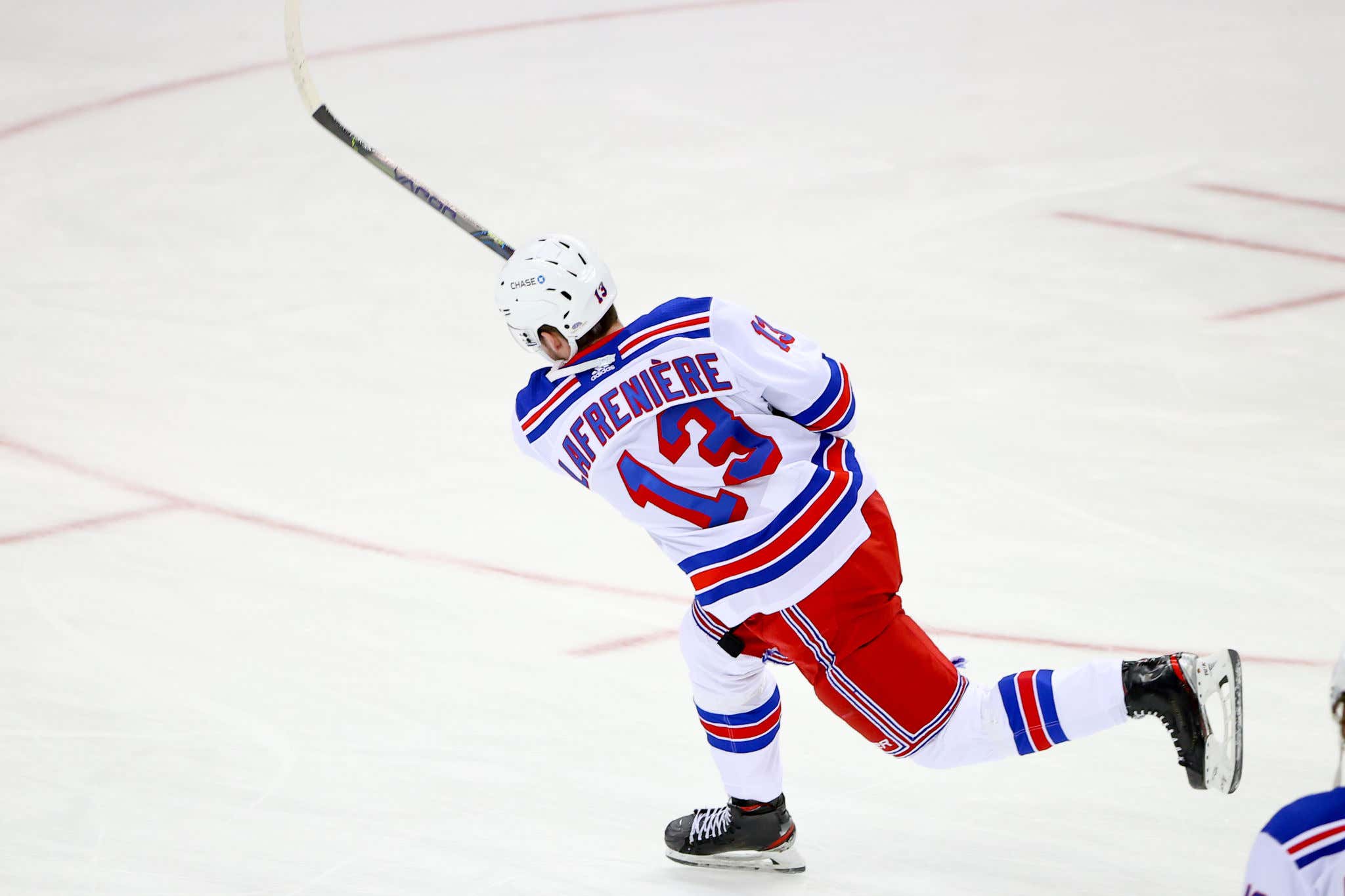 The potential for this year's New York Rangers squad is sky high - but expectations are all over the map. They're a playoff lock for some, not there yet for others and a "dark horse" for all the fence-sitters. Wherever this team sits at the end of the regular season will be in large part due to how far their five most important skaters carry them. Those five are the reigning Norris Trophy winner Adam Fox, their offensive dynamos Artemi Panarin & Mika Zibanejad and recent top draft picks Kaapo Kakko & Alexis Lafreniere. Will Foxy, Breadman & Zib maintain blistering paces they've posted over the last two shortened seasons? Is now the time for their #1 and #2 picks to break out? Let me break them down for you one by one…

If there's one miniscule complaint you can make about Adam Fox it's that he's not a "finisher". He's not ripping clappers top shelf nor is he dangling end to end with any sort of regularity. Fox is the ultimate facilitator, always looking to make that extra pass to give a lucky teammate all the glory - therefore he's not getting a ton of pucks on net. His first two seasons equate to around 150 shots on goal over 82 games. For Mr. Norris to hit 11 or more, you're asking him to shoot over 7% (high for a blueliner) when he's at 5.7% for his career. The Rangers have scoring talent all over their roster who will be reaping the rewards of Fox's precision playmaking. Fox himself though won't be breaking the 10-tally barrier.

For a lot of the same reasons above, I fully expect Fox to push 60+ assists in his first full season. Again, too much proven talent around him followed up with another wave finally ready to hit their strides. Plus, Gallant has hinted at peeling back his PK minutes to ensure he's on the ice more often in position to do what he does best - play with the puck on his stick. More options + more puck possession = 68+ points for my man Foxy.

Happy belated 20th bday to Alexis Lafreniere as he enters his sophomore season with the pressure of needing to scratch the surface of his first-overall pick potential for the Rangers to make some noise. In an awkward rookie campaign (thanks Covid), Laf managed to pile up 11 goals in his final 41 games - all at even strength in limited minutes. With a year under his belt, a full camp, a top-six spot locked & more expected PP2 responsibilities there's no reason he can't improve on that scoring pace even a smidge, which is all it'd take to comfortably hit the over.

51 points is a lot though. That's a top-100 season among forwards and, for a guy I see as more of a scorer a la Chris Kreider (higher ceiling obviously, I just mean a "more goals than assists" type) that'd mean Laf is gonna have to push 30 goals in order to smash 50 points. He'll fall into a few more apples just because of who he'll be skating with 5x5, but I'm not sure it'll be enough without a PP1 spot readily available.

Panarin is habitually floating around that 30-goal plateau: 30, 31, 27, 28, 32. Should he hit 30 again? Sure - but it wouldn't shock me to see the Breadman end up just a hair below while still cracking triple-digit points as the ultimate driver of Rangers offense. I'll lean on the over though because…I mean…it's Artemi fucking Panarin. The goal total may be a coin flip, but 97+ points is a breeze for the NHL's leader in points-per-game over the past two years (outside of Edmonton of course). If he continues that same pace, Artemi can miss 12 games and still cash this ticket. Slam dunk.

Nobody is more hyped about Kaapo Kakko than my buddy Mike Grinnell:

I wanna jump on the hype wagon soooooo bad…but I can't. Not yet. That doesn't mean I don't believe Kakko can be great, it just simply means I'm not willing to bank on such a huge offensive step this year like Grinnell is. Still, the Finnish phenom made major strides in his 200-foot game last season which should give the kid some real confidence with a "clean slate" under a new coach. Now he's getting the opportunity to skate full-time with the Bread & Butter duo who helped Jesper Fast rack up 29 points in 69 contests (a 34-point 82-game pace) a couple years ago. Kakko hasn't eclipsed 40 over his first two seasons combined - but on skill alone he's gotta be 8 points better than Fast in Year 3…right? Right??

I'm a little concerned if he doesn't hold his own early he could be relegated to more of a checking role in exchange for, say, Filip Chytil (who'd push 30 goals as a top-six wing, no doubt) - but his leash should be long and he'll be given every chance to succeed. If he can't post an 18/24/42 campaign now, then maybe that 2019 second-overall pick falling into the Rangers' laps wasn't so fortunate after all with guys like Dach, Zegras etc. there for the taking later on.

You fucking kidding me? Over the past two seasons, only Matthews Ovi & Pasta have scored more goals per-60 than Zibanejad. The new $68M Man buried 41 in 57 games pre-Covid & was on pace for 35 last year despite starting off with a mere 3 in his first 27. That means he went white hot with 21 in his last 29. A 37.5 total is laughably low. Hell I'd probably take the over it if were 47.5 and I'm not exaggerating in the least. Zib is among the best lamp-lighters in the league and the trigger man on a powerplay run by Fox and Panarin. Come on. Obviously if I'm so bullish on his goals, 77 points is just as much of a lock for the top pivot on a team that'll once again be a top-ten offense. Free money here. Seriously.

Surprise, surprise - the Rangers guy is on almost all the overs. The only ones I'd smash are both Zibanejads & Lafreniere goals though. Pretty confident in Fox not hitting 11 goals either. The rest are leans triggered by my belief the Blueshirts are gonna be a problem for the league this season & even if they're not, offense has never been their problem of late. There's simply no reason for regression outside of injury. The proven ones are in the same spots they've succeeded in. The upstarts are slated for the best opportunities of their early careers. If you like money, the New York Rangers are here to make it for you.