A BIG 4-1 week last weekend got us back on track to put us at 12-13 and right on the cusp of turning this thing around. Which we're gonna do for good this week. I can feel it in my plums.

Here's what I got.

Few things here, first off, how does the NFL not flex this game to 4:25 p.m. or to Sunday night? Get it the fuck together guys.

It's a short week for the Ravens, which is a plus for Herbert and the Chargers, however Monday's game was at home for Baltimore, but fun fact- did you know teams that won a Monday Night game are 9-0 in their next games dating to last year?

It's a tricky 10 a.m. Pacific time kick for the Chargers, who are 1-3 SU in their past four in the Eastern Time Zone. LA struggles against the run, allowing a league-worst 157.6 yards per game. Despite having a shattered backfield due to injury, the Ravens are still clocking a staggering 148.8 yards per game on the ground. Good for 4th in the NFL.

Speaking of Justin Herbert, he's thrown 11 TD passes against zero interceptions the past three weeks. Herbert ranks fourth in the N.F.L. in passing yards (1,576), with Lamar Jackson on his heels at fifth (1,519).

The Chargers are 8-1 ATS in their last nine games dating back to last season. We can count on Brandon Staley to be aggressive and smart no matter the situation. But the team needs to get its shit together with the penalties, because their 397 yards lead the N.F.L.

Chargers WR Mike Williams, listed as questionable with a knee injury, is expected to play barring a pregame setback, per source. The NFL leader with six touchdown receptions should be in fold.

This line opened at 3.5 and has now moved as much as a full point to 2.5 which means people are hammering the Chargers. Usually an awful sign but I still like San Diego. Call me crazy but I think the Chargers keep this close all day and likely pull it out at the end. 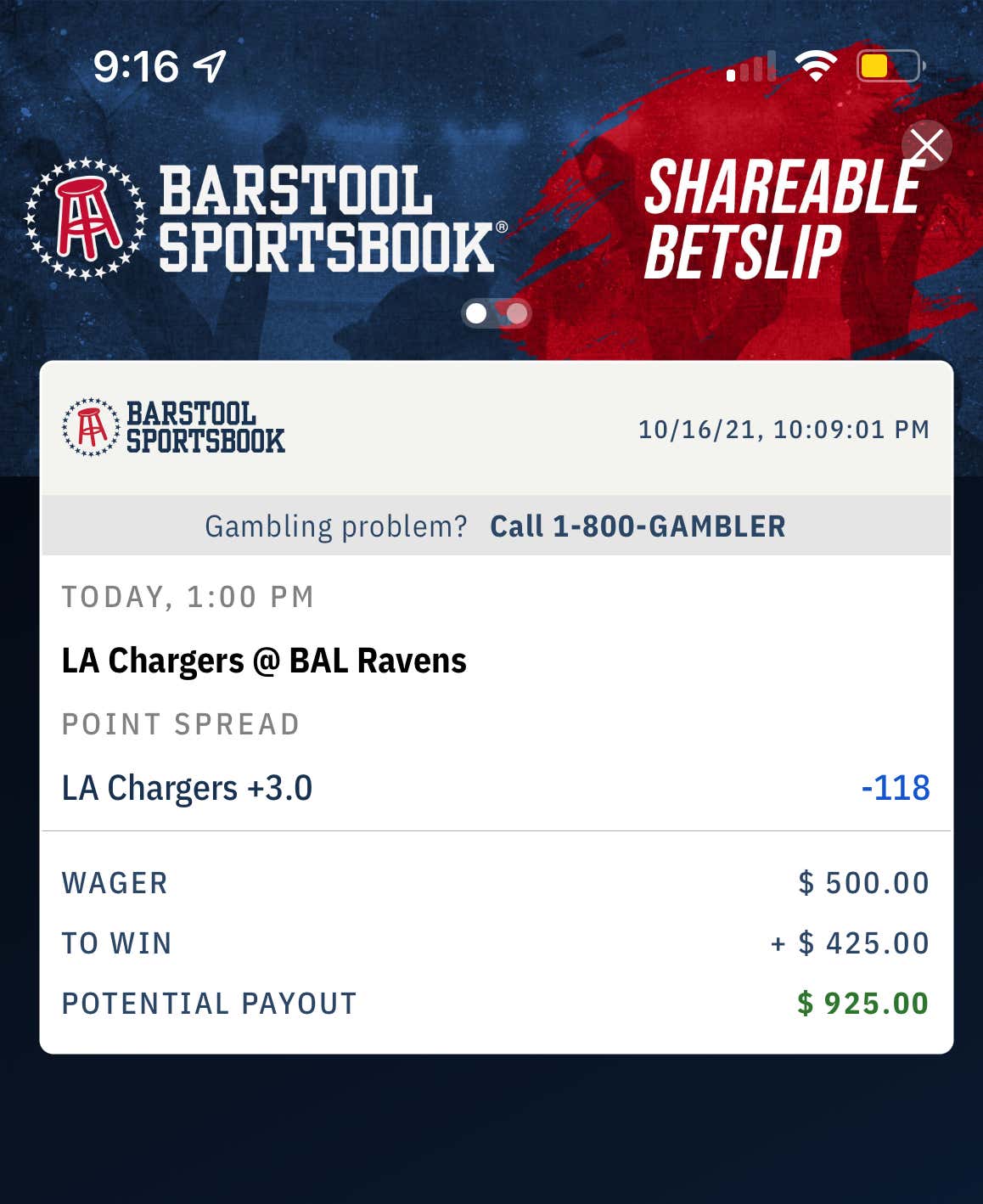 This Broncos team needs a win in the worst way, at home, and the divisional rival aspect as well. Las Vegas' offense has been sputtering the last two weeks, which usually doesn't bode well for a brand new HC and play caller.

But this isn't one of those times. Because longtime special teams coach Rich Bisaccia is the interim head coach. He's well-respected and has been with the Raiders for decades. And new play-caller Greg Olson has worked with Carr before during his rookie season and beat Vic Fangio back in 2014 against SF. The Broncos have no idea what to expect. We should see more of a spread offense with Olson calling plays.

The Broncos are ranked No. 29 in red-zone offense and are 2-7-1 ATS as a division home favorite of late. Abysmal.

I like the Raiders to rally the troops in this one and get things back on track. 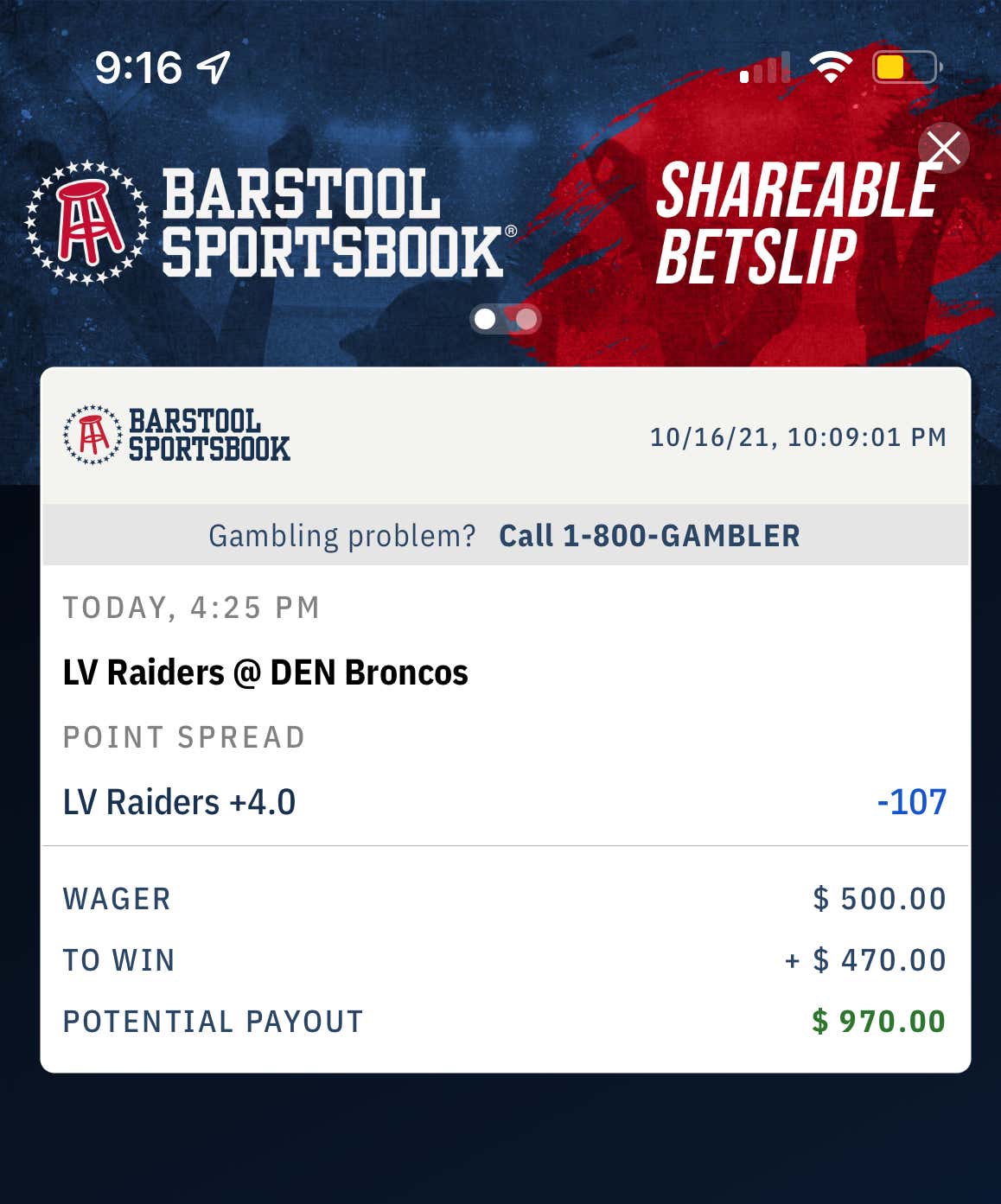 This line opened low and the public immediately jumped all over the Bills, but there's still plenty of value here. I think the line should be 6.5.

The Bills' defense answered any remaining questions in the win over the Chiefs, and their 4.3 yards per play number is a half-yard better than any other defense.

The Titans offense can punish defenses with the run game but isn't complete enough to expect a big point total against a quality unit. Meanwhile, the Titans' defense has been terrible, allowing a season-worst 454 yards to the Jaguars last week.

The Bills are out for revenge after getting stiff-armed by Derrick Henry, Titans last season. They've won their past four regular-season road games by 18+ points. They boast the best offense in the NFL and the best scoring defense as well. They're a wagon and continue to cash so why stop now? 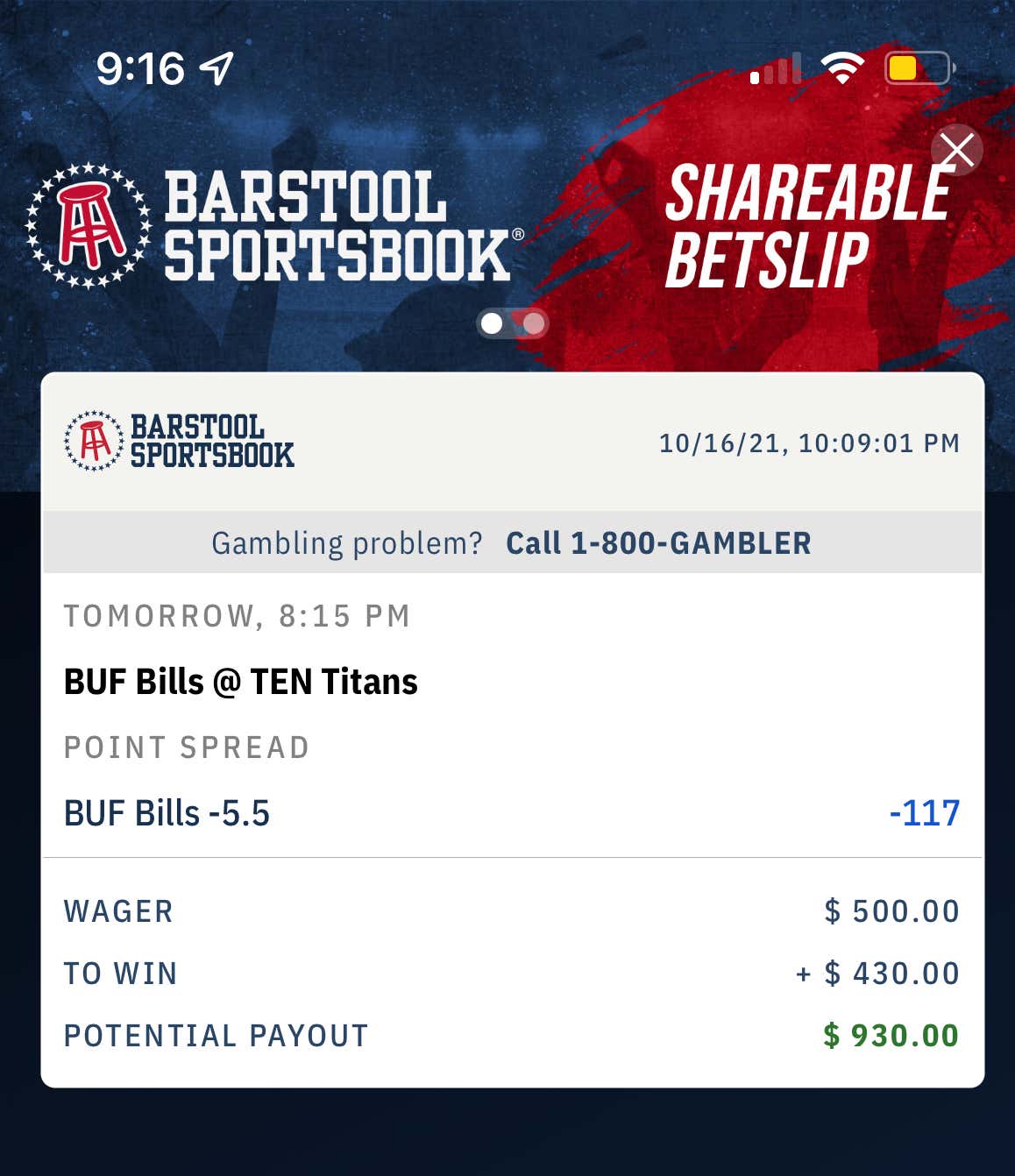 It's hard to bet on a team that's lost 20 straight, but should the Dolphins be laying 3.5 to anybody? They would be 0-5 if not for a late Pats fumble in Week 1.

The Dolphins rank 26th in offensive success rate, while Jacksonville ranks ninth. And Tua Tagovailoa, at this point of his career and coming back from injury, isn't a major upgrade over Jacoby Brissett.

Also, the Jaguars have kind of been London’s home team. They come into this game as an underdog with no wins on the season yet they statistically have the better offense and defense in this game. And the Dolphins have their top receiver and corner out for this one.

Do the smart thing and take the points in this one. 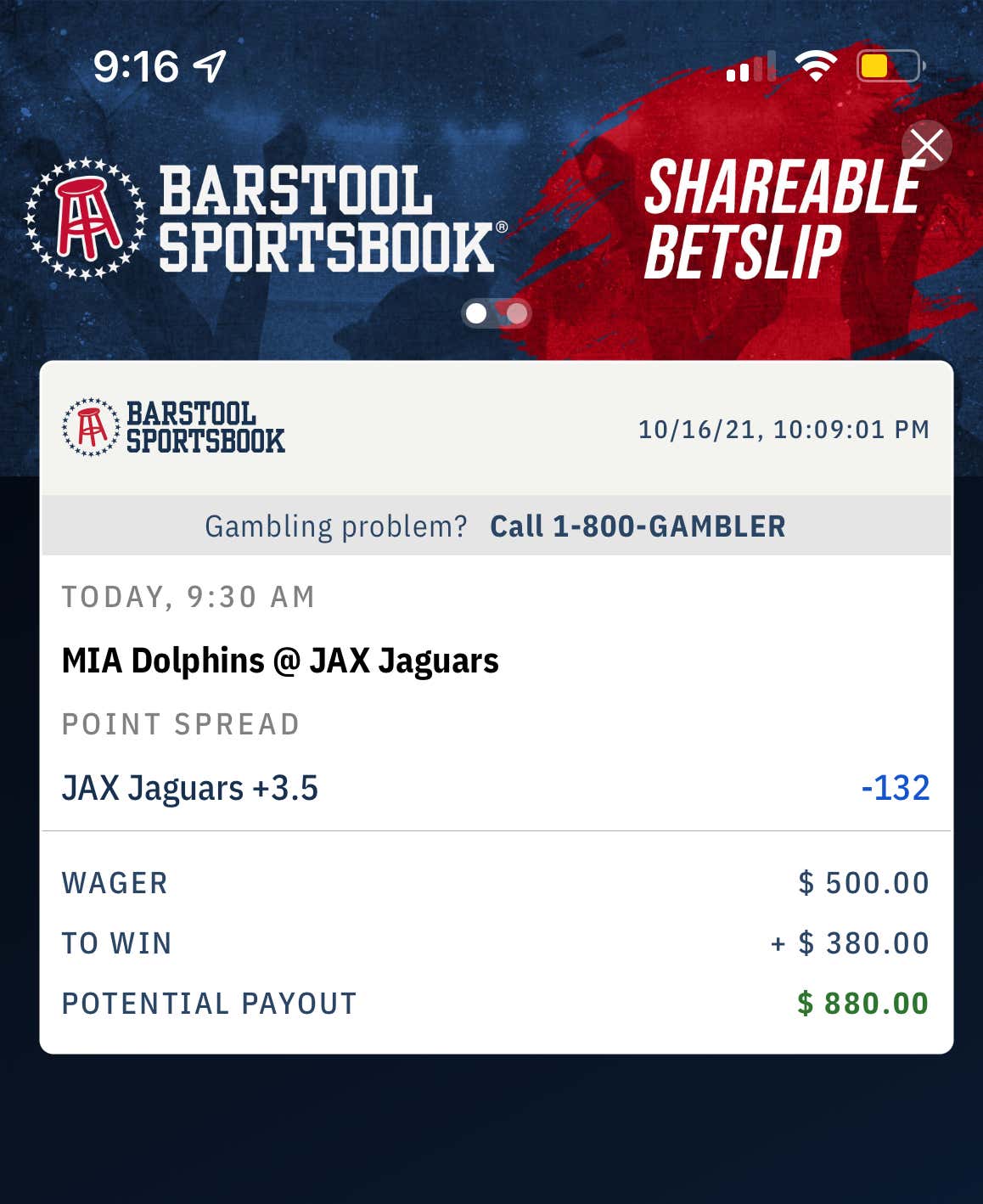 This one sees the Browns seeking their first win vs a 5-0 team or better since 1969.  And the Cardinals going for their first 6-0 start since 1974.

The Cardinals have allowed the 5th most rushing yards in the NFL at 695 yards through 5 games, they’re also allowing RBs to rush for 5.4 YPC which is ranked 31st in the NFL among defenses.  The Cardinals survived their worst offensive showing of the year last week to remain undefeated, and even though they've beaten division rivals in back-to-back games, this might be their toughest matchup yet. They're up against a Cleveland offense that has piled up 639 rush yards the last three weeks. The beat-up Browns defense struggled last week and could do so again here, though the Arizona offense had its worst game and Kyler Murray might not be 100 percent.

Arizona will be without not only their head coach (Covid), but three important players in center Rodney Hudson, tight end Maxx Williams and star pass-rusher Chandler Jones, who has five sacks and 14 QB hits on the year. Kyler Murray isn't 100 percent, either. The Cards, 1-5 ATS in their past six vs. teams with a winning record.

Nick Chubb (calf) is out for the Browns, but the holes will still be open for Kareem Hunt and the No. 1 rushing team in this one.

I think the Browns finally put one in the L column for Arizona in this one. 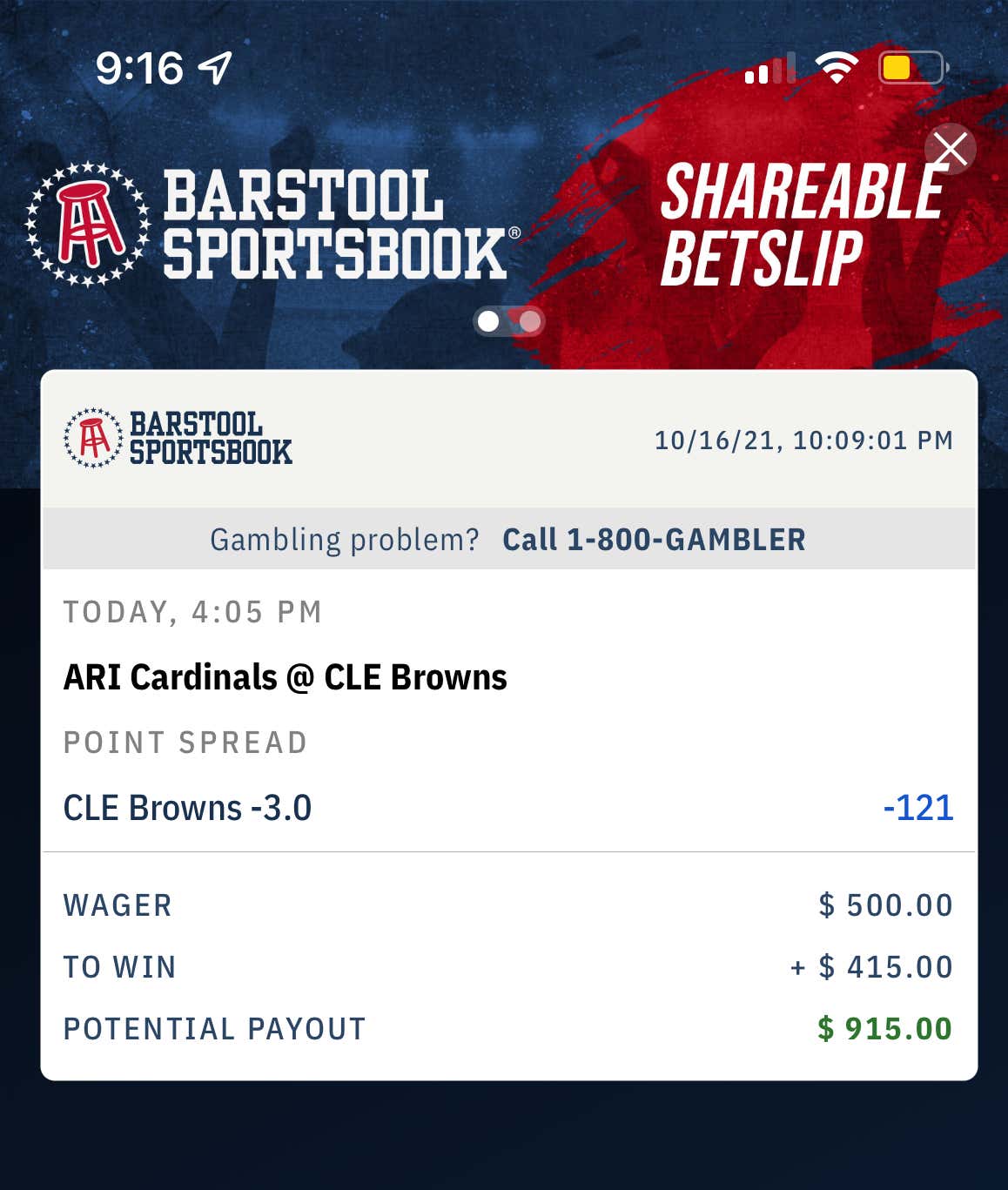