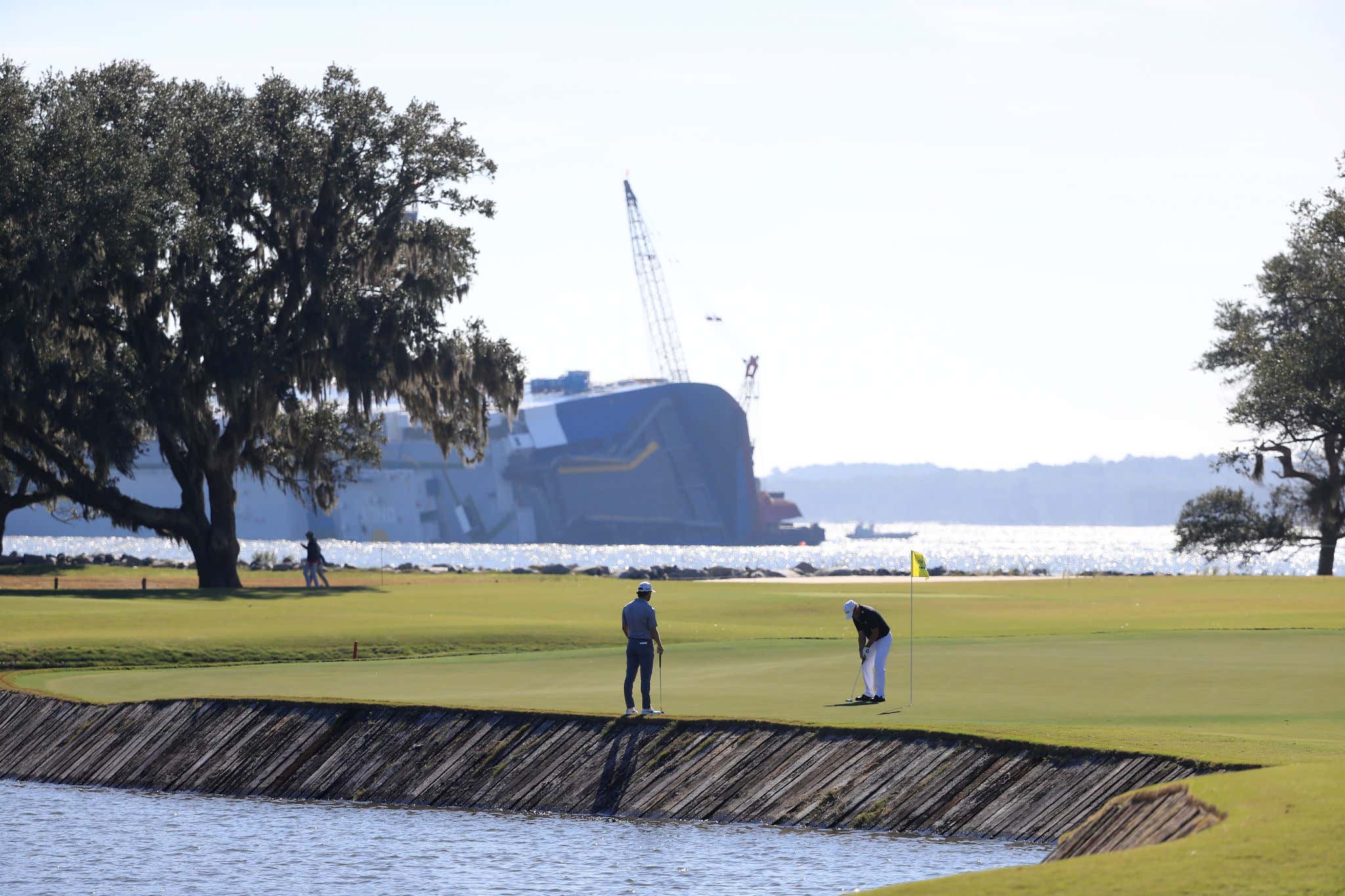 Welcome to the RSM Classic, easily my favorite tournament of the year by a non Big 4 Tax and Advisory firm. With that said, given its spot late in the fall of the wraparound schedule, this tournament tends to be one of the weaker fields of the year. The shorter hitters on Tour tend to feast on the target golf that Sea Island provides, and I think the history of winners here will back that up.

Last year it was a battle of former champions as Robert Streb outlasted Kevin Kisner on the 2nd hole of a playoff to win for the 2nd time here. Both of his PGA Tour wins came here so… yeah it's a fit for him. The full leaderboard and recent winners: 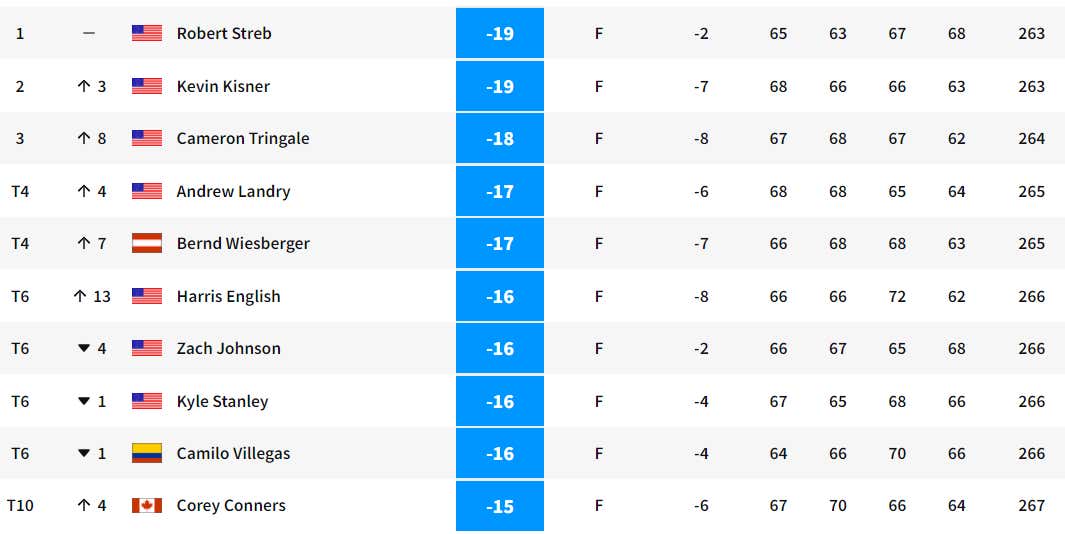 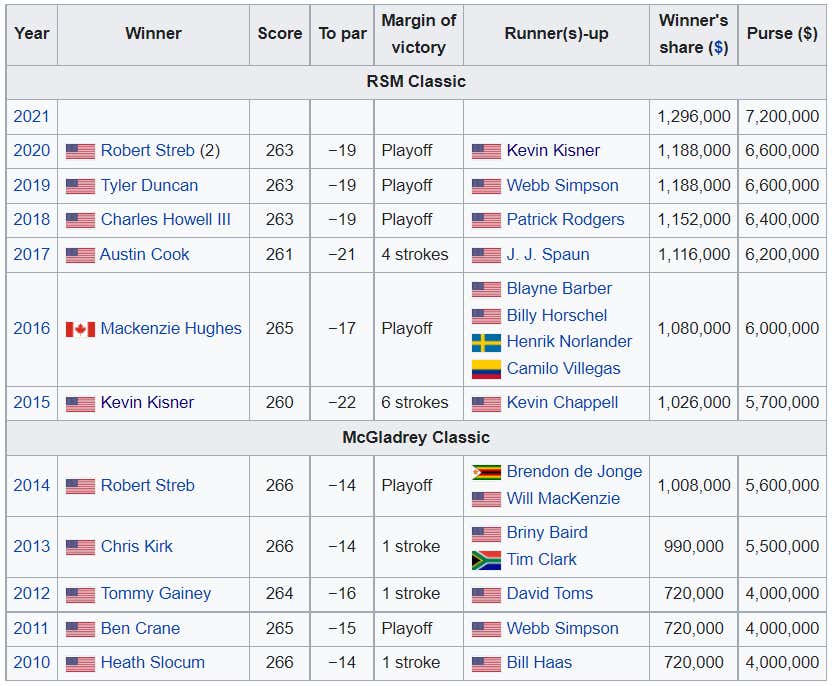 As you can see from the leaderboard and winning scores above, historically this event is a birdiefest. Like a handful of other events on Tour (the Farmers at Torrey Pines comes to mind), this event is played on two different courses with half the field playing on the Seaside course on Thursday and the other half playing the Plantation course. On Friday they flip. After the 36 hole cut (top 65 and ties), all players will play the Seaside course both days on the weekend.

The Seaside course is a Tom Fazio designed Par 70 measuring 7,005 yards, which is the 6th shortest course on the Tour schedule. The Plantation course is a par 72 measuring 7,060. Both feature fast bermuda greens, relatively wide fairways, and imposing water around the greens. I'm not going to spend a lot of time going over the Plantation course because we won't see it over the weekend so let's just say taking care of business on those two extra par 5's will be important and leave it at that.

With the wide fairways, driving accuracy isn't all that much of a factor. With 8 of the 14 par 4's clocking in between 400-450 yards, there will be a ton of emphasis on short irons and wedges, especially on these elevated Bermuda greens with tight runoff areas. You can make mistakes if you miss in the wrong places here. It's all about precision and not distance. That's why you see CHIII and Kisner on that list of past winners. 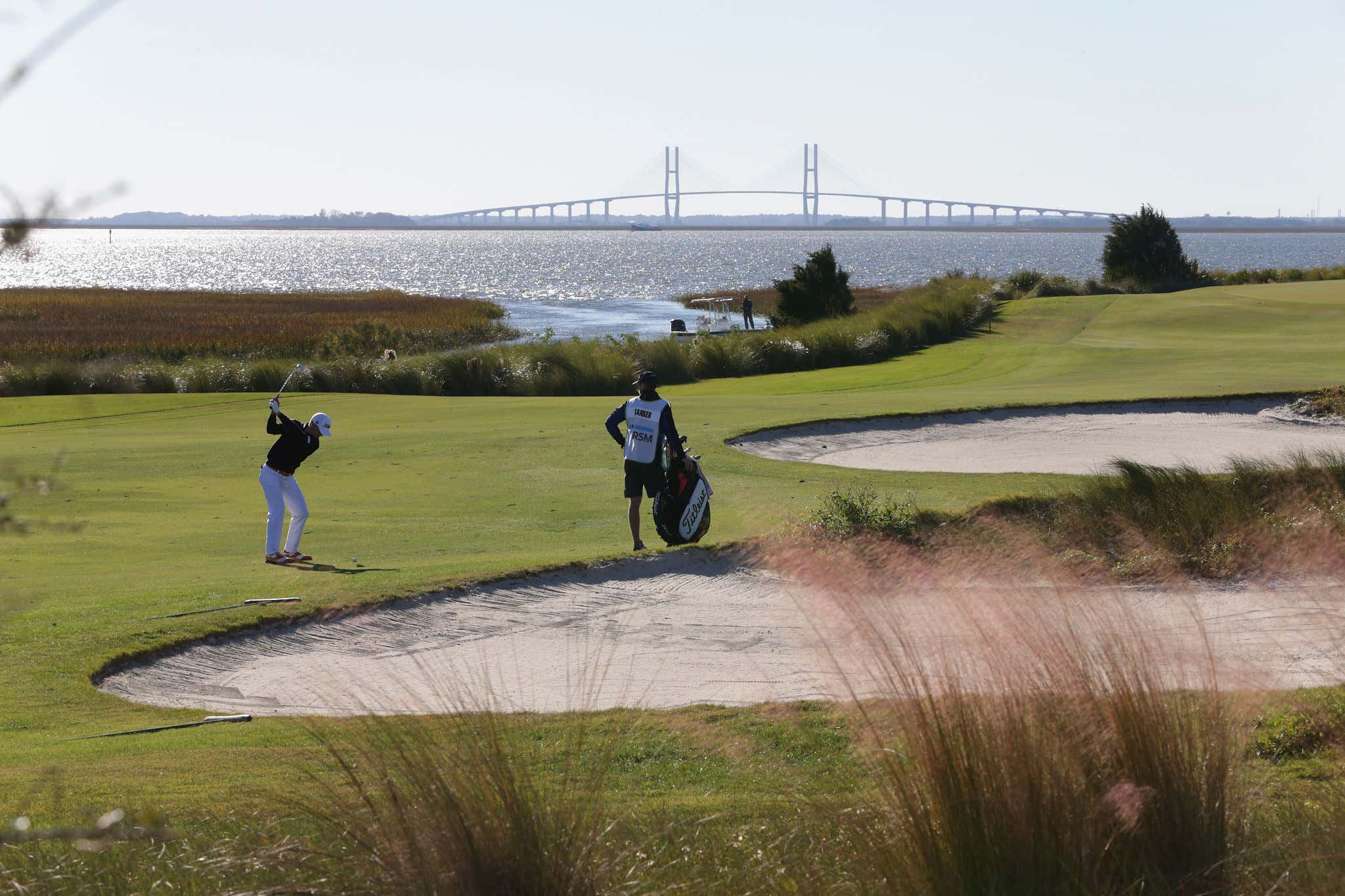 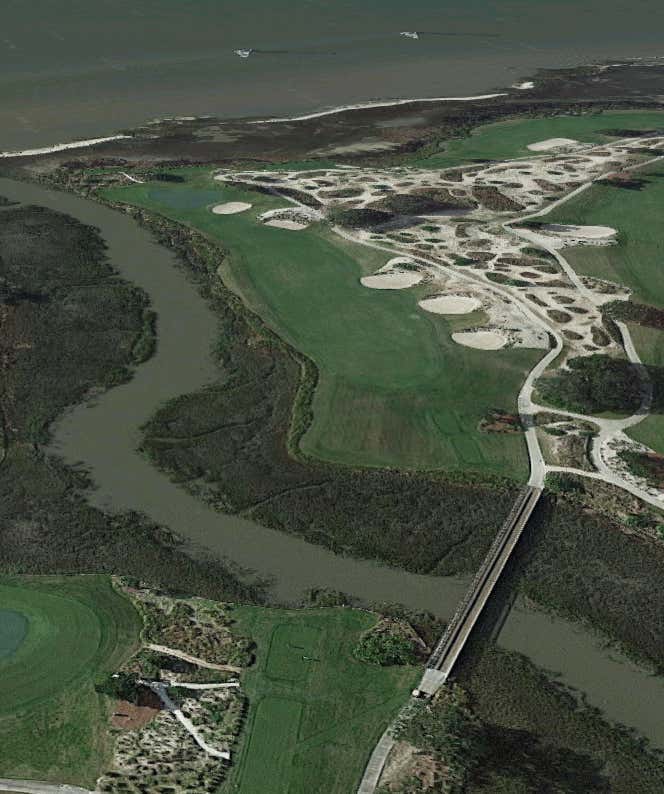 What you see is what you get with this one. And what you get is an unbelievable view of the Saint Simon Sound on your approach. There's not many holes here that are going to bring you to your knees. Little to no carnage. We're going for beauty and aesthetic and #13 has that in spades. Shoutout to Google Maps 3D and myself for nabbing that sick aerial view (drones not yet in my budget).

Little bit chilly in the morning, perfect weather for a Peter Millar QZ (and Sea Island is Peter Millar CENTRAL if you've ever been to the resort…. ya love to see it). Wind looks to be up over the last 3 days here, which is really the only way this short course can protect itself. 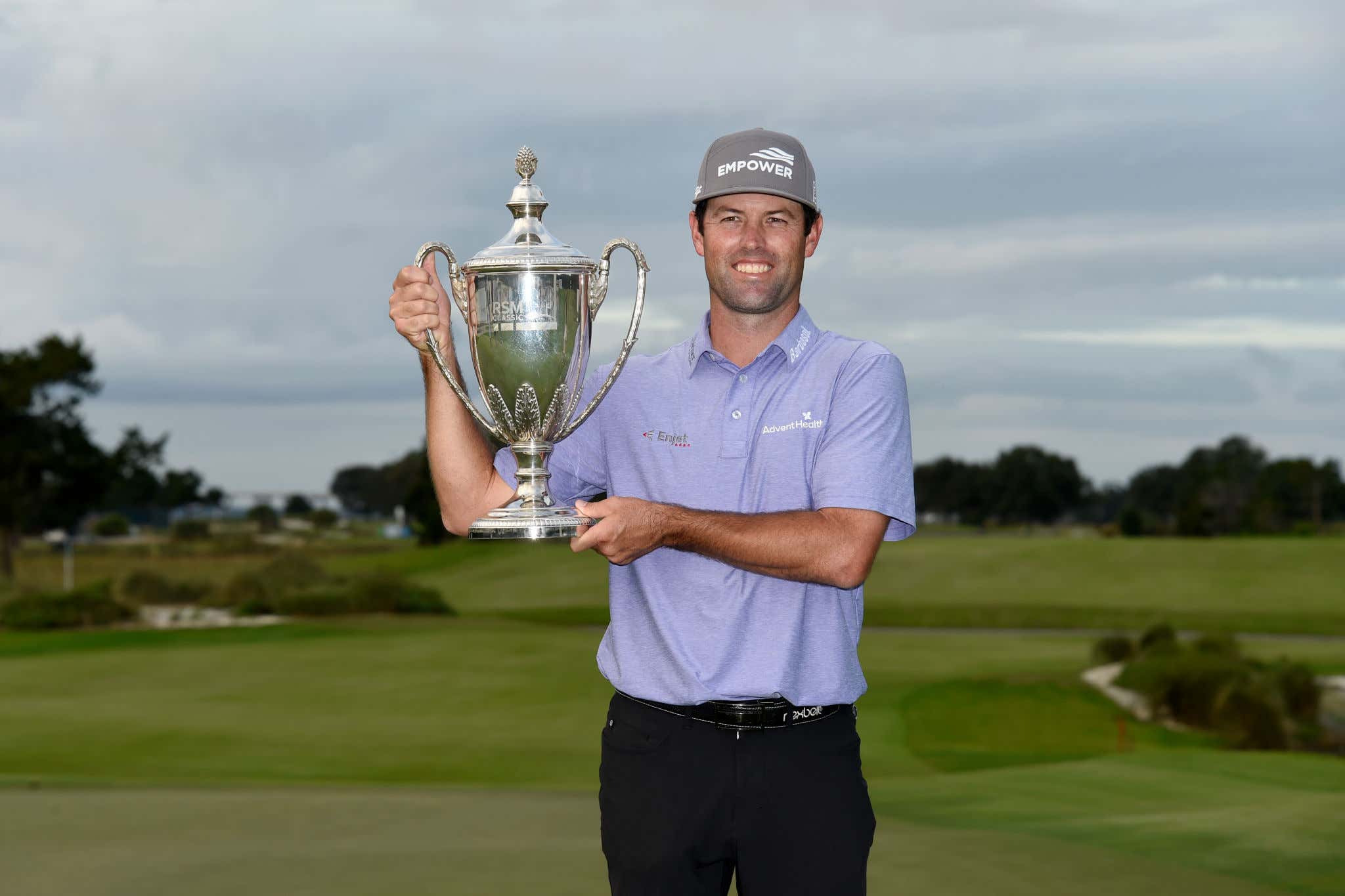 This trophy could not be more of a mail-in job by the folks at the RSM Classic. Zero creativity whatsoever. I suppose it's a tried and true design but at heart it's really just a very poor man's Wanamaker. Yawn. 3.8/10.

Scottie Scheffler is the betting favorite at the Barstool Sportsbook at +1100. He's the best player in this field by a decent margin, but I have some hesitancies given that his game leans towards a dependency on length versus the profile of former winners here who depend on accuracy. So he won't be my "official" pick, but he's still a good enough ball-striker to justify the weekly FOMO pick. I don't think it'd surprise anyone if he won because it's simply gonna happen for him before long.

I'm gonna go with Corey Conners at +2000 though. The guy is a phenomenal striker of the golf ball and had himself a very solid 2021 season despite not getting a win. This is a course that fits his game, and he's improved his results here every time he's played (37th in 2018, 23rd in 2019, 10th last year). He's steadily improved across the board in his career and I think this next season is where he takes his jump from a Top 50 player to a Top 25 player and a W would go a long way towards that.

Round 1 Sixshooter C - Charles Howell +335… former champ, like him against the guys in this group

Scottie Scheffler FOMO Pick +1100 - Not gonna miss out even if the odds are this short.

Lastly, shoutout to the Barstool Classic team on an extremely successful year running a top notch tournament. I had a couple friends qualify for the championship at Pinehurst and tagged along and everything they say about the event, about Pinehurst, about the Cradle, etc etc is true. Place is incredible and the team that puts that event on deserves all the kudos in the world. Bravo.