LaVine + DeRozan to score 20+ and the Bulls to win is actually the sharpest 3-sided prop I can offer you guys on a very chilly Monday night in Chicago. Some of you (a lot, actually) are not able to access this play. For that I'm sorry. This is the NBA exclusive in my jurisdiction and you better believe I'm sounding all the alarms on +160.

I'll concede a negative - the Bulls are coming off a big West Coast trip with a very emotional Sunday night Knicks game at home. Now again this is where you get the taste of brutal travel schedules. Even with 5-star hotels and private jets and chefs and all that shit. Go poke your head outside a window in Chicago right now and tell me that's a good situation. There's your negative against the Bulls. Kinda feels like shit and that's it.

Every other criticism is weak sauce right now. For a sliver there was some hesitation on the 4th quarter. We'll talk the Blazers game and follow up on some spirited comments from last week's podcasts. But we're also going to talk about DeRozan taking over against the Nuggets. We'll talk how much better they looked against the Knicks in less than a month. There's battling through Vuc's injuries and relying largely on an inexperienced bench. There's a bunch of shit and it's positive. At 12-5 and 1st place, there's no valid excuse to doubt the Bulls at this point.

You can see the pieces coming together each and every night on the floor. Now the reports are starting to come in about the rapport off it. Bunch of guys that just want to hang out and compete and go to a nice quiet dinner and make battle plans for dominating the rest of the Eastern Conference. To me that's the perfect mix of players to deploy under Billy D.

Tonight's one of those nights where they could and should just absolutely pound the Pacers. 13-5 feels a lot better to me than 12-6 but now I'm really being picky. End of the day I just like knowing that we're in a position to win just about every game so far this season. Crazy to think how close those Jim Boylen days really are. Here's to never having to live through that shit again.

Good luck to everyone who's riding on the Bulls prop tonight. My super computers in my underground laboratory actually priced it closer to +157 so take that for it is. 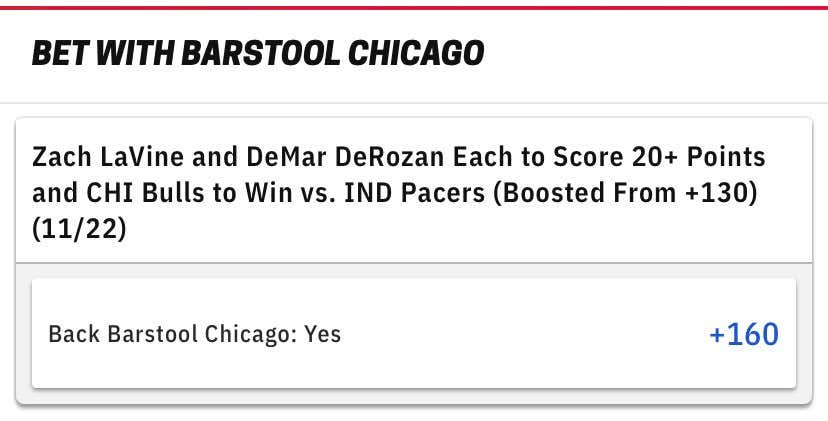 Subscribe to Red Line Radio if this bet loses