2-3 last week moving us to 29-32 on the season. Up down, up down like Morgan Wallen every week this year. Brutal season. But I can feel the .500 breakthrough coming in my plums.

Here's who I got on today's slate.

This is indeed gonna be a fun one. My two favorite young QBs not named Mac Jones squaring off in Cincy, woo wee

The Chargers have been impossible to figure out this season. They came out flying, starting 4-1 with wins over the Chiefs, Raiders and Browns, then proceeded to go 2-4, only beating the below-.500 Pennsylvania teams. I don't think I trust them to go cross country for 10 a.m. local start and beat a good Bengals team. As much firepower as the offense has, it's the defense that has hurt the Bolts. The Chargers defense has given up 24-plus points in each of their last seven games, with the 31.3 points allowed average over that span ranking just ahead of the J-E-T-S. You aren't going to win or cover many games giving up 30+ a game.

Fun fact - The last time the Chargers went from one side of the country to the other for an early kick, they got run out of town by a Baltimore team that hasn't blown anyone out since.

Cincy on the other hand, is 2-0 since the bye, outscoring the Raiders and Steelers 73-23. Their offense looks back on track and has scored 31-plus points in five of the last six games, only missing during the shocker vs. the Browns in Week 9 before the bye.

The Bengals' 31.3 PPG average since Week 6 is second-best in the league behind the Colts.

Joe Mixon, who has 288 yards and four TDs on the ground over the past two games, is as hot as any running back in football not named Jonathan Taylor, and now faces a Chargers defense that is dead last in the NFL against the rush.

The analytics and Brandon Staley's press conferences say the Chargers' offense isn't struggling. It's the Chargers' defense that can't get off the field, leading to the fewest drives in the league for the Justin Herbert-led attack. Both offenses in this game figure to go on long drives. The Bengals give up the short passes Herbert throws, while the Chargers' defense gives up most everything, especially the rugged 5-yard runs Joe Mixon likes.

If Cincinnati gets hot early and jumps up on the Chargers lookout, could be a double-digit home win. 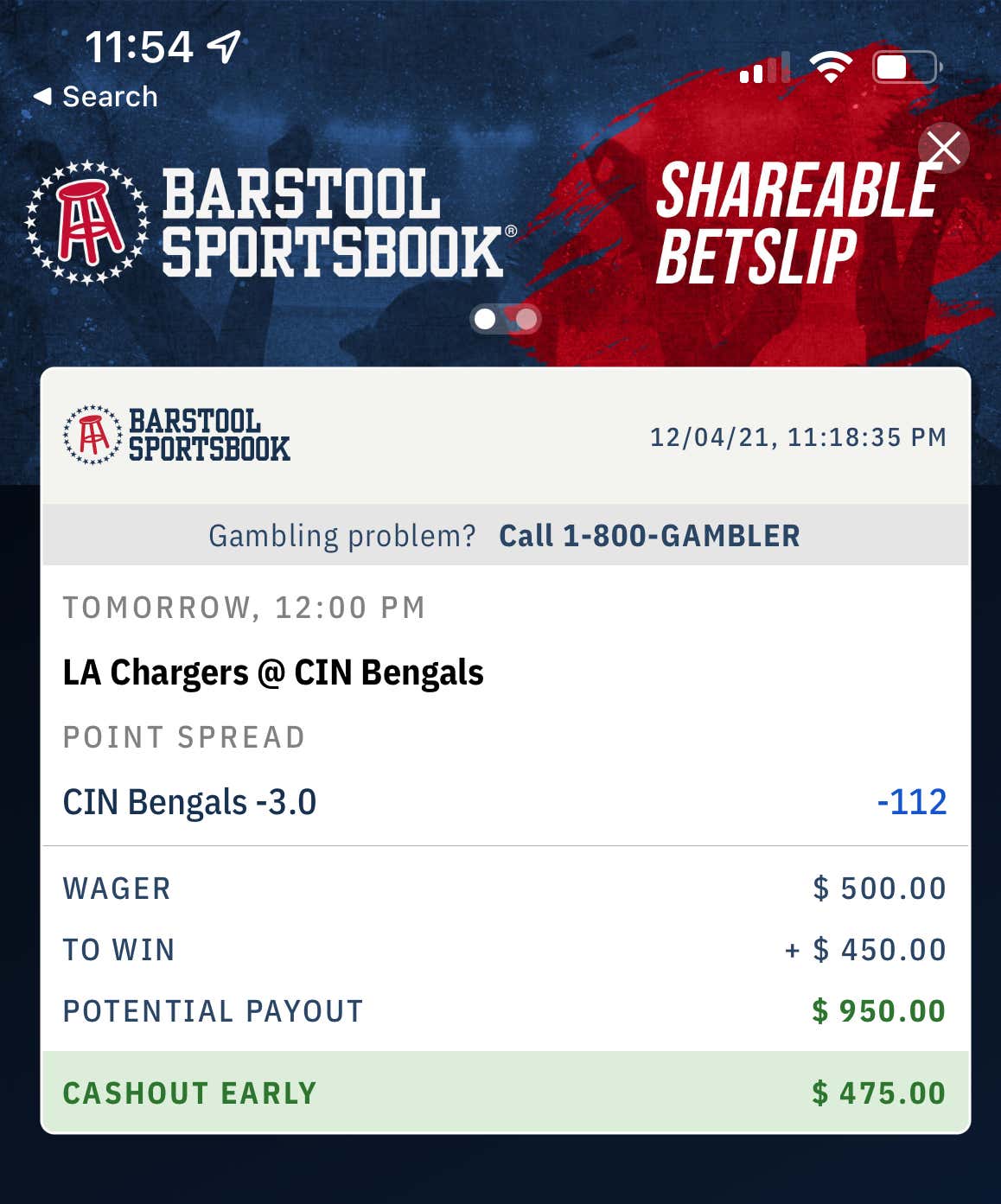 K.C. is not set up to employ that same approach, while the Broncos are designed to limit the Chiefs' explosive passing attack. Teddy Bridgewater is 19-3 ATS as a road dog. He has an explosive rookie in his backfield, RB Javonte Williams, and a talented group of receivers.

Although the Chiefs are rolling and coming off a bye, Bridgewater can keep this one close.

Nice job by Denver winning last week to make it more interesting. We know what we're going to get from the Broncos' offense, short on offensive tackles, against a revived Chiefs defense. They'll be passable, they'll break tackles in the running game and they'll probably play close to a draw.

This year we have no clue what we're going to get from either the Chiefs' offense or the Broncos' defense, two of the highest-variance units in the NFL. Both are all over the place.

An improving Denver pass rush suggests that the best way to beat the Broncos is to run at their lightweight crew and avoid their talented secondary. Andy Reid, however, is not a man to do the obvious, especially coming off a bye.

The recent "resurgence" of the Kansas City offense isn't quite as "back" as we want to think. The Offensive DVOA of 24.2% over the last two games is very good, but it doesn't equate to the Chiefs we've known over the past few seasons.

What's really going well for the Chiefs is actually their defense. Believe it or not, since Week 6, DVOA says the Chiefs have had the second-best defense in the NFL behind the Patriots. If you've watched them play you know that to be the case.

That's definitely enough to make the Chiefs the clear favorite in this game, but 9.5 points is a pretty big line against a very average Broncos squad.

Buy that extra half-point to make the line of +10 just to be safe. Nothing worse than losing on a hook.

FUN FACTS - The Chiefs offense has scored 20 points or more once since Week 6, and last week the Cowboys' defense held them to three points in the second half. Denver's defense is allowing less than seven red-zone plays per game, and Vic Fangio has Patrick Mahomes' number. Mahomes has two passing touchdowns in three games against Fangio's defense. 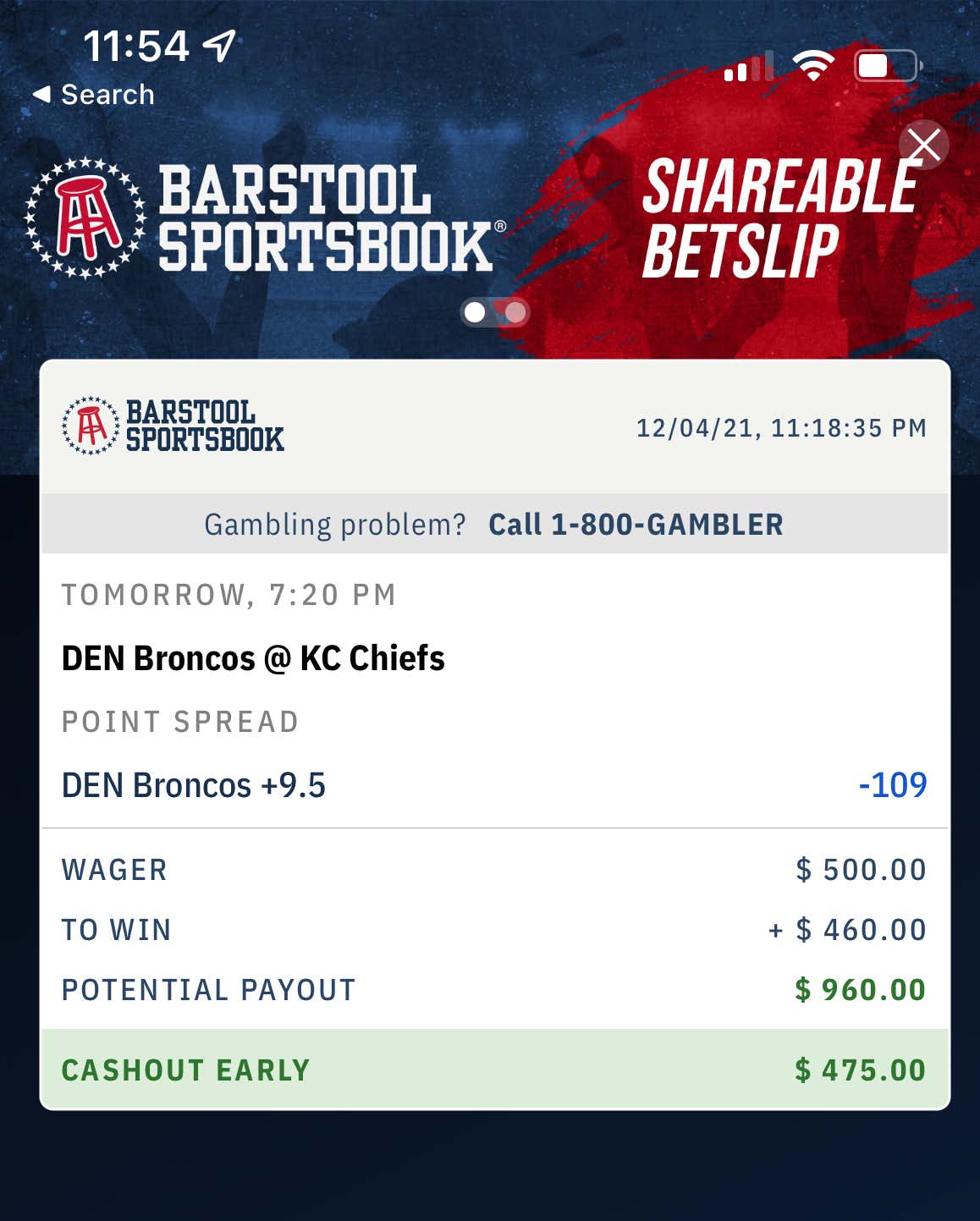 Matt Ryan and the Falcons benefited greatly from the return of Patterson as a runner and playmaker last week. The Falcons didn't have to rely on the passing game against the Jaguars, but that won't be the case against the Bucs. With no Julio Jones to worry about anymore, and Calvin Ridley away from the team (personal reasons), defenses have prioritized taking away stud tight end Kyle Pitts.

The Falcons' second-year cornerback A.J. Terrell has been one of the best at his position this year. Rarely targeted by opponents and beat for a completion rarely (42.7% of passes thrown at him, according to NFL's Next Gen Stats), he has a chance to garner attention facing one of the league's top receiving duos in Tampa Bay with Mike Evans and Chris Godwin.

The Falcons cut the Buccaneers' lead to three late in the third quarter when these teams first met in Week 2 before Tampa rode a wave of turnovers to a 48-25 win. That is typical of this veteran-laden Bucs squad's season. They take a while to warm up, then become undeniable. Cornerback Carlton Davis will help a secondary led by a quiet All-Pro-quality season from safety Antoine Winfield Jr. 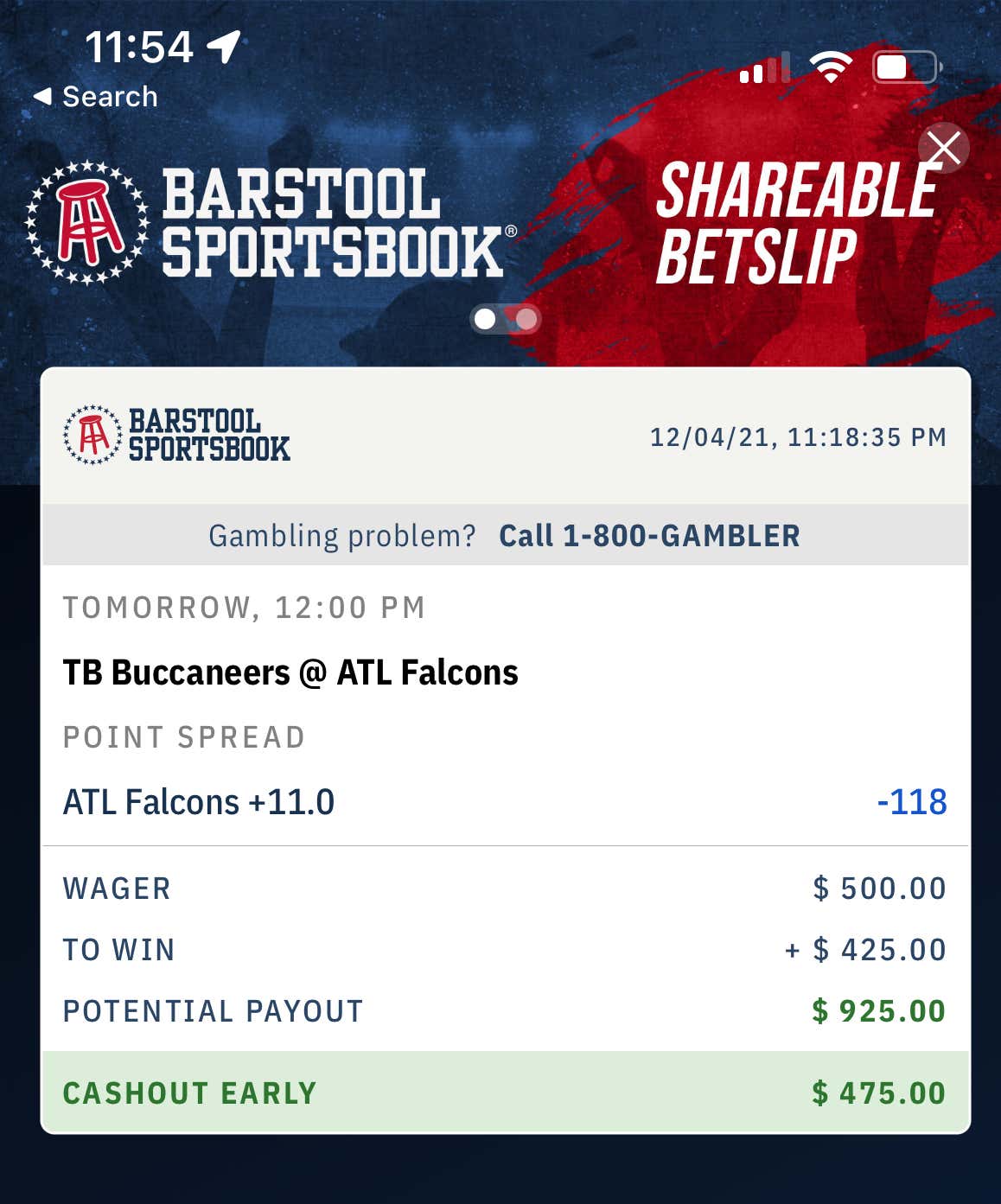 The Vikings have won 8 straight against the Lions.

Today's offenses are without both Dalvin Cook and D'Andre Swift. The Vikes can score a little without Cook, but the Lions are helpless minus Swift. Since their bye, the Lions' defense has been meh. The same cannot be said of the offense, and the byproduct has been games of 32, 23 and 30 points. In the earlier matchup, the teams combined for 36.

This feels like the perfect scenario for Jefferson to go the fuck off. We could see a 160 receiving yards and two touchdown day from him.

Jefferson had a day against Detroit in the Week 5 matchup between these teams, going for 124 receiving yards on seven catches.

The Vikings are 4-0 when Jefferson has 100 receiving yards and 1-6 when he doesn't, and Minnesota will lean into a pass-first attack with Cook sidelined.

It's been impressive watching how Mike Zimmer has kept his defense looking like the usual Vikings unit despite injuries. This is the right week to be without Patrick Peterson.

This Lions offense has topped 19 points just one time this season (Week 1 vs. San Francisco). Not surprisingly, the under has cashed in eight of Detroit's last nine games. So if you don't like either side, that's a solid play. 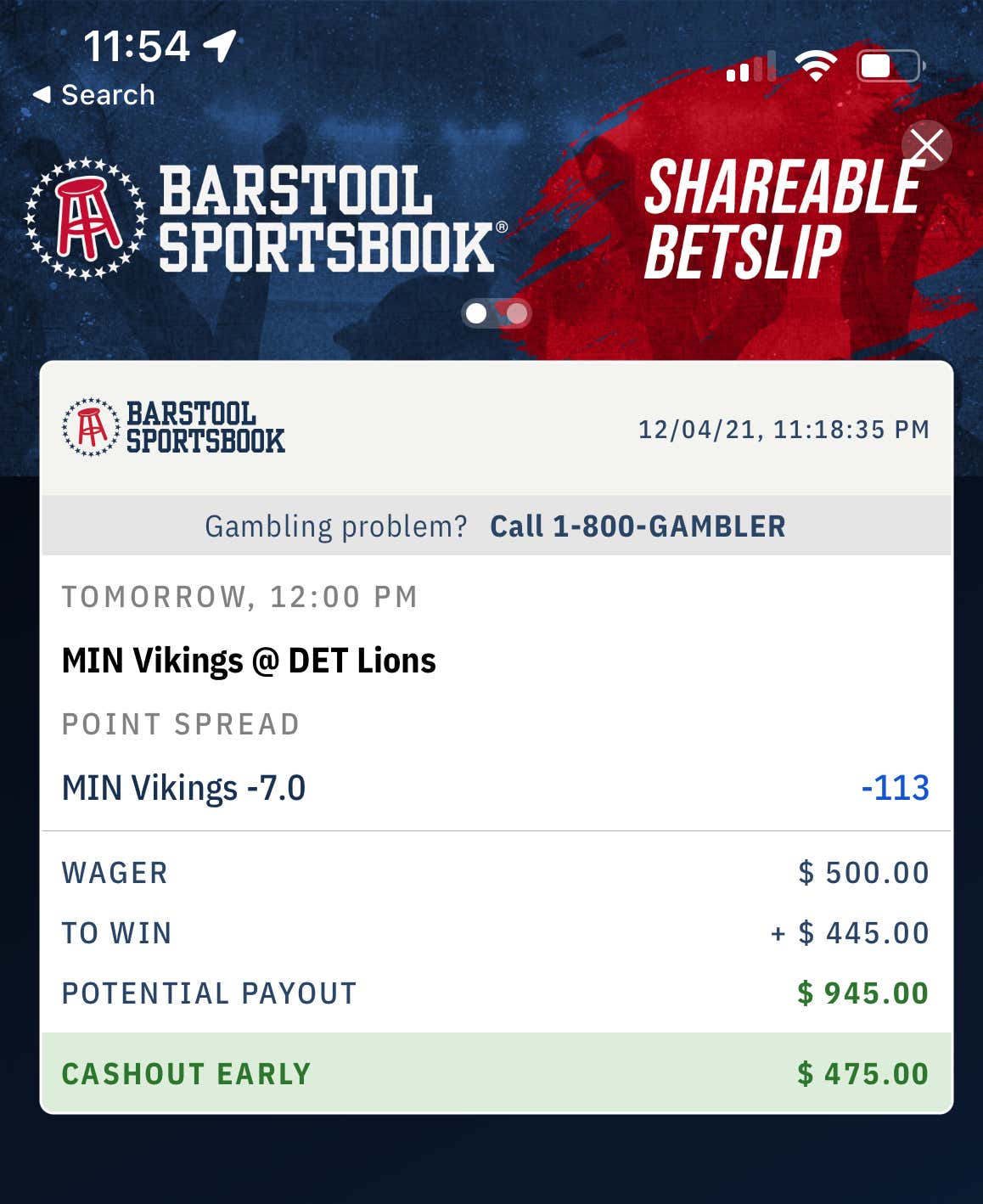 No, it's not snowing, but it'd be better if it were because this freezing rain is way worse.

The Cardinals are 6-0 on the road this season and have won each road game by 10 points or more.

The Cardinals have a road scoring differential of plus-101.

Justin Fields is a scratch with rib injuries, leaving veteran Andy Dalton in charge of a pathetic offense also missing WR Allen Robinson. As for Kyler Murray, he and WR DeAndre Hopkins have logged limited practice time, so the needle is leaning toward them finally playing.

The rest of the Arizona roster is well-rested coming off the team's bye week. The Cardinals currently rank fourth in the NFL in scoring defense (18.4 PPG) and sixth in opponent yards per play (5.3).

On the road this season, Arizona is 6-0 both straight up and against the spread while beating the closing spread by an average of 18.6 points per game! That's not how many points the team is winning by, it's how many points the team is beating the spread by. Good luck to the Bears, who currently rank 29th in the league in both scoring and yards per play. 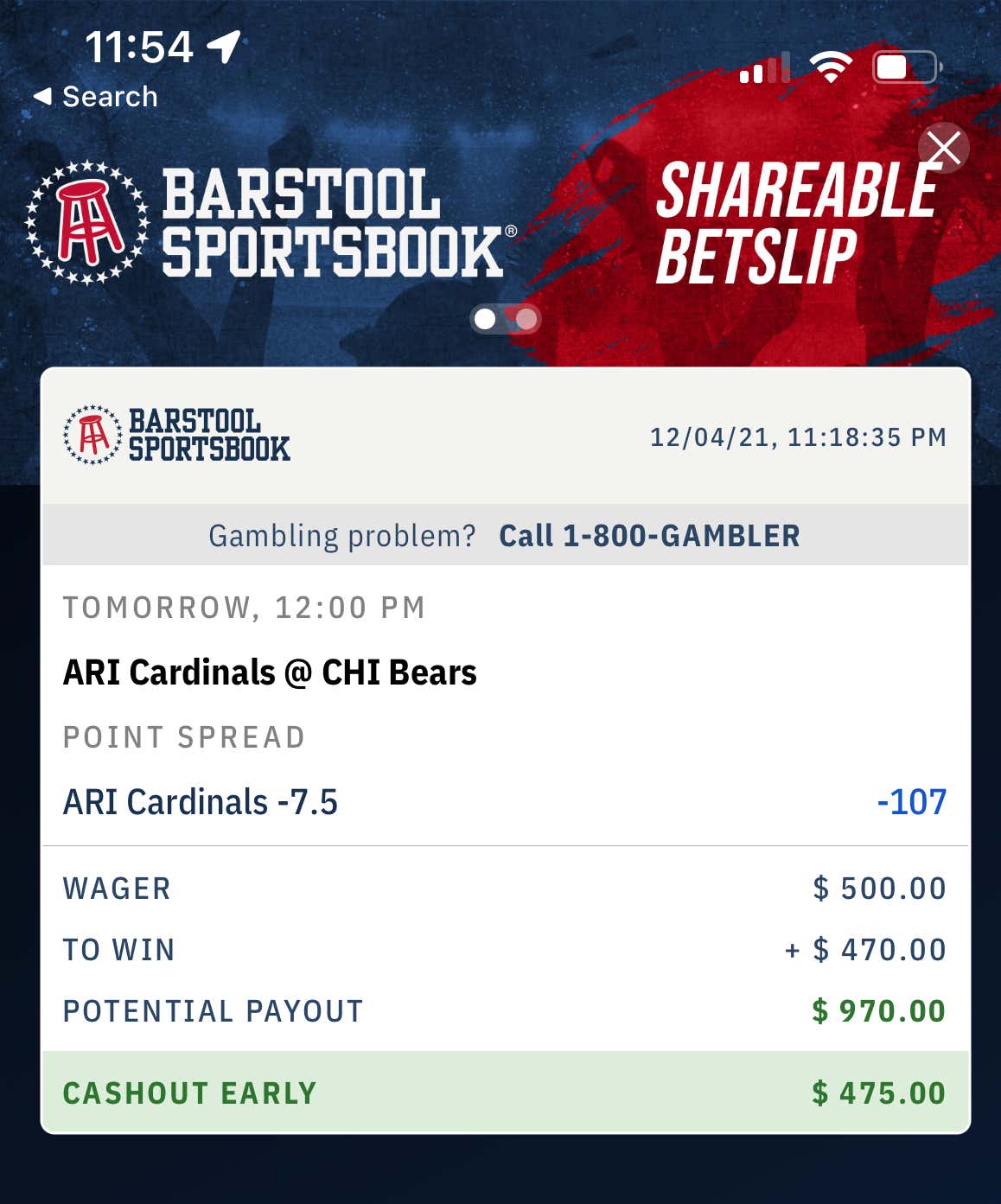 and Marco's picks - (Waiting for update)