*Correction, atrocious 1-4 last week moving us to 30-36 on the season. I wanna gag. Worst part this season is you can't even fade me because you'd still be treading water right around .500. Miserable.

Here's who I got on today's slate. Do what you will with them.

San Fran lost all the momentum from a three-game win streak by losing at Seattle last week. They face a rocky Bengals squad that lost 41-22 at home to the Chargers last week after beating the Steelers 41-10 the week before, also at home.

The Bengals have home run play abilities but have dropped three of their last five, one of those to the J-E-T-S.

But it's a real tough spot for the 49ers with a cluster of injuries at RB and CB, not to mention their first back-to-back road trip this season and third road game in 22 days.

San Francisco is 0-3 ATS on turf this season.

Cincinnati will be getting back both starting tackles after they missed last week's home loss.

The Bengals, whose defense ranks fourth in the NFL against the run, are 6-1 ATS following a double-digit loss at home. 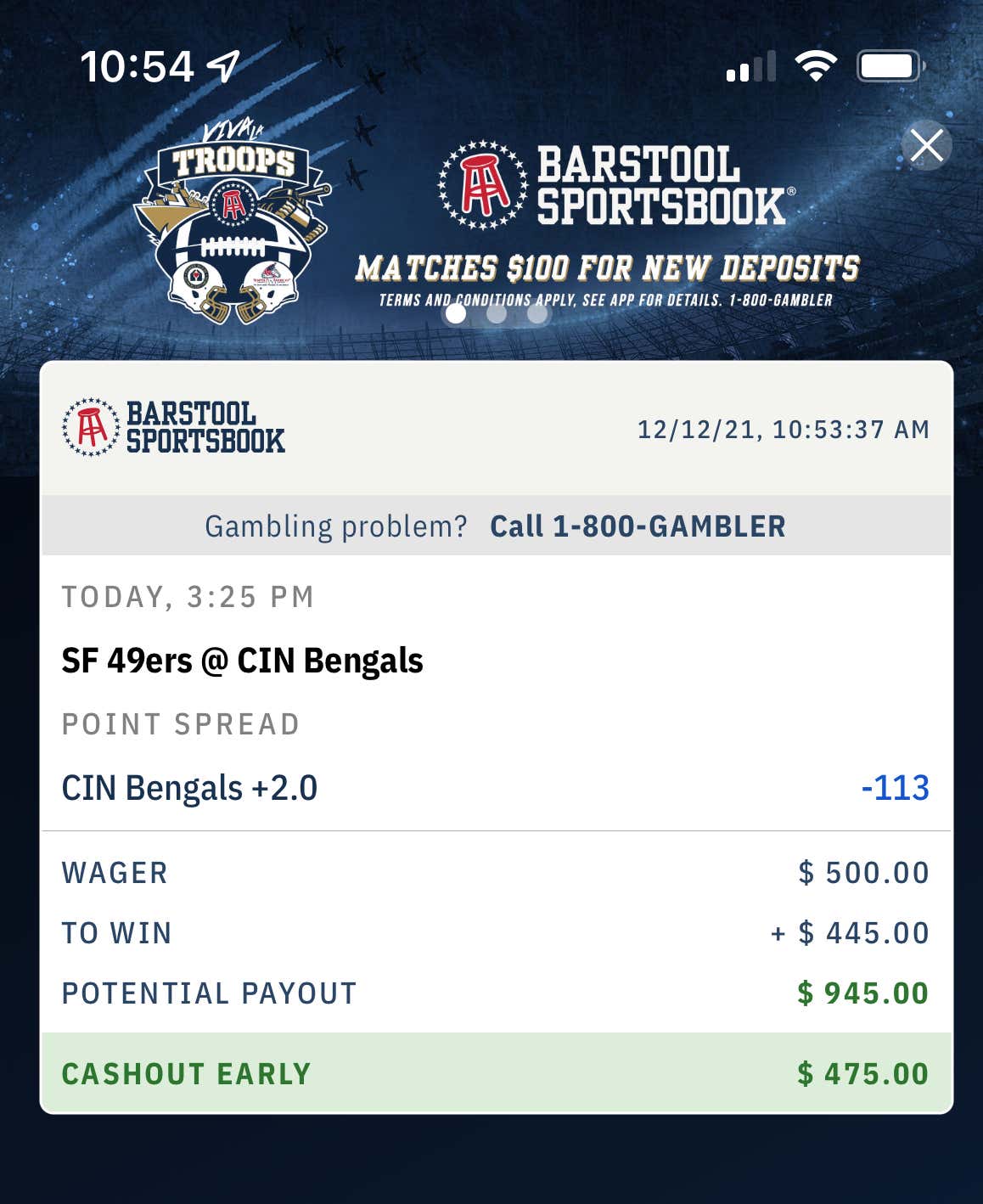 It looks like Mike Glennon, Sterling Shepard and Kenny Golladay all will play, giving the Giants a chance to be competitive against the Chargers.

LA is dealing with a COVID outbreak and tends to play close games anyway.

The Giants have allowed only 16 points per game over their last six, so if the defense can hold up again, you don't need a ton from this putrid offense. Against teams in the top half of the league in pass defense (by DVOA), the Chargers are 0-4 straight-up with Justin Herbert throwing more INTs than TDs. Not expecting a Giants' win, but taking the points. 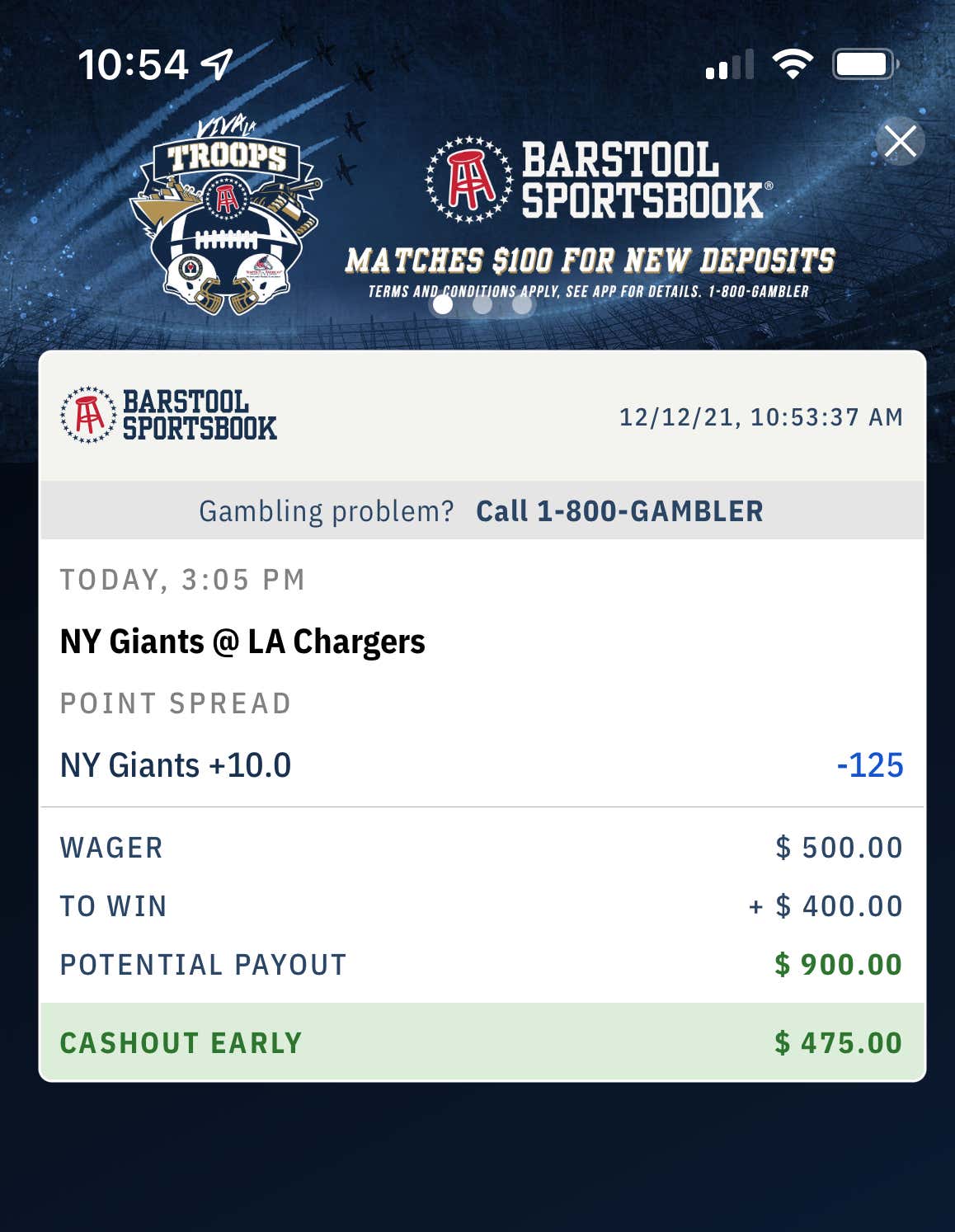 Just as it did last season, the Washington Football team has put itself in playoff position. Washington has won four straight games but has seen a dip in offensive production in their last two.

Expect the Cowboys to use playing consecutive Thursday games to their advantage. That's ten days off for Dak and co. if you're scoring at home.

WFT has been scorching hot since its bye, but this game sets up better for Dallas. Even with Tony Pollard (foot) a game-time decision, Dak will be able to lean on a rested Ezekiel Elliott plus all three of his starting receivers. Expect the Cowboys to click offensively like they did to start the season. Demarcus Lawrence and Randy Gregory, playing together for the first time since Week 1, should join Micah Parsons in having a big game vs Washington's banged-up offensive line.

Taking the Cowboys who have covered seven straight vs. the NFC. 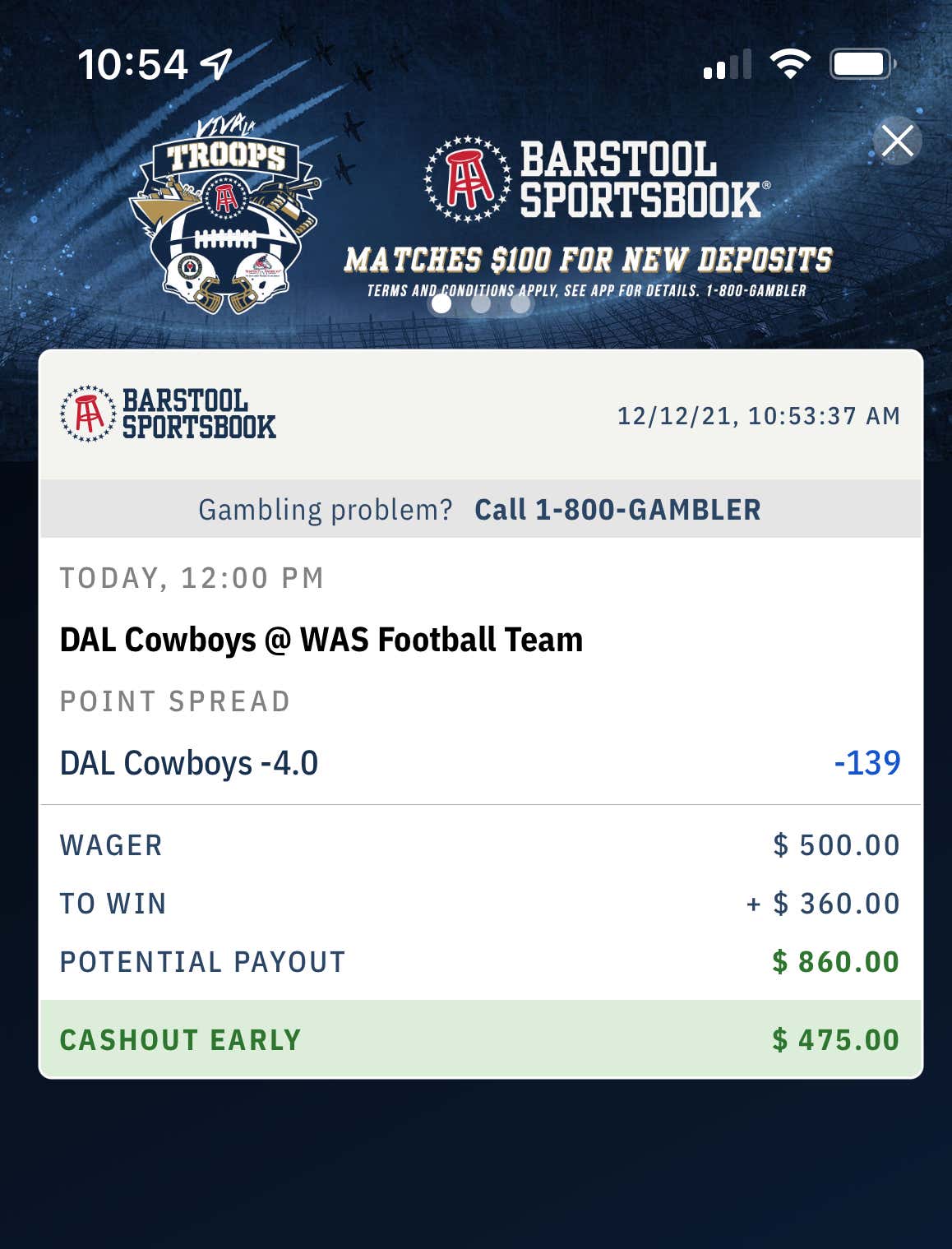 The Bills have lost four of their last seven games and come into a dominant den in Tampa Bay, where the Buccaneers are 5-0 (4-1 ATS) with a 38-16 average score.

The Bucs have looked vulnerable on the road, but at home they're solid.

It feels like the Bills are a roller coaster team to cap this season but take a deeper look at their offensive output in the last four games. 10 against the Patriots and 15 against the Colts compared to 31 against the Saints and 45 vs. the Jets. Long story short, the Bills are 1-4 SU this season against teams with a winning record. Josh Allen has nine turnovers in his last five games. How are the Bucs at home this season? I'll ride with TB12, the owner of the Buffalo Bills, in this one. 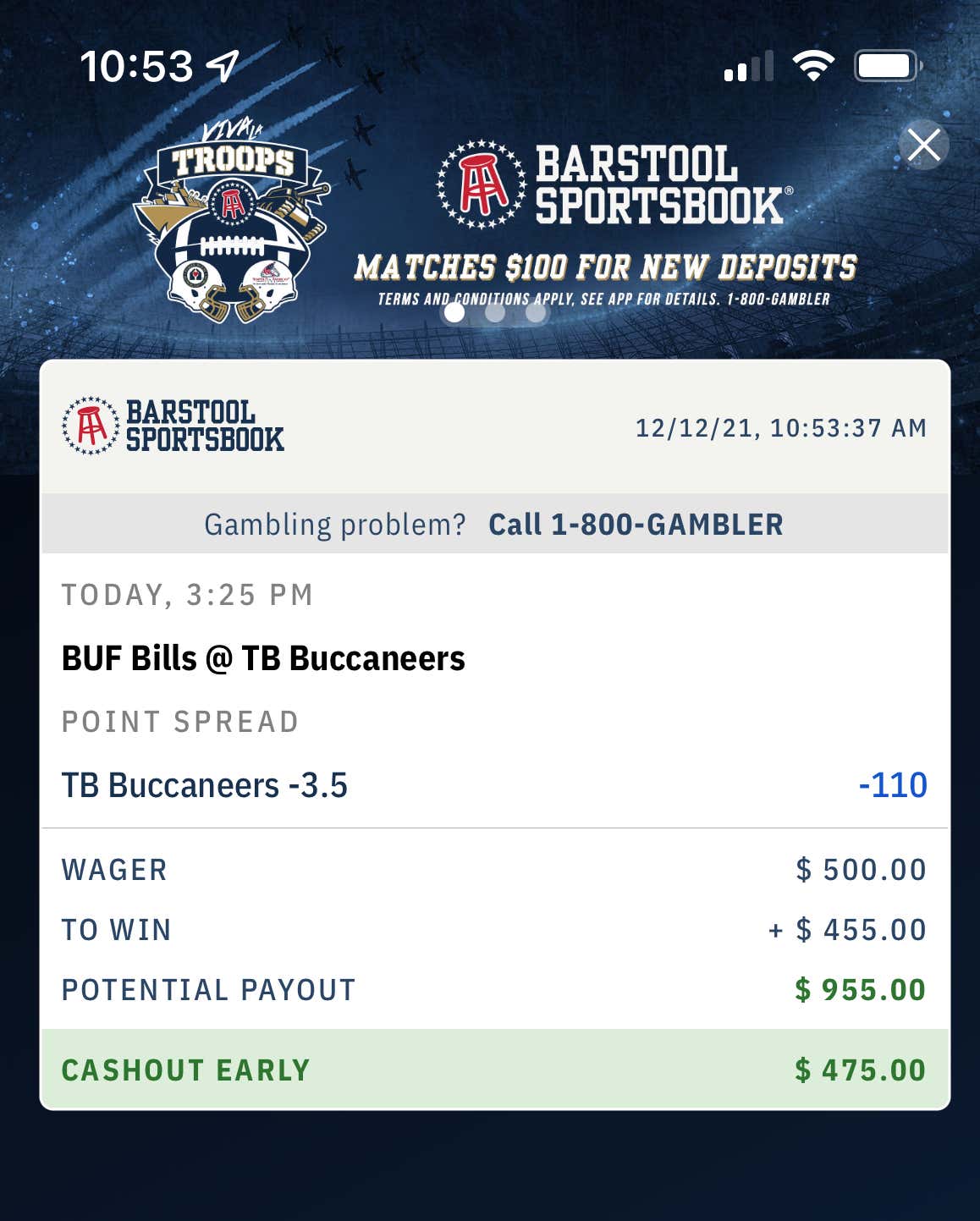 This line briefly came down to 7.5 before steaming to 10 on Thursday as bettors buy in to a Lions hangover following their first win of the season

The Broncos (6-6) are a quarterback away from truly contending. Bridgewater can lead the team under ideal circumstances, but in less than perfect scenarios, his mediocre play is wasting a talented crop of skill-position players and a respectable defense. The Lions finally won a game last week after having been on the verge of other victories that they squandered with untimely turnovers and bad luck. Detroit has played competitively against teams that are better than Denver, but traveling to Mile High… listen, I can try to talk myself into Denver as much as I want. My brain is telling me Detroit is the play here, and it's been bad this season, so I'm going with my gut and the Broncos. 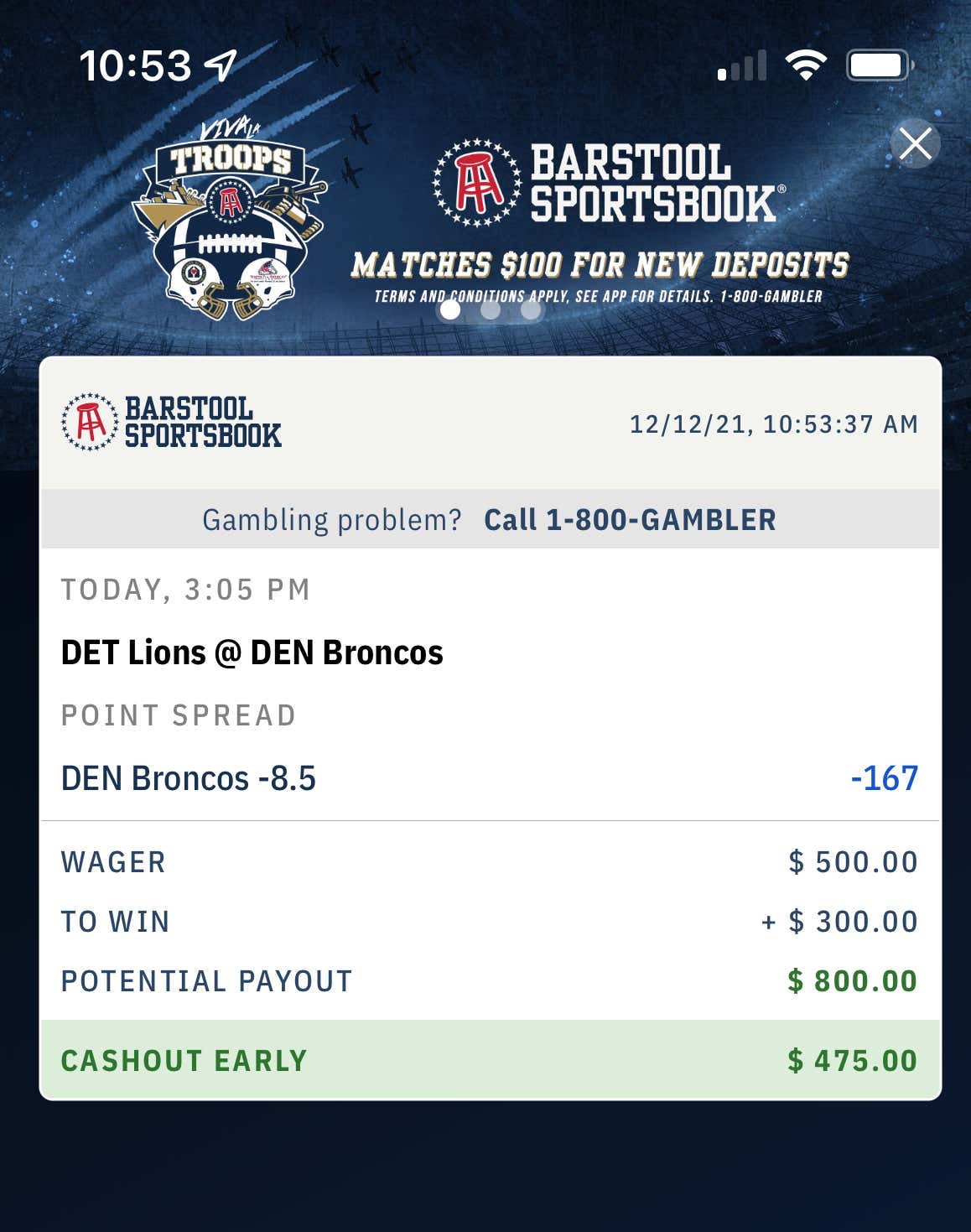